In 1995, nerds and geeks worldwide were largely still spending time in darkened bedrooms and basements. There was this brand-new thing called the World Wide Web, and gaming was showing the early signs of what we recognize today. Video game consoles were still largely the gaming devices of choice—the Sega Genesis and Super Nintendo were thriving, and by the end of the year, the original PlayStation would appear. PC gaming was also starting to gain more ground, with CD-ROM games on the PC offering a more immersive experience than the 16-bit consoles of the time were capable of providing. Hollywood, of course, paid attention.

In an effort to get the nerd out of the basement and into a cinema, several studios decided to try to capitalize on a version of the future that would see gaming and “hacking” the more nefarious parts of the internet go mainstream. We had seen the deeply flawed The Lawnmower Man (Brett Leonard, 1992) three years earlier with its at-the-time dazzling depiction of virtual reality. In short order, in 1995 we got Iain Softley’s Hackers, Leonard’s Virtuosity, Kathryn Bigelow’s underrated masterpiece Strange Days, and a sequel to The Lawnmower Man subtitled Beyond Cyberspace directed by Farhad Mann that was apparently unwatchable. 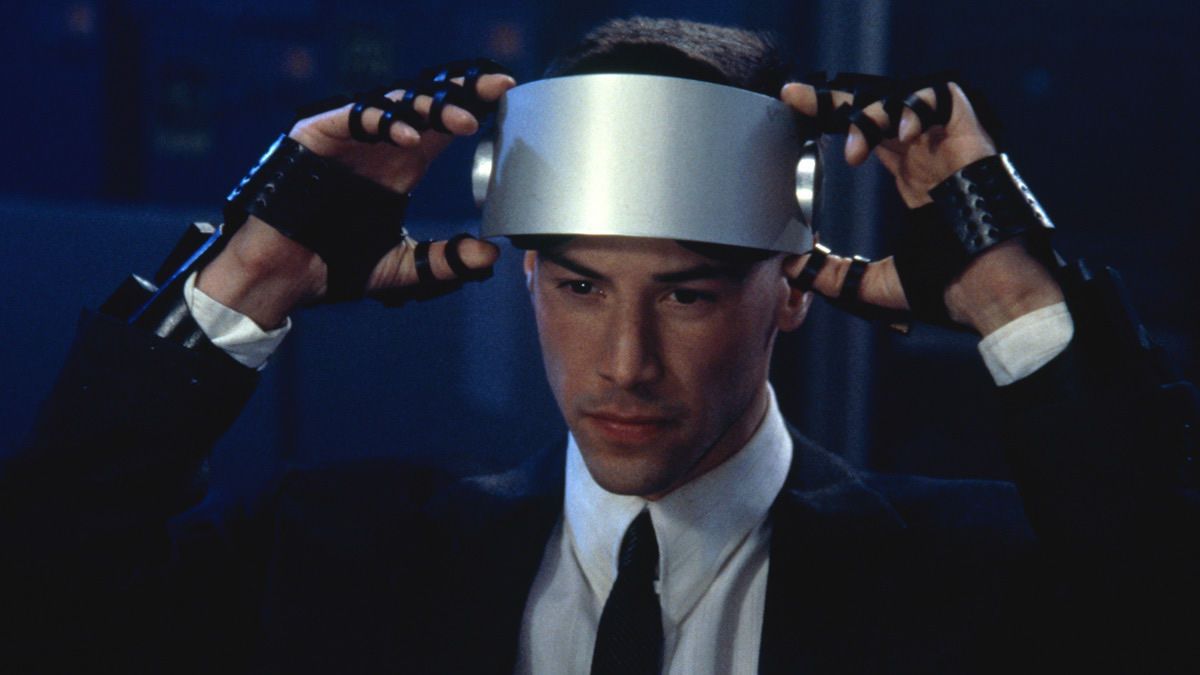 Hollywood had, at this point, nearly exhausted all of the Philip K. Dick stories (Total Recall, Blade Runner) it could misunderstand and turn into glossy action flicks, so it needed a new author to mine for material. In 1984, William Gibson published the seminal science-fiction novel Neuromancer, and a sub-genre was born. Winning several awards, Neuromancer struck a nerve with the nerd populace. Here was a story set in a plausible future that seemed to predict a human reliance on technology, corporate control, and the underground criminal element that resisted this. It was somewhere between a great work of literature and a trashy noir thriller. It was, quite simply, something new and exciting.

Gibson’s work is not the easiest to adapt to the screen; it’s not actually the easiest to read for the casual reader. It took me about three tries to get through Neuromancer the first time, and the film version has been in development hell for close to 40 years. Luckily, Gibson had a collection of easier-to-digest short stories, Burning Chrome. One of these shorts was “Johnny Mnemonic,” and it became the first Gibson work to be adapted into a movie. Originally it was conceived as a low-budget mood piece rather than an action movie, with a budget in the low millions and filmed in black-and-white. Val Kilmer was at one point attached to the title role, and visual artist Robert Longo was signed to direct from a screenplay by Gibson himself. It was not the first time Gibson had flirted with Hollywood—his was one of many versions of Alien 3 (1992) that was abandoned. Once Keanu Reeves, then hot after Speed (1994), signed on the dotted line, the budget ballooned with the backing of a major studio.

Johnny Mnemonic takes place in 2021 (that’s next year!) and finds “mnemonic courier” Johnny (Keanu Reeves) living a selfish existence in and out of hotels being paid a fortune to transport sensitive data in a wet-wired brain implant in his head. Due to the space needed to complete this task, Johnny had to dump a chunk of long-term memory and thus has no memory of his childhood. However, he has almost raised enough money to have it restored through an operation, and his agent, Ralphie (Udo Kier), convinces him to do a lucrative last job for mysterious people in Beijing. Johnny takes the job and uploads the data, even though the size of it exceeds his storage capacity in terms of gigabytes. The yakuza show up and kill his clients, who it turns out have betrayed the corporation Pharmacom, and Johnny narrowly escapes back to Newark as the data causes him intense pain and threatens to kill him. As the yakuza and a cybernetic street preacher/bounty hunter (Dolph Lundgren) close in, Johnny teams up with an assassin afflicted with Nerve Attenuation Syndrome (NAS or the “Black Shakes”) named Jane (Dina Meyer) who leads him to underground cyber doctor Spider (Henry Rollins) and the Lo-Teks led by J-Bone (Ice T), who might be his salvation. 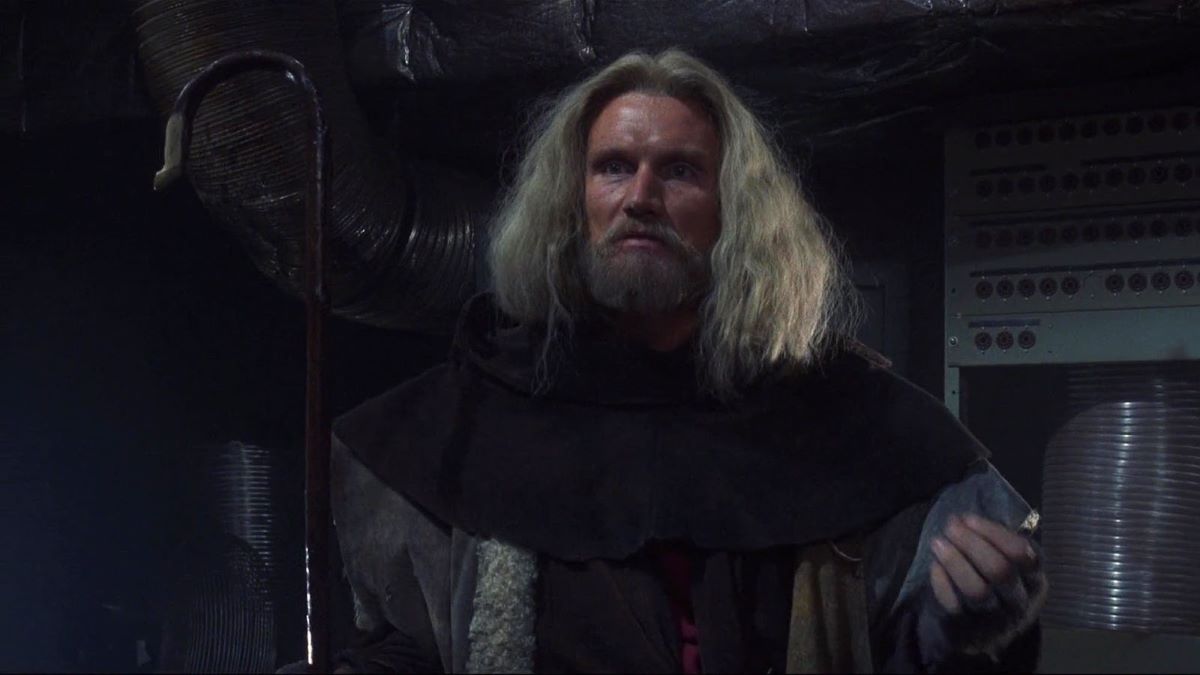 Somewhere between Keanu’s growth in popularity, the budget going up, and studio interference, the intent behind Johnny Mnemonic was completely lost. I’ve tried and I’ve tried over the years, but I simply cannot defend this as a good film; it is not a good film. But I can pull things from it as a fan of William Gibson, mostly its depiction of the internet in the future and how it is navigated. You can see in a few fleeting moments (less so in the theatrical cut) that there was a low-budget meditation on memory and morality somewhere in there. Johnny is an asshole—when we first meet him he is just getting done with a high-class hooker—and seems to have a general attitude of unpleasantness and sarcasm towards everyone he meets. He is a character motivated by purely selfish reasons, but he is suddenly faced with his own mortality and an actual level of responsibility for the human race when it turns out what he is carrying is the cure for NAS. Keanu tries, but he is not served well by either the direction or the dialogue, and this is not one of his better antihero roles, aside from the much loved “I want room service” scene, which is legendary.

Total Recall had been a big hit in 1990, and several sci-fi films over the next few years chose to imitate it. Johnny Mnemonic sadly falls into this category, lacking faith in its own original murky underworld and shaky morality. It’s telling that the pre-release posters all had Keanu holding a gun, when in the actual film he holds the gun for about one minute. The production design and the hardware are straight out of Gibson’s work, and some further dwelling on this would have gone a long way. No amount of strange new worlds or stunt-casting can disguise a plot that is a simple man-on-the-run riff. Added to which, the decision to turn it into an action film with an untested artist at the helm works out about as well as you would expect. The action is poorly staged in every scene, oddly framed, and just never gets the pulse going the way it should.

At some point in the final moments leading up to Johnny Mnemonic’s release in May 1995, it was decided to trim 15 minutes from the running time and hastily record a brand-new score by Brad Fiedel (Terminator 2). As a result, the theatrical cut received by the West has major sudden lapses of coherence, especially towards the end when a certain junkie dolphin is introduced. Japan received the original cut of the film that has so far not been released in the West. This version has the original score by Mychael Danna and includes additional footage of “Beat” Takeshi Kitano (Battle Royale, 1999) as the bereaved yakuza boss. This version still isn’t a great film, but it is better. You can see more of the intent behind the film, and it feels like it flows better overall. This version isn’t widely available, but you can track down a copy if you know where to look. As this is the best cinematic representation of Gibson’s work we have so far (such as it is), I would strongly urge you to watch this version if you have to watch this film at all.

When the film was released, it was absolutely savaged by critics. “Johnny Moronic” was the headline, and people loved the fact that “dumb” Keanu was lumbering around moaning about his brain exploding. The film died at the box office, grossing just $6 million domestic in its first weekend off a $26 million budget. Robert Longo never directed another feature, but none of the cyber fantasies released in 1995 set the box office alight; its audience remained at home gaming on their PCs, and cyberpunk was declared dead until The Matrix reinvented the subgenre four years later. 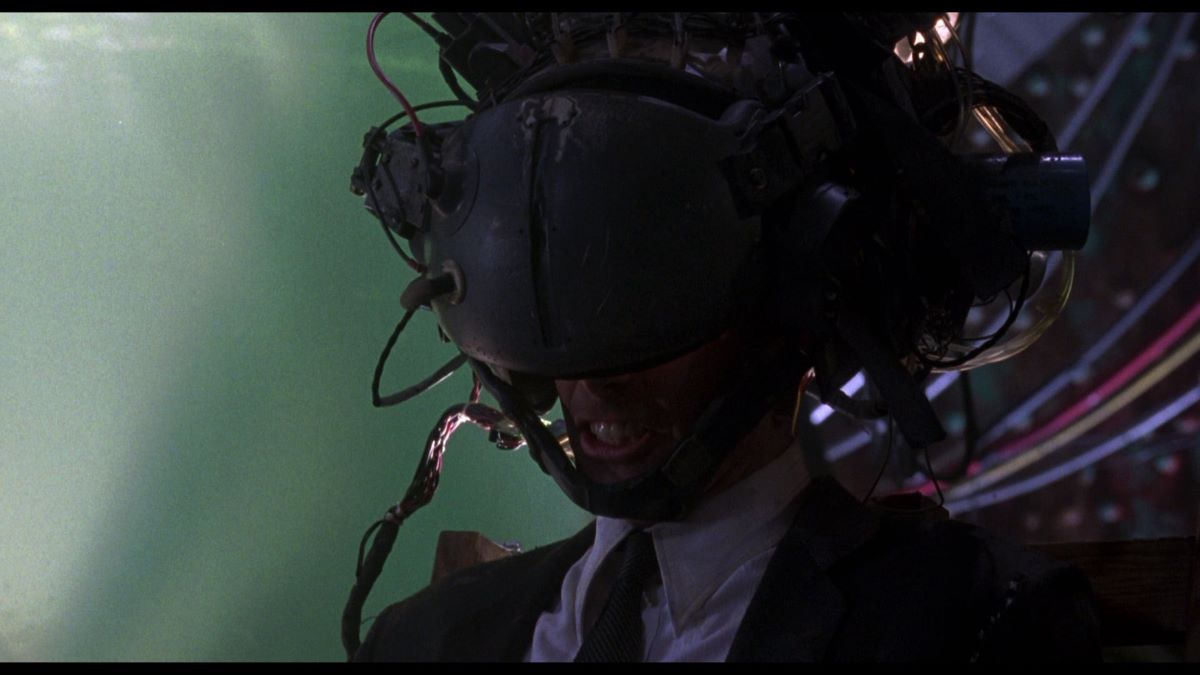 Cyberpunk as a subgenre and any potential William Gibson adaptations are in a strange place right now. Even though in a sense we live in that cyberpunk world Gibson wrote about with the Anonymous movement, WikiLeaks and the Facebook debacles, the concepts described in Gibson’s seminal genre work are kind of dated, and any straight adaptation has to reinvent the source material. Neuromancer lost director Vincenzo Natali (Cube, 1998) a few years back, and seems to be officially dead. Abel Ferrara (King of New York, 1990) adapted New Rose Hotel in 1998, and that film has barely been released. Adaptations of his more recent, less obvious sci-fi work have been mooted, and Pattern Recognition is likewise stuck in development hell.

It feels more and more that we are never going to get a true and successful adaptation of Gibson’s work, and Johnny Mnemonic is the most we can hope for. The concepts and themes of his work have influenced other filmmakers who have run with it and presented visions that feel fresh. I mean, nobody seems to have noticed but, Neill Blomkamp’s Elysium (2013) actually had the same plot as Johnny Mnemonic,  but presented the story in Blomkamp’s own version of the cyberpunk aesthetic mired in the downtrodden, collapsing world he has favoured in all his work. Blomkamp has a far better grasp of how to stage action and violence than Robert Longo, as well.

One day, maybe someone will find a way to do Gibson justice on the big screen. Right now, Johnny Mnemonic is an interesting failure, but a failure nonetheless, and a reminder of what could have been.