‘”Hey! Has Anybody Seen Billy?”: Audrey’s Missing Dream Lover’ is now available on Audio, read by author John Bernardy, exclusively for our Patreon supporters. For just $3 a month you will have access to our full library of Audio content, plus three new uploads every week. To sign up visit our Patreon page: https://www.patreon.com/25YL

Bing pokes his head into the Double R to usher in the Part 7 credits sequence by shouting this sentence: “Hey! Has anybody seen Billy?” The name Billy didn’t have any meaning before this moment, but it sure means something now: There’s someone named Billy, and someone is looking for him. Thus begins one of the stranger Where’s Waldo-style side quests of Twin Peaks Season 3. Did you see Billy when you were watching? Did anybody? Let’s go through what we know and find out. 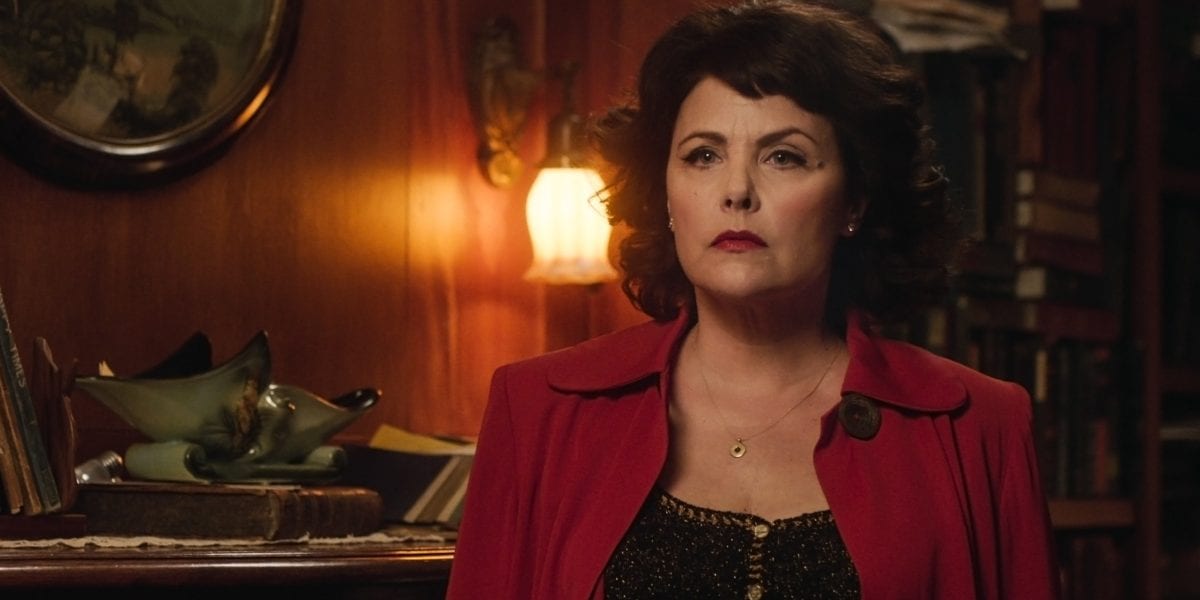 After Bing’s question, Billy’s name doesn’t come up again until Part 12. And of course, he only comes up to add confusion to the disorientation we were already feeling when we finally met up with Audrey after 25+ years.

What do we learn about Billy here?

What can we make of all this word salad? 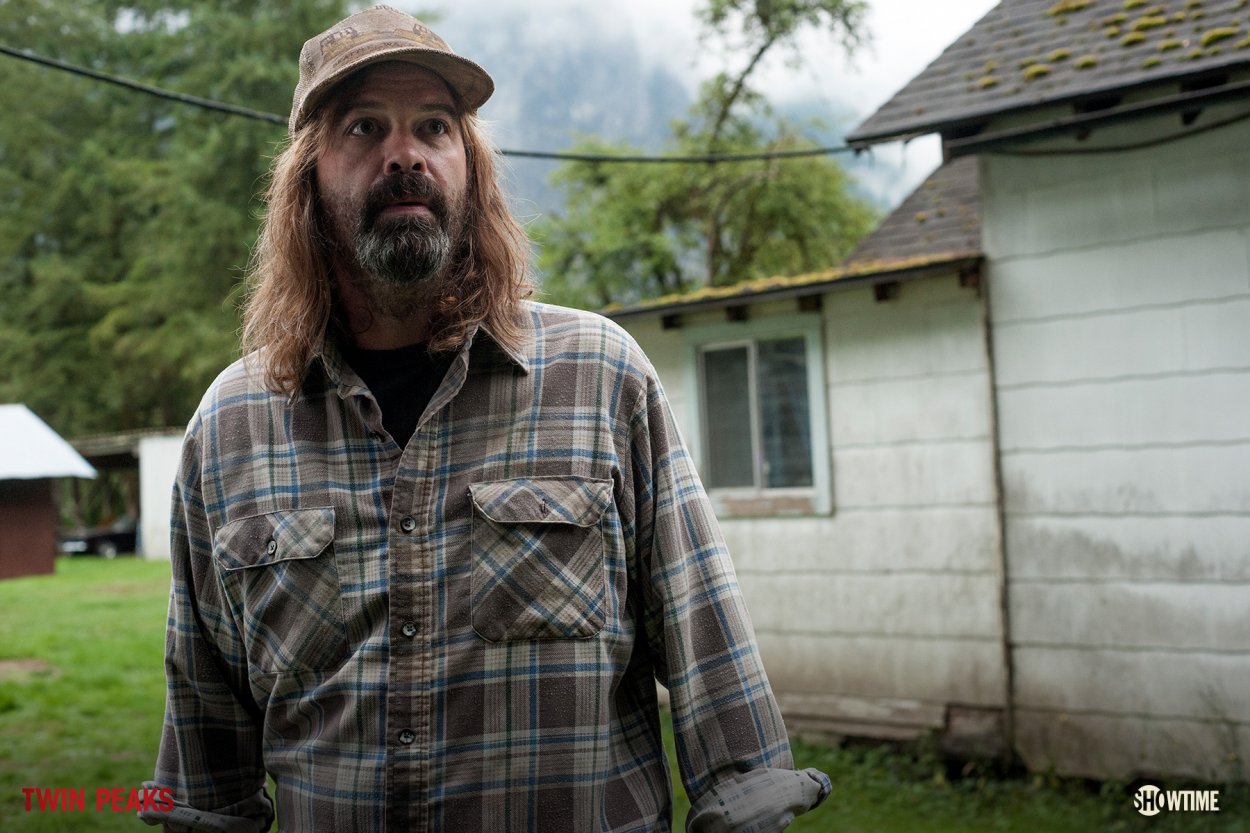 Now that we’re on the lookout for Billy, he comes up again a few scenes later in the same episode, though in a way more akin to misdirection. 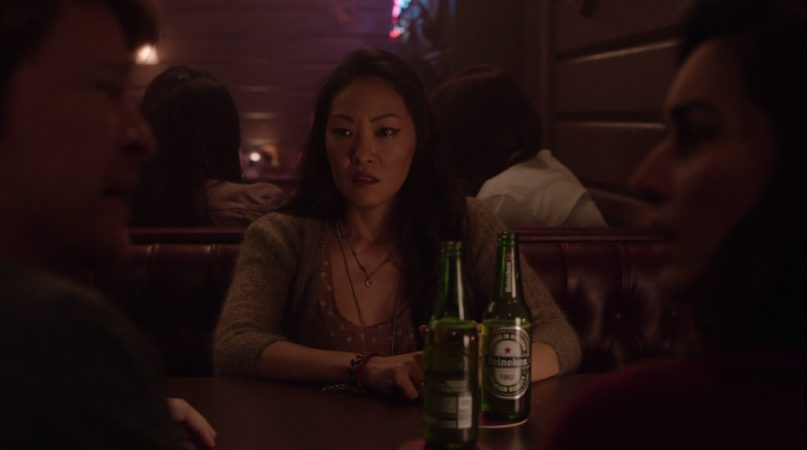 We’re in the Roadhouse watching Abbie and Natalie talk about Angela, another missing person. Angela’s probably off with Clark, who is super shady because he’s two-timing Angela with Mary. What does this have to do with anything? Not much, but Abbie and Natalie do know who Billy is. They mention how Billy hates Mary.

Is this a pertinent detail for Billy’s biography? Not at all. But it rules out Farmer as Billy’s identity as follows:

Billy is not Farmer. We’re back to square one. 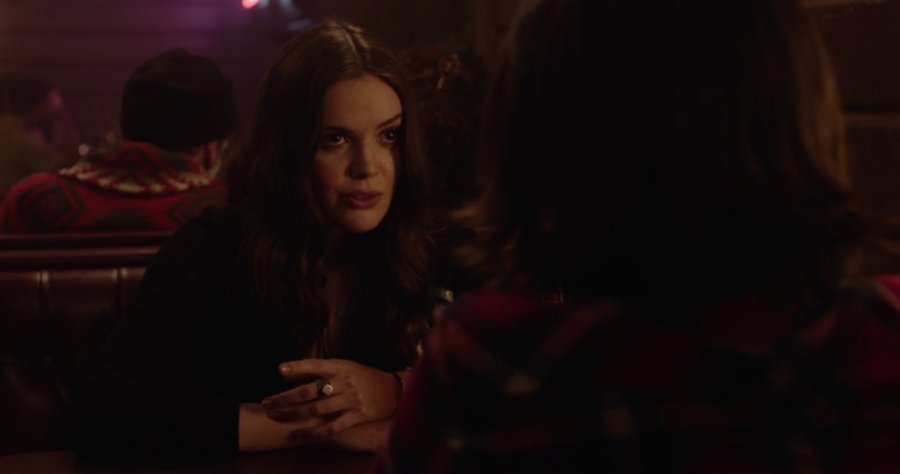 In another Roadhouse scene, Sophie and Megan discuss the missing Billy. Here’s what we learn:

We don’t move too far forward in tracking Billy with this scene, but it does anchor Billy more solidly to the Season 3 world already in progress. And just like how two scenes were paired in Part 12, there’s another connecting scene in Part 14. This time, the additional scene presents us with the most likely identity for Billy yet. 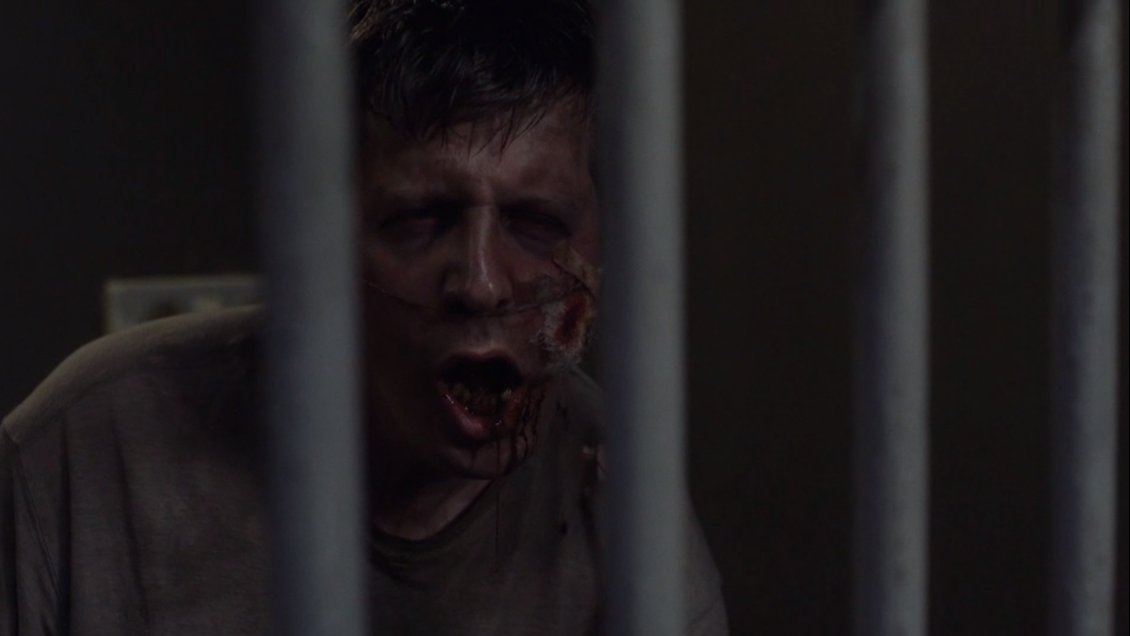 Disgraced deputy Chad Broxford is arrested and put in the basement holding cells. In addition to Lodge denizen Naido, there’s a third character in a cell: Drunk.

Drunk definitely looks worse for wear, and he has a loose bandage over an unhealed wound on his mouth. This is our Billy, right? He’s got all the earmarks, the visual ticks. The only problem is, he can’t say anything unless he’s parroting the words and noises around him. Which places him in Dougie territory. Why?

Because he still needs to wake up from that dream Audrey saw him in.

If this means he really is like Dougie in a one-for-one comparison, that means Billy’s not charged with the right kind of biological electricity to function on his current frequency of reality. He needs a proverbial fork in a socket to wake up where he belongs.

What method of shock would do that? I believe it’s when he begins peeling the bandage off his face in Part 17. After all, he disappeared right after he did that. He’s missing when Andy brings everyone upstairs. He didn’t wake up in the jail because he was barely there in the first place.

Billy’s from the dream. That’s where he went. 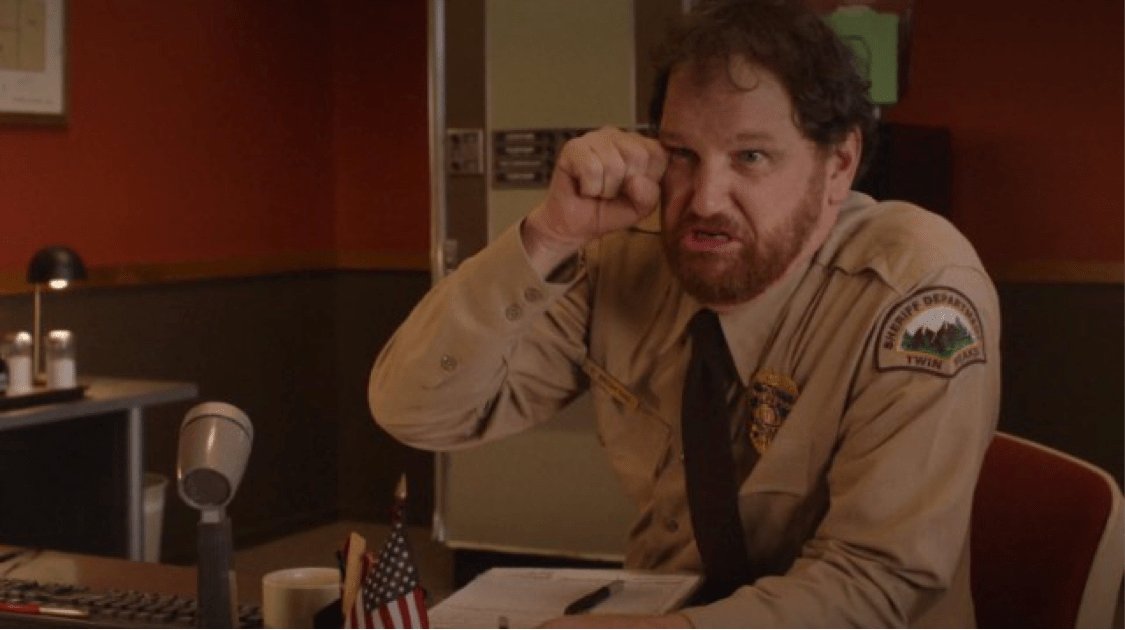 Chad is the only character in the jail cells who is shown in negative light. He’s also the only one who seems capable of seeing Drunk. They share a like frequency.

When I say frequency, I mean this: I’ve got a working theory that Season 3 is viewed from an in-between state of reality at the junction point between a positive real world frequency and a negative delusional dream frequency, and characters tune back and forth as they choose which state to exist within.

Using this logic, Audrey Horne at the end of Part 16 may want to leave the delusion and wake up, but she can’t. She’s stuck in the Lodge-adjacent dream state where she can only speak words when framed in a mirror, while the band she was just dancing to plays their song backwards. More on that later.

Chad—instead of joining the other guys in the light of day—was captured because he was working for the most negative figure of the whole season: Richard Horne. And Chad is the only one not oblivious to Drunk. Drunk is tuned to the negative dream frequency, because he’s Billy and he’s from there.

But does that make Billy a tulpa? Probably, but I don’t think that matters. 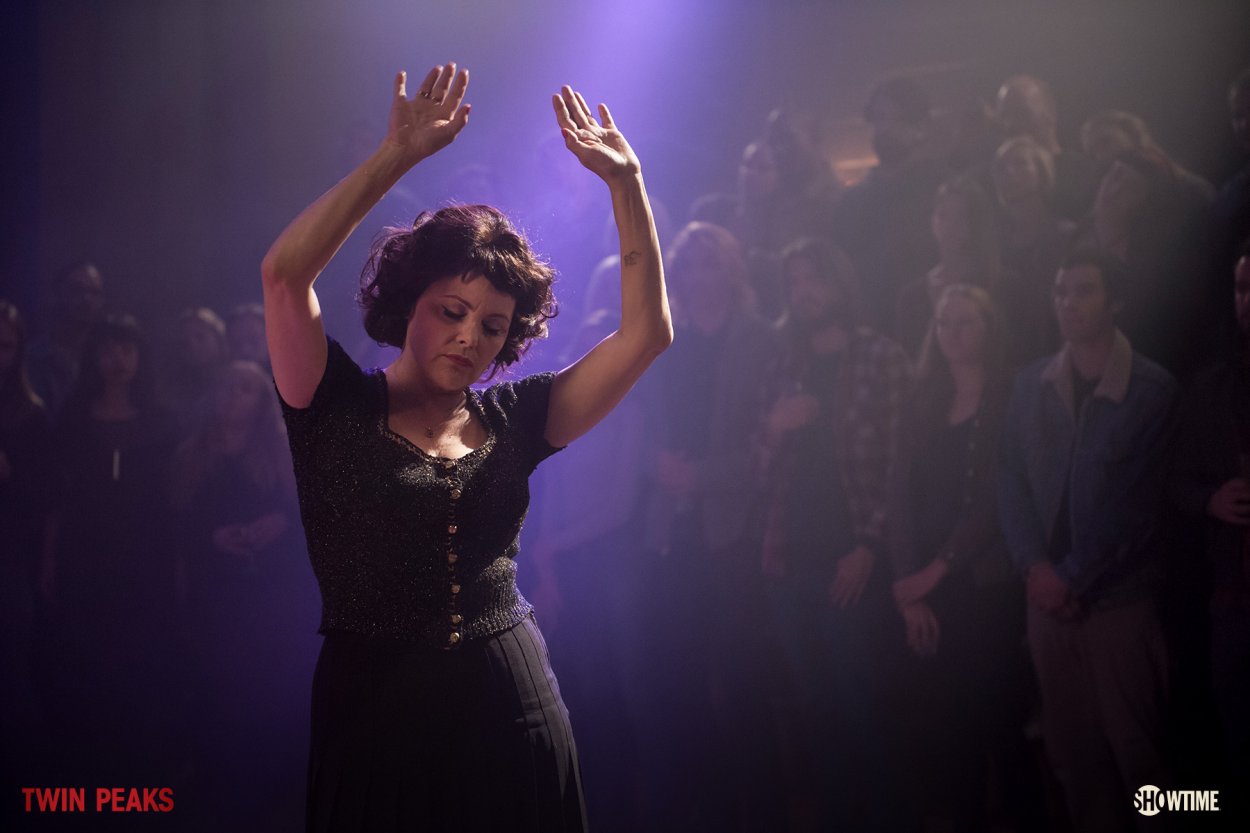 To the plot, maybe Billy is Drunk and maybe he isn’t. It doesn’t really matter, because to the theme, Billy is another thing you chase when you should really be deciding to wake up. It’s honestly a lot like the whole Judy thing.

A whole bunch of people are trying to find Judy, and they’re so focused on that quest that they fail to notice the weird state of reality they’re in. You could say the same thing—on a much smaller scale of course—about the people trying to find Billy. Trying to focus on a negative force seems easier than doing the work to figure out your coordinates and shovel yourself out of your situation. After all, finding Billy or Judy would solve the problem, right? Sure, everything except for the shoveling.

Audrey had the chance to stop looking for Billy at the Roadhouse. Charlie gave her a chance to choose toasting to themselves. That simple affirmation would have been an investment in literally Audrey’s present. But Audrey toasted to Billy instead. That’s when things turned Lodge-style.

Audrey literally turned her eyes away from her life and looked to Billy, because she didn’t do the work to grow love between her and Charlie. Instead, she invented a distraction to find love—not just a contract. Dreams and delusions can be merciful to a present situation, but they also have a masking effect. Like a dream covering the world “like a river.”

“Has Anybody Seen Billy?” 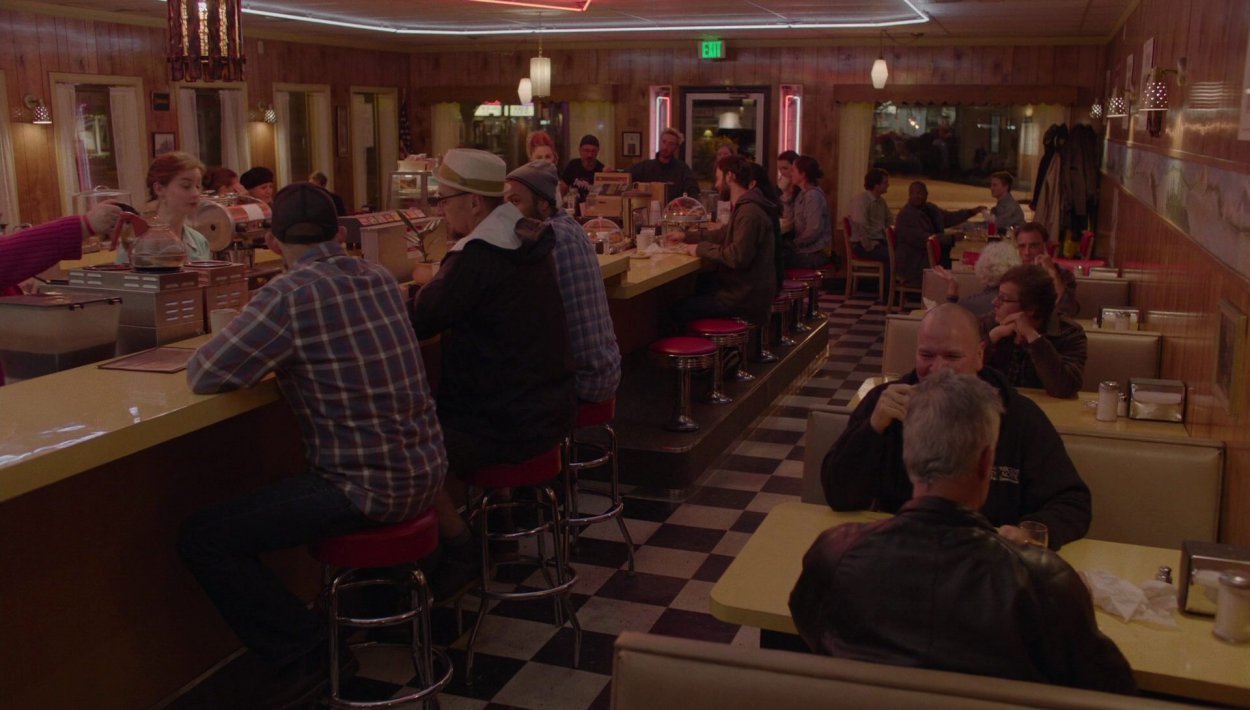 Bing’s words, by the way, are a paraphrasing of a title from the 1965 TV Western Laredo—and we know Lynch and Frost love their old Westerns. Laredo‘s sixth episode from Season 1 is titled “Anybody Here Seen Billy?” The plot itself isn’t any kind of one-for-one comparison, but it does bring up another related theme: if you’re stuck too deep in the past—such as with Lucy and cell phones—you’re not living in your present.

Looking at these thematic statements together like this, it paints a picture, doesn’t it? Sifting through all this information, I’d have to say Drunk is the identity we can comfortably pin Billy on, but it feels way less important to figure out who Billy is—and where to find him—than for characters to stop looking for him. They need to wake up, and get to work. That’s probably why we were never explicitly told if we really met Billy, or not.