They may not get much attention when they’re not made by Disney and not appearing in front of their animated tentpoles, but the artistry and creativity are alive and well in the field of animated short films. This year’s five nominees for the 92nd Academy Award are some of the starkest and unique entries I’ve seen in the years I’ve been able to cover the annual best. Below are my capsule reviews of this year’s final five for Best Animated Short. Naturally, my niche of life lessons are included. Like the documentaries and live-action shorts in other Oscar categories, the animated films are presently collected in a single program to watch on the big screen at Landmark Theatre locations nationwide, including the three venues here in Chicago.

The most modern one, per se, of the field is this computer-animated chestnut from director (and Chicago native) Matthew A. Cherry. This gem has climbed from a 2017 Kickstarter campaign to receiving its big screen chance in front of The Angry Birds Movie 2 last year and now an Oscar nomination. It playfully and poignantly shines love on the entanglement and empowerment that comes from hair-styling black hair.

A precocious young girl with voluminous hair is scrolling through YouTube and watching instructional videos of a stylist (voiced by recent Oscar nominations reader Issa Rae of the upcoming film The Photograph) specializing in taming the untamed. With the nodding consultations of her trusted pet cat, she lands on a look she wants. When she tries it herself, it’s a disaster, much to the chagrin of her outmatched father. Hair may be a woman’s speciality, but this dad becomes determined to pull off the look himself for his daughter and win the battle.

The instructor on the video always preaches “make the journey with a little bit of work and a whole lot of love.” This lesson is the send-off mantra of the featured YouTuber and it channels perfectly the adversity and attachment in the hair-styling and bonding process of Hair Love. Connect the work to patience and connect the love to shared quality time with family. The woman is wise and means more than we know to this father and daughter. Be ready for a crescendo.

Hair Love elevates from a shared father-daughter experience to even bigger family swells. It also celebrates a unique black essence that not only brings people together but lifts self-esteem. It’s skill. It’s status. It’s self-efficacy. Matthew A. Cherry nails all that with a beautiful and vibrant presentation.

So often with even the best clay work from the likes of Aardman and Laika, we feel as though we’re watching a really nice diorama being shot. Settings stay more static and fixed at wide shots to allow us audiences to soak in all the artistry. With that in mind, it impressive when something perceived as rudimentary can marvel our senses with underlying sophistication. That is the effect of Daughter which takes intentionally smeared and crude sculpted claymation and lets the camera and audio foley swoop with incredible dexterity and detail.

A rescued bird from a window becomes a visual metaphor for a complicated and strained father-daughter relationship in this short film. The father lies ill in the hospital while heart monitors break the silence between him and his daughter shuffling around the periphery of the room. Memories manifest within the girl of other times where she tried to show affection and distant dreams where she imagined a different life, mask and all.

Plenty of animated shorts employ the dialogue-free style to let the visuals do the talking. While that is indeed the case with Daughter, it’s also a bigger intentional meaning between the family members and their difficulties. The silence between them is unhealthy and cannot be sustained. There is a rightful longing to say something and speak your feelings before the chances end and the people that need to hear them are gone.  Say something.

All of these elements are masterfully created in this medium by Daria Kashcheeva, who wears the hats of writer, director, art director, DP, piano player, and more for this film. The camera depth of these scenes is remarkable. The characters are commonly shot in close-up showing the literal and figurative imperfections within a sensory soundscape that is encapsulating. Of the nominees, Daughter is the heaviest hitter for story and most challenging in design. Bravo here!

Kitbull is the requisite Pixar entry for the Academy Award. This cutie pie comes from their new SparkShorts division. Written and directed by Rosana Sullivan, Kitball boasts, and pleasantly so, traditional 2D animated brilliance, which counts as a nice stylistic change of pace from the CGI juggernaut.

In platonic “Bennifer” name-combination fashion, this short features a little stray black kitten befriending a muscular white pitbull in their shared urban landscape of San Francisco’s Mission District. The kitten makes its home inside a cardboard box behind a barbed-wire-strewn trash heap next to a garage. The big pooch is chained to a doghouse right outside the door. Both have their fears. Both have their flaws. Both have their scars when it comes to trusting outside sources, even generosity given to them.

The lesson, naturally, is to help a stranger.  It’s even bigger than that when the stranger lives in proximity to you. That’s a neighbor instead. The cat witnesses the hardships of the pitbull and vice versa for the gruff dog watching the alley cat. They have their differences and their fears, but they show kindness and care to help someone in need. It’s basic, beautiful, and effective for an animated short, which is par for the Pixar course.

This is Sullivan’s first directorial effort after years as a Pixar character designer for the likes of Piper, Incredibles 2, and The Good Dinosaur. Without dialogue, the characters speak volumes with their body language and acts from every purr and pant to twitch and trot. Animal lovers will find great joy. Likewise, there is much to be impressed by when it comes to the nearly abstract designs that lessen the tendency to hyper-detail in favor of letting the themes paint the picture. Short or not, that is true to the fabled Pixar Punch.

It’s a natural wish for a young child to want a companion at home. Desiring a brother or sister brings the equally natural result of future sibling rivalry. Ask any big brother or big sister and they’ll tell you how the ups outnumber the downs of that relationship. Throw in some cultural notes and you have the lovely Annie Award nominee Sister from Chinese animator Siqi Song.

Save for a few items of colorful adornment, Sister is shot in black and white with animated stop-motion fabric dolls. In dated chapter markers spanning the early 1990s, the narrator is the big brother observing the growth of his little sister. Spanning the first five years of this little one’s life, the brother simultaneously celebrates and laments the turbulent life of getting along with a petulant little one.

Those savvy in their international history will see those timestamps and know of the dreaded One-Child Policy that operated in China during that time. Siblings were rare, frowned upon, and often, through sad and unfortunate measures, prevented. There are millions within multiple generations in China who never got to experience the closeness, both jovial and contentious, of having a sibling and the lift they bring to growing up. That societal factor looms large over the truth and setting of Sister.

With that gravity in mind, the woulda-coulda-shoulda moments in Sister teeter gracefully between funny and touching. Existence becomes the most powerful emotion of Song’s lovely and crushing short. Dedicated to the siblings “we” never had, the animation is a strong testament of remembrance to a time of lost experiences. 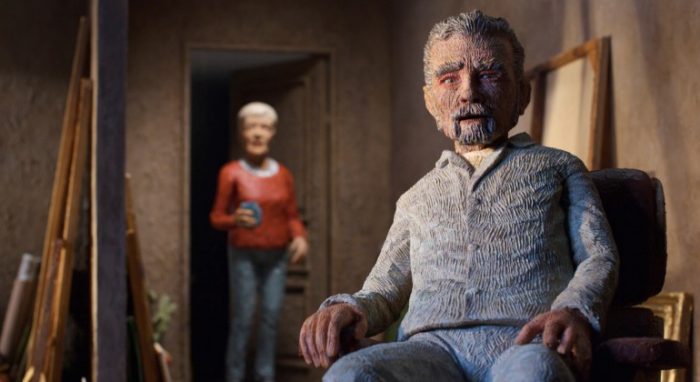 Texture is such a trait of all of these nominated animated shorts.  Most use it within their art to stand out or define purpose. Memorable incorporates its unique physical texture into its act as a thematic tool of questioning the clues and differences between dreams and memories. This may start as a head-scratcher for many, but will soon hit with poignancy.

Elaborate opening credits creep over the grooves, ruts, and cracks of what will be the painted clay that makes these French environments and characters. In surreal ways, common objects around Louis (voiced by Andre Wilms of Le Havre) and his wife Michelle (voiced by Dominique Reymond) begin to defy their shapes and normal states. Time too seems to hop in these moments. Is the forgetful man seeing things or is it the whole world that has started to bend?

If what Louis is experiencing in Memorable are the hazy flashes of a neurodegenerative disease like Alzheimer’s, then recognition is the challenge. What he knows and what he doesn’t couldn’t matter more. The spirit and humor of a person may not change, but memorized matches and connections will fail, making that personality out of touch and out of place from where it used to be.

The animation shifts are stunning in Memorable. With each passing action written and directed by Bruno Collet in his sixth short, the main character’s perception of both himself and his surroundings become subtly more dilapidated with the mounting cognitive loss. It’s a striking way of presenting the human and mental effects of such ailments. Get your tissues ready.