Here at 25YL we’re jumping, stomping, and diving into the most iconic and popular video game franchise ever, the Super Mario Bros. series. Each week, we’ll take a unique look at each game in the series, and discuss aspects you may not have considered. This week we look at the version of  Super Mario Bros. 2 that most of us grew up with, for better or worse. 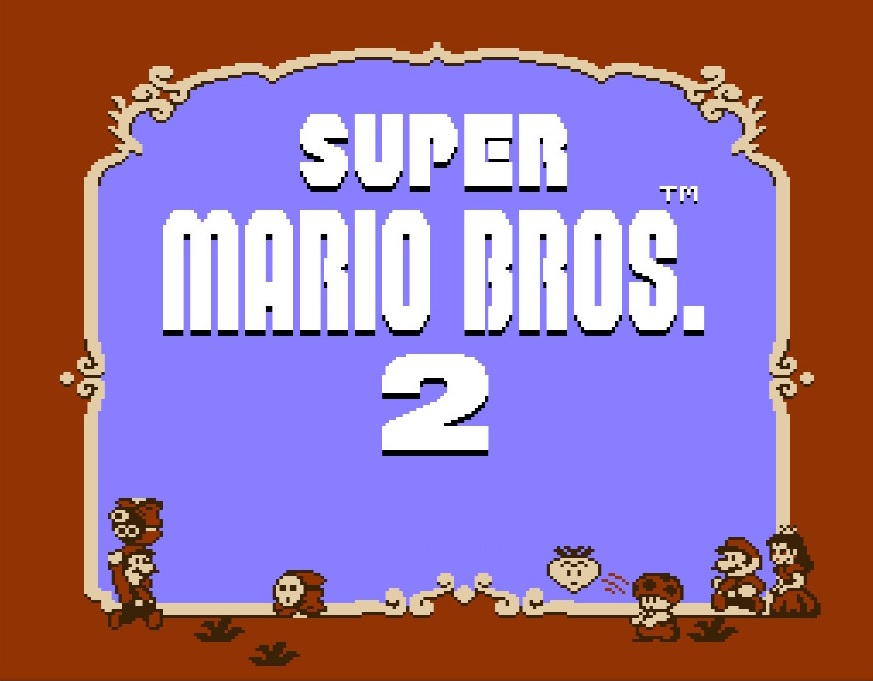 So it wasn’t a dream. I mean plot-wise, sure, totally a dream, not a spoiler, but there was a game called Super Mario Bros. 2 that came out in America, and it’s the only Mario 2 most people knew. They knew not of the nails hard Super Mario Bros. 2 Japan got. They didn’t know their game was a reskin of some tie-in game called Doki Doki Panic. This is 1988. They don’t have internet! They don’t know what’s going on!

It’s all true too. I was a young kid in 1988, obsessively reading my first edition Nintendo Power with the Super Mario Bros. 2 cover art, featuring Claymation-style figures that range from decent (Wart’s not that bad) to Mario! (there’s a reason he’s cropped out of the featured image above).

Anyway, when I was a kid I loved this game. Nowadays, I don’t remember why, because every time I’ve tried to play it since, I find it to be a joyless slog.

OK, hear me out. This isn’t a hit piece. I promise. Look, I can list off things the game does that are good ideas. Four playable characters? Genius! Luigi gets his trademark high jump and slippery feet. Princess gets her little float mechanic. I get it. I really do. I understand. Those things paved the way for trademark character moves, and led to little (but impactful) subtleties like the uniqueness of multiplayer in games like New Super Mario Bros. and Super Mario 3D World.

People like this game because you can pick your character of choice for each level. Experienced players know which levels require which character. There are benefits to using certain characters in certain levels, so using the Princess may allow you to hover-skip whole areas, while using Toad will help you when you need more speed. Frankly, I’m Princess all the way. Nothing beats jumping with a cushy margin for error. For my money at least.

The mere fact that this game is different from the others in the series makes it a favorite among many fans. I have nothing against it being different. One of my favorite games in the Super Mario series is Super Mario World 2: Yoshi’s Island, which is basically a backdoor pilot for the Yoshi spin off series. No judgment zone.

Another thing the game does well is incorporate interesting mini boss battles into the mix. Many levels end with you having to do battle with Birdo, a giant bug eyed creature with an anteater nose that is also a sort of half-trunk, in order to obtain an orb from her belly, that allows you to exit the level through a door shaped like the gaping maw of a giant bird’s head—as you do.

Speaking of which, let’s do the strange tale of Birdo real quick.

Birdo is the Typo

Birdo was described in the game manual as a he who thinks he’s a she. Since then, Nintendo has gone on record as saying Birdo is female. I’m sure certain clown comics will have a joke to make about such things, but they really need to fix their hearts or die. Character backstories get ret-conned all the time. Besides, she was mislabeled as Ostro in the game manual too, so let’s not take instruction booklets as canon, otherwise we’ll have to make peace with the fact every time Mario destroyed a brick-block in the original game, he was actually killing someone from the Mushroom Kingdom, because they were all turned into bricks by Bowser. So sayeth The Manual.

Non-troversy aside, Birdo is actually a pretty cool usage of this game’s new mechanic. Lifting the eggs in midair and then tossing them back at Birdo accurately was something that required a little practice, but eventually you had her moves down, and you felt accomplished.

Super Mario Bros. 3 uses Boom Boom to the same effect, placing him as a frequent mini boss foil, whose movement and difficulty only shift slightly throughout the game. It was a welcome change to have most levels end with a boss fight, even if it bordered on being repetitive at times. And, yeah, the boss level theme is pretty dope.

Super Mario games have Warp Zones, and Mario 2 is no different, except in the execution of said Warp Zones. In the original game, they were found hidden in secret areas that led you to pipes, but there aren’t any pipes in this game—instead, there are jars. It’s just like that old riddle: When is a pipe not a pipe? When it’s a jar.

OK, that’s not the riddle, but close enough. You can enter jars in this game. This is something you learn early on, and you can find anything from a 1 Up mushroom to a Key in there. However, when you use your magical potion in an area where there are jars, you can enter Subspace and go down certain jars that act as Warp Zones in that alternate universe. It’s a pretty clever idea if I’m being honest.

The magic potions that create the door that leads you into Subspace is an interesting design choice as well, because it leads the player to try and guess where the right place to drop the potion is. You, as the player, know that if you drop the potion where there is vegetation growing, those will be coins in Subspace if you pull them up.

On top of that, you’re looking for Mushrooms that increase your max HP by one. There is trial and error involved. Often times you need to scout the level for interesting or suspicious looking areas. Perhaps dropping a potion here might lead to something rewarding. It requires you to seek out subtle visual cues the game might be trying to show me. At least this game never punishes you for exploring, like the Japanese Super Mario Bros. 2.

The bosses in Mario 2 were cleverly designed for their time, and again use the new game mechanic well. That itself is a Nintendo trademark. Most of their triple A titles introduce a new mechanic of some sort, and then they proceed to wring every possible idea they can out of it—and then they just keep the fun ones.

Mouser, with his sunglasses, was difficult to defeat. In theory he’s simple. He throws bombs, so pick them up and throw them back at him. However, he moves on a platform that seems narrow enough, but the exploding bomb doesn’t have much damage range, so you’ve gotta plunk that bomb down in a really good spot, and time it for when Mouser might be in the same spot.

Tryclyde, the three headed snake, can be bested if you mount the proper defense. FryGuy can be defeated with patience and perseverance. None will cause you to throw your controller, but it’s a nice change of pace after the all-Bowser shenanigans of the original.

The final boss battle in the game with Wart always confused me as a kid. I had no idea why only some of my hits were connecting with him. I didn’t get that I was feeding him veggies when his mouth was open. I wasn’t good at recognizing boss tells back then.

Let me tell you something about the ending to Super Mario Bros. 2. Back when it came out, it blew our freakin’ little minds. First off, I have no idea who these people are with the wings, or why they were trapped in a jar, or why they are merrily parading the corpse of Wart through a coliseum while the four heroes are ranked based on how many levels they starred in, but for an NES game this ending was badass.

Then the scene cuts back to show Mario sleeping, dreaming of all this insanity. His sleep is broken, he wakes up for a second and goes back to sleep as the credits roll. The only thing is, they are cast credits of the characters in the game. Again, much like Super Mario Bros. 3, this game gives you the impression all of this isn’t “real.” It’s a production of some sort. I’m sure it was just a way to pivot back to the original gameplay format for the next game, but love it or not, this game was influential in the series.

A lot of staples in the Mario series came from this game. Desert and ice levels originated here. Characters such as Pokey and Shy Guys crossed over from the dream world and into the Mushroom Kingdom. Levels were both horizontal and vertical. You could backtrack if you wanted to. You weren’t given any easy way to rack up a ridiculous amount of lives (unless you were a wizard at beating the one armed bandit at the end of each level). The game does so many things well. So what’s my problem?

If I had to explain my dislike of Super Mario Bros. 2, the best I can do is that I just don’t like the game’s vibe. I remember playing Zelda II, and Castlevania II, and Super Mario Bros. 2. and whenever I replay the great games in all those series, I always skip these (or make some half-hearted attempt at a run that quickly gets abandoned). They’re inessential. I only see the bad in them. Zelda II‘s graphics (the top down view especially) have always seemed aggressively phoned in. Castlevania II, I’ve already told that story. Super Mario 2? Where’s the stomping? The question mark blocks? This isn’t Mario. This is off brand. This is season four of Community. I’m just not vibin’ with it.

I admit it though, Super Mario Bros. 2 is a good game. It did a lot of new and interesting things. It’s brighter and more colorful than the original. Its difficultly is based on learning a brand new gameplay device that is incorporated well. It maintains the series tradition of hidden secrets and warp zones.