Meet Richie English: a graduate of the University at Buffalo’s School of Music and a fan of David Lynch and Twin Peaks. He’s a music educator, arranger, and pianist currently putting the finishing touches on a symphony tribute to David Lynch. With deep ties to the world of Twin Peaks and all proceeds going to the David Lynch Foundation (DLF), this is definitely something to be excited about! I had the pleasure of recently discussing Richie’s ideas with him.

So how did the whole idea for this come about?

“It all started after I saw Episode 8. The night that aired…once the origin story happened and we got taken into the Trinity blast…That was a transformative experience, and it was at that point I said to myself, okay this guy has enriched and outright saved my life on more than one occasion. When going through depressions and drug use that I needed to kick, his work was always there. But this…was on a different level. It was humbling. So it was at that point I thought, I have to give something back to this guy…I’ve got to give something back to David…but I didn’t know what I was going to do. I just kind of knew that enough was enough and wanted to give something back. I asked myself shortly after that episode…do I really mean to do this? Do I really mean to put my money where my mouth is? I immediately answered myself that yes, I do mean to do this, and I knew it had to be something worthy for David.

“So it was the night that episode aired that everything started brewing in my mind’s eye. And it just gestated for a long while, about a year and a half, and then I figured out a plan. I talked to some people and realized that David’s heart is in the DLF (David Lynch Foundation). Originally, I was going to take my favorite imagery from his work or favorite moments…and I was going to kind of interpret them and set them. But it was impossible to pick. I realized David keeps his artistic work separate from the DLF’s work. And so I started thinking to myself…how is it that David came up with a scene like, for example, when you see all the Woodsmen moving erratically in front of the convenience store? Just out of nowhere it cuts and sounds like he’s zoomed in on ants in the grass…that scuffling noise…and I thought, where does that come from?

“And so I got into Transcendental Meditation (TM) through there, and I started getting really interested in what it must be like for an image like that to pop up for him. So then I started getting things like that popping up for me in my own ways as I got deeper into TM. I realized that I should probably try and depict my own linear journey in any given meditation session, about 18 minutes’ worth, where you sort of detach and untether from the world around you and go within yourself, then emerge out of it. I then thought that might yield some results and be a great thing. So I started picking away at it. As I was doing that I started thinking about a way to generate attention and ultimately funds to benefit the DLF.”

As Richie’s ideas continued to form, he contacted Sabrina Sutherland to make her aware of his intentions. His hope was to also ultimately get David Lynch’s thoughts. After explaining his vision to Sabrina, he received a reply from David himself through Sabrina. Richie thinks this was the first time in his life he had ever fainted…reading the note he could immediately hear David’s voice in the reply: for example, “It’s so wonderful that you want to do this!” David had provided his blessing and support for the project.

After learning this was, in fact, really happening, Richie notes:

“Once David green-lit it, a whole new kind of fear set in; I think it’s a healthy fear, but almost an impostor syndrome…can I pull this off? I continued to work, but for half a year I couldn’t figure out how to end the piece. I don’t know how much bigger of a blessing I could possibly get than David Lynch himself being behind something that I’m doing for him. Then every measure I started to think if it was the best that I could do.”

Richie was struggling to find a way to conclude the piece and then met who would be his girlfriend, Michelle, in June 2019. In speaking to Richie, it’s clear how much David Lynch and his work mean to him. I heard something even more pronounced, though: an immense gratitude but also sheer happiness when Richie spoke of Michelle. She has meant an enormous amount to him, not only to this piece of music but also to his life. Michelle writes poetry, and Richie spoke of one simple but significant line that meant everything for him finding a way to finish the piece: “I lived seven miles from the lady with the torch.”

“My mind seized on that one line and I knew how to end things. The finale to my piece wouldn’t have happened without Michelle, after being plagued for the longest time with uncertainty as the direction to take. She’s an amazing blessing in my life, and I found great joy being able to close out the piece on what the love of my life generated.”

At this point in our discussion, I was only becoming more intrigued as to what this symphony was all about! Richie revealed the title as “The Other Side of Silence,” taking its name from a book on meditation written by Morton T. Kelsey. Going into the discussion I had heard it was a Twin Peaks Season 3 inspired symphony but had no real clue what that meant.

I asked Richie if there was anything further he could share. Was this intended to be a musical score covering the plot of Season 3? Or very different but linked in some way? Richie replied:

“That’s a great question…this is an observation of two things, the first being how meditation works for me and my personal journey. The second part being a fascination and a sense of wonder for just how it must have been when during meditation David received images and plot lines that then began to form narratives. It’s now maybe around 15 very tightly packed minutes, and I’m currently working to pare everything down. The difficulty right now lies in bringing everything together; I carry a voice recorder with me and often record 50–60 10-second snippets of thoughts on any given day. Many of these ultimately provided inspiration or factored into the piece itself, and I have thousands of these snippets.”

Richie hinted at a few items that piqued my interest—specifically, that Kyle MacLachlan’s journey during Season 3 became a piece of focus. In crafting the symphony, Richard drew pages of geometric shapes, symbols, and figures. The picture below shows just how integral a role Twin Peaks Season 3 appears to be playing in this forthcoming symphony…I encourage you to study the image for clues and familiar themes. 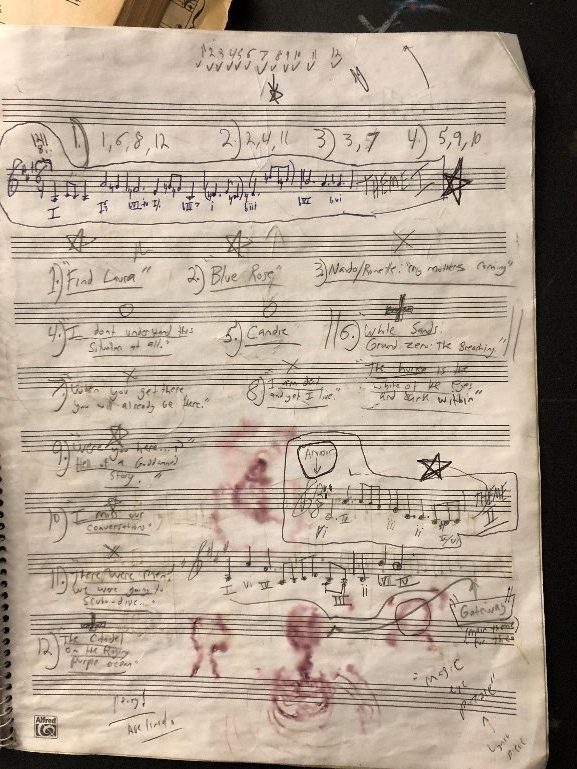 Part 3: The Dream Becomes a Reality

Richie plans to record this symphony at the Goo Goo Dolls studio where he has worked extensively over the past decade. He has in fact been called “the Axl Rose of Buffalo classical music” by Robby Takac, bassist of the Goo Goo Dolls, which sounds like a story in and of itself!

Following completing the recording, Richie then plans to conduct live performances. Thoughts are that these will likely be paired with a forthcoming David Lynch event like Festival of Disruption. Afterwards the recordings will be downloadable worldwide for the cost of a small donation to the DLF. With all proceeds going to the DLF, it’s clear this symphony is being developed as a labor of love.

Speaking on what David means to him, Richie notes:

“It’s not enough to say he’s my hero, not even enough to say he’s a mentor…but really a guide. More than anything, the bulk of what started this piece for me, and the bulk of why I love David so much…I can literally look at some random corner in a room or on a desk, and now I can see that there’s not just a world, but universes there…PLURAL, always material there, always that mystery. Without his work, without his example, I would be blind to it. I think a lot of us would be. Everything seems so exciting, everything seems so beautiful. I don’t get that artistic lesson from most of the artists that I love. He’s unique in that regard; that’s why he’s my hero. When we say he enriches our life, it’s an active thing and I can point to the reasons why and the effects he exerts. That’s something that impelled me to start this work and I’m now finishing it for him.”

To hear this love and inspiration for David’s work summed up so well, how it inspires many to take a closer look, I was momentarily at a loss for words. I believe David will be proud of what Richie has created here. Perhaps he might simply use one of his favorite words: “Beautiful.”

Learning More About “The Other Side of Silence”

To learn more about the symphony and about Richie English, you can follow him on Twitter at @RichieEnglish or on Facebook. Watch for more news on where you can hear the symphony and support Richie and the DLF. I believe fans have something truly special to look forward to in 2020!