It is the dreaded year 2033. I’m not quite sure science backs this up exactly but let’s just roll with it: a meteorite hit Earth in 2022 and destroyed virtually all the water on the planet, reverting ocean life to dry sandbeds and most of Australia’s cityscapes into an endless desert. By the time 2033 has rolled around, one mega-corporation, simply called Water and Power, has managed to recover most of the area’s limited water supply and hoard it, shifting the balance of power into the haves and have-nots. Fighting against this corporate greed is a legion of kangaroo/human hybrids, a slew of desert-rat freedom fighters, and, of course, Tank Girl (Lori Petty).

Tank Girl certainly is a cinematic marvel when taken into context with Hollywood’s evolution since the film’s release in 1995. In a current era of #OscarsSoMale, in which female directors are often left in the cold for not only awards recognition but for actual jobs, MGM had the wherewithal to hire a female director with two genre features under her belt to direct a $25 million action/adventure female-centric comic book film. Twenty-two years later, Patty Jenkins directed Wonder Woman and people everywhere finally thought the glass ceiling was broken. But the dents started long before with Tank Girl.

Tank Girl director Rachel Talalay delivered exactly what the studio expected of her: a brilliantly original, character-driven, unique comic book film that channeled not only the indie comic it was based on but grasped onto the alternative rock aesthetic and girl power movement that was taking America by storm. Befitting of the tried and true tale of women not getting a fair shot, Talalay’s film, unfortunately, bombed at the box office and she was never given a feature film to direct again. Thankfully, Talalay is a prolific television director now, with almost 60 episodes of primetime and niche credits to her name.

It is still shocking to consider that only one box office misfire in 1995 could torpedo female-centric productions for decades. And while Mad Max: Fury Road (2015) and Wonder Woman (2017) certainly jump-started another feminist movement in mass pop culture film, Tank Girl’s victorious post-feminist heroine deserves so much credit that she will unlikely get. Before Imperator Furiosa was smashing the patriarchy by taking back sexual power, Tank Girl was savaging the male industrial complex a one-liner at a time twenty years earlier.

Postfeminism is defined both in a chronological (and more literal) sense (“relating to or occurring in the period after the feminist movement of the 1970s,” per dictionary.com) and in a theoretical sense. Melissa Hamer of the University of Victoria helped define the term as “the purposes and goals of feminism are no longer needed.” In essence, the character of Tank Girl, while living inside a world that is still male-centric and primarily sex-obsessed (even some of our heroes, like the villains, want to literally hump the character of Jet Girl [Naomi Watts] with limited or no consent), becomes the perfect post-feminist icon: a goal to be reached and attained, a constructive fantasy.

Tank Girl is an anarchist with fierce individuality defined by her rebellion against authority and her embracement of sexual freedom. At odds with Water and Power’s Kesslee (Malcolm McDowell), Tank Girl chooses to put up with torture and imprisonment in lieu of giving up her power. In the end, she prevails not only over evil but over accepted norms. She takes a member of the kangaroo/human hybrids called Rippers as a lover, Jet Girl as a best friend, the young Sam as a surrogate daughter whom she and Jet Girl serve as mothers, and defeats the male-centric corporation from the inside/out, all while turning a male-dominated brothel into a Cole Porter wonderland.

It is Lori Petty’s bravura that allows the absurdity on screen to translate successfully. Not only is it rare to have a female director in charge of a big production but it is also rare for a non-A-lister to helm and truly command a studio project from minute one until the credits roll. Tank Girl is certainly an anomaly that should have started a revolution but instead went quietly into the night. Hopefully, the cult classic status will give it a continued audience over time and we can see the benefit of female-driven genre fare.

It is the dredded (heh, get it) year 2134. The “Cursed Earth” is a mostly ravaged wasteland due to an unspecified disaster, likely one of man’s making. But on the outskirts of these unlivable lands, where only mutants are said to roam, are the Mega-Cities. One such city, Mega-City One, is a sardine-packed hive of violence and criminality. With over 800 million people stuck in high rise after high rise, only The Judges can maintain power and any semblance of peace. They act as Judge. They act as Jury. But most importantly, they act as Executioner. They are the law. God help those who break it.

Dredd, like Tank Girl, was a box office flop but one with both strong cult status and impressive social commentary that deserves a revisit (it should be noted that I placed Dredd as #18 on the Top 20 Films of the Decade list released at the end of last year). With a surgically precise script by Ex Machina/Annihilation writer-director Alex Garland, vivid direction by Pete Travis, and a heart-thumping score by Paul Leonard-Morgan, Dredd is a gruesome, in-your-face action masterclass that makes one question the honor system among thieves; which authoritarian figure do you accept and which do you rebel against? 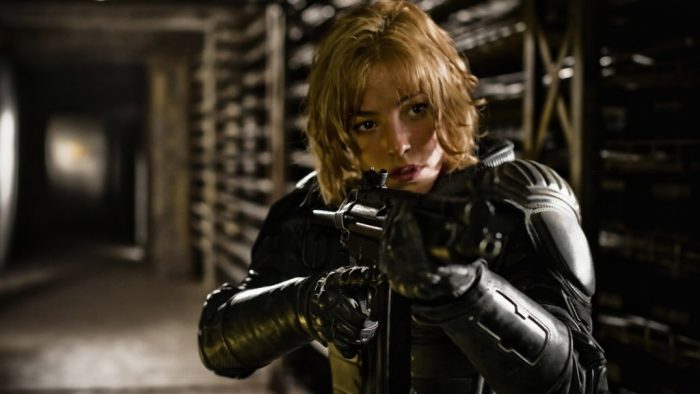 An authoritarian is defined as someone “favoring or enforcing strict obedience to authority, especially that of the government, at the expense of personal freedom.” The world of Dredd is one of endless authoritarianism. The Judges are our by-default heroes in the narrative of Dredd but in a just, real world are anything but paladins. Exhibiting the lack of due process and oversight afforded citizens of a democracy and inflicting ruthless judgment typical of a demagogue’s local hit squad, Judges treat the law like a religious figure with impregnable regulations: disobey and pay.

But the criminals and most of the citizens aren’t exactly much better. Ruled by tribalism and a vicious criminal code that punishes disloyalty, the criminals function much like Judges themselves: exposing internal injustices and weighing judgment on those that oppose the code of the clan. With most of the citizens of the towers being ex-criminals or drug lords, the fostering of a corrupt hegemony is almost expected as a reaction to the existence of the Judges themselves.

Thus the Judges and criminals of the Dredd universe are an interesting dichotomy to dissect. The plot allusions to the War on Drugs and police brutality, which go back to the comics that the character and universe originate from, indicate that a circular wheel of self-punishment is at play in the Mega-Cities: harsher penalties put more people in jail. Harsher terms create more crimes. More criminals foster more criminality to the point where it becomes almost hereditary in family bloodlines. It is the snake eating itself, essentially.

But that is part of Dredd’s metaphorical power: it creates lines in the sand. In the end, we’ll go with a lawful evil over a chaotic evil. And our loyalty to the lawful evil becomes so true that we can see how this vicious cycle begins in the first place. If we have someone obeying a more rigid law, no matter how brutal, we tend to want the law-abiding to live and the lawbreakers to die.

Then again, this could all be a bunch of fooey. Dredd is an amazing action film with some of the most fantastic action set pieces in the last decade. It is unflinchingly beautiful in its violence which both drives up the cool factor and the allusions to things we put up within society. Its social commentary sneaks up on you. But make no mistake regarding those allusions: they are the law.