Welcome to What’s the Buzz, 25YL’s feature where members of our staff provide you with recommendations on a weekly basis. In our internet age, there is so much out there to think about watching, reading, listening to, etc., that it can be hard to separate the wheat from the chaff, filter out the noise, or find those diamonds in the rough. But have no fear! We’re here to help you do that thing I just described with three different metaphors. Each week a rotating cast of writers will offer their recommendations based on things they have discovered. They won’t always be new to the world, but they’ll be new to us, or we hope new to you. This week, Jan Kalina is watching Brooklyn Nine-Nine and Mythic Quest: Raven’s Banquet, Caemeron Crain is checking out “Wait, what?” from Mike Crain’s forthcoming EP, and Hawk Ripjaw got teared up over the finale of The Good Place.

Jan: Brooklyn Nine-Nine returned this week for its seventh season with two episodes in one evening. And they were a doozy. The series has no problem staying funny and relevant. And the network change actually did the show a favor. Honestly at the moment the show was cancelled I felt content. The characters reached their goals and pretty much finished their narrative arcs.

The show is still hilarious—Vanessa Bayer as guest star in the Manhunter episode made me wish she would become a regular on the show. What keeps things fresh is the constant change in characters’ dynamics. However I can’t help the feeling that the characters are not in for any surprises in their personal lives. The cast is amazing and I hope that when the show reaches its conclusion, they all meet in another project. I just hope I never feel like this show overstayed its welcome. But that would be difficult to accomplish with Peralta, Santiago and Boyle and the rest of the 99 on the case.

Caemeron: You might be familiar with Mike Crain from his work with Retox, Dead Cross, or possibly Cunts (who opened for Mr. Bungle in LA last night). It’s probably fair to say that Dead Cross is the largest of those projects, what with Mike Patton and Dave Lombardo being involved, but I would recommend checking out all three.

I was fortunate enough to see Dead Cross live in Brooklyn a couple of years back and it was a great show. Their music is almost as powerful on recording, but you might struggle to get that wall of sound effect the live show produces. The band absolutely thrashes, and this owes a lot to Crain’s guitar work, as well as the contributions of bassist Justin Pearson (also of Retox).

Now Mike Crain is set to release a solo EP via Radical Guy Recordings on March 13. Apparently it is to be self-titled, which strikes me as a bit gutsy (even as I hope that our Crain name inherently draws people to check out our work), or perhaps we should take this instead along the lines of how down to Earth the music is. At least “Wait, what?,” which you can check out below, is of a much different style than the bands I mentioned above. Brooklyn Vegan compared the sound to Nick Cave, Swans, or Mark Lanegan, and that strikes me as on the right track.

The music is slower, more melodic, and feels simpler than in Crain’s other projects, but if you pay attention it may well be more complex. There is a lot going on to feed into a sense of simplicity. And the difference in style from his other bands makes the existence of this solo project feel justified. I look forward to hearing what else he has in store for us.

The video, directed by Bryan Hamilton, features cousin Mike shirtless in a hallway, sitting in a bathroom, and some swirling camera effects to add a certain sense of disorientation. As with the song, the biggest thing I want to say is that it feels grounded. But rather than describing it further, you should just give it a watch and listen.

Hawk: The Good Place finally wrapped its final episode a week ago, and it couldn’t have concluded the story of its six lovable core characters more perfectly.

I fell in love with The Good Place very quickly—Michael Schur, who is now three for three with this, Parks and Recreation, and Brooklyn Nine-Nine (and producing and writing credits for The Office and more), has a distinct fingerprint as a television producer. His characters are odd but endearing—flawed with an intent to do better to others. They exist in a world often semi-realistic but governed by a wacky sense of humor. The Good Place is probably the starkest example of that mindset, and that’s why it’s so good.

When the show begins, main character Eleanor (Kirsten Bell) has entered The Good Place, the non-demoninational version of heaven, and realizes that she’s there by mistake given the fact that she was a massive, selfish piece of work on Earth. Her guide is Good Place Architect Michael (Ted Danson, wonderfully quirky) and cosmic knowledge repository Janet (D’Arcy Carden, equally wacky but subdued). She has to pretend to be kind and do good deeds in order to fit in at the Good Place and not get ejected.

She runs into Chidi (William Jackson Harper), Tahani (Jameela Jamil), and Jason (Manny Jacinto), who help her come to a realization: through trying to pretend to do good to others for selfish reasons, she’s starting to genuinely enjoy performing acts of kindness and genuinely starts to care for others. It’s a profound evolution of character development to show people do good not only because it’s right, but to support each other.

As the seasons progress, the theme of this core group supporting each other becomes more prevalent, and they all develop a profound, selfless love for one another. What started as a survival instinct to remain in paradise has transformed into a genuine friendship. From there, the close-knit friendship branches off into a care for humanity as a whole as they strive to impart a sense of selflessness into others. Yet, the emotional core of these characters remains, and their companionship is what really defines the show.

In a show that has spent four years of its characters exploring the afterlife and seeking paradise, the final episode explores the finality of ceasing to exist—it goes there, but explores death as something on one’s own terms, finding peace with leaving loved ones behind, and living a fulfilling life before being content with death. Real life isn’t like that, but there are several analogies offered in the finale that, personally, made recent grief easier to swallow, despite the painful finality of the exchanges in the episode.

The show actually resolves all remaining plot conflicts in the penultimate episode, and the finale is a warm, meditative and deeply emotional send-off that dispenses with tension and stakes and lets each character arrive at the natural conclusion to their arc and exit the show with a sense of peace they’d been moving towards since the pilot. There aren’t many shows that so profoundly put a cap on things, and The Good Place is one that I would have been heartbroken to see cut short.

I have no shame in admitting that I welled up several times in the finale, and finally lost it during one key monologue in the back half of the episode. The dialogue, direction and music fit together perfectly, and it comes as no surprise to learn that not only did none of the cast members allegedly make it through a table read of the script without crying, but the tears shed by the cast onscreen were absolutely genuine. The Good Place was a singularly wonderful and nearly perfect show: by turns bizarrely hilarious (a favored Bad Place torture method is “butthole spiders”), engaging, and ultimately uplifting, I’m so happy that it was able to end on its own terms, and I’d like to think that we’re all a bit better for having watched it. 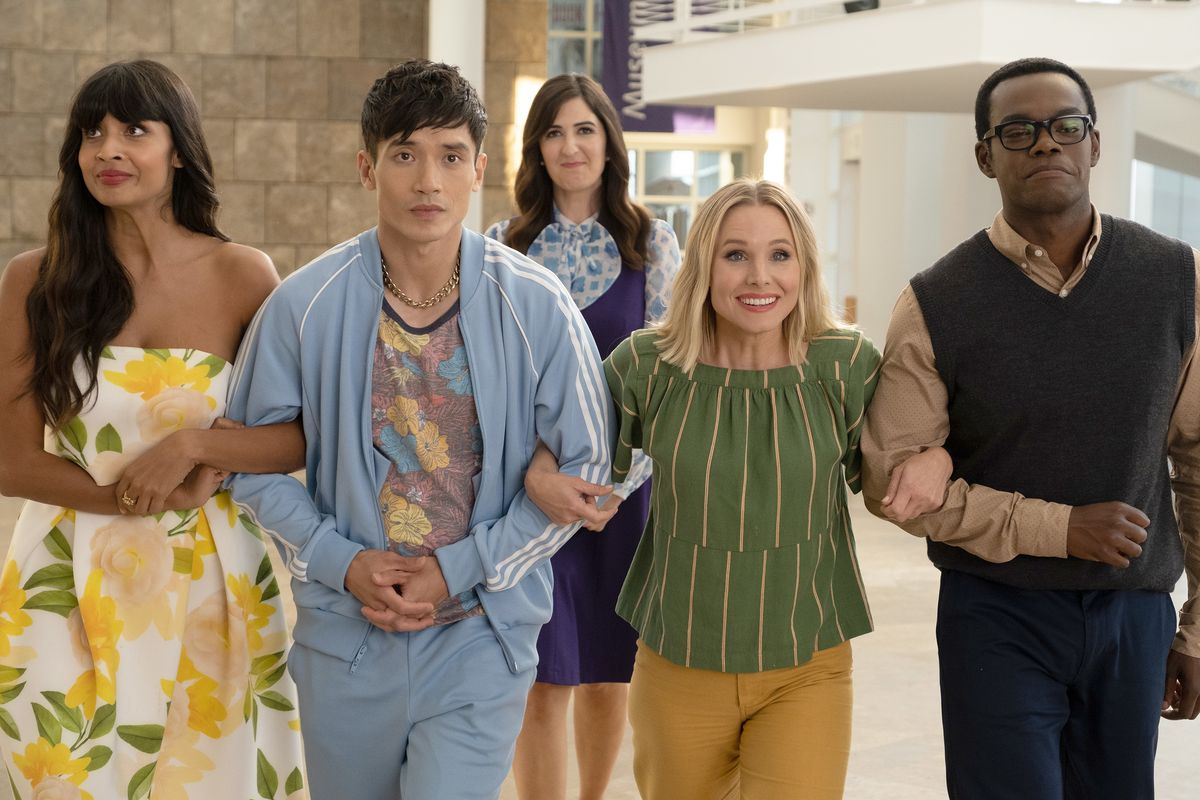 Jan: Mythic Quest: Raven’s Banquet is another example that Apple TV + has earned its valuable place in the entertainment landscape (Dickinson is one hell of a show). The 30-minute show is off to an amazing start and it feels a little It’s Always Sunny with its lead and mainly how it tackles major topics going on in the gaming industry and the whole world as well—toxic masculinity, (that seems to be McElhenney’s and Gordon Green’s go-to topic to challenge), sexism, the male gaze in the gaming industry and how it is dominant in marketing, the power of a (toxic) fanbase, the multiple ways of how one can use a shovel, and how stories are created. Sometimes it seems, and is presented as though one man is responsible for some creation, when in reality there is a whole team of some very capable men and women—some jerks, some star-struck, some trying to appear macho, and some good people as well. Mythic Quest is definitely worth a watch. And for the Community fans: it’s great to see Danny Pudi again.