At the screening for Downhill, there was, per usual, a mixture of press and moviegoers with advanced passes. With the exception of massive releases like Joker or Bad Boys For Life, advanced screenings for smaller films usually don’t amass a large crowd. But the line waiting to get into Downhill was immense and I chalk that up to Will Ferrell’s presence. No matter how you feel about Ferrell as a movie star/comedian, the prolific actor draws a crowd; his films have grossed over $2.5 billion, at roughly $90 million per picture. Since he makes a lot of low budget comedies, this is reliable and profitable for the studios.

But the average Ferrell film isn’t exactly known for its high art, lying somewhere in the obnoxious Adam Sandler zone. But with Downhill, Ferrell, as well as co-star Julia Louis-Dreyfus, are looking to provide something a bit different; a darker and more complex tale of marriage. Thus, I predicted to a colleague that the massive crowd was going to walk away unhappy. And, for the most part, they did. The consensus seemed to be “I was ready to leave after 15 minutes but stuck it out”. And the packed theater did not have a lot of hearty guffaws and loud cackles. But that, to me, has more to do with expectations not being met than the film’s actual quality. 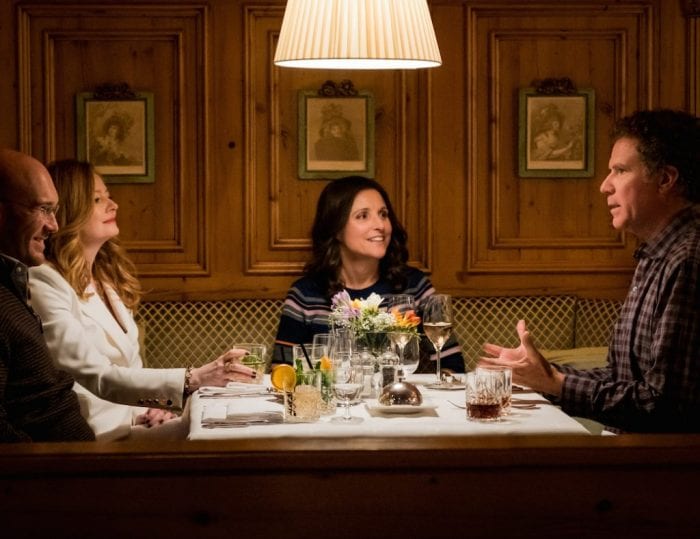 The trailers certainly try to paint Downhill as a goofy comedy but, in reality, it aims for a more cerebral touch. Does it succeed completely? No. But the effort to make something truly adult, for adult audiences on an adult night out, is compelling. And when I say adult, I don’t mean sexual or profane but mature. The stakes in Downhill are relatively low on a grand scale but high on a personal scale for the characters and what could be screwball shenanigans is replaced with subtle moments of dry, dark humor.

Based on the Swedish film Force Majeure from 2014, Downhill tells us the tale of Pete (Ferrell), Billie (Louis-Dreyfus), and their two sons as they take an expensive family vacation in the Alps. Pete recently lost his father and is a general malaise, looking at a young co-worker named Zach’s (Zach Woods) Instagram with longing for more adventure. His marriage is solid but boring and Pete just chugs along, letting the daily routine of infighting siblings and marital inanities float by.

Ferrell and Dreyfus make a good comedic team and, most shockingly, a good dramatic one too. I wasn’t as concerned for Dreyfus to pull off the material at hand but even still, her ability to capture subtle heartbreak was impressive. The same goes for Ferrell, who finally takes enough time to not consume the scenery and let the material breathe.

The more wacky components belong to the film’s excellent co-stars, including Miranda Otto as an openly sexual hotel manager and Woods as the slightly-gullible would-be world traveler that so impresses Pete. As fans of Silicon Valley know, Woods is a master improviser and while he isn’t tasked with doing too much of that in Downhill, the typical Woodsian zingers can be seen and felt from time to time.

I can’t vouch for the original film but the remake was adapted by Oscar-nominated screenwriter Jesse Armstrong (In the Loop) and co-directors Nat Faxon and Jim Rash (who won an Oscar for co-writing The Descendants with Alexander Payne) with confidence. There is never a sense of urgency or desperation with the comedy as the writers allow the audience to come to their own conclusions within the time allotted.

And at only 86 minutes, Downhill is hardly a time sucker, even if you are disappointed like so many of the crowd I was with was. Its leisurely pace may upset viewers looking for slapstick but for those looking to see a more mature, adult comedy, Downhill can’t get much better. If you happen to miss it this weekend amongst all the other films coming out, never rule out watching this on a relaxing Sunday afternoon in front of a fire. Either way, as long as your expectations are right, you won’t be disappointed.