Have you ever watched someone play a video game? Ok, let me restart. Has anyone not born in the YouTube era watched someone play a video game? It is pretty darn boring. Video Games are, even when played in groups, a first-person experience. This has been one of the biggest issues video game properties have had when transitioning to the silver screen: feeling enjoyable when the controller is in someone else’s hands.

Video game films are not a revered bunch. I can count on one hand video game film adaptations I thoroughly enjoyed from start to finish. And of the two on that hand, I can only revisit one today with any glee or excitement (everyone scream with me, “MORTAL KOMBAT!!!!!”). I can’t speak for video games today as the last system I owned was an Xbox 360, which puts me somewhere between the Jurassic and Cretaceous period, but my impression of them is that they are essentially interactive movies. Making a film version of them now would be derivative.

But back in my day (I say as I sit down with a grunt and put my cane down), video games were fairly simple affairs: you’re a plumber jumping on turtles and rescuing a princess. The narrative was as dimensional as the screen the game projected itself on: flat, point-to-point, and simple. Sonic The Hedgehog was an advancement on the Mario conceit, adding in additional options and exceptional speed that made you feel like you were doing something both completely reckless and super cool. But regardless of the game’s advanced mechanics, the story was still thin: a blue alien hedgehog runs fast and jumps on robot animals. Simple. No mythology. No complexity. Just a fun experience. 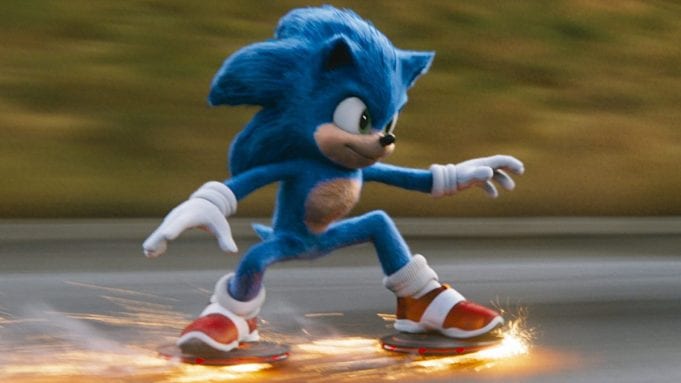 To watch a Sonic The Hedgehog movie is to suspend levels of disbelief not just of storytelling but of reality itself. It is virtually impossible to separate the character and any built-in mythology forced upon an audience from its video game origins. My experience with the character is virtually relegated to the Sega Genesis but as SEGA’s flagship character, I am aware there have been trillions of additional games that many generations have consumed. I can only imagine a pre-video game audience going into this movie cold but capturing the 50+-year-old market seems like a stretch for this material, video-game origins or not.

And that failure to separate from the source materials—that hands-on experience—may be the film version of Sonic The Hedgehog’s ultimate undoing. Though, of course, a really crappy script doesn’t help either. Much like the Sonic game on Sega Genesis, Sonic The Hedgehog is a bright, kinetic experience with superb use of color by cinematographer Stephen F. Windon, who was responsible for many of the Fast & The Furious films and Star Trek: Beyond. What it lacks, as expected, is any narrative complexity.

Sonic, a blue, alien hedgehog gifted with incredible speed (voiced by Ben Schwartz), comes to Earth using the power of his transporting rings in order to avoid the dangers of his home planet, which have taken the life of his owl protector Longclaw. For the next 10 years, Sonic hides out in placid Green Hills, Montana, secretly shadowing the town’s local policeman/good-guy Tom Wachowski (James Marsden) and his wife Maddie (Tika Sumpter).

Lonely and in need of a friend, a restless Sonic blows off steam with a friendly one-man game of baseball and accidentally creates a massive energy field that wipes out all the power in Green Hills. Aware that it is not a simple EMP or electrical accident, the government sends in its top scientist, the brilliant but insane Dr. Robotnik (Jim Carrey), to investigate.

Once Robotnik discovers the electrical field came from a creature not of this Earth, his lust for knowledge and power drives him to capture Sonic for dissection and study. But Tom, a soon-to-be San Francisco PD officer, wants to protect and serve and vows to save Sonic from the raging madman. Taking a perilous journey from Montana to California by car, Sonic and Tom will learn to become friends, if only they can survive. 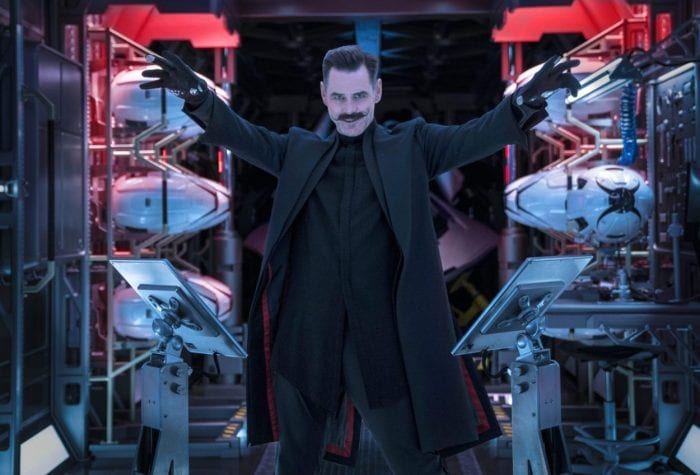 It has been a long time since we saw Jim Carrey go completely bonkers on a movie screen, humping the scenery with abandon and smiling wide enough to crack the interior of his eardrums. And his manic energy is, if not fresh or original, certainly fitting in this loud, abrasive motion picture. If you are going to amp the absurdity to 11, you might as well get the master to help it along. And Dr. Robotnik is truly the most defined character in the film. He has a backstory, motivation, and a consistent emotional arc. Too bad the movie isn’t about him.

Our two heroes are shockingly bland and wooden. The usually likable James Marsden plays Tom as a stripped-down nice guy, void of any personality traits worth rooting for except maybe his taste in action movies. He is supposed to be the straight man to play off of the lovable, goofy Sonic but considering the Sonic character is shockingly unfunny and annoying, coming across as a G-rated Deadpool who farts, Marsden has nothing to work off of. He literally has more chemistry with a donut. Don’t ask.

And while I have praised the use of color and energetic camerawork, one can’t help but be assaulted by the unending cacophony of sound that wreaks havoc on you throughout. The headache-inducing bombast couples well with Junkie XL’s unmemorable score for a witches brew of tone-deaf oblivion. I saw this in a Dolby Cinema too so I couldn’t hear, or think, for at least six hours after my viewing. My two kids, ten and five, were the lucky ones: they fell asleep halfway through.

If the ability to play Sonic was added to this motion picture experience, perhaps it could be saved. But alas, it is still just another video game movie in which we are forced to watch someone else play. And hey, that might not be bad if there was something to salvage from the experience. But sadly, a gyrating Carrey, two action scenes lifted shot for shot from X-Men: Days of Future Past, and an unending soundscape are simply not enough to make Sonic The Hedgehog worthy viewing.