In between and during the World Wars, life was a grim and drab place beneath the mask of Jazz music and egg creams. Uptight and rigid sensibilities erupted into a host of newfound flames and false hopes. Widespread fear of annihilation and hostile takeover loomed. Distrust and black world views reigned, bleeding into the noir films and books of the 1940s. Violence encroached the horizon from all sides with the threat of Totalitarianism regimes, genocide, and a much less horrific “threat”: women entering the workforce [gasp!]. From all of this comes the science fiction subgenre, Dieselpunk.

The term Dieselpunk is relatively new. And by that, it hasn’t been around for more than thirty years, even less according to certain seasoned experts. The genre itself is a nostalgic footprint of the 1920s to the 1940s when the world was at its height of disparity. Or so it thought. The world was keeling over from two world wars and with it sprung new inventions for all vicious minds to toy with.

Dieselpunk is a great subgenre filled with many different things and it doesn’t extend to just movies and various forms of entertainment, it sprouts its wings into video games, movies, books, episodic serials on tv and streaming services, and even clothing choices. Let’s get on board our diesel-powered Zeppelin, strap in and take to the skies into one of the most interesting retropunk niches out there.

One of the most popular examples of Dieselpunk is actually a recent movie from the much loved Marvel Cinematic Universe, Captain America: The First Avenger. Before you get all hyper, take this with a grain of salt. Although Captain America is based in World War II, the technology mimics reality a lot more than most Dieselpunk fiction. In fact, other than a few anomalies, the technology is the same. It gets the aesthetics and historical accuracy down, but as far as the spicy tech goes it just barely cuts it as Dieselpunk. Some other films and television shows that have a louder Dieselpunk style are: The Man in the High Castle adapted from the eponymous novel, The 1991 Rocketeer Disney film, Sky Captain and the World of Tomorrow. 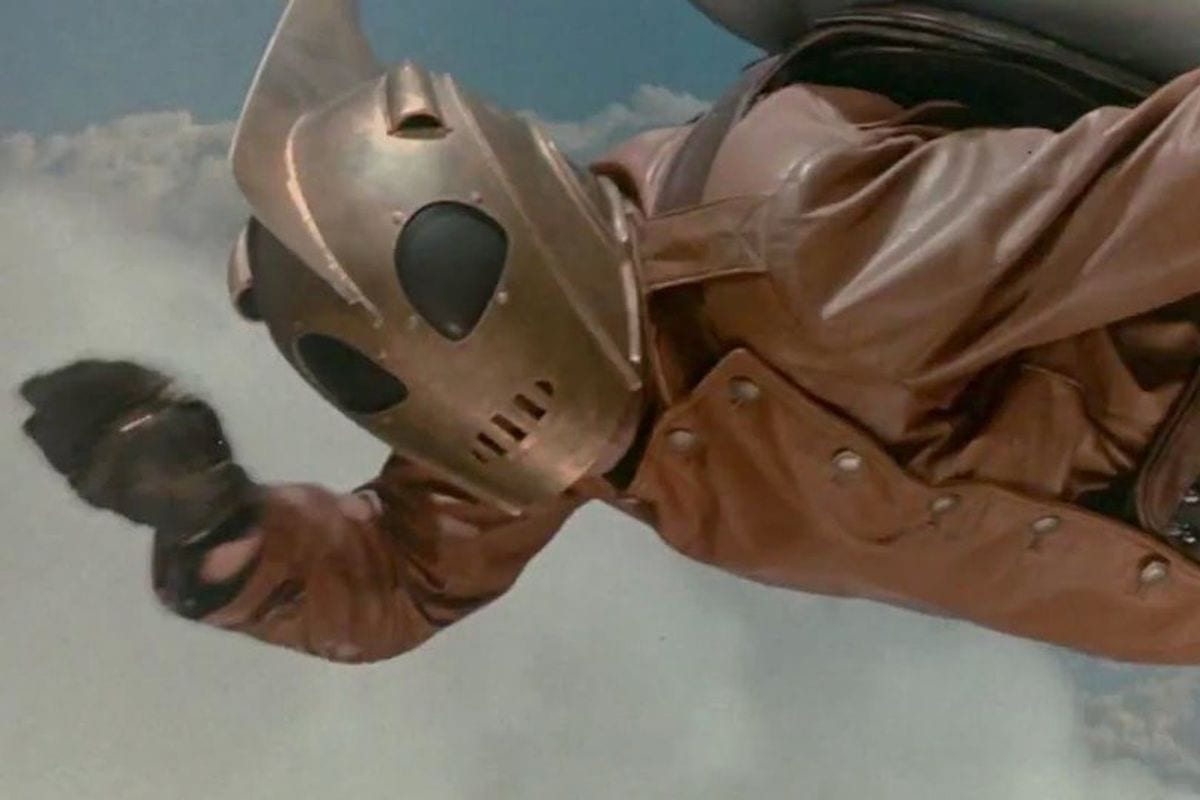 Dieselpunk has entered the world of gaming and grows in popularity by the day with games like Crimson Skies, Command and Conquer: Red Alert, and Sine Mora. These particular games, like most, give the audience an opportunity to immerse themselves deeper into the interwar aesthetic and become intimately acquainted with the impending doom of red skies freckled with rocketeered villains, enemy Zeppelins, and of course the occasional beautiful dame. It’s a mash of world war with just the right amount of optimism dashed in. Video games offer the unique advantage of the audience taking part in the various war machines and technologies of the era, which is a staple of the Dieselpunk genre. A player could hop on a floating diesel-powered motorcycle to speed across a city in one game and in another have access to a walking tank. The Scythe board game is a unique addition to the genre. While a player can’t physically see all the details of a World War zone, the vintage nature of the board game brings up the old aesthetics into the experience.

Needless to say, most people of the interwar time period wanted a decent distraction, one strong enough to wipe the dark grime from their minds. As one may imagine, Dieselpunk music draws its inspiration from jazz, blues, ragtime, bluegrass, and cabaret. The sound of the interwar period to calm the mind and loosen up the body makes its way into a modern reimagining of this jaunty music. There are new bands emerging that play music reminiscent of the interwar period. Most of which is some toe-tappin’ swing jazz or neo-swing revival, which is swing jazz with a little bit of rockabilly and boogie-woogie influences. To bump that up a notch Electroswing, a combination of electronic dance music (EDM) with equally prominent swing jazz elements, features bands like Caravan Palace and Tape Five that are especially good at emulating an interwar retrofuture vibe. Nothing like the threat of Nazi invasion to get you in a good swingin’ mood.

Or, maybe a little something closer to Dieselpunk home like in this video:

There is no shortage of Dieselpunk literature, especially in recent years. The literary genre may lend itself to lesser-known wordsmiths but it remains and grows rich with content. Dieselpunk novels and short stories abound. The likes of Tales of the First Occult War and Hard Magic: Book 1 of the Grimnoir Chronicles are prime examples of the era’s secret obsession with the occult. Dieselpunk novels tend to feature paranormal or supernatural elements which is something that the actual era didn’t devote as much time to. We have Hitler to thank for everyone’s immense fear of the subject at the time. The other side of Dieselpunk literature has an adventuristic spirit mingled with the grim tidings of war. Anthologies such as Dieselpunk ePulp Showcase features several tomes of short works from various authors featuring many stories of daring air pilots and crafty spies. As mentioned above, The Rocketeer was a film adapted from a comic book series from the 1990s, which allowed the character and idea more room to develop. The Rocketeer was the flip side of Dieselpunk, a more optimistic approach to a darkening threat of world war. Conversely, the novel The Man in the High Castle is yet another Nazi-themed book with a Dieselpunk flare for drab sensibilities.

Yes, Dieselpunk is a fashion style too with fedoras, pinstripe three-piece suits for the men and for the ladies pencil skirts and blouses. The fashion sense can even extend to the flapper girl era of the 1920s with a feather stuck in metallic hued headbands and body-hugging dresses. In some ways, Dieselpunk fashion reflects a conservative and austere outlook with its moody colors and less revealing attire. For those who walk the streets with a Dieselpunk wardrobe sensibility, the drab colors and extra layers only make their daily life more fun. Some people cosplay and others go so far as to dress like that every day.