David Fincher’s Se7en begins at a crime scene where an embittered wife has killed her spouse with a shotgun in their rundown city apartment. Detective William Somerset (Morgan Freeman) is one week away from retirement and wearily observes the scene. He asks the other detective present if the couple’s child saw the murder. The other detective is suddenly snapped out of something and annoyed at the question, his numbness and apathy towards the atrocities they see every day suddenly shaken. He makes a point of mentioning he is glad Somerset is going at the end of the week. Fresh-faced transfer Detective Mills (Brad Pitt) then walks onto the scene to introduce himself to Somerset, and the descent into hell begins. I always used to think this was a throwaway scene, but it is absolutely crucial at setting the themes and tone of a modern masterpiece.

Contrary to what you might think, there was an internet back in 1995, but it was decidedly different from what it is now. The world seemed a considerably bigger place back then, and we were all collectively outraged about one news story at a time, as opposed to multiple stories at all times. Studios hadn’t really gotten a handle on how to use the internet as a marketing tool, and movie websites amounted to little more than online word documents. We had this thing where people used to talk using their mouths, and quite often, if a movie was good you would hear about it through someone else first. They would tell you, you would see it, and then tell others. It was something called “word of mouth,” and thanks to THAT ending, Se7en ended up becoming one of the most talked-about films of the decade, and people kept showing up in droves. We had frankly never seen anything like it before, and during the scene below, my friend had to actually leave the cinema and throw up. 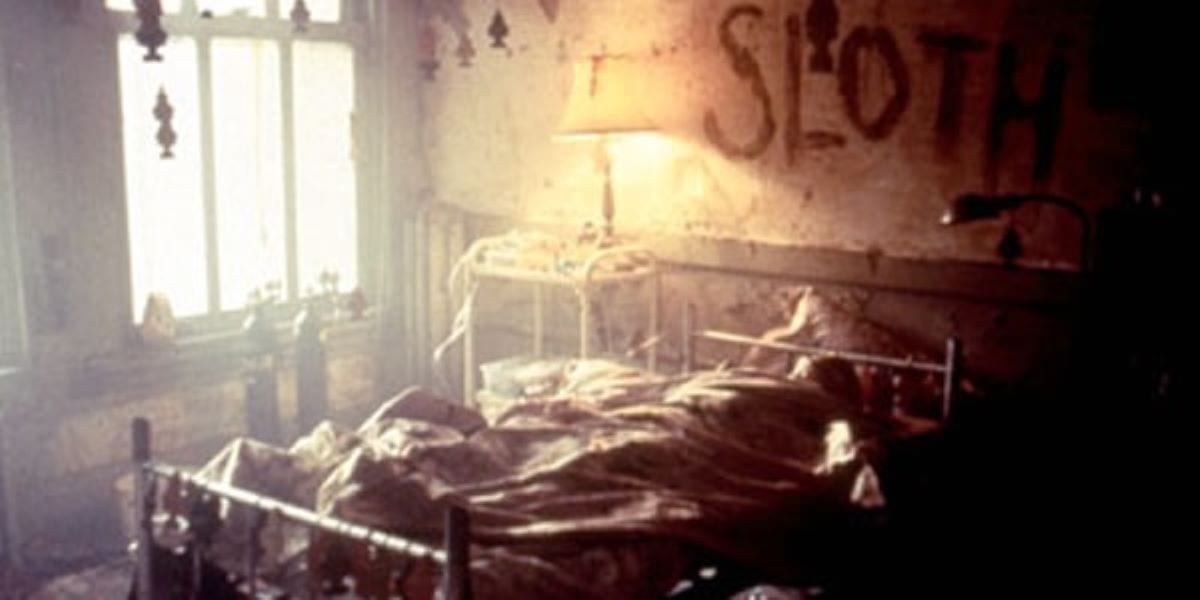 Prior to 1995, David Fincher had endured an awful experience with his debut feature film Alien 3 (1992). By the time Fincher came on board for the third film in that beloved franchise, the film had churned through years of development hell with multiple scripts and directors churned through the grinder. Fincher’s experience, by all accounts, was not a happy one, and nobody would have blamed him for walking away from the studio system entirely and going back to music videos. Lucky for us that he didn’t, and his next film Se7en would end up becoming a calling card for the rest of his career. Armed with a dynamite screenplay by Andrew Kevin Walker (Sleepy Hollow, 1999) with a killer hook, and of course those final scenes, Se7en was a comeback that so few artists get to have after a devastating flop.

Set in an unknown city constantly showered in rain and decay, Se7en follows Detectives Mills and Somerset as they launch an investigation into a killer with a fondness for the seven deadly sins. So after Gluttony and Greed, the remaining week sees Sloth, Lust, Pride, and of course Envy and Wrath in the most devastating ways possible. It’s not just a great screenplay that sets Se7en apart from the serial-killer pack—the film is amazing to look at, too. Shot by Darius Khondji, every dark apartment and rainswept street is a detailed work of art to get lost in. The film also has added authenticity in that it doesn’t shy away from the tedium of police work. Mills and Somerset often spend scenes sitting around, helpless as they do not know when the killer will strike next but are waiting on that crucial piece of forensics or dodgy tip-off. It’s a commitment to realism that made the film stand out from others of the time, with an alarming absence of action heroes using a police badge to kill bad guys indiscriminately. 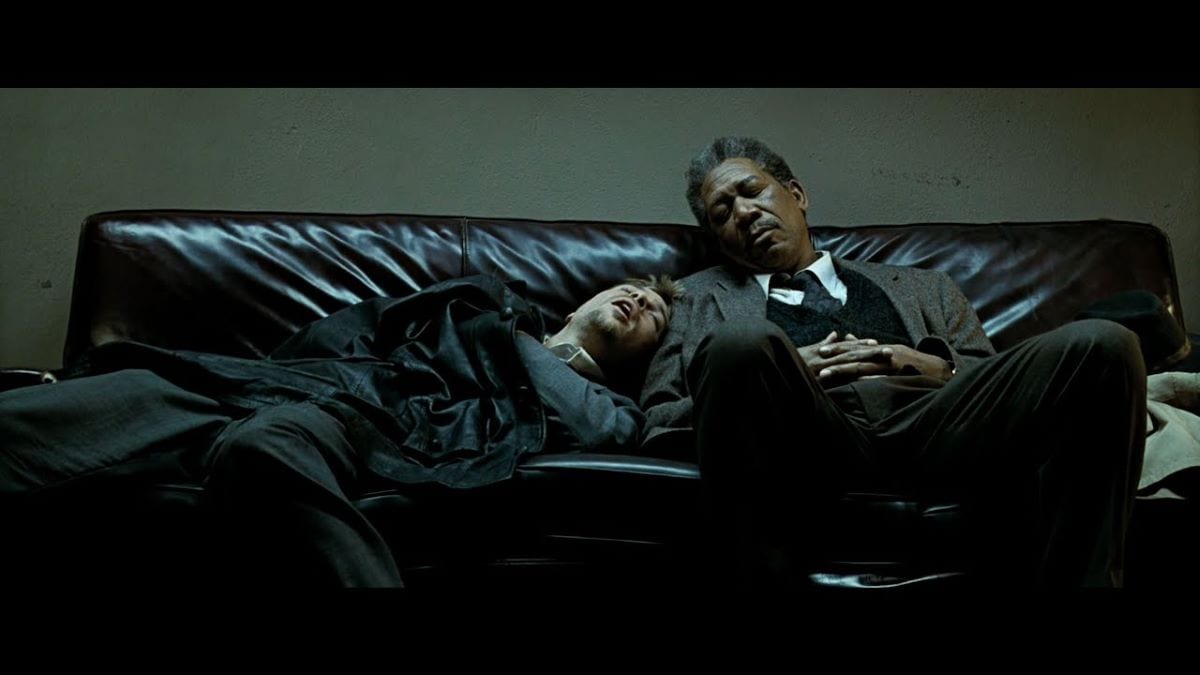 As the film goes on and the killer calling himself “John Doe” ramps up his campaign, the pace also picks up, keeping us on the edge of our seats with a perfect score by Howard Shore that gives the film a brutal, hopeless life in every frame. The performances by the two leads are also some of the best work of their respective careers. Morgan Freeman set himself here to be typecast for the next 10 or so years as the kindly mentor/slightly world-weary authority figure. In Se7en this performance feels a lot more subtle and moving. Freeman has many moments where he is clearly a broken man, not just through dialogue, but with the weariness and hopelessness seen on his face in certain scenes. Brad Pitt was on a roll when Se7en came out and was enjoying box-office success as a leading man. Se7en was the latest in a series of films where he was trying to escape his pretty-boy image, and he works brilliantly here as the person on whom the audience hangs its perspective, initially cocky but finally a tragic, sacrificial figure in the finale.

Back in the day, Se7en opened with a $13 million domestic opening weekend. That kind of figure nowadays is an instant box-office disaster nowadays, but thanks to the old magic of word of mouth, Se7en then ended up with a $100 million domestic gross, then made three times that worldwide when all was said and done. Se7en came along at a time when the modern mid-budget studio thriller was still heavily influenced by the box-office successes of The Silence of the Lambs (1991) and The Hand That Rocks The Cradle (1992). It feels like a film that was greenlit as a reaction to other films, and yet it set its own template for the thriller for the remainder of the decade. Lots of films came after that felt very influenced by Se7en’s style and, in particular, its marketing and opening credits. However, crucially all of these imitators didn’t dare go as far as Fincher and Andrew Kevin Walker went with the nihilism and hopelessness. As a result, even now, nothing has ever come close to really replicating this film, and even Fincher’s actually pretty-good followup The Game (1997) was seen as something of a letdown with its relatively conventional ending.

Let’s talk about Se7en’s ending then. You have a situation where John Doe (Kevin Spacey) has given himself up, seemingly having not completed his full seven-sins murders. Through another slimy lawyer we learn there are two more victims, but Doe will only reveal their locations if Mills and Somerset agree to drive Doe to a certain location at a certain time. The detectives agree, and away from the city and the rain, it is revealed that Mills wife Tracy (Gwyneth Paltrow) is a victim of Doe’s “Envy” and has been beheaded. The idea being that Mills then becomes “Wrath” and makes Doe the last victim. On one hand, you get a satisfactory death for the killer, and on the other hand, John Doe actually won. He made his point and completed his seven murders.

Back in 1995 greenlighting a movie with this kind of a downbeat ending was not something that was done, and forget about today—the film wouldn’t even make it to production. This was seen at the time as the first big non-comedy, non-Freddy Krueger production by New Line Cinema and was their chance to get actual acclaim and kudos. There was some discussion about keeping the ending in place, and an alternate safer ending was storyboarded and scripted for executives, but Brad Pitt of all people said he wouldn’t do the movie if the ending was changed, and the rest is history. It is an echo of a different time—a movie star using movie-star clout and a studio willing to take a risk. 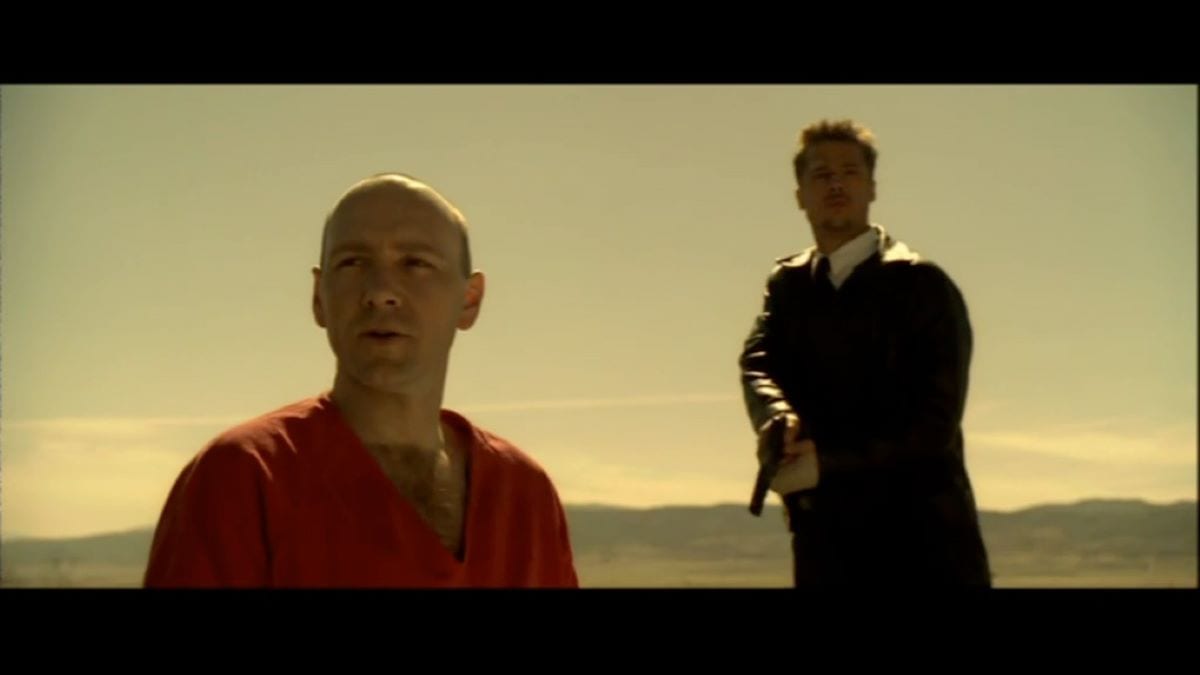 It is a weird thing seeing Se7en 25 years later. It feels like a film made at a time by people who looked around and saw nothing but hopelessness. They saw nothing but apathy in the streets, people constantly looking the other way, and thus characters were born. The danger of apathy seems to be the main point of Se7en. John Doe is pointing out everyday atrocities—laziness, lying, a general lack of morals—and all his victims outside of the final two are morally dubious at best. Thankfully 2020 does feel like a decidedly different time from 1995. Things are perhaps more hopeless than ever, and yet I feel like the same level of apathy isn’t really there anymore, and people seem a lot more motivated to point out atrocity than ever before. Whether they actually do something more than point it out is a wider discussion for another time.

This is the lasting legacy of Se7en, the importance of not looking the other way, of not giving up and not tolerating the status quo. The killer may have expressed his message in a despicable way, and yet he shook people out of the funk they were in and made them think. It was the exact kind of environment that allowed someone like John Doe to be born and thrive in the shadows. During one key scene in a car towards the end, Detective Mills berates John Doe as a crazy person, someone who will not be a legend, and a future half-remembered joke. This scene harkens back to the opening scene, another citizen shaken out of their apathy and reacting with anger. The devil was created by human weakness, and he always wins.