A Bluebird In My Heart is Parisian novelist turned writer/director, Jérémie Guez’ feature debut. Its English title is a refrain taken from Charles Bukowski’s confessional poem “Bluebird.” Although the poem is never directly referenced in the film beyond its title, the film certainly reflects its central theme: the vulnerabilities and emotions that men have to repress to maintain their image of masculine toughness. The muscular, tattooed, bearded protagonist Danny (Roland Møller) is, like Bukowski, a working-class jack of all trades who hides his deeper feelings beneath a brooding, reticent exterior.

Adapted from a crime novel, The Dishwasher from novelist Dannie M. Martin, there’s an old school hard-boiled feel to this film, but it is incredibly intimate, melancholic and beautiful to watch too. 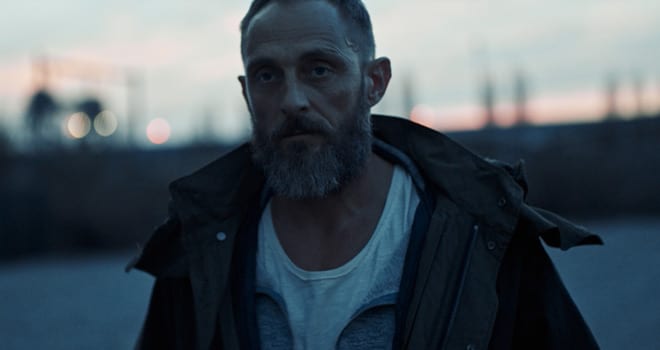 Fresh out of jail and on a tag, Danny settles in a rundown hotel run by single mother Laurence (Veerle Baetens), and he agrees to fix up one of the rooms in exchange for a month’s board, while also taking a job washing dishes in a nearby Chinese restaurant. He is keen to lay low and stay as clean as the kitchen space he meticulously clears of grime and dirt (honestly, I could watch these scenes forever—those restaurant kitchen power washers are so satisfying), Danny likes to keep to himself—but Laurence’s troubled teenage daughter Clara (Lola Le Lann out “Natalie Portman-ing” Natalie Portman in Leon/The Professional), whose father is in prison, is desperate for someone to fill that role, and ever so slowly Danny settles into it. Then, when Clara is raped by a local drug dealer, Danny responds in the only way he knows how—by beating him repeatedly to the point that he gets his tooth embedded in his knuckle, then setting him on fire—and trouble once more comes looking for him. 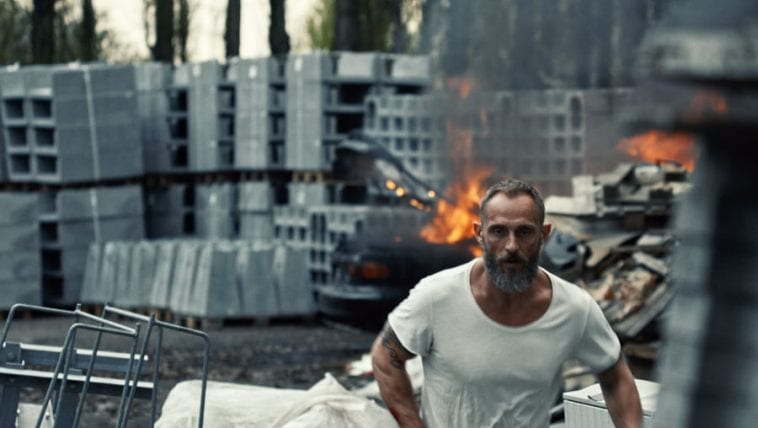 “Try to be patient,” Danny tells Laurence in one scene, and it’s hard not to think he’s trying to reassure us too, as the film is an undoubtedly slow burn. Yet all the deliberately slow-paced tensions build to explosions. Although the film is shot in handheld and maintains a naturalistic style, its plot is woven like a classic noir. For while Danny may be out of prison, he is still very much caught in a trap that is in part of his own making, in part a mechanism of circumstance that he just can’t seem to escape from. The story—though full of clichés—is stripped right down as we watch this man always struggling and never able to leave behind his history of violence and to live, in his halfway house, in something close to a normal family life. Like the stray dog that Clara keeps trying to befriend, Danny is all at once adorable and menacing, with Møller’s quiet, disciplined performance leaving us in no doubt that Danny is capable, but we’re not sure of what exactly, until he shows us.

All of the actors embrace their characters fully and the simplicity of the plot is welcome. All of the pieces are put in place for an eventual collision course, but because the film is in no hurry, the characters are allowed to breathe. We never learn a whole lot about why Danny was in prison, or why Clara was always looking for trouble, but we come to understand them through their actions and interactions. 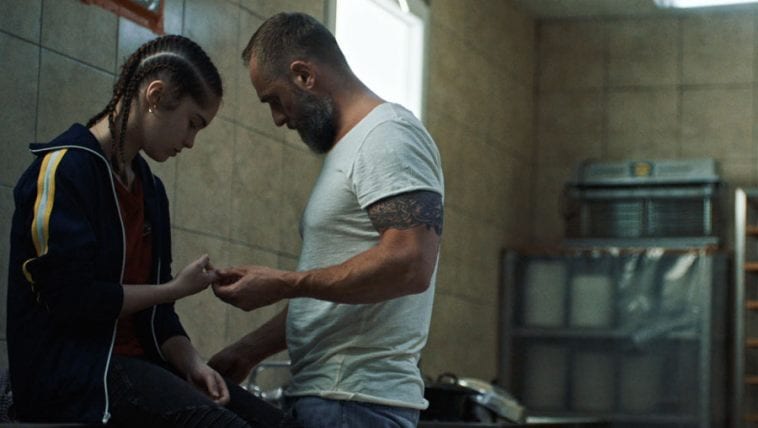 Not knowing about Danny’s past certainly added a sense of dread to some scenes for me. I guess we as viewers are so used to there being shocking twists that turn stories on their heads that we expect it now. I questioned whether Danny could end up being the bad guy, or at least perceived that way by the police or Laurence. Would Clara reel him in then turn on him? I was surprisingly pleased when it all turned out to be very straight forward and honest. I questioned Danny’s motives several times, but I think my logical brain needed to give some space to Danny’s big heart. After Clara is attacked, he carries her home and puts her in the bath, helps her undress and washes her down. It’s actually a very beautiful scene, as the pair bond like father and daughter, but he is not her father. He is a stranger, pretty much. She’s just been raped, and now another man is taking her clothes off and washing her battered, naked body. Despite him looking away as much as he could, I couldn’t help but think this was a terrible idea. Also washing away the evidence was not a good plan. 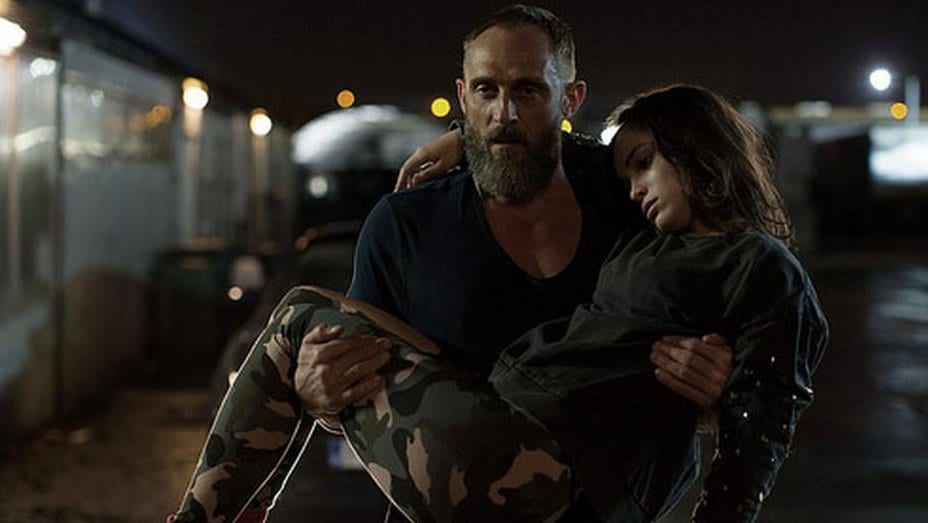 I know why he did it. He wanted Clara to feel clean as soon as possible and get her head straight. He did not allow this to break her by letting her fester in the smell and the dirt. In some ways, it was an admirable thing to do for her as it put him in a very precarious position. I know why Clara didn’t freak out about it either; she trusted Danny and needed someone who could calm and protect her right at that moment. Calling the police wasn’t really an option in Danny’s eyes. He wasn’t likely to trust them to get justice for Clara, and it would have been extremely easy for them to pin the crime on him, leaving the rapist to walk free. Danny’s justice was way, way more violent. Did the guy deserve it? Definitely yes. But seeing it dished out was not satisfying, it was brutal—as it should be. With a modern, sometimes sweeping and often delicate score and an intimate camera style, the tension builds without ever jumping into unrealistic action set pieces or theatrical violence. What conflicts do emerge feel lived in and off the cuff the way most real-life violence plays out.

Danny isn’t a hero; he’s just a guy with a dark past trying to do right by the people who matter to him. Clara isn’t a Lolita type figure; she’s just a girl trying to find her way in a complicated situation. She’s living a very dull life for a teenager with apparently no friends her own age. She puts her absent father on a pedestal despite him being a criminal; even when she learns that when he’s released he won’t be returning home, he’ll be moving in with another woman he’s met. Laurence is a mother doing the best she can with the cards she’s been dealt. It’s a blue-collar story through and through, and it feels as grimy as the dish rooms and back alleys it takes place in. 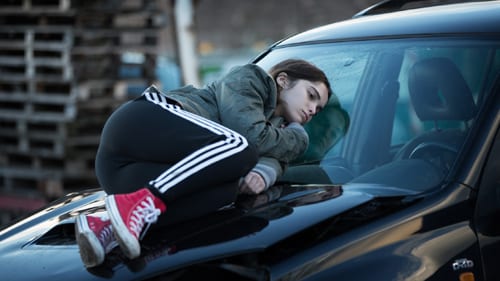 While A Bluebird In My Heart is nothing new, the nostalgic feeling to the way the story plays out and smaller character pieces make this, dare I say it, an intimate and sweet revenge movie. Outstanding performances and old school tension are the key ingredients here. The feelgood scenes at the very end should have been left out—less is always more in my opinion, even if it leaves you a little depressed, it’s better to have hope than cheese.

there’s a bluebird in my heart that wants to get out
but I’m too tough for him,
I say, stay in there, I’m not going to let anybody see you.

there’s a bluebird in my heart that wants to get out
but I pour whiskey on him and inhale cigarette smoke
and the whores and the bartenders and the grocery clerks
never know that he’s in there.

there’s a bluebird in my heart that wants to get out
but I’m too tough for him,
I say, stay down, do you want to mess me up?
you want to screw up the works?
you want to blow my book sales in
Europe?

there’s a bluebird in my heart that wants to get out
but I’m too clever, I only let him out at night sometimes
when everybody’s asleep.
I say, I know that you’re there, so don’t be sad.

then I put him back,
but he’s singing a little
in there, I haven’t quite let him die
and we sleep together like that
with our secret pact and it’s nice enough to
make a man weep, but I don’t weep, do you?

Laura is the Assistant Editor-In-Chief, a Writer and Hand to the Webmaster at 25YL. She has been part of the team since May 2017 when she began writing about her favourite TV show of all time: Twin Peaks. She currently Heads the Film, News and Gaming Departments.

Lula Fortune (Wild at Heart) and Lee Holloway (Secretary) are her spirit animals. Her other hobbies include singing horribly and rarely sleeping.

Laura lives down by the sea in Gower, Wales, with her husband and very special little boy.