One of the biggest areas of debate in our modern times is whether or not people should be given second chances. Cancel culture runs rampant in the news and on social media, with a new celebrity, politician, or regular run-of-the-mill person having their lives torn apart on a daily basis. Caroline Poggi and Jonathan Vinel explore this pressing issue and ask whether it’s possible for people to change in their first feature-length film, Jessica Forever.

Jessica Forever is a French film that revolves around the mysterious character of Jessica and a group of orphaned young men that she has taken in, in order to protect them from a society that chooses to exterminate those on the margins rather than rehabilitate them. All of the orphaned boys are predisposed to violence and the film slowly reveals the horrific, violent acts that some of them have committed during their young lives. Jessica and her chosen family live constantly on the run both from the bullet-wielding drones controlled by the Special Forces and from their own violent pasts.

Poggi and Vinel, when talking about the film, describe the story as representing “a generation haunted by violence and starving for connections,” and the film definitely delivers on both of these themes. Jessica Forever feels very timely, even though the location and time period in which the film takes place is left up to speculation. The young men in this film perfectly encapsulate the nihilistic mindset that must be overcome by a generation who can’t trust the police to protect them, who can’t even feel safe going to school, and who live every day with the fears of climate change and nuclear warfare. These boys are pushed outside of society, with their only choice being to accept being called monsters and continue their violent paths until they are met with a bullet through their skull.

That is until they meet Jessica. Instead of ignoring and alienating these boys, Jessica decides to take them in and do her best to prove that no one is undeserving of the chance to change. She offers these young men empathy, forgiveness and a sense of purpose, helping them believe that they deserve to live a life full of love and community. Inspired by a mix of film, TV and video game characters like Lord of the Rings’ Arwen, Quiet from Metal Gear Solid V and Buffy the Vampire Slayer, Jessica is a mother, sister, army sergeant, and teacher all at the same time. We don’t learn too much about who she is or where she comes from, but we do understand her motivations and goals, her connections and hopes for the young men she cares for.

Jessica Forever is a beautiful film, both aesthetically and thematically. The cinematography and color correction is impressive and the directorial team of Poggi and Vinel create impactful and painterly images in every single frame. They also do a great job of creating a world that feels both real and fantastic. There are many elements of magical realism throughout the film—from Jessica’s empathic powers to sparkly, sentient green blobs that can materialize into deceased loved ones—but the story never feels unbelievable and I never found myself taken out of the moment by something seeming out of place. Of course, you are left with questions, since none of these magical elements are ever explained, but the answers to those questions don’t really matter to the tone of the film. I blindly accepted everything that happened as a believable truth and that speaks volumes towards the creative talents of the team behind this film.

I can honestly say that I have never seen a film like Jessica Forever before. The juxtaposition of hyper-masculine men with typically-feminized actions like hugging, nuzzling and hair-braiding left me feeling almost uncomfortable at times and had me questioning why I ascribe gender to these types of physical expressions at all. The boys go from working out and firing machine guns in one scene to holding one another and napping together in another. One of the most effective scenes for me involves music, which plays a huge role in the film overall as it acts almost like the heartbeat of the film. After a traumatic event rocks the renegade group, one of the boys blasts a piece of music throughout their compound, which results in Jessica and all the boys stopping what they are doing as they are all overcome. In a scene that would feel right at home in The OA, the group dances together and apart, using rhythm and movement as a silent expression of their grief that connects with the audience in a way no dialogue ever could. 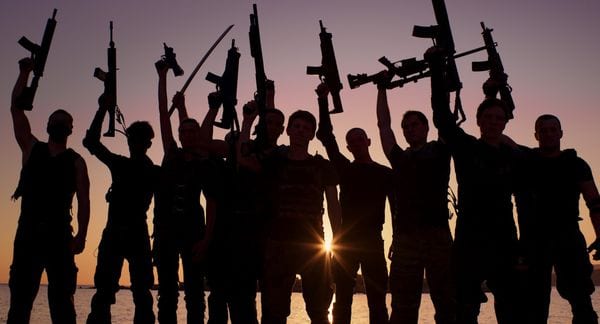 Through watching this short slice of life of these boys, you connect with them so intensely that you find the violence they are capable of hard to believe. Whether it’s actions from their past, like murdering their own sister in cold blood, or something they commit over the course of the film, like self-immolation, I found myself willing to forgive these boys for their dark sides because I’d already seen their light. Poggi and Vinel make a smart choice here, letting the audience see the kindness and gentleness that the boys are capable of in a safe and loving environment before telling us the violence they were compelled to commit in a society that treated them like garbage.

Many people will probably argue that this film is not horror and wonder why it was picked up by Shudder, but I’d be quick to argue that that reaction is the horrific truth of Jessica Forever. Poggi and Vinel suggest that “the greatest violence of all is the world in which we are asked to live,” a world where we enjoy watching people suffer on the margins of society with no hope of change and then act surprised when they turn to lives of crime and violence. We barely bat an eye at school shootings or domestic violence, but we recoil in horror at the thought of giving a second chance to someone who wrote a misguided tweet ten years ago. The prison system focuses on recidivism rather than rehabilitation and toxic masculinity expects men to use force rather than express their feelings. Jessica Forever is a timely and timeless answer to the horrors of Western society and leaves us with a motto to take into the dark days ahead: bad things don’t last forever; we have to stop them from lasting.