A century has passed since The Cabinet of Dr. Caligari premiered at the Marmorhaus theatre in Berlin, on 26 February 1920. The influence of this film—which is considered now as a classic of German Expressionism—can be traced through the history of cinema up to the present day.

Expressionism, like any other movement in art, had its social and cultural preconditions which became even more acute after World War I. Crisis of the individual in the industrial era, a militaristic society and defeat of Germany in WWI with resulting isolation and economic crisis, and the destruction of the old value systems were among the contributing factors. In these adverse circumstances to the individual, turning inwards to the subjective world, as opposed to the outer reality, seems only natural.

The years preceding expressionist cinema was also the period of the origin of psychoanalysis. I can see it as both the result of repressive reality and the potential solution—hence a growing public interest in psychoanalysis. There was also an interest in spiritual practices against the declining role of traditional religions. Art, in general often acts as a mirror that reflects the processes going on in society. This can be said about Expressionism in our case. The distorted reality, the uncertainty of what is real and what is false, freedom and free will, power of authority, and power for influencing people, sanity vs. insanity—these are the topics reflected in The Cabinet of Dr. Caligari.

The idea of The Cabinet of Dr. Caligari was conceived by the writers Hans Janowitz and Carl Mayer and was inspired by several events from Janowitz’s real-life experience. The writers later sold the script to Erich Pommer who initially offered Fritz Lang to direct the film, but as the latter was busy with another film, Robert Wiene was finally chosen as a director.

The expressionist style of set design with distorted and disproportionate forms was a deliberate choice of designers (Hermann Warm, Walter Reimann, and Walter Röhrig). They believed it would be the best fit for the dark mystery story. 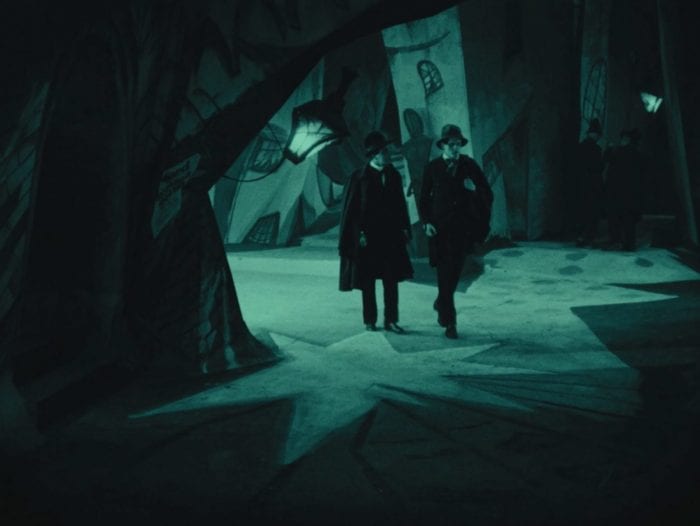 The visual style of the early expressionist films like The Cabinet of Dr. Caligari was to a large extent determined by the economic factors. They simply couldn’t spend much on the decorations and had to make it as simple and cheap as possible. The use of limited, unusually small space with painted decorations, even painted light effects, was, of course, a great solution for saving money. But luckily, it was also responsible for the unique style of the film, creating the film’s unrealistic, fantastic atmosphere that emphasizes the prevalence of the subjective perception of reality vs. objective reality.

The performance of the actors, especially, that of Werner Krauss as Dr. Caligari and Conrad Veidt as Cesare (both these actors had the experience of working in expressionist theatre) also helped to create that dark, exaggerated, unrealistic mood. These characters truly belong to the fantastic world of the film. 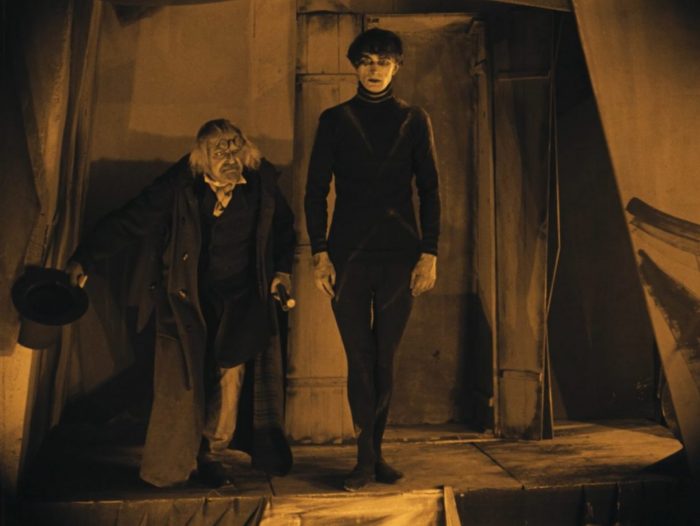 Watching The Cabinet of Dr. Caligari once again, I constantly recognized the details, character types, or themes from the later films, be it noir or modern horrors or psychological thrillers. Just to mention a few; the theme of uncertainty about reality, the existence of false reality, when you can never be sure which narrative is real and which is the result of delusion (Martin Scorsese’s Shutter Island first came to mind). The twist in the narrative with swapped personalities reminded the finale of David Lynch’s Mulholland Drive. Hypnosis and controlled, manipulated behavior, a person compelled to do things under the influence—there are so many films about this. The double identity, the evil personality taking over the socially adapted one (the shadow personality of the mystic Dr. Caligari which takes over the character of the director of the asylum).

The film starts with the young man, Franzis (Friedrich Feher) talking with an older man on a bench. The man is telling him that there are spirits around us who were responsible for taking him away from home. This tells us already from the very beginning that the film will be dealing with something beyond ordinary. We see a ghost-like woman, but it immediately becomes clear that she is real. Franzis tells the man that it’s his fiancée, Jane (Lil Dagover) and that they had been through the even stranger and darker events.

Franzis begins his story with a fair in his home town. The fair itself is an interesting place—various funny and unusual things can be seen there. If something weird should be happening in the story, it can perfectly fit in the context of the fair. This is the place where strange things belong because they can attract public attention. Dr. Caligari uses the show at the fair to mask his crimes. He brings with him a somnambulist—Cesare who, when awakened by Caligari, supposedly can tell the future. But it’s very easy to predict the future of a man who you are going to kill that night, isn’t it? That’s precisely what happens to Franzis’ friend, Alan.

Alan’s murder scene is worth mentioning. The murder is shown as a shadow. Cesare’s shadow creeping up on Alan reminds of the scene in F.W. Murnau’s Nosferatu where Graf Orlok’s shadow is creeping up on Hutter. The knife Cesare is holding makes you think of Alfred Hitchcock’s famous shower scene from Psycho. 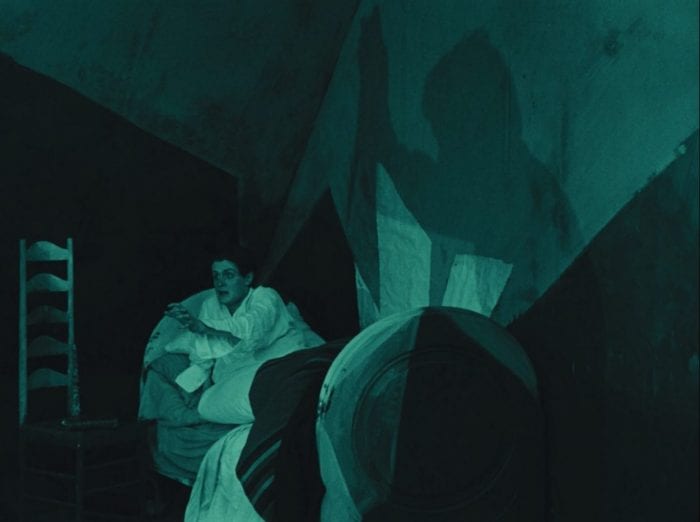 As I said, Cesare is a somnambulist; he has slept whole his life. He only awakens when Caligari tells him to and predicts the future. Then Caligari instructs him to kill people and Cesare obeys him, until he goes to kill Jane, but instead kidnaps her. Apparently, Jane’s beauty is stronger than Caligari’s suggestive force.

Eventually, Caligari’s crimes committed through Cesare are discovered and he flees. Franzis follows him to the asylum. There he discovers that Caligari is, in fact, the director of the asylum who is obsessed with the secrets of an Italian mystic Dr. Caligari. The story of this mystic is similar to what we saw. The director wants to know if it is really possible to control the sleepwalker so as to make him do the things he wouldn’t normally do, even commit murder. So he assumes the personality of Dr. Caligari and repeats his crimes. But the final twist reveals something completely different: Franzis turns out to be the one who is insane. He is the patient in the asylum and in his delusion believes that the director is Dr. Caligari.

On the subject of themes of the film, there is one more that goes beyond the typical horror tropes and may be interpreted in social rather than psychological context. It’s the theme of authorities abusing their power. (This takes my inner nerdy personality to Fritz Lang and his films Metropolis and M). Dr. Caligari can be seen as a metaphor for the abuse of authority. The film also contains the scenes with the actual representative of state authority town clerk who is sitting on an unusually high chair and not being in the mood that day, acts quite rudely toward Dr. Caligari. (Of course, he pays for it soon with his life.) 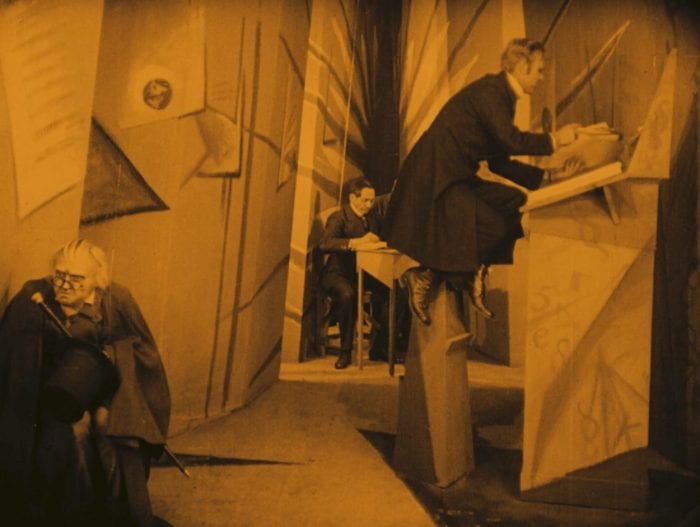 The frame story of Franzis as a patient of the asylum seems to be a reasonable explanation of the strange events of the film: Dr. Caligari doesn’t really exist and the whole story was the construct of Franzis’ delusional fantasy. All the characters from his story are the patients of the same asylum; he just changed their roles. The person believed to be Dr. Caligari is the director of the asylum. Everything turns out to reasonable, if not the last frame—the close-up on the director. The final frame raises suspicion again: what exactly is real and what is a delusion in this film? Is the director going to cure poor Franzis, or he aims to put him under his control, pushing into more madness?

As I already mentioned, The Cabinet of Dr. Caligari contains the seeds for so many themes or expression forms and moods that later became typical for film noir and horror films. These themes are still relevant, which means that problems of the society or individuals that defined the Expressionist movement are still present, regardless of the different socio-political situation. And it’s not surprising—the darkness of the human soul will exist in any epoch and any society, becoming more apparent in crises. Consequently, art forms reflecting and dealing with that darkness will always stay relevant.