I can count the amount of times I’ve backed a crowd-sourced video game on one hand, but Battle Princess Madelyn caught me at a particular time in my life. A few months prior, my wife had given birth to our baby daughter— also, I’d just beaten Super Ghouls ‘n Ghosts for the first time.

One was the proudest moment of my life—hours of agonising screams and visceral panic followed by pure bliss and relief when it all finally came to an end.

Somehow, these two completely unrelated events came together in a bizarre synchronicity in Battle Princess Madelyn.

Developed by Casual Bit games, Battle Princess Madelyn had been successfully funded on Kickstarter in early 2017. In the campaign video, Chris Obritsch explained that he’d been inspired to create the game after a conversation with his young daughter, Madelyn.

Whilst playing Ghouls ‘n Ghosts, Madelyn remarked that she wished she could be the hero instead of Arthur.

“That’s someone else’s game,” he explained. “but maybe Daddy could you make you your own game?”

“But girls can’t be knights…” she replied.

“Pfft—What colour do you want your armour?”

My own, newly born daughter was yet to express an interest in medieval warfare, but I’d be damned if I wasn’t going of support the right for little girls everywhere to wield a broadsword. With a mix of paternal pride and wistful nostalgia I backed the project and patiently waited for the game to release. 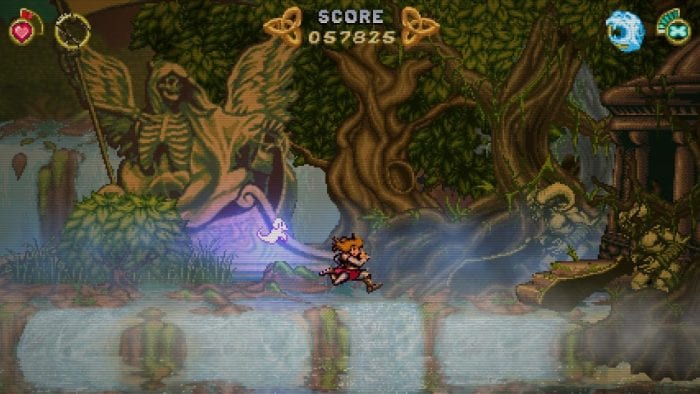 The story mode feels strangely wholesome for a video game. Not only does (the real life) Madelyn star in the game, but also her pet dog, Fritzy, and her ‘Grampy’—both of whom are given a posthumous dedication at the start. Other family members pop up too, including Chris himself as King Daddy. Higher-tier backers of the Kickstarter campaign also appear as quest giving NPCs. It all feels very personal and sweet, but some may find it a little too overt; preferring to jump straight into the no-frills arcade mode instead.

Arcade mode is where veterans of the Ghouls ‘n Ghosts (and Ghosts ‘n Goblins) series will feel most at home. Battle Princess Madelyn wears its inspiration proudly and with exquisite detail. Everything from Madelyn’s goofy running, jumping, and climbing animations, to the bouncy, ‘spooky’ soundtrack perfectly apes Capcom’s classic coin-op.

Controlling Madelyn feels immediately familiar, but the more perceptive player will notice the welcome advantages that she has over Arthur. 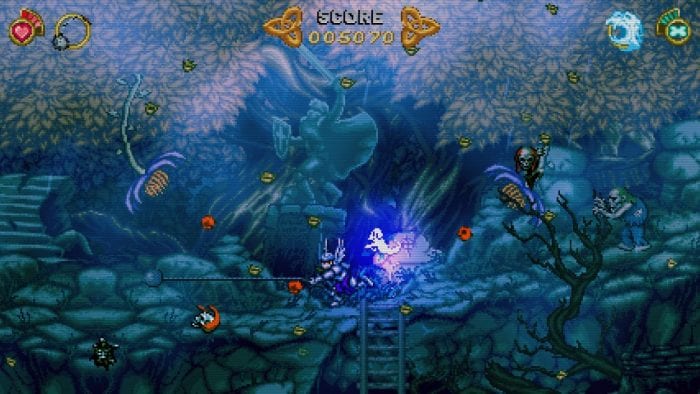 Like Arthur, Madelyn starts the game with armour that can protect her from a single blow; whereupon it will shatter, leaving her defenceless against further attacks. Also, like Arthur she can find upgraded armour which enhances her attack. Crucially (unlike him) it also enables her to take extra hits beyond what the standard armour provides.

The double jump from Super Ghouls ‘n Ghosts is here too, but mercifully the player can now control the character’s momentum in mid-air. As a result, Madelyn feels far more responsive to control than Arthur, and thus more enjoyable too.

Most of the weapons you’d expect are here—Lance, Dagger, Sword, Axe, etc— along with a host of new ones too. Whilst some are certainly more useful than others, they’re all fun to use, especially in their powered-up forms. One particularly nice addition is a Castlevania style whip; it made me feel like I was playing a crossover I never knew I needed.

Fritzy, the ghost dog, who closely follows Madelyn, comes in handy too. Holding down the attack button for a few seconds before letting go will charge and unleash the spectral hound, causing it to seek out and kill an onscreen enemy—useful for taking out those in hard-to-reach places. This attack uses up some of Fritzy’s power meter, which can be gradually refilled by killing more enemies.

Also tied to this power meter is Fritzy’s ability to resurrect Madelyn. If there’s enough charge, he’ll be able to bring her back right where she fell. If not, the stage will need to be tackled from the very beginning. 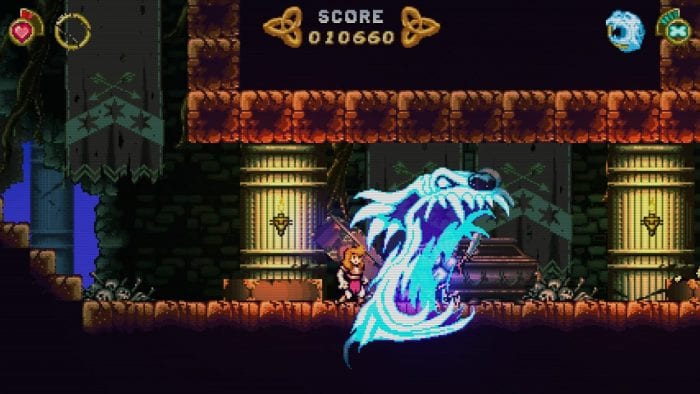 The endless hordes of undead that stand (or slouch) between Madelyn and the end of each stage are immensely satisfying to dispatch. Most take several hits, each connecting with a loud and pleasing ‘thwack’, before exploding in a shower of collectible coins.

The minute-to-minute gameplay in Battle Princess Madelyn is superb—on par with any game of its ilk. It’s clear that Casual Bit Games understood the ‘feel’ that makes ’90s arcade games so satisfying to play.

Like those games though, Battle Princess Madelyn doesn’t shy away from feeling unfair. Oftentimes you’ll find yourself in inescapable situations as the undead or their projectiles descend from all sides. Thanks to Fritzy’s resurrection ability though, these situations are a lot less frustrating than they would have been with a traditional ‘lives and continues’ system.

There’s a nice variety of enemies throughout the game too. Skeletons and zombies are the most common, and they constantly clamber out of the scenery, ambushing the player from all angles. Beyond that there are mutant plants, rabid sheep, demented mermaids, and a whole host more, plus a unique boss at the end of each stage. All are brought to life with gorgeous, pixel-art sprites that ooze character. 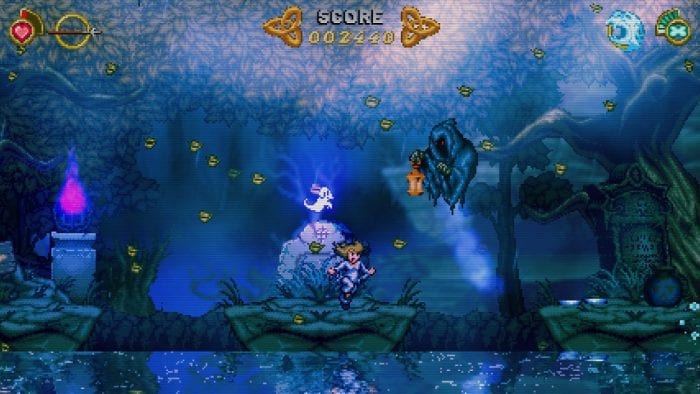 The stages are highly impressive too—at least for the most part. The opening stage is a particular highlight, taking place in an autumnal graveyard. The screen is packed with detail from the trees rustling against the midnight-blue sky in the background, to the golden leaves falling in the murky mist in the foreground. Beneath it all lies a glistening, fast-flowing river reflecting the action taking place on the weathered ruins above. The production value and artistry on show here is closer to Metal Slug than it is to Ghouls ‘n Ghosts.

Sadly, this high standard doesn’t quite carry through to the other stages. That’s not to say that they look bad, far from it, but they certainly pale in comparison. One such example is the second stage: a whimsical fairy-tale forest. Here the foregrounds and backgrounds are comparatively static and brightly lit. It all looks somewhat flat, and jarringly so, almost as if we’ve jumped from arcade original to home console port.

Thankfully that’s the most extreme example and there are plenty of other interesting locations to play through. Later in that same stage for instance, lies a dank cavern, filled with shimmering waterfalls which looks gorgeous. Many of these darker areas utilise some excellent dynamic lighting too with the sprites reacting to flaming torches and the like. 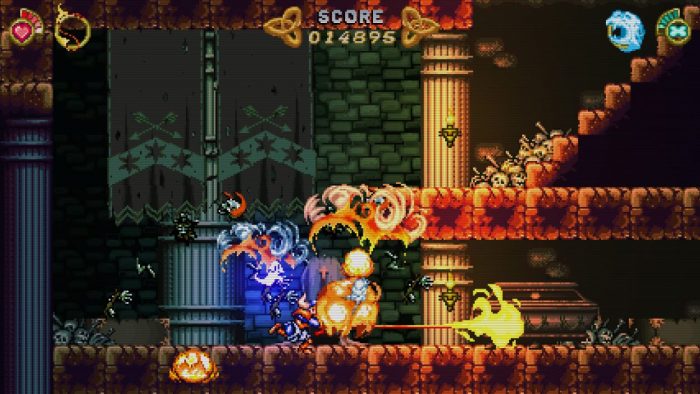 If there’s one area where Battle Princess Madelyn does fall short of Ghouls ‘n Ghosts, it’s in its level design.

In Super Ghouls ‘n Ghost for example, the player is fed new challenges at a perfect pace. The first stage begins with a constant, steady, ambush of zombies rising from the ground; a baptism of fire that forces the player to learn how to attack and dodge. The shifting ground and stone pillars teach the player the importance of the double jump in a safe environment, and without the threat of bottomless pits. Further on, the player must avoid falling rocks by watching for patterns and learning their timing. More dangerous platforming challenges are introduced as the ground is eroded away by tidal waves, requiring the player to be fast, decisive and accurate—and so it goes on. This masterclass in level design isn’t limited to the first stage either—each section of the game feels just as deliberate as the last.

In comparison Battle Princess Madelyn feels a little haphazard. New enemies are introduced in quick succession, and often at the same time. Platforming challenges and timed obstacles are typically only made difficult by awkward enemy placement or blind jumps. Sometimes, it can be easy to mistake background scenery for interactable platforms leading to frustrating deaths. In some of the larger levels you can even feel like you’re getting lost.

The last point is especially prevalent in the almost Metroidvania-esque story mode. Here, there are branching paths and doorways which lead to sub areas, which in turn lead to a different location on the main area. The verticality of the stages doesn’t help either, as progression can often require the player to traverse in all directions.

Whilst certainly an issue, I never found my enjoyment being hampered too much. Controlling Madelyn and making skeletons explode is just so endlessly satisfying; most of the time I was having too much fun to care. 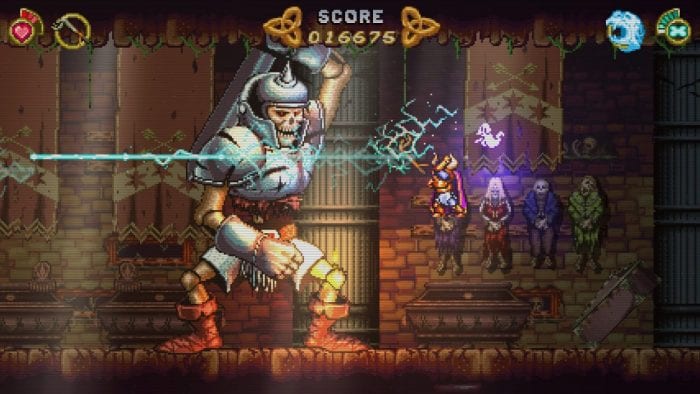 Despite its flaws, I enjoyed Battle Princess Madelyn’s story mode quite a bit. With games such as Hollow Knight having set the bar so high for 2D indie games though, it’s hard to make a good case for it.

The game effectively takes the mechanics of Ghouls ‘n Ghosts and adds a more structured approach to progression. Weapons are no longer dropped by enemies but instead need to be found or unlocked. Armour needs to be upgraded by a blacksmith, who requires materials and cash. Even the double jump needs to be acquired. Add to that a host of optional side quests to complete and NPCs to interact with and you have a campaign that can last upwards of 10 hours.

You’d be forgiven for thinking it all sounds like unnecessary faffing, yet somehow it works reasonably well. The incentive for progression and for exploring the large levels is surprisingly rewarding. It’s far from perfect but at the very least it shows that a Ghouls ‘n Ghosts style Metroidvania certainly has potential. 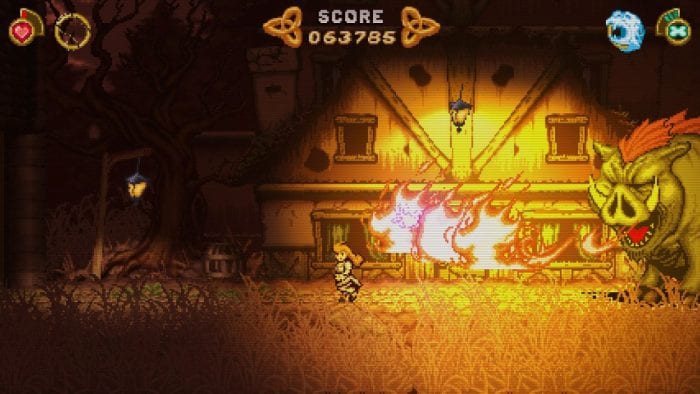 Seemingly, the shortcomings of Battle Princess Madelyn didn’t go unnoticed by Casual Bit Games themselves, who have since released a ‘directors cut’ edition of the game. Battle Princess Madelyn: Royal Edition released in late 2019. This physical-only variant of the game was published through Limited Run Games and contained an improved, refined version of the Arcade mode which included new enemies, bosses and music, and a complete overhaul of the level design in each stage.

(In a candid blog post on Limited Run Games’ website, Chris Obritsch explained his reasoning for reworking the game.)

Sadly, this version of the game can now only be found on the second-hand market. A digital version for Nintendo Switch is planned for release sometime in 2020, but there is no specific release date as of yet.

Until then, I can wholeheartedly recommend Battle Princess Madelyn to any fans of the Ghouls ‘n Ghosts series—or to anyone looking for an authentic ’90s arcade experience. It may have its flaws but it’s an authentic homage to a classic era of gaming. It retains all of the fun-factor but thanks to its improved controls and a more forgiving lives system, it has a lot less of the frustration. On top of that, it also has gorgeous pixel-art, great music and memorable boss fights.

Above all else though, it’s a game that tells little girls that they can be knights too.