The word “Anthropocene” as an adjective and noun refers to denoting the current geological age in which humankind has been the main factor on the current state of the environment. By using the word, as a title of an album, you would expect that the resulting work would have something to say about the current state of the world we live in. This only really appears to be half right when describing Grimes’ latest album, which much like Grimes (aka Claire Boucher) herself, seems to be a series of contradictions.

Grimes started off as a fiercely independent female artist, seemingly obsessed with sci-fi and Frank Herbert’s Dune in particular, and creating these heady soundscapes that you could lose yourself in through early albums Geidi Primes and Halfaxa. In 2012 came Visions and lots of critical acclaim. Visions was an album which took inspiration from early ’90s dance and reinvented it whilst the rest of the world was looking back to the ’80s and creating synth wave. Grimes’ follow-up Art Angels in 2015 was a masterpiece, an album that showed off great songwriting, production and a new-found equilibrium between pop and experimentation. Tracks like “Realiti,” “California” and “Kill V. Maim” were absolute classics.

It has been five years since Art Angels, and in that time, Grimes has become something of a contradiction to all of the early work that showed so much indie promise. There has been the feminist stuff, which is admirable of course, but then this seems to be contradicted by certain appearances in Vogue and statements and attempts at pop mainstream stardom. There are the accusations of “selling out” thanks to Boucher’s relationship with Elon Musk, getting a song rejected by Rhianna, and then there was the public spat with Poppy. Miss Anthropocene arrives now with all of this added weight, not to mention many delays, and sadly fails to rise above this and equal the heights of the two previous albums. 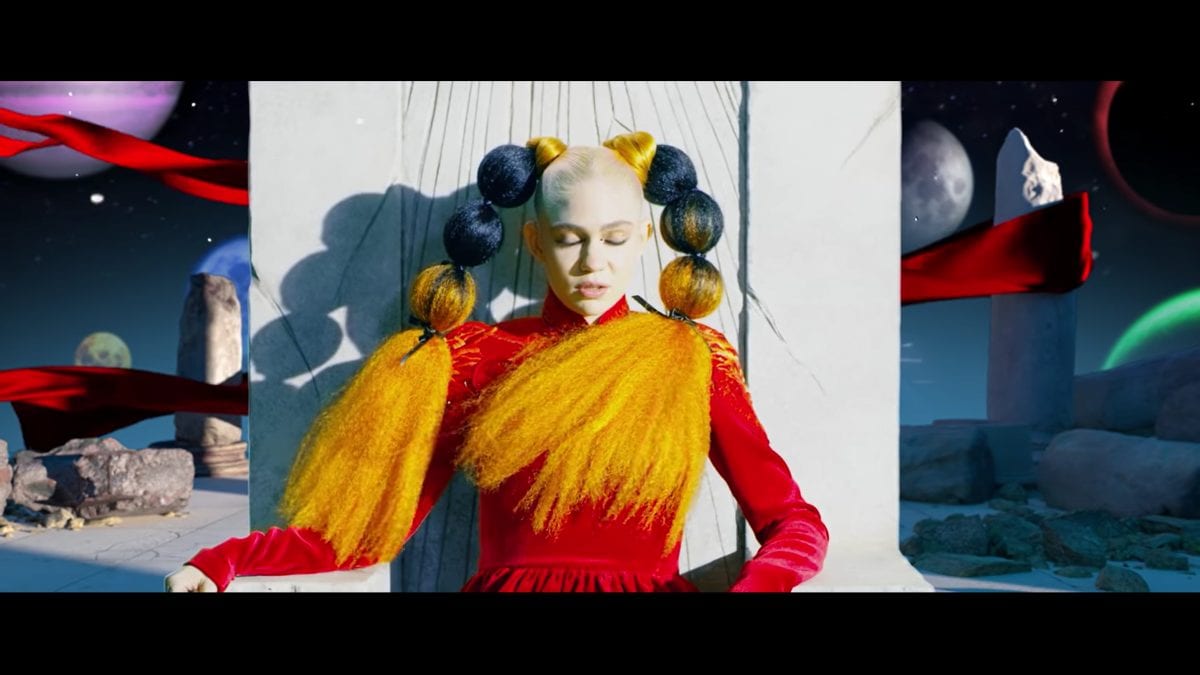 “So Heavy I Fell Through the Earth” starts things off, and it’s a somewhat puzzling choice. It’s neither the absolute banger that gets the energy pumping with Grimes’ reintroduction to us five years on, nor is it completely a waste of time. It’s just a slowed-down, ethereal orbit around with which to break us into the album, with sparse lyrics aside from the title and chants and moans to the beat. “Darkseid” picks things up slightly with a pacier, lyric-heavy track with a menacing background. Lyrics are sung in rapid-fire Japanese or French as Grimes tells us “I’m restless in the soul, we don’t move our bodies anymore.”

“Delete Forever” is the recent single from the album with its acoustic guitar and claims of being tired of demons. “Always down, I’m not up, I guess it’s just my rotten luck” Grimes sings in perhaps her most commercial track ever. The steady beat kicks in eventually and in all honesty, this track absolutely works if you enjoy it as a kind of late ’90s singer/songwriter throw-back, and is somehow empowering even for a jaded middle-aged male like me.

Previous single “Violence” is business as usual with Grimes’ vocals back on more familiar territory with its catchy refrain of “Yeah I like it like that, yeah I like it like that” and club-friendly beats. On a deeper level it has something to say about abuse with “you wanna pay me back,” and in between Grimes sounding like she is almost pleading with a lover.

“4AEM” is another single from a while back, and is more familiar stuff that sounds like it could have been on previous album Visions. It becomes a hardcore rant about possessive jealousy or maybe someone being overprotective. “New Gods” starts slowly with unsure vocals making their presence known in a song that seems to be about the current state of the world, and what it means to be a man. It honestly sounds almost like an audition for a new Bond theme song, and as you close your eyes and visualise something to go with it, you can’t help but see the kind of trippy visuals and falling female shapes that accompany the opening credits of a James Bond adventure.

“My Name is Dark” (also once a single) gets the energy back up with growling guitar and beats soundtracking some kind of predator wandering city streets. “That’s what the drugs are for” we are told whenever the menace lets up. It’s catchy as hell, truly atmospheric stuff, and an album high point.

“You’ll miss me when I’m not around” comes next and is more playful but with clearer lyrics. “If you don’t play then you don’t die; if you like it then you’ll make it out alive” we are told, and the track seems to be about suicide, and told from the perspective of someone who has just died and is full of regret. Much like “Delete Forever” this showcases some superior song writing ability, and brings both smiles and tears in equal measure. 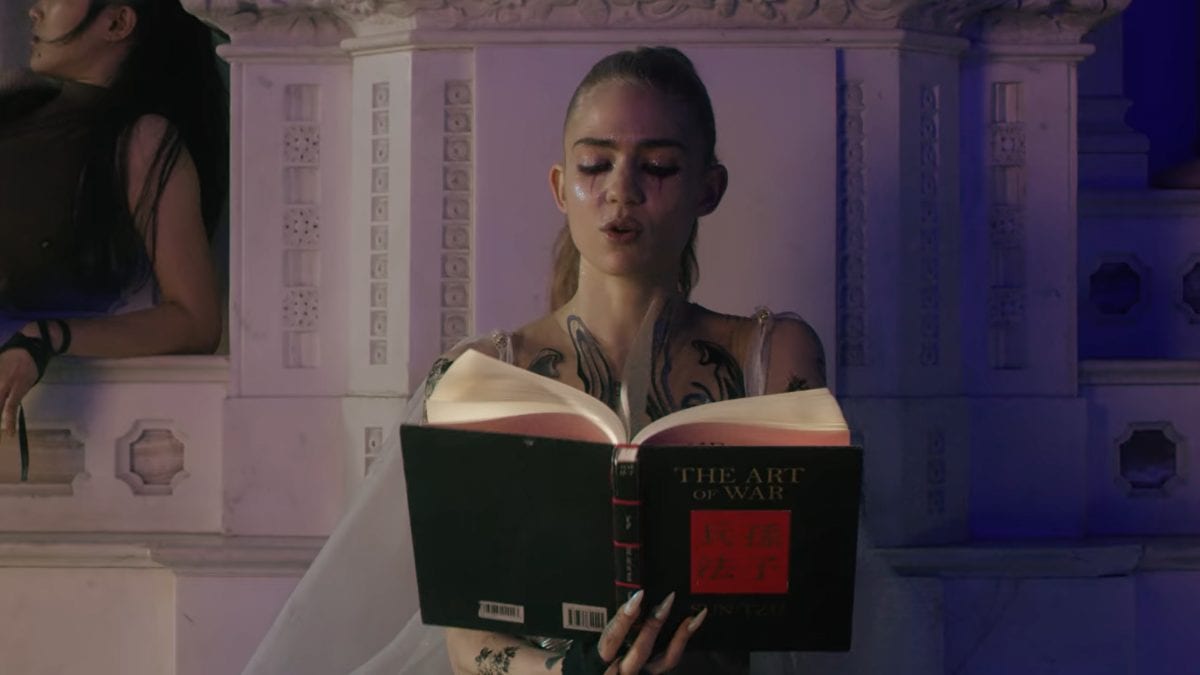 “Before the Fever” is a slow trawl through the sludge of the modern world, wondering if we are at the end and wondering if “there’s only one way out.” It then opens up into some kind of electronic, industrial bliss about living through the end times. “IDORU” is the penultimate track and goes on for a full seven minutes. It starts with muted singing and a single note before drum and bass comes along, and Grimes sings about the nature of her existence, or perhaps laments her level of fame and the expectation that comes with it. “I want to play a beautiful game,” this persona sings to us, and tells us even as her fingers tremble “this is who I am.” It’s perhaps an over-produced and less raw track from a lot of what is on Miss Anthropocene, but isn’t entirely a bore if it were three minutes shorter.

We end on “We Appreciate Power” which was of course a single, seemingly from years ago at this point. Apparently based on a North Korean all-female military band, it’s an ear worm that if it hasn’t already made its way into your brain, certainly will by reappearing here.

If Miss Anthropocene had been released in 2012 or so as Grimes’ breakthrough, then I think I would feel differently about it. The fact that six of the 11 tracks on the album have already been released over the last year or so, really hurts my impression of this album. After a break of five years, you would truly expect something to move and shake music in a bold new direction considering Grimes’ talent. It’s possible that Art Angels was truly a peak that an artist never recovers from. It happens to everyone—difficult second album syndrome etc.—but maybe this was a case of the emperor’s new clothes all along.

Miss Anthropocene taken on its own merits isn’t a bad album at all. It’s a good album to put on as background music, and has some real moments of beauty and inspiration. It just feels like whatever message about the world was intended, got lost in the confusion, and it’s stuck between art and commerce, not making peace with either. After four listens, I found it difficult to get lost in the way I did so easily with Art Angels or Visions, and in that sense it is something of a disappointment.

More From: Electro/Drum and Bass