Some TV shows and films have this subtle way of getting under your skin, make you want to be there in the moment, experience what the characters are experiencing. Sometimes it’s a warm feeling, other times it’s a bit more dangerous. Often it is hedonistic. Take Mad Men, for example. Whenever I see Don Draper light up a cigarette, it makes me crave the thing I gave up almost ten years ago. And as he knocks back that tumbler I would kill for a glass of Scotch, even though I hate the stuff. The Sopranos had the same effect but with food. Every now and then I’ll do a rewatch, but I must cook Italian food and drink wine to make the experience utterly gluttonous.

This is how Big Night came into my life. It’s a bittersweet film for me as it was introduced to me by my former boss, mentor and dear friend who sadly lost his battle with depression and ended his life a few years ago. He was certainly not the first of my friends to commit suicide, and sadly he probably won’t be the last but this one hurt so bad. I cannot even think about him without welling up. He was one of the few good souls, one of the only men in my life ever who have treated me just as a friend; no sexual interest whatsoever, no flirting, no expectations. It was the most real relationship I have ever had, and we never used each other for anything other than friendship. He made me feel great about myself, encouraged me to write, encouraged me to leave the job despite him being my boss and not wanting me to go. But because he truly believed in something better for me he did it anyway. I miss him so much and I wish I had been able to make him feel the way he made me feel about myself.

Much of my time with him was spent laughing until tears would run down my cheeks and I couldn’t breathe. We’d bitch about humanity together, get through the traumatic and soul-destroying experiences in our jobs (we dealt with a lot of death, drug addiction, poverty, abuse) by cracking very dark jokes and getting animated about TV, Film and Music—it was the only way we survived back then. It was while we were talking about the importance of food and drink in film that he brought up Big Night. I had admittedly never heard of it, but he was adamant that I had to check it out. Then at Christmas 2013, lo and behold my Secret Santa had gifted it to me.

The experience of eating a delicious meal is one of life’s most hedonistic pleasures—often better than sex, depending on what or who you’re eating. Now Big Night isn’t a sexy film at all. Nothing significant happens; you are not on the edge of your seat throughout. Yet, it sits there right in the centre of my heart with subtle power. 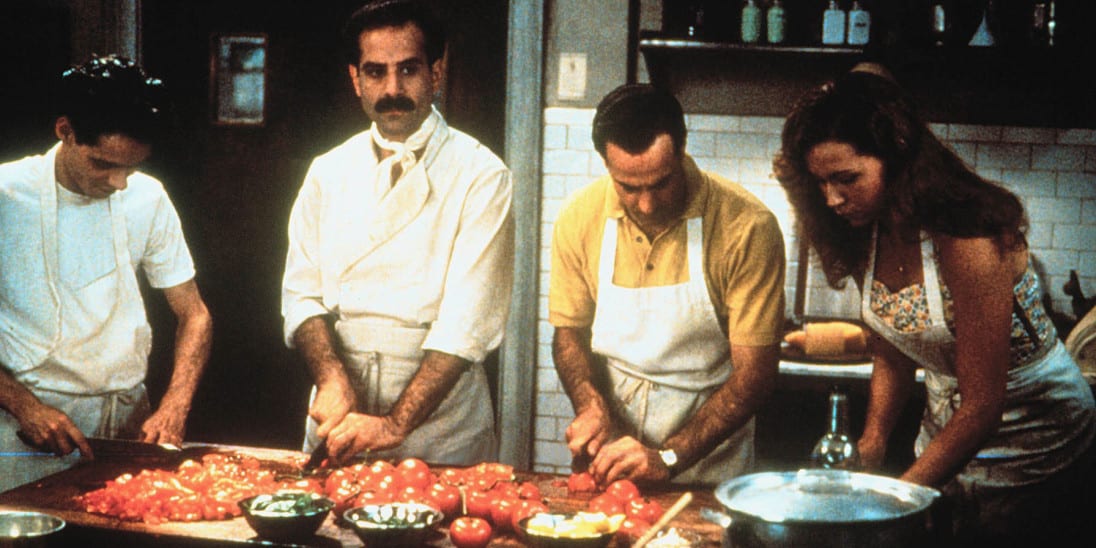 Set sometime in the 1950s and in Keyport, a seaside resort along the New Jersey shoreline, the story follows two motherland Italian brothers, Primo and Secondo Pileggi, and the authentic Italian restaurant that they’re trying to save from financial ruin, Paradise. Primo, the master chef and artist, is played by the brilliant Tony Shalhoub, and Secondo, maitre d’ of the restaurant and younger and more materially ambitious brother, is played by Stanley Tucci. Supporting cast members include a young and silent Marc Anthony (who quietly floats in and out of many scenes as the restaurant’s sole waiter), Sir Ian Holm, Isabella Rossellini, Campbell Scott, Allison Janney, Minnie Driver, and Liev Schrieber. What a cast! Not only that, this was Stanley Tucci’s directorial debut (he directed alongside Campbell Scott), and Tucci wrote the script with his cousin, Joseph Tropiano.

Paradise is facing imminent closure. A rival business across the street, Pascal’s Italian Grotto, draws the crowds night after night. Paradise just can’t compete as the perfectly cooked dishes take too long to get to the tables. There are no free sides of pasta or tacky entertainment. The Grotto, on the other hand, serves an abundance of not great but familiar, cheap American-Italian dishes, and the atmosphere is lively and fun.

Secondo is keen to make some changes to increase the restaurant’s popularity, but Primo is very much like the Soup Nazi from Seinfeld and is having none of it. He is an uncompromising purist, for him, “to eat good food is to be close to God”. I can’t disagree there, but unfortunately, nobody is eating their exquisite food or getting closer to God and time is running out. Secondo is good friends with the deliciously over-the-top, hot-tempered Italian Pascal (Ian Holm really gets to chew the scenery in this role), and often stops by the Grotto to have a drink with him after closing. 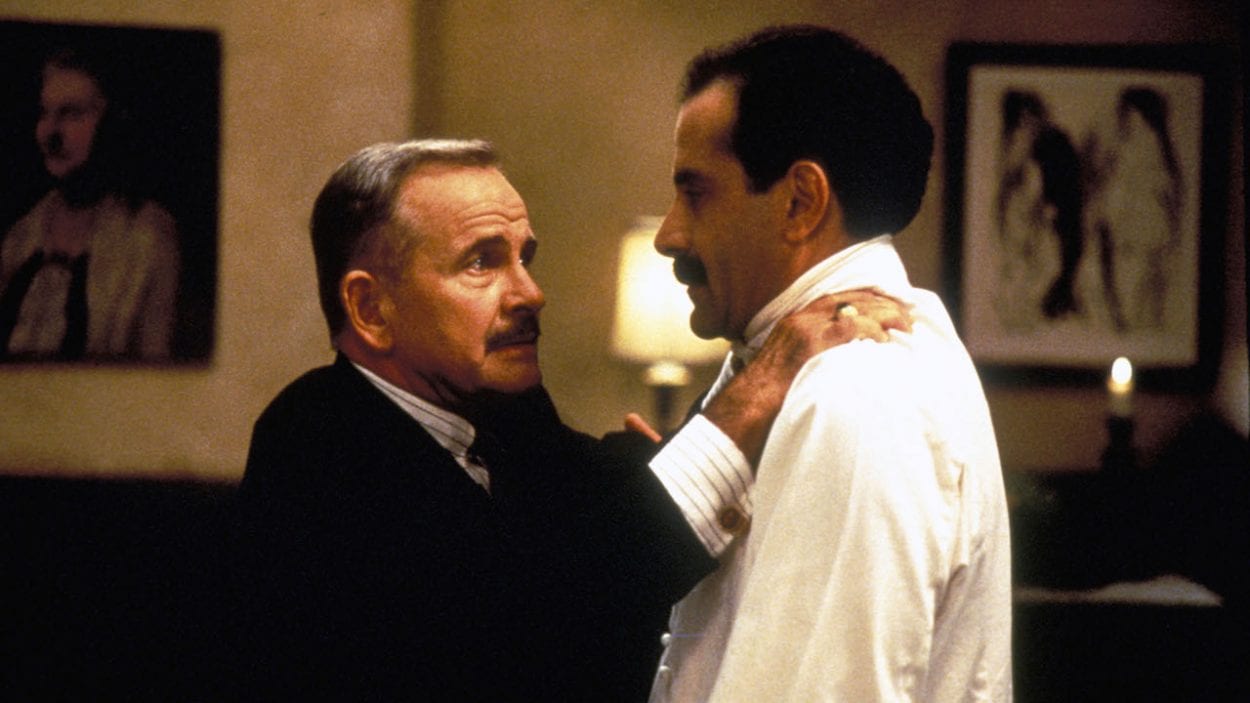 Secondo reaches out to Pascal for a loan to keep the restaurant afloat, but Pascal refuses. Instead, he offers the brothers jobs at his restaurant, which Secondo refuses. Pascal, who respects both brothers, offers his help in another way. He assures the brothers that when famous jazz singer Louis Prima comes to town next week, he will invite him and his band to dine at Paradise. Pascal will do this favour, it seems, out of the goodness of his heart. However, Pascal is not aware that Secondo is carrying on a secret affair with his mistress, Gabriella (Isabella Rossellini).

Secondo doesn’t really know what he wants. He has a girlfriend, Phyllis (Minnie Driver) who is kind and devoted. She, of course, has no clue that Secondo is having an affair, and so cannot understand why he won’t commit to her and his reluctance to declare his love.

Phyllis: You know how they get you, these people… men… boys… They make you think they have secrets they will tell. But they have nothing to tell. And then they talk, and they talk talk talk and keep talking. And what do they say? 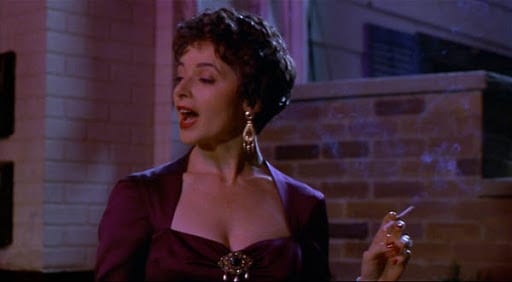 The film makes you want to live in the neighbourhood, with its little business, people getting by–just–and all helping each other out. We meet the baker, the priest and a woman called Ann who sells flowers (Allison Janney) whom Primo longs to be with but is too shy to tell her. We even meet the local Cadillac salesman (Campbell Scott), who represents the elusive goal of success, which is not simply to drive a Cadillac but to drive next year’s model this year. One of the most wonderful aspects of Big Night is that while it certainly exposes American excess, entitlement, and cultural ignorance, it does so in a gentle and honest manner. It never throws it down your throat.

The centrepiece of Big Night is, obviously, the big night, which they spend every last penny of their savings on preparing for. If this meal doesn’t go right, this one expensive evening could turn out the be their Last Supper. Primo pours his heart into every dish, lavishing his vast expertise in the cooking—which makes you pause the movie and go and cook some pasta even if you’re not really hungry at all and you know your effort is revolting in comparison, you just want to imagine the taste as you swallow. The magnificent feast centred around a timpano, a complicated baked pasta dish, that if pulled off could really wow their guests and save the business. 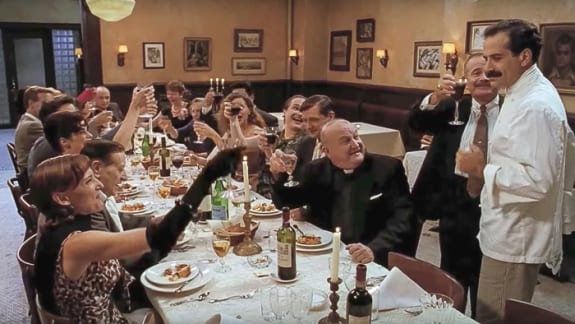 Once the party gets started, there is singing, dancing, drinking, and, of course, eating—lots and lots of eating, which makes your mouth water. It’s an evening to remember for everyone as secrets are uncovered. Phyllis catches Secondo and Gabriella in a passionate embrace and Gabriella forces Pascal into admitting that Louis Prima was never even invited to the party. He just wanted the brothers either in his employment or out of the way back in Italy. But through all this, Primo finds himself, Secondo wonders what he really wants from life, and the two brothers rediscover something they’ve always known: that food, like love, is an unspoken, universal means of communication.

This realisation is cemented the next morning, when, in an unbroken five-minute take, Secondo prepares an omelette that he and his brother wordlessly share. From the ease of Tucci’s way with a frying pan to the conciliatory act of serving his hesitant brother a plate, to how they sit next to each other, eventually reaching an arm over the other’s shoulder so that you can almost see what they were like as little boys…you cannot take your eyes off the scene. Then, like Cristiano, the waiter, who walks out of the kitchen once the brothers are settled and eating together, you feel that you should leave too. The camera does that for you. 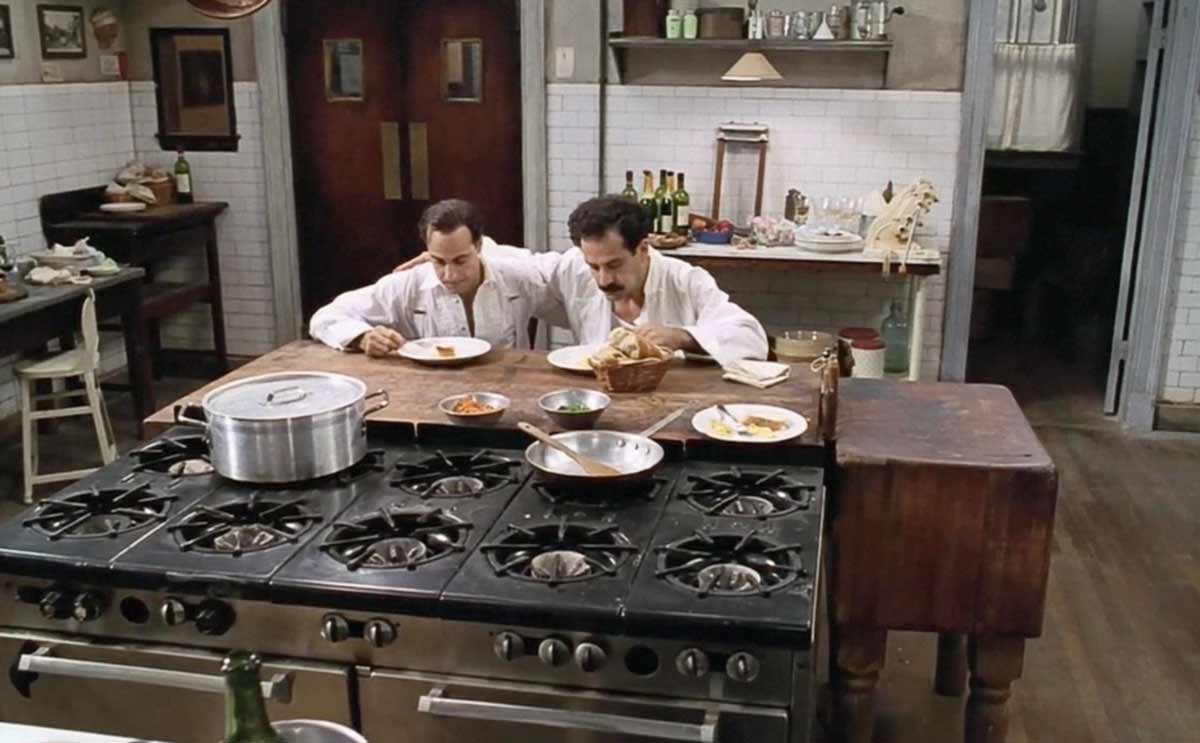 Above all, I love this movie because it is platitude, lesson, and resolution-free. It does not end with a cute bow wrapped around it or pretend to teach you anything. No wrong is righted. No one is saved. It is an authentic slice of life, a life very different from my own, but universally human.