ER already had leanings into prestige television territory but “Love’s Labor Lost” took it even closer. It forewent the standard ensemble TV episode formula by focusing mostly on Dr. Mark Green (Anthony Edwards) as he lost everything. His no good very bad day is the kind of fare on HBO since 1999, not part of mid-‘90s NBC Thursdays, yet here it was. This tour de force of ambition and talent helped open the door for characters like Tony Soprano to go through their complicated evolutions. High praise for a popular doctor show, yet I’m not exaggerating. Between its quality and the ground it broke, TV Guide got it right placing this episode at #6 all-time in their 2009 list of best television episodes ever.

I’m not going to regurgitate trivia here (there’s an excellent oral history of this episode for that), or lament why Anthony Edwards was outright snubbed for awards nominations, however true the complaint. Here, I will break down the episode’s structure and look into why it’s so effective—both as a single episode and also as a response to the previous episode’s developments.

“I’m not playing catch with you anymore.”

The opening scene is the extent of Dr. Doug Ross (George Clooney) in this episode. Why is this appropriate? Doug and Mark are great friends. Mark has his buddy with him at the beginning, and they’re blowing off steam as if there wasn’t life or death constantly inside the building.

Their interaction also behaves as if Mark’s wife Jen didn’t try to divorce him last episode—which she absolutely did. If you were a new viewer, you wouldn’t think there’s anything amiss in Green’s personal life. And that is absolutely by design of the episode’s writer Lance Gentile.

Based on what we’ll learn later, Green told no one about Jen serving him divorce papers. He must have wanted a day where everything was the way he’d expect it, and he can play to his strengths as a proficient physician. He can bury the bad news.

Then a car speeds around the corner to literally drop a gunshot victim out onto the ground between Doug and Mark, almost running over Doug in the process.

The last thing Doug wryly says to Mark is “I’m not playing catch with you anymore.” Then he’s pretty much gone, leaving the later pep talk about “what you did was heroic” to Dr. John Carter (Noah Wyle), who is too new to the staff to have much weight to those words.

Last episode ended with Dr. Peter Benton (Eriq La Salle)—being sleep deprived—unable to wake to help his elderly mom, so she fell and broke her hip. How she makes it through her broken hip surgery was the cliffhanger. Will she die because Peter worked too many hours in a row, only to fail his own family at the end? This episode has Peter doing nothing but beat himself up and trying to get into the surgery team to make amends while his mother goes through her surgery.

Viewers were being set up to think Benton’s mom was the “Lost” part of the title of the episode. Peter gets what’s coming to him for his hubris, but at what cost? That’s what happened, right? Nope. He and his sister are left in a waiting room at the episode’s halfway-mark commercial break while their mom is taken to a post-surgery recovery room.

The complications we expected from Peter’s storyline never came. The plot that satisfied last episode’s cliffhanger also became this episode’s misdirection while we fell hard for the love between Mr. & Mrs. O’Brien. 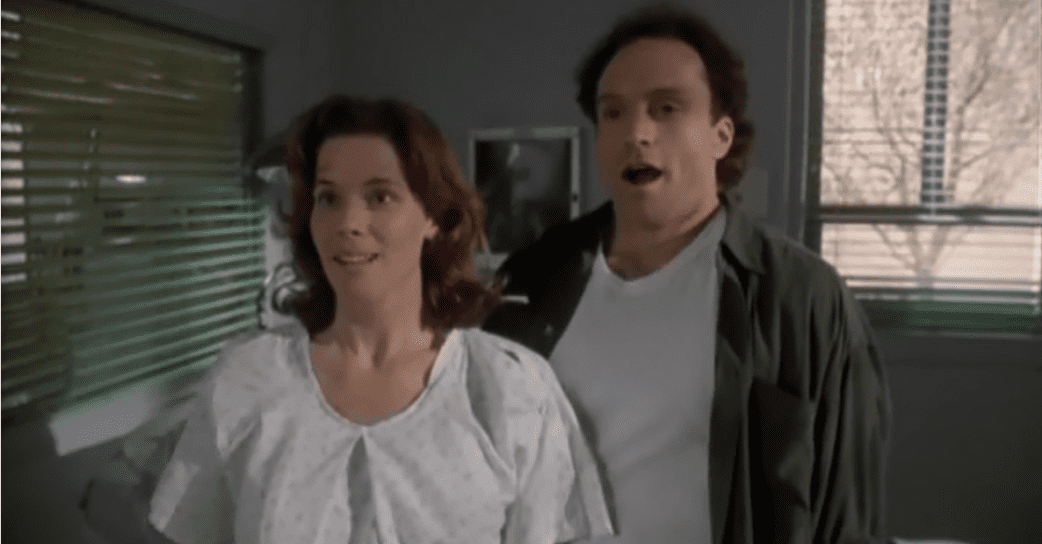 Sean (Bradley Whitford) and Jodi (Colleen Flynn) O’Brien are a feisty young couple who are set to be the comic relief to balance out the Benton family drama.

Thanks to The West Wing, we know Whitford is grade-A acting talent. Flynn may be more unknown to us, but she had enough acting chops to be on China Beach. She and Whitford have the chops to sell their shared comfort level. Jodi and Sean seem real, and joyous, and they happily put their faith in the hospital staff when they’re making sure everything’s going well with Jodi’s pregnancy. Which sounds reasonable because—as the first post-credits scene between Carter and Green said—Mark is this close to getting a promotion because of the amazing job he does every day in the ER. They’re in great hands. Green is displaying proficiency, confidence, and great bedside manner the entire time.

It’s tough to notice the small mistakes Mark makes, because based on what he notices it makes sense why he could diagnose a bladder infection instead of preeclampsia.

Jodi gets wheeled back into the ER then, but the tone is still mostly funny around them. We get little vignettes such as Carter’s cognancy test when an elderly patient takes his dentures out of his mouth when Carter asks him to “show me your teeth.” The show is telling us to keep it light. Nothing to worry about here.

At least it was until the halfway mark. The same time Benton stops appearing, so leaves the levity.

There’s an interesting polarity between Benton and Green in this episode:

Benton’s hubris got him into his mess, but then everyone is keeping him away from his mother’s surgery. He is unable to participate in helping fix his mom.

Peter and Mark had the same exact instincts. One was rightly stopped. The other was allowed to continue, and that’s who got into trouble.

Why did this episode specifically choose to make the polarity between Benton and Green in the story structure? Because of last episode’s other game-changer: Mark’s wife announcing she’s filing for divorce. That’s the last time we see Green before this episode’s game of catch in the parking lot, and it feels like the writers forgot about this detail entirely here. But they didn’t. They used that state of mind to set up Mark’s fall.

If Mark had just gone home when Lewis arrived, it would’ve ended differently. But he wanted to see his patients through.

If Mark had stepped back and forced the OB department to understand his situation, it would’ve ended differently. The fact that he missed the blood clot on the ultrasound isn’t exactly his fault—he’s not an OB. The OBs were stuck on a completely different floor. His big mistake came from wanting to see these patients through, and not noticing he was in over his head until it became painfully obvious. 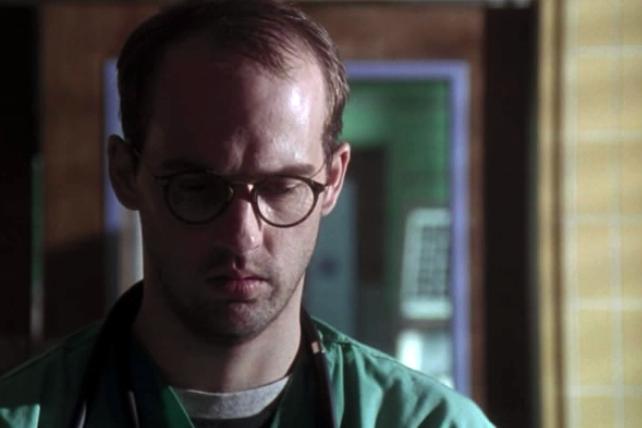 His first mistake was acting like there was nothing wrong with his personal life. If he had just talked to Doug or Susan about Jen leaving him, he may not have had as strong a need to make sure at least someone’s family was in good shape. Instead, he bottled it up and we don’t even get a mention of it until a concerned Susan asks if Jen is in town.

The final line of the episode finally addresses the elephant in the room. It’s the first time in the entire episode Jen was even mentioned. The distance Mark put between himself and that reality finally closed in as one last gut punch.

If Jen was here, it might have all ended differently. It would’ve given Susan comfort knowing that someone was on the other end of the train ride to take care of Mark. And it would’ve given Mark comfort as well, and I still think it would’ve kept him from feeling the need to be Superman for the O’Briens in the first place.

But Susan’s question doesn’t even get an answer; it’s just there for us to remember last week’s episode after the ordeal we just went through, and to kick Mark one last time in the ribs. Now that Mark is confronted with a chance to honestly answer that question with his other closest friend, he walks away from Lewis into the train car.

Co-executive producer Mimi Leder did an amazing job directing this episode—the camera making a constant figure eight through two simultaneous surgeries is amazing choreography—but the use of the train as a bookend is her best choice.

The first thing we see is a crane shot of the El zooming toward us and off to the right before the camera points down and shows us Mark and Doug tossing the football in the street.

The last thing we see is Mark inside the same train, breaking down as outside the window we see Chicago buildings zooming past.

At the beginning, the train zooms past like there was nothing wrong that can’t just pass by, and the train’s gone just like that. In the end, it’s an internal shot of the train, a complete inversion of the beginning.

This time, the world goes by so quickly and Mark can’t even see the outside of the train. We’re literally going with Mark as he withdraws from external to internal. It’s an excellent metaphor I can’t get enough of.

It’s also related to when Mark went to deliver the news of Jodi’s death to Sean. Mark was so distant in the operating room that he was giving chest compressions to Jodi minutes after everyone else knew the answer. Once he figured it out, he stepped out, went down the elevator, and through door after door of a particularly haunting long hallway shot. Then he stepped into the nursery where Sean was with his baby. But do we get to hear anything? Nope. There’s a level of distance. We are not able to hear Mark tell anyone that they lost their wife and there’s nothing they can do about it. There’s an embargo on those words this episode because Mark can’t deal with them. And that’s also why we never get an answer to Susan’s question.

On paper, I can see how ”Love’s Labor Lost” follows storytelling rules fairly well. There’s the three-beat with trying to guess where the title’s tragedy is going to come from (it’ll be Benton’s mom, it’ll be the baby, oh no it’s the mother). The parallels between Benton and Green are polar opposites by design. The story has all the elements of standard TV but it doesn’t feel like it because it doesn’t resolve into a question with a simple answer. The last episode’s cliffhanger was, is Peter’s mom going to be okay from her physical fall? This episode’s cliffhanger is basically the same in sentence structure, but that’s about it: is Mark going to be okay from his existential fall? There’s no hospital he can go to for surgery that’ll put him back together. This is much more complicated. This is an ending perfect for prestige TV. It’s an ending that’ll stick with you for 25 years.