Lady Snowblood, from Director Toshiya Fujita and based on the manga by Kazuo Koikeis, is a rare gem that was decades ahead of its time in many different ways. Great films that encapsulate the zeitgeist of the era they were released in are one thing but when one manages to be so forward-thinking that it predicts cinema trends some 30 years or so in the future, well that’s something that few have ever been able to achieve. Lady Snowblood could even be said to be a starting point of a path through action cinema that leads right up to the current year.

Asian cinema has always been ahead of the curve in a number of ways, pushing boundaries in action, animation, and horror, amongst others. I just recently wrote an article about how anime Ghost in the Shell shaped modern sci-fi films and Lady Snowblood most certainly does the same for the action genre. The first and most obvious thing of note is the female lead. She has no assistance in her mission and she’s not one of a few main characters that also includes male actors.

If you were to search for genuinely good action films with female leads before the millennium, you’d probably be shocked at how few you’d find. Really, aside from everyone’s go-to, Alien, there’s only La Femme Nikita; the others are more B-movie affairs. Lady Snowblood predates these by a number of years and does it best. The role was written for Meiko Kaji and she puts in a great performance, as well as having the perfect look for the character of Yuki Kusame, “a child of the netherworld.”

Yuki is dubbed as such because she was conceived for the sole purpose of revenge. Her family were victims of one of the most brutal and heinous acts in the history of fiction by a group of four con artists. Though her family were innocent, her father was killed by being stabbed to death multiple times, her younger brother slaughtered in a similar fashion and her mother was kidnapped. She was held captive and sexually assaulted for days by her three male captors as the fourth female one looked on and laughed.

Her mother was then taken further afield by one of the men who planned to keep her as a long-term sex slave until she returned the fate they bestowed on her late husband and righteously stabbed him to death during intercourse. Unfortunately, this meant she was imprisoned until her death, caused by complications of giving birth to Yuki in jail. She purposely became impregnated whilst in there, so her child could get the revenge she could no longer obtain. Who the baby’s father is, she never knew. Yuki was raised by one of the friends her mother made in prison and her husband, who was a military man, the equivalent of a knight.

He trained her vigorously and mercilessly throughout her childhood for her mission of vengeance. A simple, yet powerful origin story which constitutes the first act of the film. Yuki’s title stems from her being born during a snowstorm and is personified by what may be her first kill, that of a crime boss and his guards on a snow-covered street in the opening scene; it’s a beautiful set-piece, full of imagery. It could be because I was born whilst it was snowing as well but I’ve always thought that it’s by far the most atmospheric type of weather and if it was up to me, it’d be snowing all the time. The metaphor of blood on snow will also be referenced throughout the film as the act of her purifying by revenge.

Yuki’s pale, steely face and white kimonos reflect her apt title as well. Her elegant attire and umbrella also accentuate her graceful deadliness. Kaji fully embodies the role of Lady Snowblood. Another way the film was so avant-garde was in its action style. The choreography of the fight scenes is decent enough for this early period but it’s the presentation of it that’s most impressive. To put things in perspective, Bruce Lee had only just made his cinematic debut two years prior to this and was just starting to modernise and change the course of martial arts films. Yuki’s weapon of choice is a katana, a smaller version of a samurai sword, that is concealed in her umbrella. This was a common trick used by ninjas and makes her even more lethal.

Limbs are severed instantly and cleanly, with blood shooting out from wounds. These jet streams verge on being comical but, as gratuitous as they are, you can’t deny they and the stains they produce on clothes are both as aesthetically pleasing as they are satisfying; especially in the context of this kind of story. The cinematography is very contemporary as well, using techniques to accentuate emotion. One of particular note is the recurring image of the four con artists standing over the camera that flashes up at moments of anger. Another is the quick zooms onto Yuki’s face when she first sees her targets. These are things that are commonplace now but were innovative at the time.

Films from the ‘70s also benefit from a specific sheen that makes them distinguishable from other decades. Prior to this period, technology (amongst other things) wasn’t developed enough and so productions had more of a crude, ad hoc quality to them. Likewise, after the ‘70s, movies started to lose that silver screen look as the first attempts at CGI crept in. Lady Snowblood is one such film that benefits from this golden age. 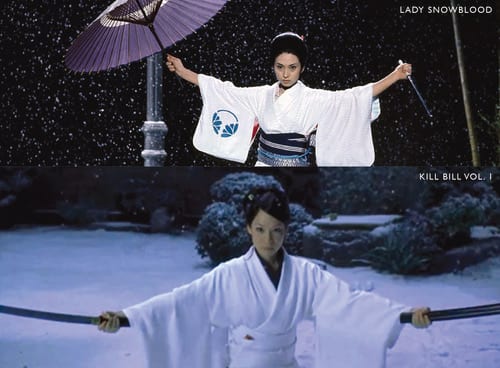 The non-linear structure of the film is very modern and separated into chapters to make the narrative succinct. There are parts that even use hand-drawn illustrations effectively to show flashbacks. The score is also quite contemporary for the setting and this juxtaposition is frequently used by films in the current scene. Kaji performs “The Flower of Carnage,” the main theme song, it’s exquisite and her soaring vocals on it are perfect. Usually, when an actor performs a song for the soundtrack it tends to come off as self-indulgent but here it’s very fitting.

The turn of the century saw an influx of female-led action movies, one of which was Quentin Tarantino’s Kill Bill Vol.1, which is practically a loose, modern remake of Lady Snowblood—the similarities are too numerous to list. Tarantino’s a big, self-proclaimed fan and it’s clear that his love for the film meant that he couldn’t resist paying a lot of homage to it. He included Kaji’s theme song on its soundtrack and used it in the climactic scene of the film where the Bride defeats O-Ren Ishii, a character clearly modeled after Lady Snowblood; their final showdown takes place in a snow-covered garden as well.

The House of Blue Leaves, the location for the main scene of Kill Bill bears a resemblance to the house in the climactic scene of Lady Snowblood, with its balconies and the imagery of bodies being cut down and falling from them to the lower floor. The whole premise of the film is in principle, the same. The catalyst for both is a woman who has her partner and child brutally taken from her and she has to suffer multiple sexual assaults. Tarantino even reflects the recurring shot of the four con artists looking down on Yuki’s mother after their heinous act with his shot of the four members of the Deadly Viper Assassination Squad looking down on The Bride after theirs.

He also took the same sound effect when Yuki does her flip through the air and applied it to The Bride, along with all the gratuitous blood effects. Similarly, Tarantino tells his story in a non-linear fashion with chapters that have titles and a sequence with hand-drawn illustrations in the form of anime. Finally, a daughter of one of Yuki‘s targets comes back for revenge at the very end of the film, a situation that Tarantino set up in his film and has hinted at as being the basis for a possible sequel in the future. There are more parallels and matching shots but these are the main examples and I’m sure you get the point.

Just to be clear, I don’t mean any of this as a criticism but quite the opposite. I believe there’s nothing wrong with taking something and putting a new, modern spin on it as long as it’s not just a straight remake. This is something that Tarantino draws criticism about often but not only is there merit to paying tribute to a classic but it can strengthen a project if you make those elements your own. Remixes and covers can be as good, if not better than the original songs, if handled the right way and it’s a delicate balance. Tarantino knows how to do this best and he’s one of the few that do, which is what makes him such a brilliant director.

Lady Snowblood’s influence is by no means limited to just Tarantino’s masterpiece though. It can be seen in the imagery of another great film from the same period, Lady Vengeance, from the brilliant Chan-Wook Park. Its protagonist, obviously seeking revenge for a heinous act that was inflicted upon her involving the murder of a child, also has a particularly pale complexion, offset with red eye shadow. Snow is even used in key scenes throughout the film, a subtle but clear homage.

The legacy of Fujita’s film can be seen everywhere in the current landscape of cinema as well. DC and Marvel have only just released their first female-led movies in recent years, with their second ones dropping later this year. Studios and Producers are finally starting to realise that female actors are just as qualified to helm blockbusters in the biggest franchises. Credit is due to Fujita for not just doing what some are only just having the sense to do now, more than 40 years later but doing it with such style as well. 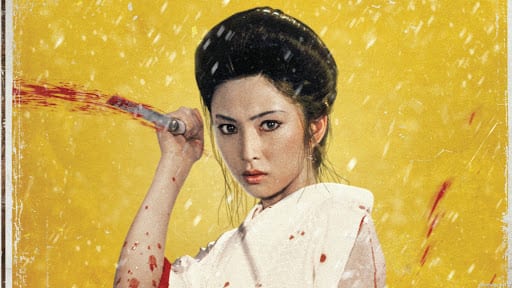