Let’s see what the crew is playing this week!

Unbelievably, I’m still toiling away on Goblin Sword. I’ve accessed all the areas, and beaten most of the bosses, but I’m still on the hunt for all the weapons, armors, treasure and amulets I’ve missed. Yes, this is a game also available on iOS, but the Switch version has standard video game controls that are smooth and intuitive. It seems odd to spend this much time talking about a short game like this, but I believe supporting companies like Gelato Games that make quality discount games like this will only help them grow, expand, and continue to make bigger and better games in the future.

Meanwhile, I downloaded the free PS Plus games for the month of March, and so far I am loving playing Shadow of the Colossus for the first time. I never played it back in its PS2 days, so I’m only finding out now how influential this game was.

Exploring the vast, mostly desolate land will give any Breath of the Wild fan a flash of recognition. The way your sword acts like a divining rod will remind you of Skyward Sword, but without the frustrating controls. And of course, the Colossi themselves, which Castlevania: Lord of Shadows straight up stole after they were done stripping the God of War series for parts. 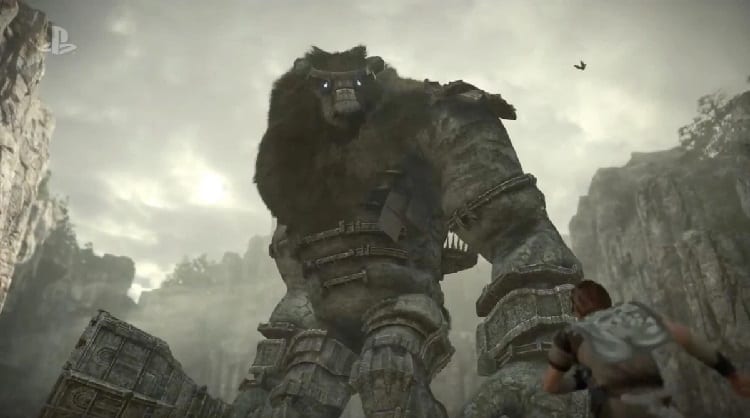 So far I have defeated three Colossi and based on the menu screen, I have many more to go. I was under the impression that the game involved aimless wandering, but so far the game does point you in the right direction initially, before letting you do some exploring of your own.

Lastly, I played Sonic Forces, and try as I might, I can’t get into Sonic games. The new ones, the old ones, doesn’t matter, I’m just not a Sonic guy. I’ve said this before in another article, but Sonic games to me are clumsy. They have no enjoyable flow to them. You are encouraged to go faster, faster, faster! Yet, you are almost always punished for doing so.

Sonic Forces does have an interesting character creation aspect to it, where you’re a new recruit in Team Sonic, allowing you to customize your own character to an insane degree—but I’ve never cared much about making a character, so it does nothing for me, unfortunately. I have a strong feeling Sonic Forces is heading to DeleteLand where it’ll join Sonic Mania (another free PS Plus offering), which I hear is actually decent-to-good. I’ll never know. I just can’t get into them.

My friends and coworkers will be happy to know that I finally, finally beat Yakuza 0, so theoretically I should shut up about it. It’s a wild ride. If you’re looking for something uniquely compelling and packed with hilarious and heartfelt side content, with a great story to boot, you could do a lot worse. I’m now a fan of the series. But I’m going to wait a bit before diving into Yakuza Kiwami.

Anyways, as is my habit, I’ve picked up some shorter games since Yakuza 0 was so damn long. It’s what I do. I’ll play a whole bunch of stuff on the short side between the longer ones. Anyways, I picked up the Castlevania: Requiem duology on PS4 (as of the time of this writing, it’s on sale for ten bucks). With that bundle, you get both Rondo of Blood and Symphony of the Night, two games Johnny has covered before on this site. I’ll fully admit that I’m a bigger fan of the Metroidvania entries in the series, like the wonderful Aria of Sorrow. I’ve played Symphony of the Night before, as well, and yeah, it’s a great game of course. I picked this up primarily for Rondo, and so far it’s living up to its reputation. I tend to suck at the old school series entries. For instance, I played Castlevania III for the first time on my 3DS back when the Netflix show first dropped, and the only reason I can say I’ve beaten it is because of my horribly abusing save-states the 3DS virtual console offers players. It’s a hard, hard game. Rondo has sharper controls, although they aren’t quite as smooth as Super Castlevania IV. Still, I’ve enjoyed my few hours with the game so far. It’s definitely living up to its sterling reputation; the graphics hold up really well, and the soundtrack is just great. It makes up for the absolutely hilarious voice acting.

I recently finished the great third season of the Netflix show, and that’s gotten me thinking: what in God’s name is Konami doing with this intelligence property? They all but drove it into the ground with the much maligned Lords of Shadow 2, a sequel to a reboot nobody asked for (for the record, I enjoyed the first game as its own thing, but it was not what I wanted from the series—plus, it was on the whole derivative in its gameplay, although the story had some neat twists). Thanks to the Netflix show, though, people love the series again. The recently released Castlevania Anniversary Collection was a solid way to capitalize on the goodwill generated by the show, but so far we’ve gotten nothing else from Konami. They’re missing a huge opportunity here. I know they’ll probably refuse to make a brand new game, so how about a second collection of the Metroidvania entries? Seriously, a collection containing Symphony of the Night as well as the Nintendo handheld entries would be just fantastic. Or how about another collection of the classic style games that contains entries such as Castlevania: the Adventure Rebirth? The remake of the much-maligned Castlevania: The Adventure is, to the best of my knowledge, only available to download from the Wii shop channel. Oh yeah, except that’s been shut down forever. So you can’t get it anywhere. Not right now.

The point of all this rambling is that people love this franchise again. The Netflix show is exactly what it needed (seriously, if you love dark fantasy, and/or the franchise, you need to watch it, it’s fantastic). It has reminded people of why they love the franchise in the first place. And Konami has done ABSOLUTELY NOTHING with it since the release of the Anniversary Collection. Why? Why in Belmont’s name have they not announced something else related to the games? Ugh. I think my doctor just woke up in their sleep, sensing my blood pressure spike just now.

Anyways, yeah, Rondo of Blood is a really good game.

Last week I mentioned that I’d found myself making excuses to avoid continuing my playthrough of The Last of Us. I’m happy to report back that I’ve since staved-off procrastination for long enough to finish it, making it the third PS3 classic I’ve finished this year. My opinion of it remains unchanged—I’m not a fan—but I do have to begrudgingly respect its commitment to bleakness. The bold finale was a stark reminder that I was playing as Joel, not as myself. I don’t want to spoil anything but it gave me a sense of unease that I’ve not experienced in a game before.

Continuing my journey of discovery through PS3’s greatest hits I’ve uncovered another 2013 idol: Tomb Raider.  I’m only just starting out in Lara Croft’s rebooted origin story but I’m already feeling optimistic. Lara is a pleasure to control as she darts and leaps without too much concern for gritty realism. So far, I’ve clambered, climbed, explored, and endured, and it’s all been good fun. There was even an honest-to-god environmental puzzle in the tutorial section which felt like a breath of fresh air after 15 hours of ‘find the ladder’. I’m excited to see where the adventure goes from here.

On Switch I’ve still been gleefully dabbling in Doom 3. Last week I unfairly, and rather flippantly summarised it as being just “Doom 3.” However, the game is actually quite a departure from its run ‘n’ gun predecessors. It leans heavily into its atmospheric, sci-fi-horror setting with moody lighting, minimalist music and great sound design. It’s a fantastically realised world of cold, industrial, militaristic bunkers that puts me in mind of Alien and Event Horizon. There’s even a touch of Paul Verhoeven in some of the corporate videos that cheerfully play on TV screens, oblivious to the carnage around them. My only nit-pick with the port so far is that there’s no option for gyro-aiming. Having been spoiled by the Turok and Turok 2 remasters, it feels archaic to be using the second stick to aim again. Other than that, I’m in heaven…well, hell I suppose. 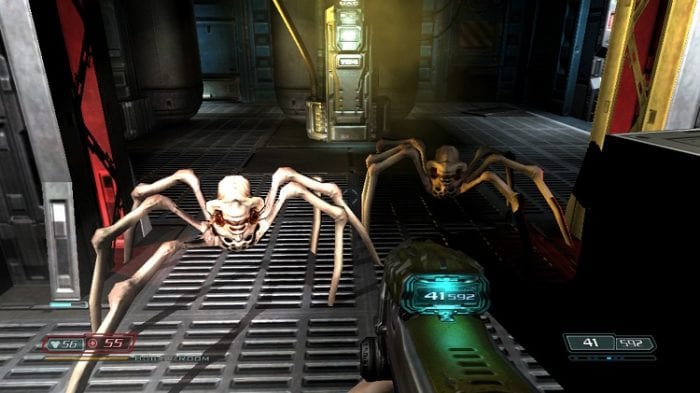 Once again I have decided to become a chosen undead. Dark Souls is a game I go back to time and time again. I’m not a hardcore gamer. I like a story, I like being relaxed, but I also know games. Specifically games with certain reputations.

The concept of achievements is also a bit foreign to me. Aren’t video games meant to be something you do for fun? So naturally, after one day of staying in the too-small apartment of a couple friends, (one of them being an achievement obsessed hardcore gamer) I started playing Dark Souls. I saw he had it, knew what it was, and it was agreed that it would be funny if that was the only game I ever got 100% of achievements in. A year later, I did just that. I took the credence of “git gud” to heart.

Dark Souls is a medieval, fantasy-themed, combat-heavy RPG that allows a variety of character customization, ranging from appearance, to play style, to equipment, to even your own adventure. There is a multitude of classes, spanning hearty warriors, clerics gifted in healing, thieves who know when best to strike, to wizards, pyromancers, and brute-strength barbarians. Moreover, you can dump your stats in whichever skill you want, as you level up through consuming souls and humanity along your winding and treacherous journey.

Many varieties of armors can be found, as well as weapons to suit your needs to become a powerhouse in almost any character build that you want. I’ve been a dex boi ninja, I’ve done the naked Zweihander, I’ve done a pyromancer-only, soul level 1, I’ve done it all!

I treat the builds as challenge runs. My favorite challenge run is the one I have returned to. In a land full of broadswords, bows, clubs, hammers, and katanas, I’ve once again chosen to play the entire game with fists. I am once again brawling my way to a blacksmith, rewarding myself with the Dark Souls equivalent of brass knuckles. I don’t know if there is anything that does less damage. Maybe spitting on enemies? For clarity, I know this is a bad decision. I truly love this game, but evidently not myself, and I’m absolutely dreading Ornstein and Smough. Don’t pray for me, just praise the sun!

[Editor’s note: As someone who has not played much Dark Souls, I did a lot of research Googling. “Dex Boi ninja? Zweihander? That can’t be right… Well, I’ll be damned.”]