Dispatches from Elsewhere S1E4 focuses on Fredwynn. For me, it was the weakest of the first four episodes of the series. But perhaps that is because Fredwynn is not me. Fredwynn is you if you obsess over achieving goals in a way that wrecks your personal relationships, and I’ve always tended (to a fault) to put those relationships first. So Fredwynn is not me, and I struggle to relate to him.

I can relate to Peter’s ennui in the face of the sameness of everyday and work stuff, Simone’s anxiety and struggle to feel at home in the world, and Janice’s sense of loss, regret, and perhaps listlessness, but Fredwynn, well…he’s hardcore.

This doesn’t mean I don’t see his value to the story of Dispatches from Elsewhere; I do. Fredwynn is the one who takes this super seriously. He’s the one who resists the idea that this is all a game and insists that it is a cover for a nefarious conspiracy. And that is an important viewpoint to represent when it comes to Dispatches from Elsewhere and its central mysteries.

In fact, his position is all too plausible. He mentions companies collecting our data and selling it for a profit. And then he suggests that they have now moved into using it for the sake of consolidating power. We (people in general) have been all too ready, if not eager, to hand over our privacy for the sake of better music and streaming recommendations, or personalized advertisements. In Orwell’s 1984 having a telescreen that watches you back was required by the government.  In the real world we’ve freely agreed to carry around things that track our every movement and could be/are listening at every moment.

As Web 2.0 rolled out, maybe many of us were fine with the bargain, if we even took the time to think about it. Maybe the corporations are keeping tabs on me, but if it’s for the sake of offering me relevant coupons or ads for things I might want, where’s the harm? And few of us are likely to see much harm in things like streaming companies making recommendations to us about things we might like.

I guess the big question is whether all of this has moved, as Fredwynn suggests, from collecting data for the sake of money to doing it for the sake of power. He talks about companies moving to overthrow governments and influence elections, for example. Certainly we can point to some real world correlates there. But are they doing this on purpose? Has the quest for dollars been usurped by a quest for power? Or is perhaps all of this still in the service of profit, in a way that doesn’t care about its impact?

On one level it wouldn’t seem to make much of a difference. The Party in 1984 is said to want power for the sake of power. Its logo would be a boot stomping on a human face…forever. We’re told precisely that it’s not about luxury, or comfort.  It’s about perpetuating a structure of power that will go on indefinitely.

In the real world, maybe it is capitalism in the driver’s seat. Maybe it is the desire for profit that opens companies to pernicious forces as opposed to them being nefarious themselves. But it’s hard to see how much that would matter at the end of the day, except perhaps in terms of how we might respond.

Is it a conspiracy, as Fredwynn thinks, or is it the disparate forces of capitalism coming together as if by an invisible hand to create the semblance of one? 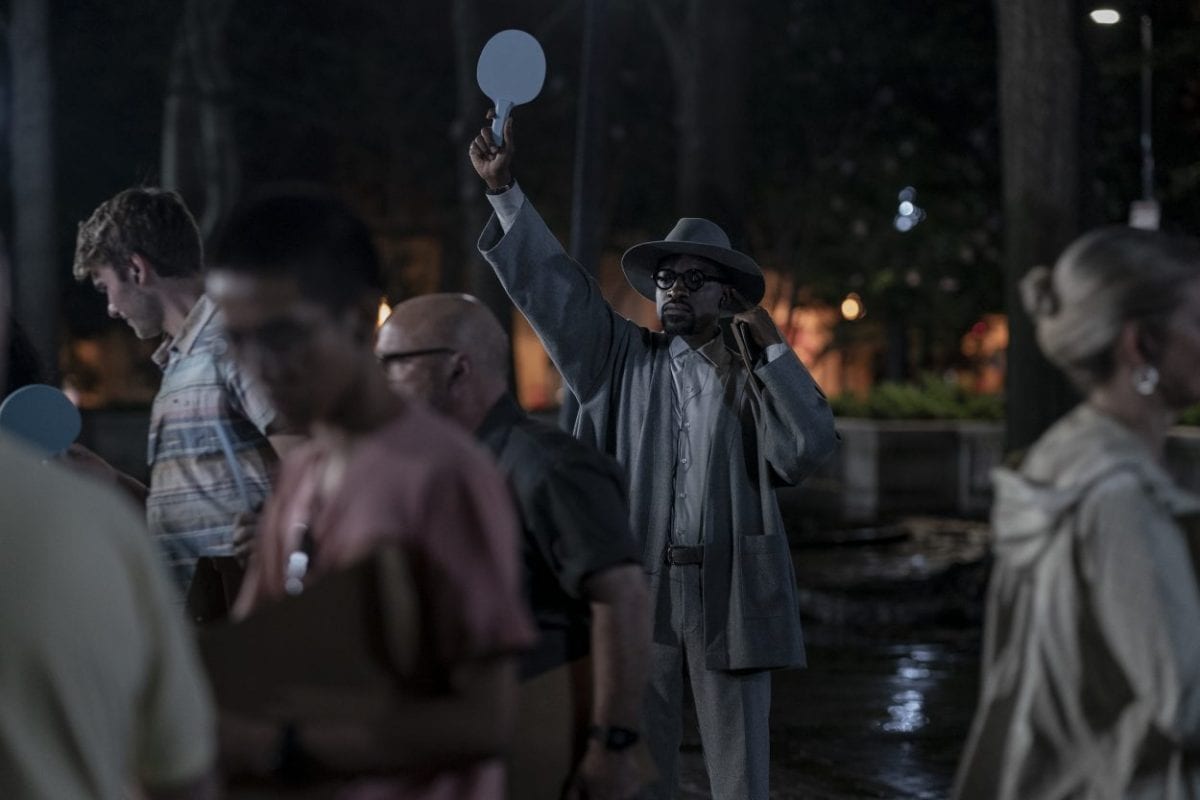 What is Life if It’s Not a Game?

Dispatches from Elsewhere S1E4 picks up with Fredwynn in the trunk of Ocatvio’s car, but this time from his perspective. The first bit of the episode continues along those lines, filling in what occurred for him during the events we saw in S1E3.

This is effective, and creates some interesting moments. One that stands out to me is when Octavio asks him what life is if it isn’t a game.

Of course, there is a question behind that question: what is a game? Is a game something defined by winning and losing? I think not, as there are collaborative games and goalless games. The exquisite corpse is, I think, a game, as is the more modern variant known as Telephone Pictionary.

It works like this: the first person writes a sentence or phrase and then hands the paper over to the second person, who draws an image meant to represent that phrase; they then fold the paper over such the third person can see only the picture, on the basis of which they write words, and so on. It’s a lot of fun, but no one wins. At the end of the day everyone just laughs at or appreciates where we started, where we ended up, and everything in between.

Maybe life is a game like that? And if it isn’t a game, what is it? Certainly the capitalists and such seem to treat it as a game for one to win or lose, as do any number of people in power. Perhaps the question isn’t whether life is a game, but rather what kind of game is it.

Octavio locks Fredwynn in a closet and tells him that it is because he chose himself rather than one of the envelopes provided. That is certainly a clue that Jejune and Elsewhere are two sides of the same coin. He comes across the plan for the evening, and through his disruption seems to make the stage manager cue the Elsewhere folks sooner than intended. That’s another clue.

And then he predicts events as we saw at the end of S1E3. So he certainly has grounds for thinking that everything is coordinated. However it’s not clear that Simone and Janice disagree with that idea; they just aren’t sure that it’s some conspiracy. They are more along the lines of thinking that it is “just” a game, whatever the goal.

Peter, on the other hand, still thinks it might be “real”—whatever that means. And there are a couple of lines from the stage manager and team that suggest that Janice’s whole experience was indeed created from social media and the like. The envelope that Janice took from Octavio’s pocket also seems to feed into this, as Fredwynn claims it was a list of people he could have chosen for the demonstration. They had this prepared for some, but not all, of the people in attendance.

But then, what of Janice’s interaction with her younger self? How and why did that occur? And when Fredwynn goes back and discovers in his memory that he’s missed the tag on the present, leading him to guide Janice in her memory palace to discover what that tag said, how does all of this fit in?

As we learn that it gives a coded address to 3125 Spring St., I must admit I found myself becoming more and more like Fredwynn. Fredwynn is you if you hit on something you couldn’t explain as anything but evidence of a conspiracy.

What awaits? Is it a recondite family?

More From: Dispatches from Elsewhere