Never let it be said that The Flaming Lips do not work hard. In the last 10 years they have released a staggering 12 albums, including compilations and EPs. So after last year’s underrated return to more commercial form with King’s Mouth we now have a collaboration with Los Angeles-based bluesy rock duo Deap Vally—which has resulted in something they are calling Deap Lips, with a self-titled album. Is it as messy as it might sound? Yes. Is it worth listening to? Absolutely.

“Home Thru Hell” is already a track that has embedded itself in my brain since coming out as a single a while back. Upon first listen it has imagery of dragons and some kind of quest, which is fairly typical for the Lips really, but upon subsequent listens it becomes a driving and empowering blast of triumph in the face of overwhelming odds, with its catchy beat and voice effects over the chorus. “One Thousand Sisters with Aluminum Foil Calculators” is a moody instrumental commonplace from The Soft Bulletin and Yoshimi Battles the Pink Robots which is there to simply unwind and link to the next track. “Sh*t Talkin” comes next, and is a simple, stripped-back story of some kind of relationship breakdown. “Yesterday was so simple, no brand name, just people” we are told, and informed there was an over-abundance of interested other parties in the breakdown at one point, before yearning for escape.

“Hope Hell High” is the lead single from the album, and is almost country in its bleak outlook on a long journey and the costs paid along the way. “My highs are making me low” is something we are told as the choral chants make the track soar before coming back down with stuttering lyrics and effects, and it then ends on “Blam Blam Blam Blam Blam Blam!” snapping us out of the warm blanket-like effects of the song.

We immediately launch into “Motherf*ckers Got to Go,” which seems to take all of the wonder of the last track, and then comes to a definitive conclusion with its hip-hop beats, handclaps and childish-like shouts in the background. Lyrically very very simple, and yet guaranteed a place in your head forever. 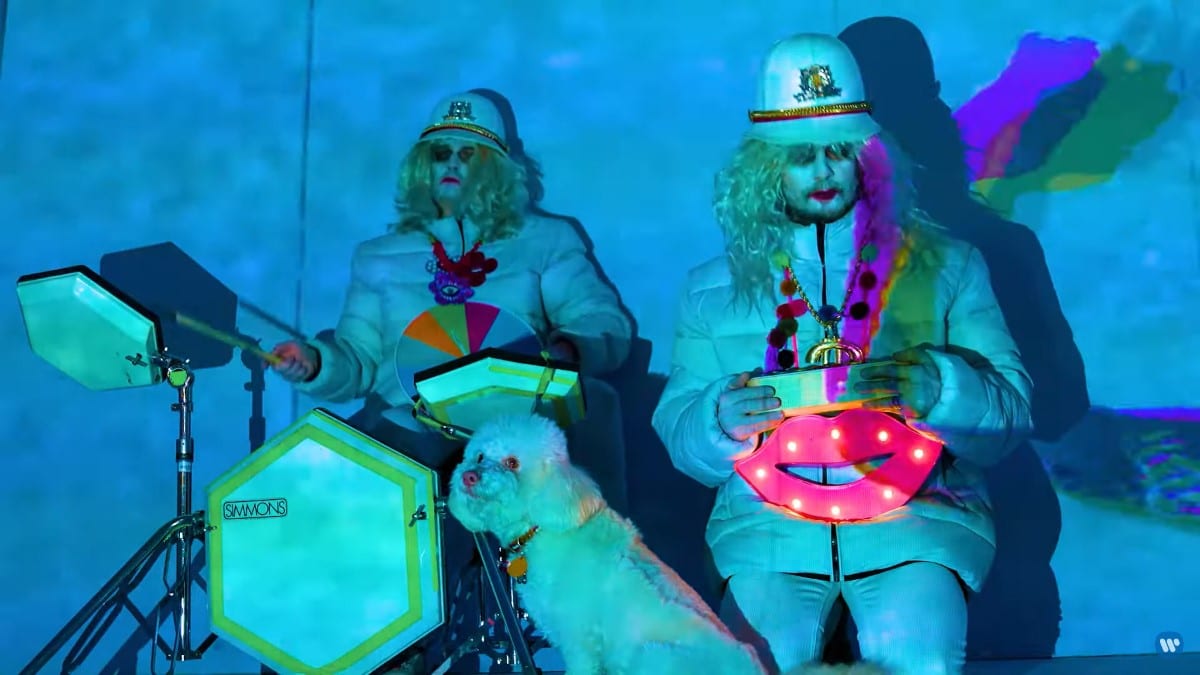 “Love Is a Mind Control” comes next and is more of a Flaming Lips-sounding track at the start before bringing in the familiar twang of Lindsey Troy’s vocals. A story of the general chaos brought about by love and perhaps the whole cause of the early tracks where we are coming to terms with a fallout from some broken relationship as we are told “I loved you a thousand years ago.” It reaches a point of “Becoming one with the universe” and yet still has three minutes or so left to go. Things take a turn with the lyrics becoming darker and wondering what the point is now that love is over. The instruments slow down and are scaled back to leave the lyrics almost pleading for help as our narrator loses themselves completely leaving behind strings and subtle guitars in its wake. It is definitely an album high point both lyrically and musically.

“Wandering Witches” comes next, emanating from the strings of the last epic track of spiritual disintegration. We head into menacing bass lines accompanied by a piano and Troy’s vocals come in more smoky and laid-back now telling us “Whenever you search for pleasure you always find pain.”

“The wandering witches turn off the switches to the life that makes you smile” is a lyric that makes more sense in hindsight as we next head into “The Pusher” with a sudden erratic beat and distorted vocals about smoking weed, popping pills and never touching anything that the spirit could kill. It’s a strange, slight track, which might not be saying much, and is notable for being possibly the only out and out anti-drug song that The Flaming Lips have ever been involved with. It even goes so far as to call out the dealer and pushers for being monsters. “If I were president of this land, I would declare war on the pusher man!” we are told as the track gets even more ambient and haunting despite earlier lyrical contrivance.

“Not a Natural Man” is the penultimate track and has some lyrical connection with “The Pusher” but starts out altogether more playful with a snappier beat and keys. “He feels nothing that isn’t real, turn me on now, come grab the wheel” is a typical lyric here, and the song seems to be looking back on someone who was not who they appeared to be, and is actually as shallow as a puddle. It’s not the strongest track on the album, but is playful in all the right ways. 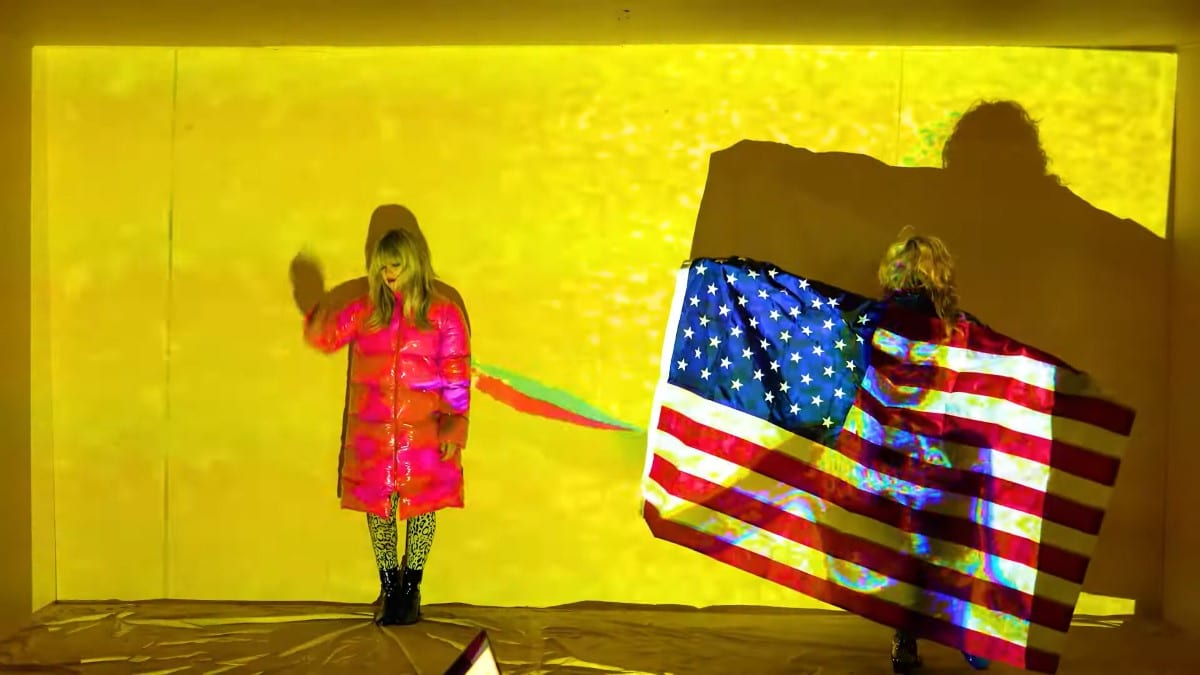 We end on “There Is Know Right, There Is Know Wrong,” which starts with a chaotic blast of noise echoing the lyrics from the last track, and then begins a crunchy guitar riff. The doom laden lyrics about trapped insects come in, and the great line “and now from religion, I have learned so much hate.” Things calm down eventually into more prominent acoustic guitar in a track that tells us “there is no god hiding here in my song” before screaming at us to “wake up.” It is perhaps not the hopeful note that I wanted the album to end on, but seems like a fitting summation of the times we live in.

After the initial very strong five tracks that make up the first half of Deap Lips, the album kind of winds down into inconsistency. The remaining tracks on the album may be more experimental and may reveal themselves better on subsequent listens, but on the third or so play-through, they do not necessarily linger the way the first half does. Having only just discovered who Deap Vally are thanks to this album, I can’t really say what the split is between their work and the Flaming Lips. What I can say (and this may well be a strong recommend in a way) is that even without Wayne Coyne’s vocals being all over this album, it sounds very much like the kind of album the Flaming Lips were releasing in the early ’00s. If you were a fan who fell off after they went all experimental after Embryonic then this may well be right up your alley.

Despite inconsistencies in quality overall, Deap Lips is well worth a listen. It is the kind of psychedelic break-up album that spring was meant for, and could well be just what you are looking for if you want something new and yet somehow familiar.