It’s probably best to address the elephant in the room right at the beginning of this article:

Mighty Aphrodite is a 1995 film written and directed by Woody Allen and distributed by Harvey Weinstein’s company Miramax starring an actress who has since spoken out publicly and fiercely (and admirably) against both men. What a difference 25 years makes.

So what is the best way to approach looking back at this film? Well, the best way is to approach it as what it is: an acclaimed 1995 comedy featuring an Academy Award-winning performance by Mira Sorvino by a writer/director coming off one of the most acclaimed movies of his long career (1994’s Bullets Over Broadway). Much has been written about the personal life of Allen over the past two decades, and it seems like these discussions and arguments will continue for many more years.

Many actors and actresses have come out publically expressing regret for working with Allen in the past. In 2018, Sorvino herself expressed regret in not allowing herself to believe Allen’s 1992 sexual-abuse accuser, Dylan Farrow, in an open letter, and the actress has vowed to never work with him again.

This was two years ago, 22 years from the time Sorvino won the Best Supporting Actress Oscar for her role in this movie. True to her word, Sorvino has not appeared in another Allen film since. So should their single film collaboration be forgotten and never spoken of? I’m of the belief that no, it shouldn’t. It is possible to find an artist’s work meaningful while they themselves may allegedly have engaged in abhorrent behaviour. For example, we are all familiar with the prosecution and subsequent trial of Roman Polanski after he was charged with and found guilty of having sex with a minor in 1977. Yet his films are still widely applauded, some considered to be among the best movies ever made, and are available in public libraries everywhere.

It would be wrong to condemn Allen’s work on those merits as well. It would also be wrong to condemn art that many people participated in, and Sorvino’s Oscar win is now a part of motion picture history. It’s a win she arguably deserved. Sorvino was encouraged to create and find this character from within herself, which she skillfully did. That’s a history we should never forget.

So, with that ugliness now mentioned, let’s look back at the movie. 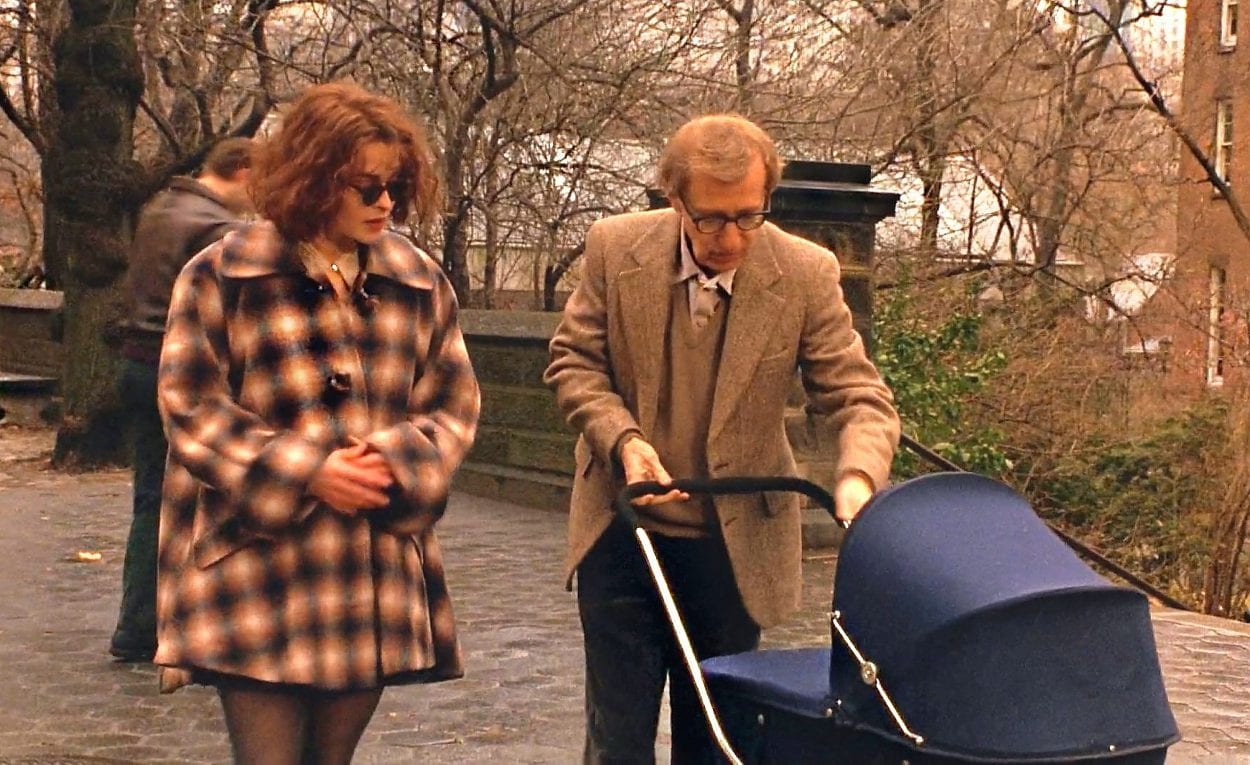 After a decade of making dramatic films such as Hannah and Her Sisters and Crimes and Misdemeanors during the 1980s, Allen returned to his comedic roots at the beginning of the next decade. Alice (1990) and Husbands and Wives (1992) were his only overtly dramatic movies during this decade. 1993’s Manhattan Murder Mystery and next year’s Bullets Over Broadway were certainly more comedic, but 1995’s Mighty Aphrodite was his most lively and inspired work of the ’90s.

In Mighty Aphrodite, Allen plays Lenny Weinrib, a New York sportswriter who’s married to the younger, stylish art dealer Amanda Sloan (a wonderful-as-always Helena Bonham Carter). Wanting to begin a family, the couple decides to adopt a baby boy, whom they name Max. The boy grows to display a high degree of intelligence, and while Lenny would like to take credit for their gifted son, he grows curious about Max’s true genealogy.

Acting behind Amanda’s back as she’s occupied with designing and opening up her own art gallery, Lenny discovers that Max’s mother is a young woman named Linda Ash (Sorvino in a now-legendary dazzler of a performance). What Lenny finds shocking is when he learns that Linda is a struggling actress who moonlights as a sex worker and also appears in X-rated movies under a name I won’t mention here but is appropriate for those types of movies.

After their initial first encounter, Lenny is shocked that someone such as Linda could give birth to such a tremendously bright kid. No, he’s not just shocked—he’s flabbergasted beyond belief. Linda towers over the shorter Lenny physically, and her personality is certainly fitting for a woman of Linda’s stature. Linda is full of life. She’s flirty and welcoming, but certainly not a pushover. Without having read the screenplay, it’s hard to gauge how much of Linda is Allen’s creation or Sorvino’s or some cosmic combination of both. At the time of this film’s release in November 1995, Sorvino had said that Allen encouraged the actress to shape and formulate this character of her own volition, and the “mighty” in the movie’s title couldn’t be more fitting in regards to Sorvino’s powerful, inventive performance. 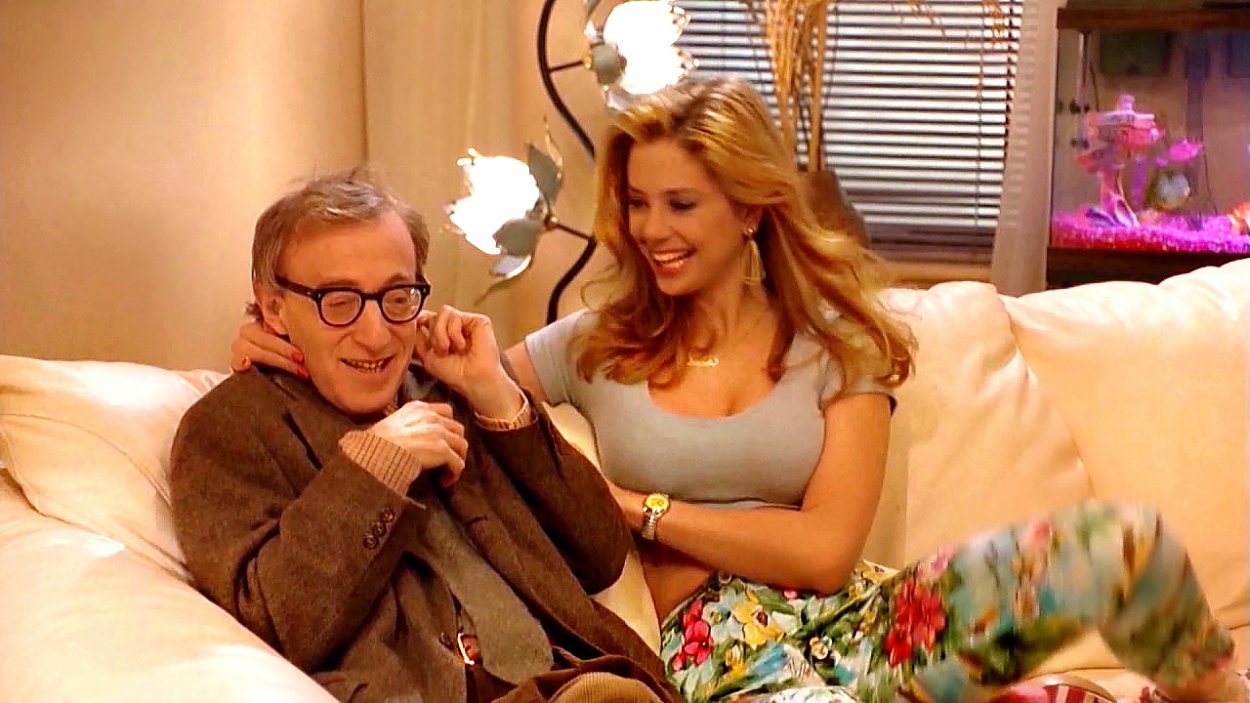 Lenny begins to feel paternal towards Linda and wants to see her escape her life of selling herself to strangers. He wants to help her leave that existence behind her and make something more of her life. Creeped out by Lenny the first time they meet, as he probes a little too deeply into her background, she throws him out of her apartment.

Linda, who we find out is really named Leslie, lets her guard down when he approaches her a second time. She admits that she did have a child years ago who she put up for adoption and has regretted that decision every day since. Lenny takes Linda to the race track, where they bet on a horse that comes in last. This time Linda feels better about Lenny, who encourages her to focus on legitimate acting.

He also wants her to meet a nice guy. Enter Kevin (Michael Rapaport), a boxer who moved to New York from his life as an onion farmer in Iowa. Lenny thinks the two would hit it off, so he arranges a date for them. Linda and Kevin enjoy themselves, and things start to look up for her, but Lenny still has to get Linda out from under the thumb of her pimp, Ricky (Dan Moran), as Linda has to keep her life as a porn actress separated from Kevin. You can tell this movie was made in 1994, as there was no internet then, and by extension no Facebook to look up any potential dating partners.

Lenny tells Kevin that Linda is an actress who just appeared in Schindler’s List (which Kevin could have easily checked by just renting the recently released VHS), but he goes along with it, because in his view the Nazis in that movie were some real “tough motherfuckers.”  Their date goes well, and Linda seems happy when Lenny continues visiting her. Things go bad, however, when Kevin attends a friend’s bachelor party and sees Linda on a TV which just happens to be showing one of her adult movies. With that, the happy relationship is over, and Lenny, who’s marriage to Amanda is seemingly kaput as well, she has been spending romantic time with her art dealer co-worker Jerry (Peter Weller), tends to Linda. Linda and Lenny are two broken, rejected people with only each other at that moment. 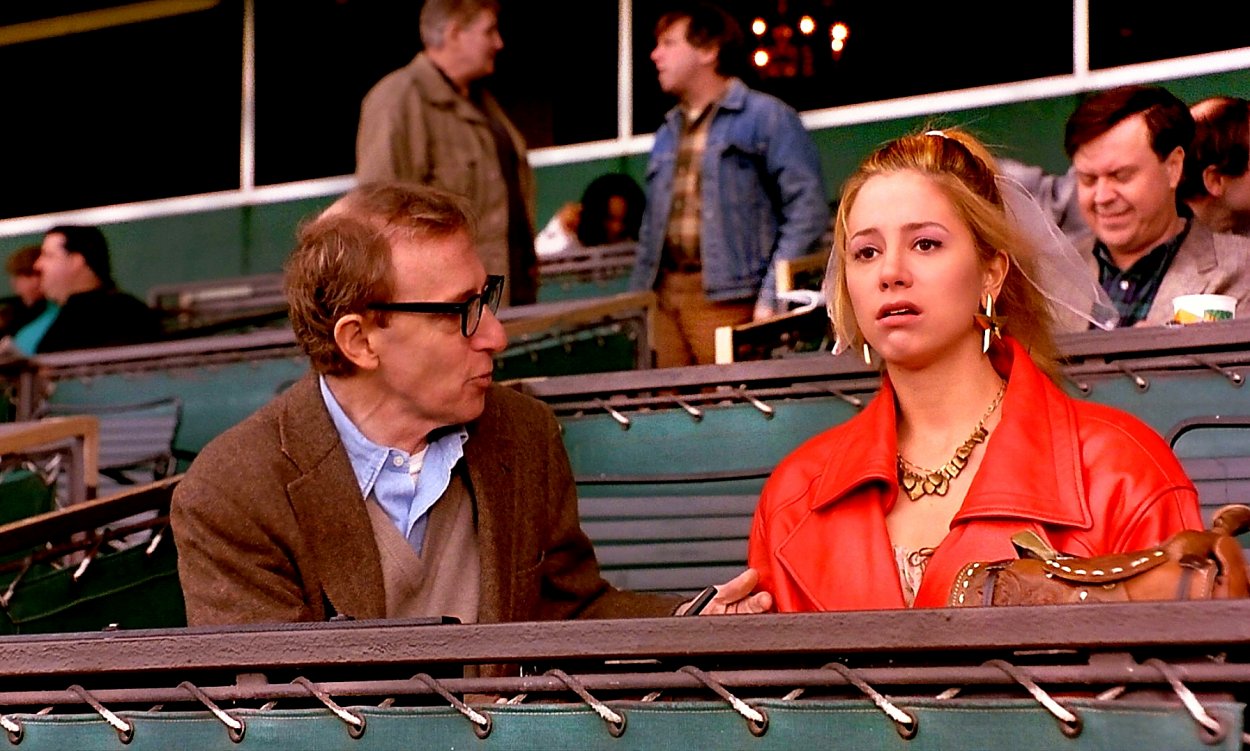 The final 10 minutes show us what happens to Lenny and Linda down the road. No, they don’t end up together, but there is a connection formed that they will each have to live with. It sounds more dramatic than it is, but the Woody Allen of the mid-’90s was in a much more optimistic place than the Woody Allen of the late ’70s, or at least his movies were.

Linda and Lenny meet up one more time a year or so later, and then she’s quickly out of his life once again. The movie ends with a Greek chorus breaking out into an exuberant rendition of “When You’re Smiling,” and with this, we are a million miles away from the heart-crushing uncertainty that closed out Manhattan in 1979 or, for that matter, the despondence which ended Husbands and Wives just three years earlier. Whatever was going on in Allen’s personal life wasn’t dampening his optimistic movie endings. Nobody was singing in an Allen film before this (except for Annie Hall, and even then that song was one of loss and heartbreak.) 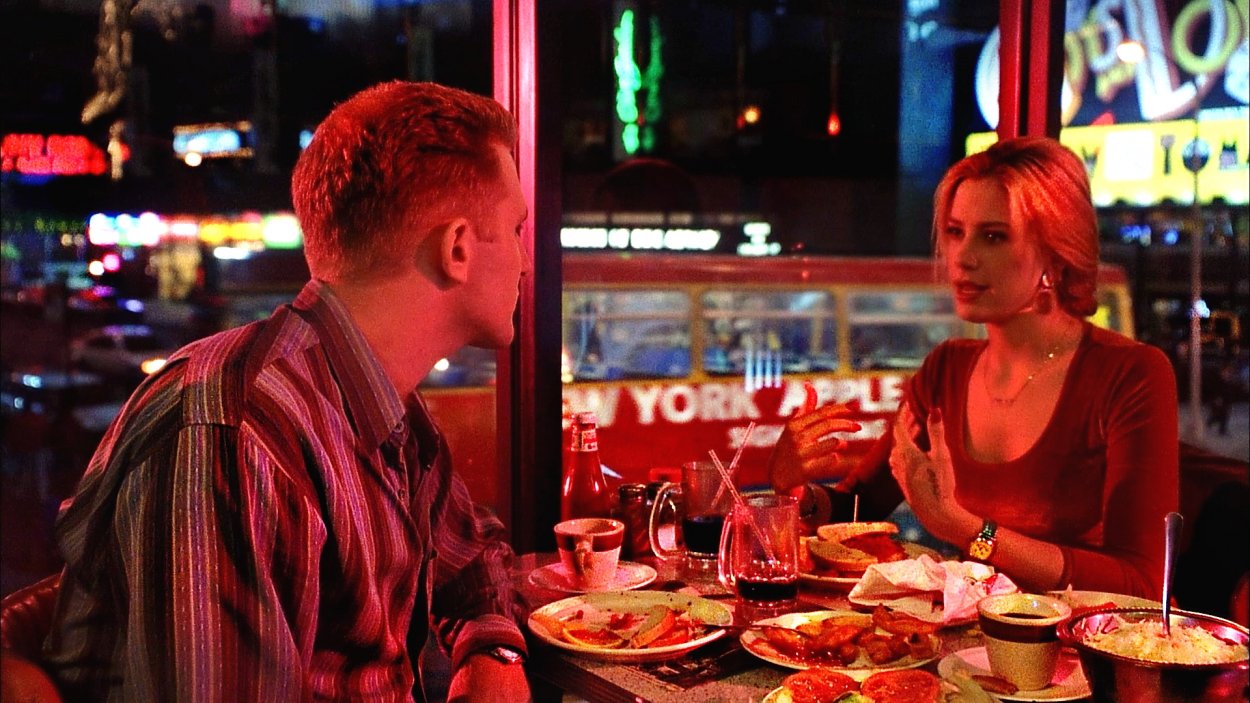 One can imagine that Allen enjoyed this cheery ending so much that he decided to make his next movie, 1996’s Everyone Says I Love You, into a full-on musical, which he did. That movie boasted an all-star cast including Drew Barrymore, Edward Norton, and Julia Roberts. His next movie, Deconstructing Harry, featured Tobey Maguire, Robin Williams, and Billy Crystal, and the movie after that, his La Dolce Vita-inspired Celebrity, featured Charlize Theron, Kenneth Branagh, Winona Ryder, and Leonardo DiCaprio.

The big stars aren’t lining up these days to appear in an Allen movie (save for Scarlett Johansson, who still supports the filmmaker). We are living in very different times, for sure. Appraising any work of Woody Allen in 2020 is going to be met with varying reactions, but keep in mind that it is the work being discussed here, and not the man. 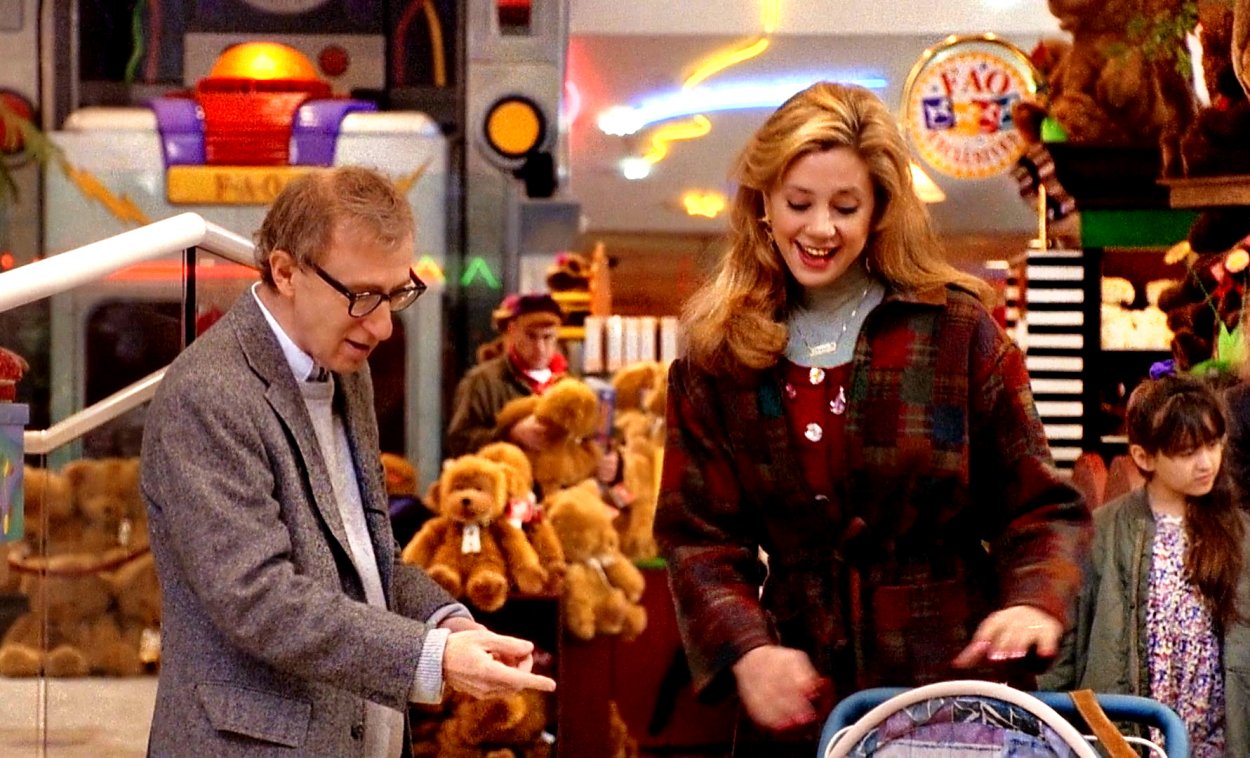 A movie is a collaborative entity with performers, crew, and technicians all doing their part. Sorvino even acknowledges in her open letter that Allen offered her the room to create Linda according to who the actress felt the character was. The voice was among Sorvino’s many contributions to this literally larger-than-life (she hovers over Allen by a good foot in publicity photos) person, as was Linda’s on-screen vulnerability and often battered heart—the one Linda does her best to put back together and go on smiling. Perhaps more so than any other character in Allen’s vast filmography, Linda does know that when you’re smiling, the whole world does smile with you, and that’s a message as important today as it was 25 years ago.