Whether you’re social distancing by force, choice, or habit (that’d be me), let’s take a look at what games the 25YL crew are playing this week! Also, in honor of St. Patrick’s Day—and by sheer coincidence—it’s an all Irish panel of gamers! May we cheer you up with our sheer Irish-ness, and just be happy that we didn’t sing “Imagine” or “When Irish Eyes are Smiling” at you, in some smug, elitist attempt to magically cheer you up.

So folks, this week I’ve started a little game called Spirit Hunter: NG, the second entry in the series of visual novels. I consider myself fan of the format (and before you ask, no, I don’t play the hentai stuff), with the fantastic Nine Hours, Nine Persons, Nine Doors cracking my top ten games of the past decade list. I played the original game in the series titled Spirit Hunter: Death Mark not too long ago and found it to be pretty compelling. There were six chapters total, and each one centered on a different and new spirit. Essentially, you use classic point and click mechanics to explore different environments and learn about the spirit haunting them. Then, at the end of a chapter, you have to use all the information you’ve gathered to defeat a ghost.

The catch is that there are two outcomes to each confrontation, which play out like turn based battles. You can simply “kill” the ghost, which stops them from haunting the area, but results in the death of a partner, or you can “purify” them, which requires an extreme eye for detail and for you to use every single bit of information given to you to figure out how to put them to rest. It’s a fantastic premise and the first game pulled it off rather well, with some fantastic urban legend-type spirits and a cool, overarching narrative about a rise in paranormal activity in Japan.

This all leads me to the second game, NG (short for No Good). I’m about two hours in, and this one surprisingly takes its time more than the first game did, but even so, I’ve already gotten two potentially interesting spirits to fight later on, with one of them being a river dwelling woman who kills people and leaves corpses all over their bodies. So far, the game’s protagonist (who I named Melvin FartBar), is searching for his missing cousin and trying to get to the bottom of a mysterious black letter he received in the mail. There’s also the matter of his young cousin’s classmate haunting a section of the city. She was killed by a car after also receiving a black letter in the mail. It’s all got me intrigued, and I’ll be sure to update you on where the game goes next week. 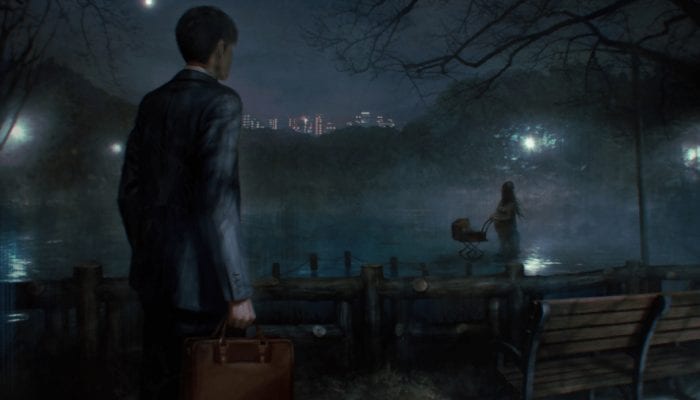 I will say that I’m a bit annoyed at the lack of quality-of-life improvements. Bizarrely, the first game didn’t allow you to save at any time, just during point and click investigation sequences. For some reason, you still can’t save anywhere in NG either. In my experience, this is a standard in pretty much all Visual Novels. The point is that it’s supposed to be like reading a book, meaning you can pick up right where you left off. If the uber-obscure, low budget cult classic Theresia: Dear Emile, which released back in 2008 can let the player save anywhere, I see no reason that the Spirit Hunter series can’t allow for the same thing. The first game also contained illustrations of various female characters in compromising positions, which was creepy in all the wrong ways (it tried to play off some pretty freaky situations as sexy, which was my biggest gripe with the first game). So far, I’ve already gotten a full screen shot of a character in lingerie. I can’t say I’m proud typing this out, and I know how this sounds, but I play these games for the ghosts, goddamnit. It was a blatant attempt to add T & A into a pretty creepy and straightforward horror game the first time around. I hope there’s some restraint shown in that regard in this sequel, because it was never sexy. Instead, it often felt like it clashed with the tone, and just came across as entirely unnecessary.
Still, when it isn’t trying to provide jarring fan service, the series has proven itself to be a worthwhile and creepy good time, and I’m excited to dive further into NG.

I returned to “Vita Island” after finishing Bloodstained. I am replaying the classic Killzone Mercenary. I completed the normal campaign months ago but there’s a plethora of additional challenges and modes to come back to. I chipped away at a few trophies that were easy to acquire. The platinum trophy for this game is out of the question with the amount of multiplayer I would need to jam. I’m normally not a fan of shooters, but Killzone proves why it’s one of the top 10 renowned games on the Vita. The amazing graphics and sound design showed how much potential the Vita had. Sad to see how Sony misstepped with this handheld. I plan on playing Uncharted: The Golden Abyss next, which will be my first Uncharted game. Whenever I need a transition game to pick up for a few days, Killzone Mercenary will be my security blanket.

I’m still playing Zelda: Breath of the Wild and have defeated my third Divine Beast. The difficulty of the boss took the game down a few pegs for me. It wasn’t about finding the best strategy, and instead the frustration was in the controls. Sometimes Link doesn’t lock on properly. This Divine Beast is lightning fast, so one small mistake and you take a big hit. Ultimately defeating the boss was a relief, and I plan to continue the adventure, but a small break is needed.

I’ve come to realize that I take a long time to finish games. Seeing Collin beat Yakuza 0 and Conor finish Bloodstained while I simply managed to get a bad ending after three weeks of playing the addictive bargain title Goblin Quest, I must admit that my ability to blast through a game is not what it once was.

I’ve never been someone that rushes through games (except as a kid when you rented a game and you had maybe two solid days before the video store wanted it back). I’m an explorer. I always go off the beaten path as soon as I possibly can, simply because I know games hide all the secrets, collectibles, useless trinkets, and other such things that make PSN trophies ding, down those roads less taken.

That being said, my backlog of games is getting ridiculous. So ridiculous that when I power on my Switch or PS4, I am overwhelmed by how many choices I have. Truly, a first world problem.

I decided to commit to playing a single game from beginning to end, in that order! The game I chose was a surprise even to me: Octopath Traveler. You see, I didn’t even own it! I bought it on a whim even though I heard mixed reviews about it. I have been dying for a classic JRPG, and the “8 different character stories that converge at the end” structure gave me heavy Dragon Warrior/Quest IV vibes, and there is no other form of gaming that comforts me like a good old JRPG.

I’ve only just begun, and I chose to start with Primrose, the dancer, whose story is rather dark so far. Her quest for revenge against the men who killed her father has led her to make some dangerous choices. The dialogue actually gets skeevy at several times, and even though it’s totally in character for the person saying it, I was surprised to hear it in a major Nintendo game.

Almost immediately after those awkwardly adult moments, another stylized moment occurs that attempts to pull at your heart strings so mechanically, I may have cringed a few times. Right now, I just don’t know if Octopath Traveler is going to have a story I care about, or one I’ll be making jokes about as I play.

It really doesn’t matter, though. I usually check out of the story in most JRPGs anyway. Mostly because a lot of them have the same exact story. This one certainly looks like the story is gonna “go places” so I don’t think I’ll be bored.

And the old school battle system is sexy.

It’s easy to make yourself feel guilty while playing video-games. Why aren’t you doing something more worthwhile? You could be doing some housework, exercising, phoning a neglected family member, reading the entire works of Tolstoy, or learning how to change the alternator on a Ford Fiesta. Occasionally though, you realise just how wonderfully important the medium is.

With many parts of the world on lock-down and the news in an endless spiral of dread, video-games have become more essential than ever. As people are having to self-isolate, work from home, and avoid social interaction they offer a form of unparalleled escapism.

The eager anticipation of upcoming games has been the only positive thing I’ve seen on my newsfeed for the last couple of weeks. Excitement for titles like Animal Crossing, Doom Eternal, and the remakes of Final Fantasy VII and Resident Evil 3 remain unflappably high in spite of the carnage elsewhere. It’s a real testament to the joy and escapism games can provide and to the sense of community it can enable for many.

To stave off my own sense of impending doom I’ve been continuing my adventure in 2013’s Tomb Raider, and I have to say, I’m loving every minute of it. I’m playing on PS3 but if I didn’t know better I’d swear it was a PS4 game, it looks so gorgeous. The fictional island of Yamatai (the game’s setting) is in equal parts beautiful and brutal. I’m at a point in the game where wind and rain batter Lara as she traverses the treacherous mountainside ruins.

The elements are more than just for show though, with many of the game’s environmental puzzles involving fire, water and wind. One such example had me opening huge shutters to allow the ferocious gales to move a platform suspended on ropes closer to an elevated area allowing me to progress. Another, using a similar method, had me manipulating a makeshift wrecking ball to bring down the support struts of a giant bell.

Lara’s arsenal of weapons, skills and equipment is constantly growing to allow for more complexity in traversal, combat and puzzle solving. A pickaxe upgrade allows for the climbing of some cliff faces, and a rope tied to an arrow can be fired across gaps to create zip-lines. Certain hub like areas expand themselves with each upgrade allowing for access to secret tombs, collectibles and items.

So far Tomb Raider has been a wonderful blend of exploration, platforming, puzzle solving, combat and, of course, the usual AAA cinematics. It’s a game that’s easy to get sucked in and lose yourself to, and right now it’s exactly what I need.