What kind of movie is fit for social distancing? First, I’m looking for something that will whisk me away, take me to another place for 90 minutes and make me forget about the chaos happening in the world. Second, ideally I’d like to have some fun and spend some time with interesting characters who make me laugh. Last, I do still enjoy being impressed, whether that be through acting, directing, writing, or a mix of all three. With that criteria in mind, The Hunt was exactly the kind of movie I hoped to spend a quarantined Saturday afternoon in watching. 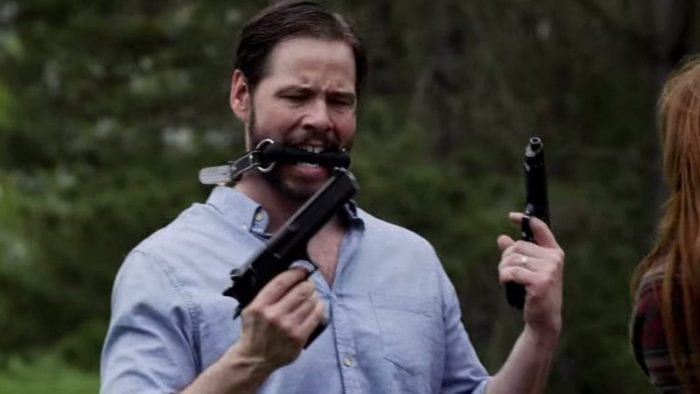 The Hunt doesn’t necessarily take me to a far away land. In fact, the world is basically our own, where keyboard warriors, class warfare, and cancel culture abound. The movie follows one group of the rich elite, who, after a tasteless joke leaves them cancelled and jobless, decide to make their joke a reality and hunt “redneck” Americans for fun. The rules of the hunt are pretty simple: drop 11 people into an undisclosed location, provide them with weapons, and then gruesomely pick them off one by one. However, the plan is thrown out of whack when Crystal (Betty Gilpin), a receptionist for a car rental company, gives the hunters more of a fight than they bargained for.

Crystal wakes up in a clearing with an assorted cast of characters, from a big game hunter to a self-proclaimed “gun whore.” What they all have in common, at least according to the group who abducted and dropped them there, is that they, in one way or another, publicly voiced their distaste for Athena (Hilary Swank) and her group of “woke” friends who seem like they’d fit in perfectly at an Armitage family auction in Get Out.

Crystal is clearly our story’s lead, with every other character barely cracking 10 minutes of screen time and having some laugh-out-loud descriptions on the film’s IMDB page (I highly recommend you check it out). Gilpin is absolutely phenomenal as our mysterious twangy heroine, with her no-nonsense attitude and kick-ass survival skills. She is like a modern-day Lara Croft as she masterfully wields every weapon put in front of her and slices and shoots her way to the end. Gilpin, like Samara Weaving in Ready or Not, is the audience’s conduit and becomes a horror icon perfectly suited for 2020. 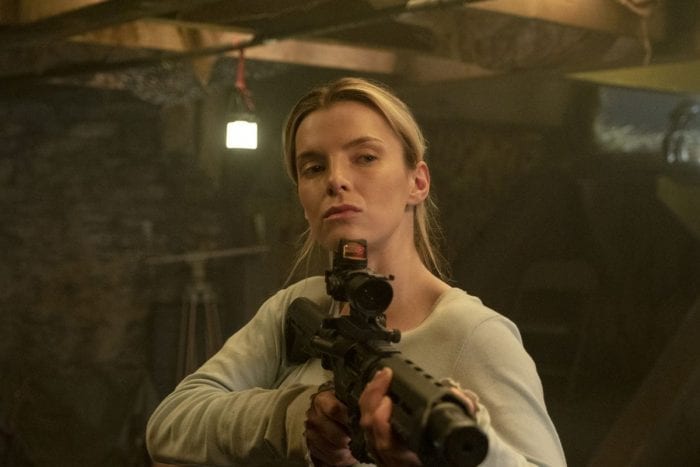 Now, it is hard for me to be unbiased about the script, as it is helmed by Nick Cuse and the man who I think is in a league of his own when it comes to writing and story construction, Damon Lindelof. I’ve heard mixed reviews of the film and that had me wary going into it. Would this be the first Lindelof-penned piece of media that I didn’t enjoy? Luckily for me, Cuse and Lindelof gave me exactly what I craved from the pair with wacky but realistic dialogue and interesting storytelling. One of my favourite aspects of the film is that it takes awhile for us to figure out which of these hunted characters we are supposed to latch onto as our lead.

At first, it seems like it might be Yoga Pants (Emma Roberts – yes, that is how she is credited) until her head gets blown off a couple of minutes after she is introduced. Then it might be Justin Hartley, who isn’t even credited in the film at all, but then he steps on a landmine and gets blown to pieces. It’s genius and absolutely hysterical storytelling that left me screaming with laughter each time the person I thought was going to be our lead died. There is also a Lindelof time jump, as we begin Act 3 going back a year and then eight months before the events we are seeing in order to fill in the necessary blanks about what is going on and why the hell it is happening.

I really did love the experience of watching this film and I can’t for the life of me imagine why Universal decided to pull it last year under the President’s scornful eye. There are no political lines drawn in the sand, no side that is shown in a better light than the other. If anything, leftist White liberalism is the most satirized belief system in the whole film, with those characters being presented as the most ridiculous ones. I think The Hunt is definitely worth the $19.99 price tag and I’m so glad Blumhouse released it early for us to enjoy. If you are looking for a ridiculous story rooted in reality that will give you a good laugh in trying times, check this one out on VOD!