I am the child of divorced parents. There never had been a time where I lived in the house with my Dad growing up, aside from when I was born up until the age of three. Many times growing up when I would tell a story my mother would say, “You tell a story just like your father.” I would always think to myself, “How could this be? I only get to visit with him. I’ve never lived day to day. How could I sound like and tell a story just like Dad?” As I got older and started listening to my Dad share stories, I realized I, in fact, did tell stories just like my Dad. Tim Burton’s brilliant movie Big Fish is about stories and storytelling. It is about the relationship between a father and son and believing in someone, even if that means letting go of the truth of who that person might be. I don’t believe this only applies to father/son relationships, in fact, this movie made me realize even more the relationship and connect I feel with my Dad. Big Fish is about discovering that who you are might not be the reality that surrounds us, but the people that do that bring it into focus.

Big Fish is the story of Edward Bloom (played brilliantly by Ewan McGregor as the younger Bloom and Albert Finney as the older).  After living a life of extraordinary coincidences and wonder, Edward is on his death bed. He already knows how it will end; a witch lets Edward see how he will die through her glass eye. His son, Will (played by Billy Crudup) comes home to “reconcile” with his dying father, with his pregnant wife Josephine in tow. Of course, there is now a new audience to Edward’s stories and what beautiful stories they are. Edward tells Josephine how he was so outstanding in sports that he was able to leave Ashton and meets a giant, Karl, along his way. Both men venture down two different paths, one paved and one twisty turvy and supposedly haunted. Edward takes the one less traveled and that leads him to Spectre. The only way I could describe Spectre is to imagine It’s a Wonderful Life’s Bedford Falls through the lens of Edward Scissorhands. In Spectre, Edward was told he was expected. Not to go off into Lynchian territory, but I always took this part as this being part of his brain or a near-death experience. Since just before this Edward is getting “attacked” by bees and jumping spiders. So Spectre was how he imagined the perfect place with people who stayed forever, rocking on their porches, and not having a care in the world. A proverbial light at the end of a dark tunnel, but Edward wanted more, which is why he leaves Spectre and meets Karl again—on the other side—where they both join the circus. 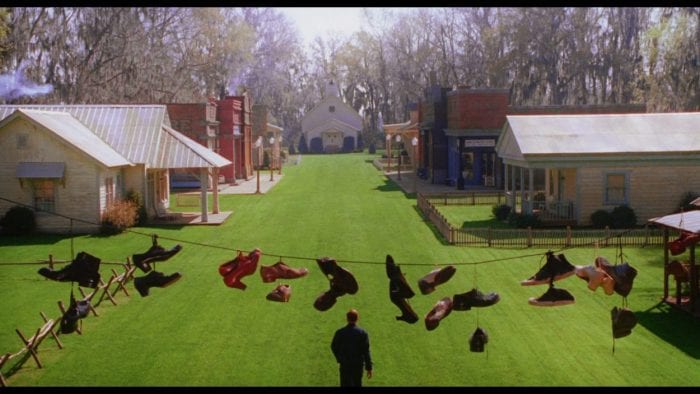 This is where Edward meets the love of his life, Sandra Templeton (played by White Oleander’s Alison Lohman).  Too bad she’s already engaged to Don Price, fellow Ashton classmate of Edward’s. In a truly romantic gesture that only movie magic can bring you, Edward plants daffodils that cover the entire front of Sandra’s college dormitory since it is her favorite flower. He takes a beating from Don, which makes Sandra decide she’d rather love the total stranger that is Edward than marry Don. And with that, their love story begins, and as we see through flash-forwards has remained. It was hard not to fall in love with Ewan McGregor in this scene. His sincerity in playing Edward, and really grasping what this man was about and what he wanted for his life and to be for Sandra made you melt into a giant puddle. A scene that brings home the message of storytelling as a way to share your love story, is in an extremely heart-wrenching and beautifully shot vignette between Edward and Sandra (now played by the dynamic Jessica Lange). Like the title of the movie suggests, Edward is fully submerged in a bathtub, opening his eyes and seeing his beautiful wife above him. When he comes up for air, he says “I was drying out.”  To which she just answers, “I see.” and gets into the tub with him, both seeing how much one needs the other and in a moment that breaks my heart, as Sandra realizes that the love of her life is dying, she says simply “ I don’t think I’ll ever dry out.” 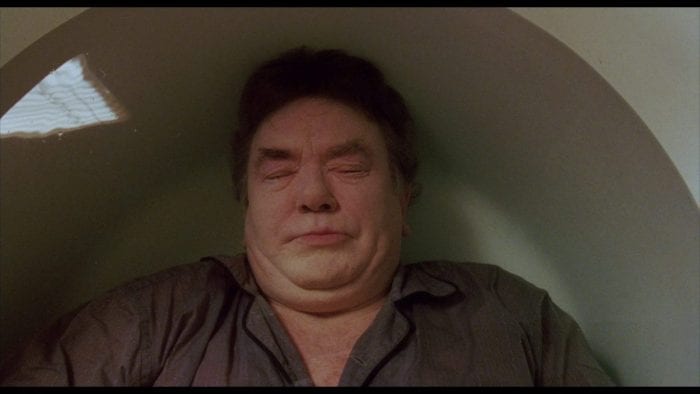 Will, still not believing his Dad’s tall tales, travels to Spectre and meets Jenny (played by Helena Bonham Carter, who also played the Witch at the beginning). Jenny was the mayor of Spectre’s daughter. She explains to Will that when Edward left, Spectre ceased to be what it once was.  So when Edward returned to Spectre, he saved it from bankruptcy by purchasing it at auction and with the help of his circus friends, helped rebuild and bring it back to its former glory. Upon hearing this, I believe Will starts to wonder to himself how many stories that his Dad told him hold truer than he thought. He finds out his father had a stroke and is now in the hospital.

This is the part that gets me every time and has me sobbing as I attempt to write this. Will realizes that his father needs to hear one final story. The story of his life, completed. So Will recounts to his father stealing him out of the hospital, driving him in his favorite car to the river and all the people, the stories that Edward told Will. All those important people in his life lining the pathway down to the river where the love of his life, wading in the river is waiting for him, to be let go and to become what he always was…a big fish.  It’s metaphor galore, but oh my, it is a beautiful send-off and it hits you in the feels like nobody’s business. And just like that, the life of Edward Bloom comes to a close. As people get word of Edward’s death, many of the people that Will (and Edward) spoke of show up in Ashton to say goodbye to the great Edward Bloom. It is there that Will realizes his father’s legacy. Kent Brintnall sums this up in his piece for the “Journal of Religion and Film: Big Fish”. He says, “Will comes to understand then, that his father—and the rest of us—are our stories and that the deeper reality of our lives may, in fact, not be our truest self.”[1]

I believe that this movie affects me so much because my father in many ways is Edward Bloom. He’s bigger than life, revered in many circles and can tell a story that would have you buying the Brooklyn Bridge at full price. He has an amazing heart, loves his family and friends with a fierce sense of loyalty, and has a great big belly laugh I can hear even when I don’t get to see him much (especially right now under quarantine). I have often wondered when I am faced with the knowledge that he may not be of this world anymore, could I take on that gauntlet of great storytelling and keep swimming and become my own big fish? I guess time will tell, but until then I am glad to have him to continue telling his stories and am thankful for Tim Burton’s storytelling to make me see my own big fish in another light.