In the new Shudder original The Room, the age-old axiom “be careful what you wish for” takes on a whole new meaning, especially in this burgeoning age of coronavirus. Imagine, if you aren’t living it already, being stuck indoors and your only companion is Olga Kurylenko. Oops, I meant for this to sound like a bad thing and not one of my own fantasies. Let’s start over. Imagine being stuck indoors with all your personal possessions, as well as all that society finds valuable and meaningful, like money, art, and culture, and you were unable to go six feet beyond your property’s boundaries without all of it turning to dust.

What meaning would you put on items valuable to an outside world you no longer have access to? Or, rather, the items themselves don’t have access to? And what of life itself? Can life be fostered within such a short, limited space? Anyone can create their own interior world but what happens when that world can’t expand? The Room asks external what-ifs that most horror films save as subtext and, as a result, offers some scary and wicked surprises that stick with the viewer long after the film has ended. 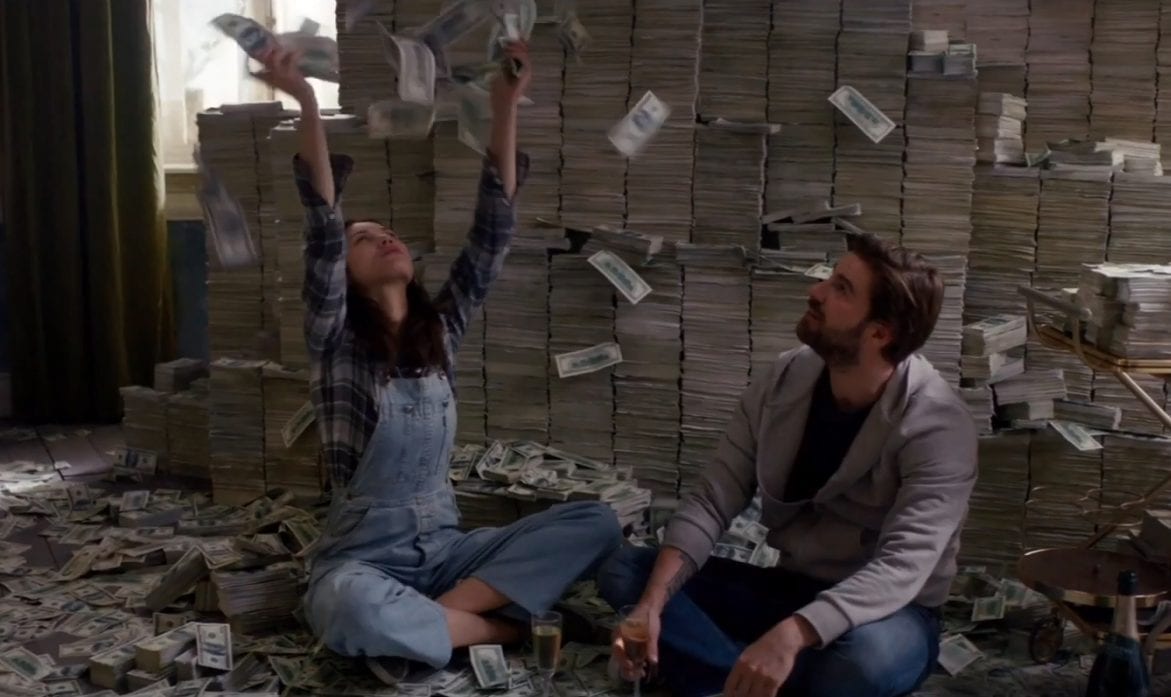 Kate (Kurylenko) is a high-profile businesswoman looking to escape the corporate world. Her husband Matt (Kevin Janssens), is an artist looking for inspiration. Together they purchase a remote home out in the country with the hopes of starting anew. Their new home is massive but it carries with it many secrets and oddities. For one, its labyrinthine electrical system is impossible to understand, its snake-like tendrils reaching throughout every nook and cranny of the house. More sinister, the prior occupants of the home, a childless couple, were murdered by an unknown man simply named John Doe sometime in the past.

Most peculiar though is a hidden room that Matt discovers in which any material wish can be granted. What starts as “I need another bottle of whiskey” becomes “I want $1,000” to “I want the Mona Lisa”. “The Room” thus becomes a tempting realm of gluttony and excess for the couple harboring an unspoken sadness. For Kate is barren and The Room offers her a chance, finally, to have a child. But the rules of The Room are varied and drastic and the introduction of life not only threatens Matt and Kate’s marriage but the foundations of reality itself.

Director/Writer Christian Volckman (Renaissance) uses his first live-action feature as a cerebral springboard for compelling what-if scenarios that should engage any viewer, whether they are a connoisseur of horror films or not. The Room is certainly less typical of the horror genre, preferring to go more psychological and theoretical than visceral though, by the film’s end, there are some Stuart Gordon/David Cronenberg-esque moments of madness that will disturb just about anybody, horror veteran or not.

The film relies on its two leads to carry the entire film virtually by themselves and the casting is top-notch. Kurylenko is far more than just the Bond girl she is often referred to as and provides a moving performance as the torn Kate. Her layered performance will likely go unappreciated thanks to the genre of which she finds herself in and that is a shame. At the beginning of the film, she provides Kate with a sense of buried sadness yet ingrained playfulness. You truly believe she is married to Janssens’ Matt and that helps sell the foundation of the story of two people in love about to encounter the greatest struggle of their lives.

Kurylenko comes alive when her character realizes she can become a mother for the first time and her tonal shift, from a sad acceptor of her fate to a fierce protector of a new life, is impressive to see. Equally impressive is Janssens as Matt, who knows that asking for famous paintings and money is one thing but creating new life is another. Matt’s love for Kate coupled with his wariness for a new child in his life is compelling. You often aren’t sure if Matt is going to hug or stab Kate’s new child and it makes for particularly tense viewing.

The Room does suffer from some low budget doldrums. Despite the excellent casting, two people can only be asked to do so much and the lack of change of scenery does produce a bit of cabin fever for the viewer. But overall there is not much to complain about. The Room is a well thought out psychological thriller with superb acting and enough potent scary what-ifs to keep the discussion alive long after the streaming of the film is dead.