Heat is my all-time favorite film. Since the first time its end credits rolled, Michael Mann’s crime thriller stuck with me as the greatest film achievement I had ever witnessed, and that has remained the case to this very day. How does a film reach such a lofty precipice? You often hear people talk about their favorite films, and the common element is usually the happiness or smiling or contentedness it generates; basically, a sense of fun. But Heat is not a film that brings happiness. Heat is not fun.

Heat is a film of sorrow. A poetic tale of hubris and masculinity that, on either side of the law, leads to loneliness and sadness. A tale not just of two men clashing as the same sides of a separate coin, but of a city as a beacon of too many possibilities: fortune, fame, ruin, infamy. Los Angeles is a character in itself in Heat, and she is omnipresent throughout the film’s running time, dictating the pace and balancing the forces of good and evil with a blind eye (though many may find it a cruel one).

In the end, you have the mano-a-mano showdown in the heart of the city: Al Pacino vs. Robert De Niro in the City of Angels. What more could you ask for in cinema? Two of the greatest living actors going toe to toe in one of the world’s most grandiose and fantastical cities. Buoyed by an insane supporting cast (including, but not limited to, Val Kilmer, Jon Voight, Ashley Judd, Tom Sizemore, Wes Studi, Ted Levine, Danny Trejo, Natalie Portman, and so many more), and shot with beautiful precision by Academy Award nominee Dante Spinotti, Heat is a nearly three-hour crime masterpiece that has only gotten better with age.

On a basic level, Heat tells the story of two men amid their surrounding world of crime. One of these men is Neil McCauley (De Niro), a cold and calculating master criminal who leads a dedicated crew of similarly skilled thieves in high-risk, high-reward “scores,” utilizing advanced technology and science to make out with outrageous sums of cash and capital. Members of his crew include marksman and demolitions expert Chris Shiherlis (Val Kilmer), muscle and techie Michael Cheritto (Tom Sizemore), and driver/communications man Trejo (Danny Trejo).

Adding an extra piece of muscle named Waingro (Kevin Gage) to their newest score of an armored truck proves a fatal error, as the unhinged ex-con, not a normal member of the crew, murders an armored guard, forcing McCauley and crew to execute all witnesses before making off with their stolen booty: millions in bearer bonds owned by a money-launderer named Roger Van Zant (William Fichtner). When Waingro escapes execution by McCauley and company, he becomes, as director Michael Mann describes it, a contagion let loose on Los Angeles: always a threat to McCauley’s gang as a lingering danger.

But Waingro’s knowledge of McCauley’s crew is not the only danger. The highly publicized, execution-style murder of the armored security guards brings Detective Vincent Hanna (Pacino) onto the scene with his own crew of crack investigators, including Drucker (Mykelti Williamson), Casals (Studi), Bosko (Levine), and Schwartz (Jerry Trimble Jr). Hanna is the law version of McCauley: dedicated and focused, with laser-eyed precision to detail. Where he differs is in his emotions. He takes his cases personally and will stop at nothing, including losing those he loves, to bust any and all crews, including McCauley’s, that will hurt innocent people.

But as Hanna slowly tracks McCauley, and, in turn, McCauley tracks Hanna, the two men come to form a mutual respect for each other. The two hunters respect the fact that they are each other’s prey, and that defeating each other would be the jewel in each other’s crown. They don’t desire to kill one another, but only to get the better of each other. For McCauley, beating Hanna means freedom and some semblance of life without the “heat” around the corner, and maybe, for the first time, a chance to live with a woman he has fallen in love with. For Hanna, beating McCauley not only means he took down a master criminal, but that he saved future lives and can relax…until the next crew strikes.

With Van Zant and Waingro seeking vengeance and Hanna breathing down their necks, McCauley’s crew is primed for one more score before calling it quits, making Los Angeles a pressure cooker of crime and violence. Will McCauley succeed in eluding Hanna’s impressive investigative grasp and avoid the “heat,” or will Hanna emerge victoriously and take McCauley away in chains?

Though director/writer Mann admits to his bias on the audio commentary recorded in 2005, he believes De Niro and Pacino offer what amounts to the best performances of their careers in Heat. It is hard to argue with him, though I’m sure many arguments can be made. But who really has the edge in a battle between such heavyweights? Pacino or De Niro? De Niro gets less flashy material, and in general, I prefer that in acting performances. De Niro is ice cold as McCauley, but despite that, he makes you feel sympathy for someone clearly evil and sociopathic.

But I go against my own instincts and give Pacino the acting edge in this one, despite his getting to be “louder.” Though Pacino would later be typecast a few years after this as the screaming type, his subtle instincts as Hanna in Heat make the character an all-timer for me. Mann and Pacino both describe Hanna as a hunter, one who is constantly on the prowl. If you watch Pacino’s hand or eye movements in even the quietest of moments, he’s always on the move, ready to pounce. And his ability to leap into violent verbal action, something that is in exact opposition to McCauley—like when Hanna hilariously harangues one of his criminal informants with “Give me all you got!“—makes for exciting, unpredictable entertainment.

And while acting is certainly at the forefront of Heat, with a murderer’s row of a supporting cast that is simply absurd to list in its entirety here, one can’t leave the Heat experience without marveling at its technical brilliance. Known for his artistic approach with primary colors, most particularly blue, Mann treats each frame of the film as a painting. In fact, on the commentary for the film, Mann referenced the fact that Heat itself was inspired by a painting of a man looking out into the distance while his gun and wallet lay on a table, something replicated exactly in the movie (naturally whilst saturated in blue). 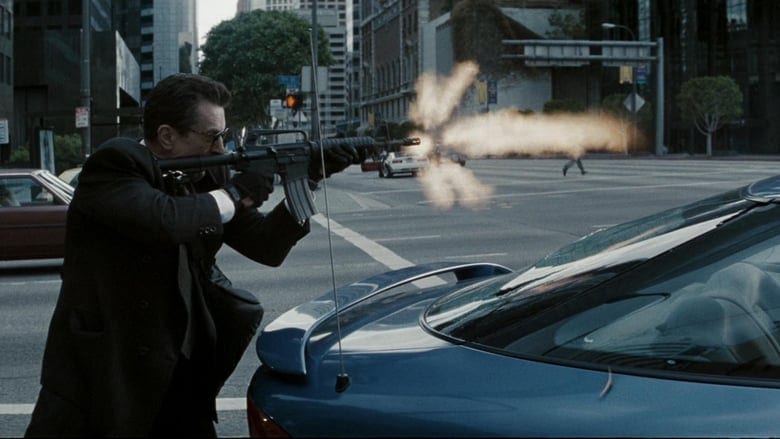 And Mann’s dedication to depicting both criminal and law-enforcement culture as accurately as possible, coupled with his artistic flair, is what makes Heat so thrilling. Not only are the crime scenes full of actual crime-scene photographers and evidence-gatherers, but the sky is full of real LAPD helicopters. And the “criminal” actors are supervised by real thieves and gangsters so that they can be as accurate and, in the case of their lethal firepower—as depicted in the famous downtown gunfight that marks the film’s action zenith—deadly as possible.

And Mann/Spinotti’s dedication to allowing LA to speak using just its appearance, by letting it breathe with long, wide shots, allows Heat to have an expressive voice that dialogue and hyperactive cutting can’t relay. Heat was, amazingly, cut with four total editors, something you think would cause a cacophony of ideas and themes, but somehow, with Mann’s guiding touch, the film strikes an impressive balance of serene, quiet, and kinetic action, much like McCauley and Hanna themselves. One minute, McCauley will be on a hilltop, observing the skyline of LA at sunset before the camera cuts to Hanna pacing his way through a Koreatown market, anxious and antsy. It never feels forced or anxiety-laden, but deliberate and meaningful and, above all, artful.

Of course, if you were to take anything from Heat, outside of the acting titans going head to head, the technical prowess, the artistic beauty of the shot selection, or the deliberate skillfulness of the editing, it would be the themes. And Heat primarily deals with pride. And it is why I said earlier that Heat is not a fun film, because pride, as they say, cometh before the fall. Even our heroes in Heat suffer for their pride. Hanna is, for all intents and purposes, a good man. But he sacrifices his marriage and his social life for the pursuit of his prey…the thrill of the chase.

Mann mentions on his audio commentary that in the world of Heat, there are no two people in the world like Hanna and McCauley but them. They both need each other despite their need to defeat one another; predators can’t live without prey. And while we see Hanna as a tragic hero, we also see McCauley as a tragic villain, mainly because their pride leads to some significant failure. Both Hanna and McCauley deserve our sympathy even if, on paper, we don’t think they should. It is the dichotomy of what exactly is good and what exactly is bad, and what we admire in people, that makes our engagement with McCauley and Hanna so exciting…and tragic.

Heat is worthy of an entire book, let alone 2,000 words, but alas I will end my analysis here. For those who haven’t seen it, I’ve kept it as spoiler-free as possible so you can enjoy it for the first time, 25 years from when it premiered. But for those who have seen this masterpiece of crime cinema, I hope you revisit it again. Like a fine work of art, a pristine painting, if you will, it only gets better with age, and new details emerge as you inspect it over time. I expect it to remain as powerful as ever 25 years from today as well.