Occasionally, we have particular years that stand out in terms of the overall quality of the films released. 2019 just so happened to be a great one, and 2010, 2007 and 2002 also stand out as having an overabundance of great things happening in the cinema. It is widely agreed that 1999 was a particularly great year. Not only did we have the likes of The Matrix, Fight Club and The Phantom Menace redefining genre cinema, but we also had The Sixth Sense, Magnolia, Being John Malkovich and Three Kings challenging our perceptions of what the typical awards-bait movie could be. Major directors such as Alexander Payne, Paul Thomas Anderson, and Spike Jonze all rose to prominence. As a result of the deluge of quality, some significant works are often overlooked. One such casualty of 1999 was Antonia Bird’s Ravenous.

Ravenous was a troubled production. Initially launched with director Milcho Manchevski who was then sacked two weeks into filming, Fox hired a replacement in the form of Raja Gosnell who the cast then mutinied against feeling they were not right for the film. Star Robert Carlyle then suggested his friend Antonia Bird, whom we had worked with on Face (1997) and Priest (1994). The resulting film feels very schizophrenic; at once a sweeping, desolate epic much like The Thing (1982) in the old west, and at the same time a kind of lurid, black comedy horror. 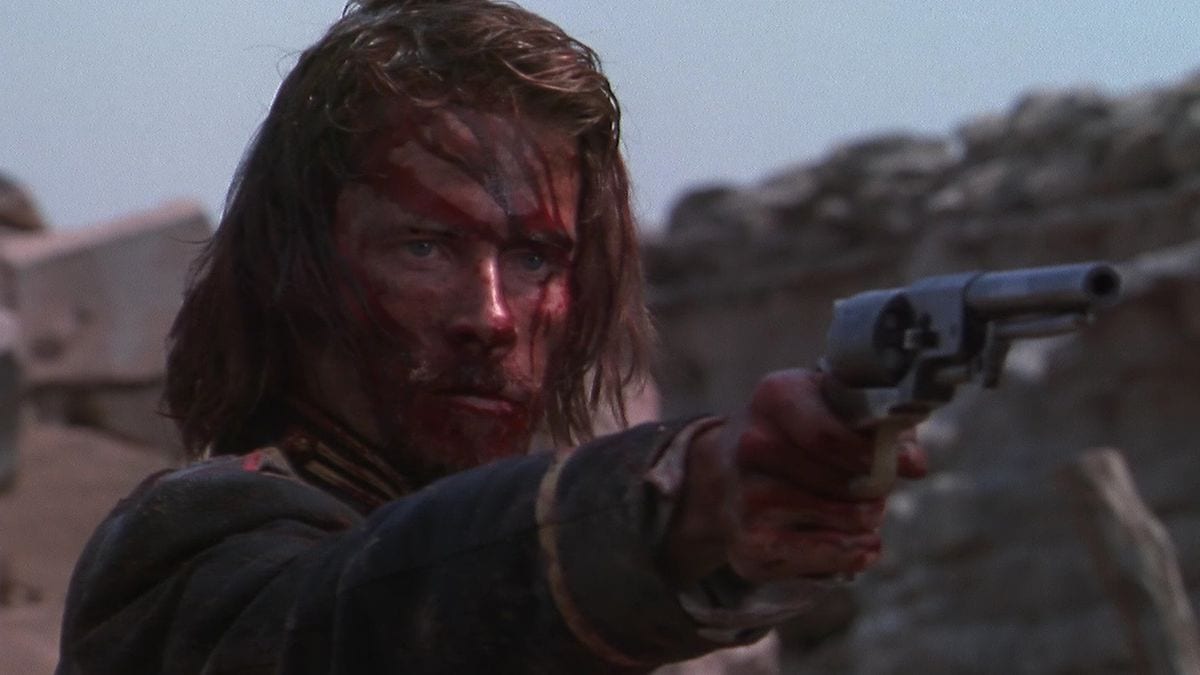 Very loosely inspired by the Donner Party disaster of 1847, Ravenous finds disgraced military captain John Boyd (Guy Pearce, Memento 2000) banished to Fort Spencer in the middle of nowhere with a skeleton crew who spend most of their time fighting off boredom in alternately productive and self-destructive ways. The fort operates as a sanctuary for west travelling new arrivals seeking their fortune in the gold rush, so one day Calhoun (Robert Carlyle) appears at the fort delirious and traumatised. Calhoun tells a story of being stranded with his crew of settlers who then began to starve when bad weather trapped them in a cave. Calhoun shamefully tells the fort inhabitants that he was forced into cannibalism as a result with a man named Ives whose hunger could not be sated.

The crew mounts a rescue mission to the cave where Calhoun says that he abandoned the last survivor with the treacherous Ives. The problem is Calhoun has actually succumbed to the Native American legend of the wendigo, and now believes that by consuming the living he is absorbing their power and becoming something more than human. The rescue mission ends in a massacre with only Boyd surviving, and nobody believing his story of what happened to the missing soldiers. Calhoun, of course, comes back and is actually a part of the military and the Ives of his horrific story now set on recruiting Boyd into the cannibal fold.

Ravenous does not feel like anything that came before it. A big part of this is the score by Michael Nyman and Damon Albarn; it kicks in over the opening credits and worms its way into your brain the way few scores have done in modern times. It is at once both quirky, and suitably epic in terms of matching the mountainsides, forests and hills present throughout the film. Perhaps thanks to the mixture of cooks and resulting tones; Ravenous feels very out-there in terms of how it is presented. Guy Pearce and Robert Carlyle feel like they are giving everything to these performances, and yet somehow the supporting cast seems mostly there to fulfil comedic relief archetypes. You have the hard-core soldier, the stoner, the drinker, and the religious wimp, and bafflingly somehow this works when backing up the two leads as they are absolutely committed to the material. 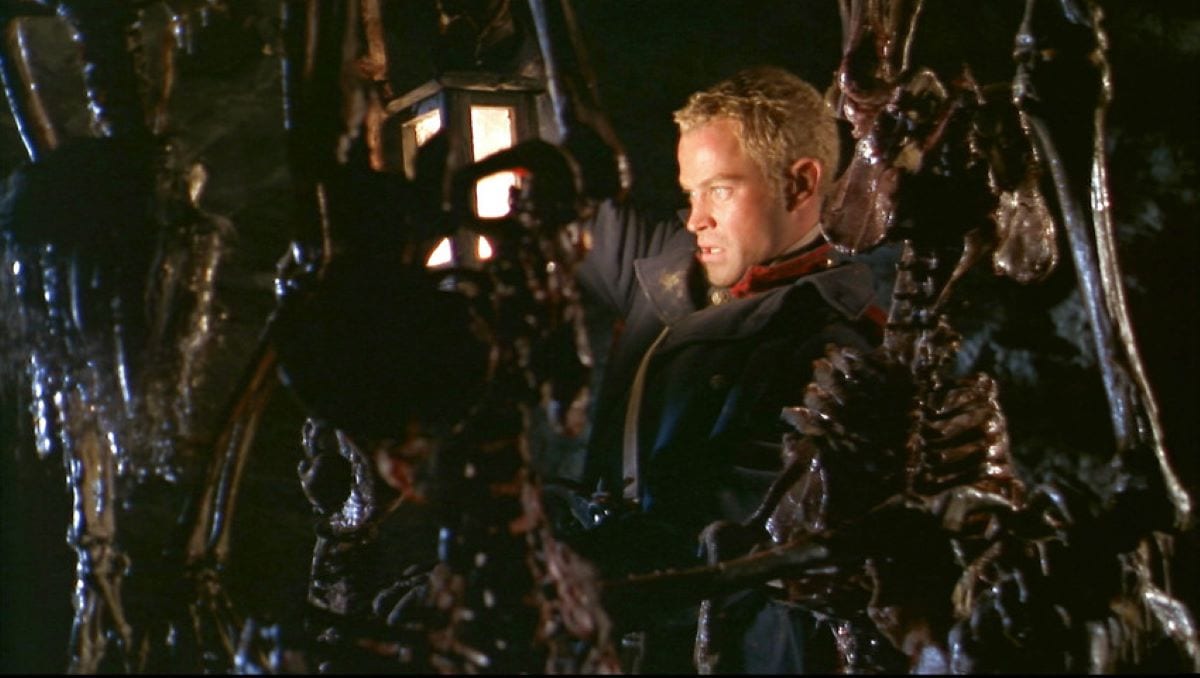 At barely an hour and forty minutes long, Ravenous doesn’t give the viewer breathing room to contemplate any of the philosophical themes that Calhoun spouts, or consider how people spent their time way back even before the radio. It starts strong, introduces all of the characters and then we are off into cartoon violence, dark comedy and death-defying leaps off mountains to avoid being eaten. You do wonder what the original vision for this was before Manchevski was given the elbow, but at the same time, the fact this weird concoction was made within the studio system in the ‘90s is one of those small miracles we should all be thankful for.

One of the things that we know was changed was the finale. The final confrontation was due to take place across the burning rooftops of Fort Spencer, this was then scrapped in favour of Boyd and Calhoun just beating the hell out of each other. It is a fight scene for the ages (recalling John Carpenter’s They Live from 1988) playing out almost like a live-action looney tunes skit with stabbings, log braining’s, and finally an inventive use for a bear trap. The idea being that thanks to wendigo giving them strength, both Boyd and Calhoun have become very hard to kill.

Perhaps Fox was hoping Ravenous’ blend of The Silence of the Lambs (1991) and Unforgiven (1992) combined with the then-hot Guy Pearce, Robert Carlyle, and David Arquette, would bring the crowds in, but sadly this was not to be. After a confusing ad campaign soundtracked by Rob Zombie – Ravenous made a paltry 1 million at the US box office when released in March 1999 and then was barely released worldwide, struggling to a 2 million total overall. The film found its audience on video where it was a solid hit and then gained further fans through subsequent TV showings. Nowadays Ravenous is an interesting and perhaps quietly influential movie that still holds up, and deserved to be counted with the rest of the pack that made 1999 a year that stood out. 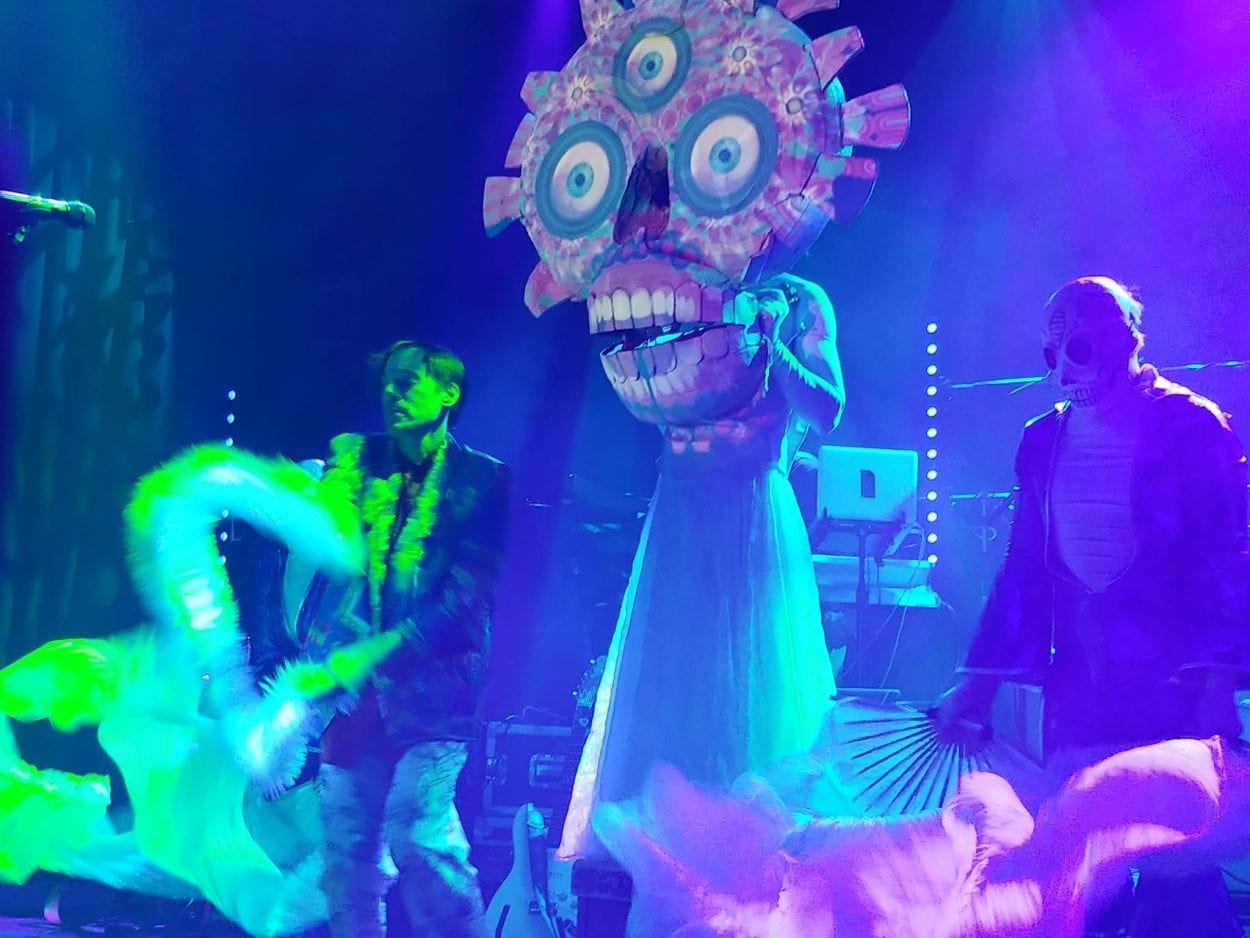