Daisies, written and directed by Věra Chytilová is one of the most unique films ever created. So much so, that it’s hard to decide how to begin discussing it. The film was released in ‘66, one of the most poignant years in pop culture. The swinging sixties were in full momentum and it was still a very innocent time. On this side of the Atlantic, The Beatles were being chased down the street by screaming girls and they were making them pass out at shows with their saccharine, poppy love songs. On the other side of the pond, The Beach Boys were serenading people with their angelic harmonies about spending time at the seaside and the American dream.

It wouldn’t be until the following year, when the Summer of Love started, that hippies would be unleashed on the world. The Velvet Underground, The Doors and Pink Floyd would all make their debuts, providing the alternative, counter-culture that was sorely needed. But for the moment, the youth of the time had a lot of energy and enthusiasm but weren’t quite sure what to do with it yet. This is where Daisies comes in, as it perfectly captures that essence; that youthful exuberance that everyone can relate to in varying degrees in one way or another, at some point in their youth.

Chytilová‘s film is very experimental, verging on being a piece of performance art. It has little to offer in terms of plot and is therefore difficult to describe to someone who hasn’t viewed it. The film has to be seen and even experienced to be appreciated for its trippy spirit and innovation. It follows two girls, Marie I and Marie II played by the perfectly cast Jitka Cerhová and Ivana Karbanová respectively. The fact that they both have the same name and that they’re barely mentioned says something in itself, that they’re not important in the context of the film. We start with them waking in a whimsical fashion, much in the way you might expect characters from a kid’s TV show to do. 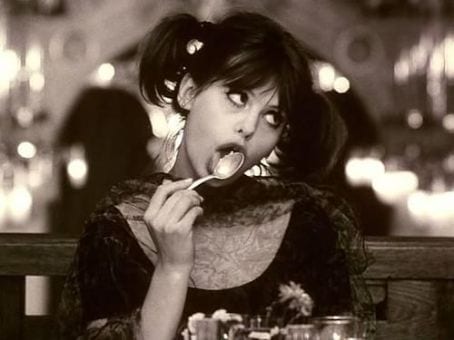 The opening sequence is wonderfully surreal, much like most of Chytilová’s film. I won’t go into much detail about their actions and dialogue, as it would sound absurd in this medium and spoil its sporadic nature. There’s no thought given to any realistic constructs, the girls can be in one place and then walk off-screen into another location. Likewise, we can be viewing them in technicolour, black and white or with different filters from one minute to the next. Chytilová also includes numerous cut-aways of various things that are interspersed between everything to accentuate feelings and the random structure.

Despite its bizarre, off-the-wall style, Daisies touches on deep issues that include feminism, hedonism, nihilism and existentialism (all the isms). They dance between these themes (often literally) as they wander through the landscape of the film, like two girls having a big night out. Their unbridled sense of freedom and lack of inhibitions reminds me of my nights out during University and makes me deeply nostalgic.

Daisies feels like the highlights of the most memorable outings from that period, all condensed into just over an hour. Their carefree spirit is palpable and joyous to watch from a distance. These feelings are supported by the girl’s general fondness for tomfoolery, mischief and causing chaos. It’s also accentuated by multiple scenes in bathrooms and the girls commenting on how people don’t realise how cold it is in the morning. This is a thought I’ve had many times when on the way home from a night out as the dawn chorus is driving me mad. 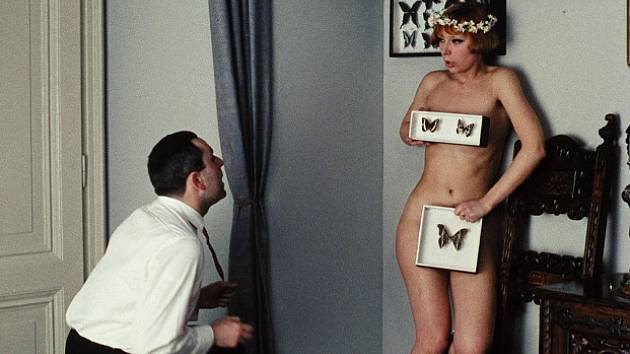 A large part of the film is based around men trying to woo these pretty girls and failing miserably. Their attractiveness stems more from their charisma and playfulness, more than anything else. It’s these kinds of girls that seem nearly impossible to pin down, which makes them meaningful pursuits and the most desirable. They hold all the power and they know it too. It helps that the Czech language is rather beautiful and the way in which they speak it is very alluring. This culminates in an iconic scene where Marie II is teasing a butterfly collector, she’s naked and covering herself with framed butterflies. It’s the most provocative scene in the film and saucy to say the least, with the butterflies acting as a metaphor for her beauty that should be appreciated.

These girls certainly know the art of the tease and that sometimes, the sexiest thing can be everything but sex itself. Again, this reminds me of some girls I encountered in my youth, when boys  pursued them most vigorously but we were all so unsure of ourselves, so we played endless, flirtatious games of cat and mouse. The girls leave men professing their love for them over the phone, whilst they lounge about and do arbitrary things. They also wine and dine with older men and once they’ve gotten what they want they send them packing—literally—on a train. This is a recurring motif and is clearly a metaphor for being femme fatales; it feels like girl-power at its best to me.

Due to Daisies’  hedonistic and trippy spirit, drugs are suspiciously absent. As mentioned previously though this is an age of innocence just before they impacted culture in a big way. Their influence is still felt though and the alcohol flows heavily as well. My favourite drink, Johnnie Walker is even name-checked with adoration. What seems to be the girls’ replacement for drugs, is food. It’s highly fetishised and plays an important role in the film. Whether it’s jars of gherkins placed around the room, or apples scattered over their bed, there’s always something close by to have a few bites of and cast aside. This hedonistic behaviour may be a metaphor Chytilová‘s using for what’s to come in the Summer of Love.

There are plenty of creative set-pieces throughout, including the girls lighting tissue hanging from the ceiling on fire, bathing in a tub full of milk together and even cutting each other up. For the latter, Chytilová uses some very rudimentary camera techniques but is then followed by one that’s quite shrewd and holds up well. The girls paint their eyes very heavily black, a slick and stylish look that offsets their colourful clothing. They have a slick style and are often wearing corresponding polka dot dresses, à la Comme des Garçons.

The girl’s motto and the basis for their philosophy is: “Does it matter?” A simple yet profound question that’s at the root of their nihilistic musings. It was one of the things I remembered most vividly from the chaotic film after the first time I saw it. There’s something very affecting, the way Marie II sweetly asks the question to Marie I. It also reminds me of the Andy Warhol quote that’s a variation of this: “So what?” Something that he was known for saying in response to a myriad of things. As he was making waves at this time as well, I don’t think it’s coincidence and it seems like perhaps this feeling of nihilism was more universal at the time.

When no one is paying attention to their antics, they even start to question their own existence. They come to the gleeful conclusion that they do exist when they look at the mess they leave behind them and exclaim it in unison whilst marching in sync. The climax of the film comes when they happen upon a great banquet that has been laid out and they gorge themselves on the food and drink, then end up swinging together in the chandelier. It makes me wonder if this is the origin of the expression. 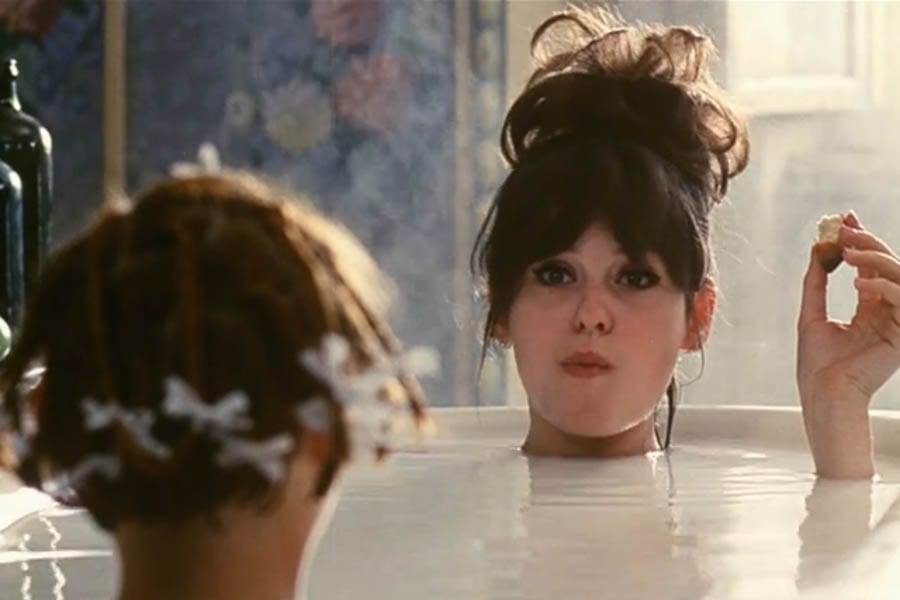 In Daisies, I can see the foundation for a lot of the best British comedy acts such as Reeves and Mortimer and The Mighty Boosh. I can also see the influence it must have had on the performance artists Gilbert and George. In fact, I believe that Chytilová‘s film would be most comfortable on display in a gallery. She finds that perfect point between art and entertainment that produces some of my favourite films and TV. The combination of a complementary, comedic duo with surreal backdrops and situations has proven to be a successful blueprint over the years.

Daisies is considered to be the most acclaimed Czech film ever made and has won numerous awards, despite being pulled from theatres at the time of its release by authorities for “depicting the wanton.” It’s considered a milestone in the New Wave movement and one of the great works of feminist cinema. Chytilová harnesses the same spirit as Dziga Vertov’s Man with a Movie Camera, the hugely influential Soviet film that shares its sporadic nature. It’s surprising how little attention and coverage these films have received but what little they have is always glowing. Bong Joon Ho’s comment after his recent success at the Oscars with Parasite was:

“Once you overcome the one-inch tall barrier of subtitles, you will be introduced to so many more amazing films.”

Daisies is exactly the kind of film he was talking about and everyone should see it. This is supported by the fact it was included in Steven Schneider’s “1001 Movies You Must See Before You Die” and that it’s at the top of lists of the best films ever created by female Directors. 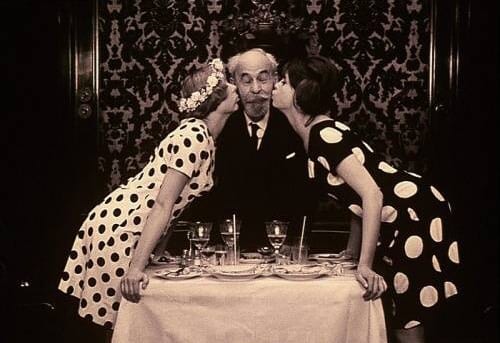