Pan’s Labyrinth, the potent, adult fairytale from Guillermo Del Toro, is one of the most affecting films I’ve seen. There’s something about its juxtaposition of grandiose fantasy and harrowing reality that has a profound impact. It’s a strong technique that has been utilised in other films before, where a writer/director combines extreme opposites to accentuate the narrative, with comedy and tragedy being the most encompassing ones. All fairytales have a combination of fantasy and reality to varying degrees, but Del Toro’s masterpiece is unique in its modern, grim setting.

The story’s set five years after the Spanish Civil War in ‘44, during the early fascist Francoist period. Our protagonist, Ofelia (Ivana Baquero), has become entangled with the Falangist Captain Vidal (Sergi Lopez), a leader of this dictatorship. It seems her mother Carmela (Ariadna Gil) has extremely poor judgment when it comes to husbands, as she has been impregnated by the Captain, and they’re moving to live with him at a military outpost. It’s frustrating that both of them are in this situation in the first place, but we can’t begrudge her mother too much, as it’s clearly a very different and trying time. Vidal is busy trying to quash a band of Republican rebels who are hiding in the forest near their new, rural home.

This is the first element of Ofelia’s bleak life: hopelessness. I’m sure we can all relate, when at some point in our childhoods we’ve felt trapped in a situation that we have no control over, due to our parent’s decisions. Ofelia’s predicament is much worse than most, though, both in a personal and political way. It feels like it’s no coincidence that she encounters her first fantastical creature in the form of a fairy, when she’s nearing her new home with this tyrant. Three of these fairies become her guides throughout her quest and first lead her to the eponymous labyrinth. 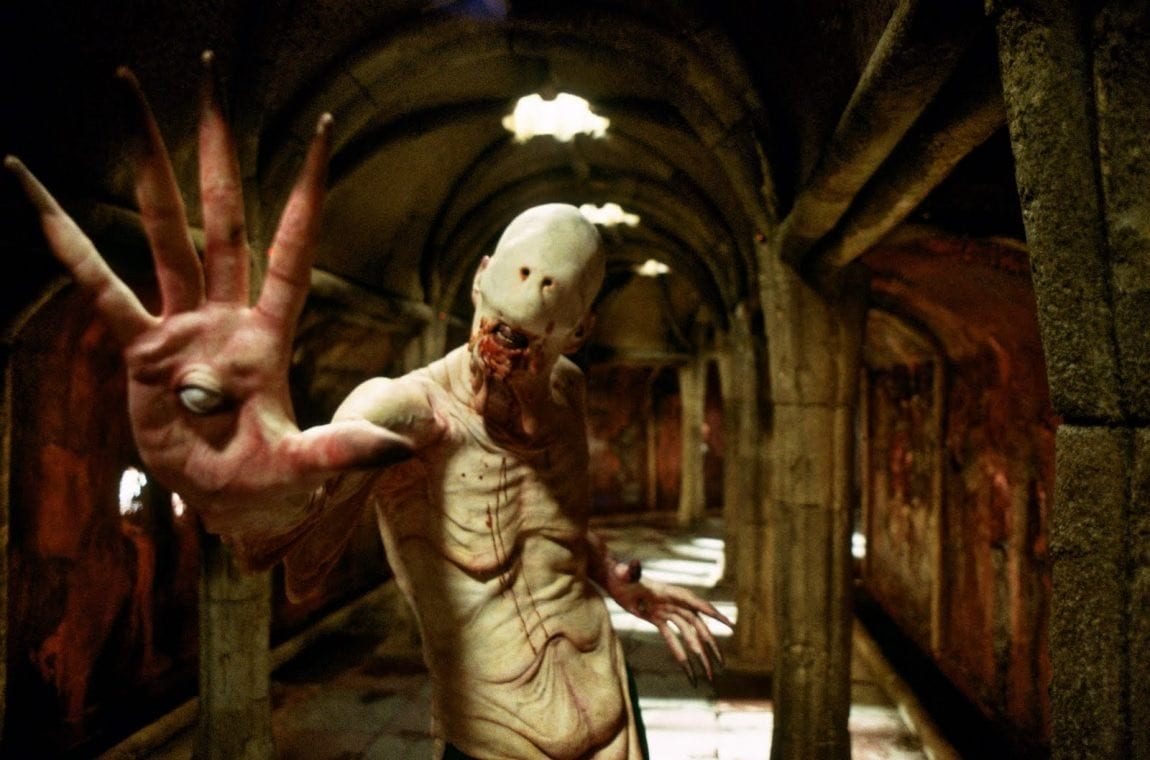 It’s at the centre of the maze that she finds a Faun (Doug Jones), who believes she’s the reincarnation of a lost Princess from the underworld. There are many labyrinths that were built around the world in preparation for her return that act as portals, and this is the last remaining one. However, to prove her essence is still intact and not become mortal, she will have to complete three tasks. The first is to retrieve a key from a giant toad who lives under an old, large tree. Ofelia manages this, but at the cost of the dress that her mother just made for her. She had removed it and hung it on a branch before crawling into the muddy roots underneath, but the harsh weather managed to ruin it anyway. What happens in the fairytale part of Ofelia’s life seems to have consequences that mirror her real life.

Her second task is to enter the lair of The Pale Man (also Jones) and use the key to retrieve a special dagger. She does this using a piece of magic chalk she can draw doors with, given to her by the Faun. The Pale Man is a grotesque monster who eats children and whose eyes are in his palms. This is where Del Toro films shine; due to his history as an SFX artist, he veers away from CGI and relies on complex makeup and animatronics from the team of David Martí, Montse Ribé, and Xavi Bastida. This is how he brings these fearsomely beautiful creatures to life in the most realistic way possible, to horrific effect for The Pale Man and to fantastic effect in the case of the show-stealing Faun. They reconnect us to feelings of primal horror we felt when watching the edgier films of our childhoods. Both are played to perfection by Jones, Del Toro’s longtime collaborator and creature-playing veteran.

Despite being warned not to touch the feast laid out before the dormant Pale Man, Ofelia ignores the efforts of the fairies trying to stop her and awakens him. She very narrowly escapes his grasp, but at the cost of him devouring two of her fairy guides. When the Faun discovers what she’s done, he’s furious, says she cannot return to their kingdom, and abandons Ofelia to her harsh reality. In a reactionary way, this is when her situation goes from bad to worse. Her mother dies during a complicated birth, and Vidal discovers that people working in his home are supporting the resistance in the forest. 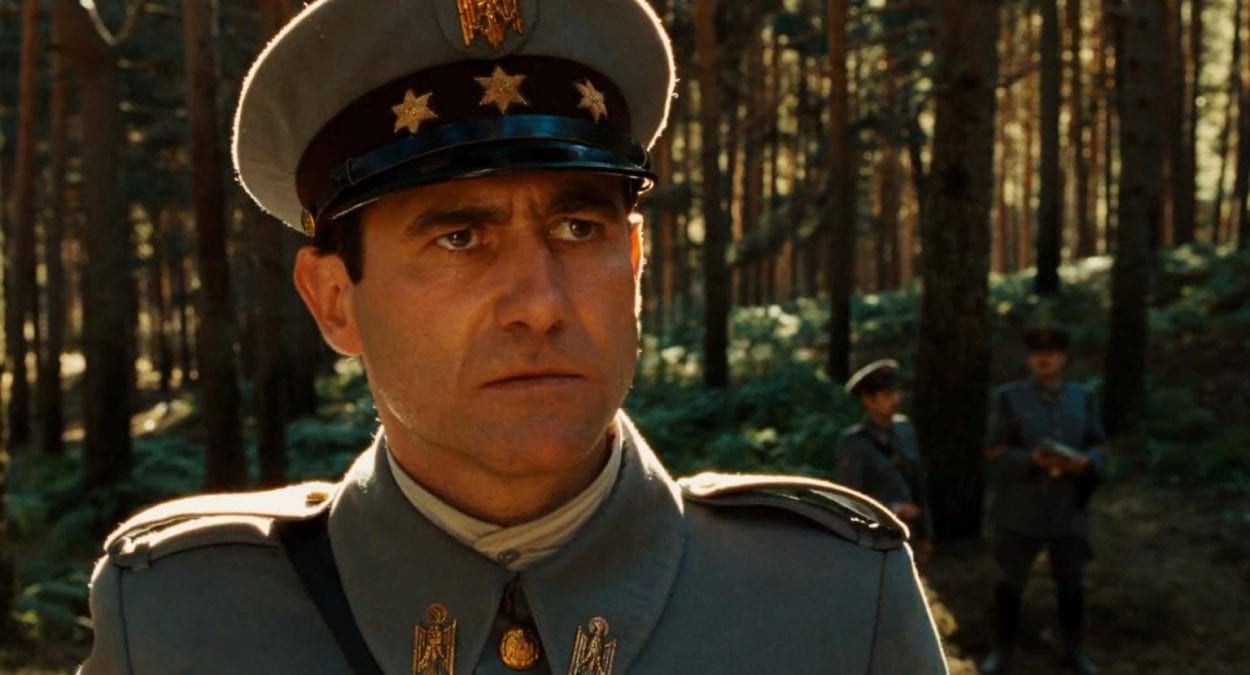 He murders a doctor in his employ for aiding them, as well as brutally killing some innocent farmers whom he wrongly suspected of the same thing. Vidal has become desperate and angry after the rebels raid the outpost. This comes to a head when Ofelia’s friend and protector, Mercedes (Maribel Verdu), is discovered. She has a brother in the rebels and has been leaking information and supplies to them. Mercedes manages to stab Vidal multiple times and escape, leaving Ofelia at his mercy. It’s at this critical point that the Faun decides to return to her, and she’s relieved beyond measure. He tells her the final task is to bring her new half-brother to the portal at the centre of the labyrinth, which she does with Vidal in hot pursuit.

The timing of events is important in this narrative, as it adds to the ambiguity of whether the fantasy parts of Ofelia’s story are actually real. This also brings the subject of faith and a religious component to the events that have occurred. Are the fairytale creatures responding to the tragedy in Ofelia’s life, or are they all in her head, an extreme coping mechanism for the horrors that she’s having to endure at such a young age? This was something I didn’t consider on first viewing but something that was brought up after showing the film to others, and in retrospect, I can see that interpretation. I guess I must be optimistic when it comes to this story, as the alternative is bleak, even by my high standards.

When Ofelia arrives at the portal, the Faun says they need a few drops of blood from an innocent to enter the underworld, and he must cut the baby with the aforementioned dagger to get it. She refuses to let him harm her half-brother, and this is when Vidal catches up and finds the centre of the maze. He sees Ofelia talking to the Faun, which he cannot see himself. He takes his son back and guns her down, but when Vidal leaves the labyrinth, the rebels are waiting and promptly execute him. Mercedes finds Ofelia lying motionless and comforts her as she passes away. Blood from her wound drips down into the portal, onto an altar, completing her third and most important task by giving her own blood instead.

We then see Ofelia in beautiful attire and unharmed, as a Princess being reunited with her royal parents. She stands in the golden throne room of the underground kingdom, offset against the blue tone of the rest of the film, and all seems joyous. However, we return to a dark, cold shot of Mercedes crying and softly humming a lullaby to Ofelia’s corpse, and we’re left to wonder if that was just a dream. I’d very much like it to be real, but that may be wishful thinking. At this point, I must mention the beautifully haunting score from composer Javier Navarrete, which he constructed entirely around this lullaby, and which makes the final moment of the film so powerful.

The influences of the film are clear. It’s been described as Alice in Wonderland (which has always been my favourite Disney movie) for adults and has been compared to another film close to my heart, Hayao Miyazaki’s Spirited Away. Del Toro was also approached to helm the Chronicles of Narnia series around the same time but opted to make Pan’s Labyrinth instead. This decision in itself demonstrates Del Toro’s desire to create his own vision and make his projects personal, this perhaps being most apparent in this film.

He was careful to stay true to the roots of the story by making this a Spanish-language film, shot on location in central Spain. He even went as far as personally overseeing the subtitle translations, as he was displeased with the ones that were done for his earlier film The Devil’s Backbone, to which Pan’s Labyrinth is a spiritual sequel. It’s this careful eye for detail in all aspects of the film that makes it so compelling in all its elements. It was a commercial and critical smash hit, earning numerous accolades and a Metacritic score of 98/100, one of the highest in history. It was also in the Top 10 films of the year lists for 2006 in all of the major publications and was right at the top of most of them.

Pan’s Labyrinth harnesses the innocence and wonder of childhood and presents it in a story where it’s needed most. We’ve all felt alienated and lonely at some point in our lives, and overall, this film is an allegory for those feelings. We all need escapism from time to time, especially in the coronavirus pandemic the world finds itself in at the moment. A child’s imagination is an incredible thing, and this film reminds us how easily we used to be able to entertain ourselves with it, just wandering around in nature. We need it to remind ourselves that we’re all special and unique in our own way, perhaps even more so as adults, which is why this film is so important. 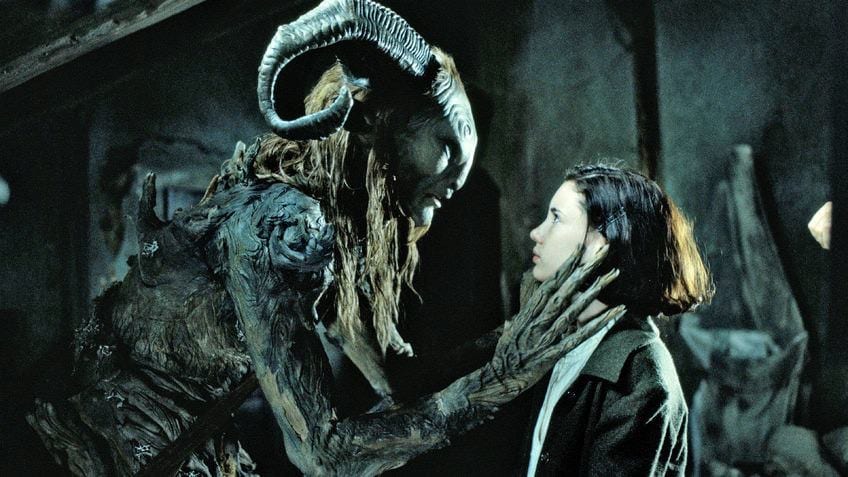