Director/Writer/Composer John Carpenter is known as a minimalist. His stories usually involve the most basic of concepts: a man of pure evil hunts down those that are good; a treacherous fog invades a town; a possessed car runs down its victims, etc. It is Carpenter’s dedication to atmosphere that gives these straightforward stories a special touch, adding dread to more mundane environments like a suburban neighborhood or a city street. For Carpenter, simplicity does not equal boredom; it is an opportunity to strike fear at the core of our basic existence.

But 25 years ago, Carpenter delved outside his traditional storytelling comfort zone and went intentionally cerebral, giving us In the Mouth of Madness. This hidden masterpiece (it reportedly broke even or lost money at the box office) was misunderstood by critics (a barely rotten 59% on Rotten Tomatoes) but it provided a prophetically damning look at the 21st-century creative process of fiction and the fan culture behind it. Little did Carpenter know (or did he?) that a 2020 viewer of his film would see so much of the viral fan community on display in pre-internet 1995. 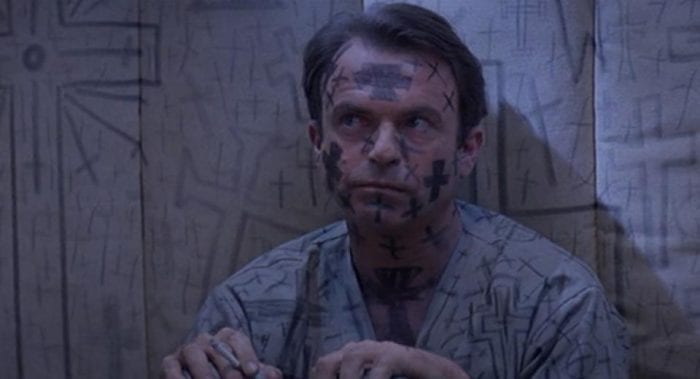 In the Mouth of Madness tells the story of recently committed insurance fraud investigator John Trent (Sam Neill) who, before getting thrown into the psychiatric ward, had one of the biggest cases of his career in the disappearance of celebrity author Sutter Cane (Jürgen Prochnow). Trent tells his story to an investigating doctor (David Warner) from inside his padded cell, presumably protected by the black crosses he’s put up in black crayon all over the walls, ceilings, and over his own clothes and face. Cane was bigger than Stephen King, selling horror books by the literal billions and seeing his work translated into every language on Earth. But his sudden disappearance worried his publisher Jackson Harglow (Charlton Heston) and editor Linda Styles (Julie Carmen), hence the hiring of Trent.

Trent’s journey took him into the fascinating culture of Cane himself, a world where his fans read his books ferociously and even fought in long lines when the recent new releases weren’t available. Rumors had it that Cane’s text had a psychological effect on the reader, morphing their minds and even changing them physiologically. Trent, a man who knew a con when he saw one from years of experience, sees the disappearance of Cane and the media coverage as an elaborate publicity stunt… until he started reading the books and began living the events in the pages themselves.

Before Trent knew it, he was visiting the presumably fictional town of Hobb’s End in search of Cane and the mysterious manuscript for Cane’s latest book In the Mouth of Madness, one that, according to the few who had read snippets, would not only be a best seller but would bring about the end of the world. What Trent saw in Hobb’s End not only tested his faith in the realms of reality but questioned his own sanity to the point that he even wondered if he was fictional himself. But as he sits in his presumably safe padded cell, is he truly safe? Is he truly real? Or is he all a figment of Sutter Cane’s imagination?

A reality is just what we tell each other it is. Sane and insane could easily switch places if the insane were to become the majority.

I won’t spend much time raving about the film side of things. Like all Carpenter films, the technical aspects of In the Mouth of Madness are pristine. Utilizing wide-angle lenses whenever possible, Carpenter’s sense of scale is especially important in a tale that involves Cthulu-like realms of impossible-to-describe abysses and landscapes. Carpenter, with the help of cinematographer Gary B. Kibbe, leaves a lot to the imagination, allowing shadow, darkness, and tricks of the light to let the mind’s eye see more than the human one.

But what really caught me on my most recent viewing of the film was Carpenter’s take on the creative process—on how someone who masters an intellectual property can, in some ways, become a slave to it. And that slavery is run by that intellectual property’s masters: the fans. In the Mouth of Madness pulls no punches with fan culture, unintentionally predicting what has become of that culture in today’s age of Twitter and Reddit.

The film shows Sutter Cane loyalists as physically deformed zombies with manipulated eyes that bleed when reading the material. And it is these zombies’ desire to turn those who aren’t readers into true believers, or else, that drives them. The film depicts riots and “epidemics” of madness when bookstores run out of Cane’s work. And for those who won’t read, there is always the movie that will bring in a new audience.

On the opposite end of things, Cane is manipulated by the “Old Ones,” a Lovecraftian idea of the Cthulu mythos. Ancient creatures from an unknown realm are basically forging their stories into his brain and bestowing the words with such power that they affect human consciousness. Though played for horrific effect in the Lovecraftian tradition in the film, one can’t help but see the slave/slave-handler relationship of creating intellectual property.

Despite whatever Carpenter has done or will continue to do, for example, he will always have the specter of Michael Myers chasing him and, in turn, he will have Myer’s fans, in many different subsections and categories, chasing him as well. Carpenter will always be the creator of Halloween and Michael Myers and, regardless of who takes over the franchise or redoes the character, the roots always connect to him. It seems like something he’ll never escape from. Something he can be proud of? Absolutely. But something that he can forever be held by, both by whatever creative forces brought him to that concept in the first place and the rabid fans that believe in it? Yes. 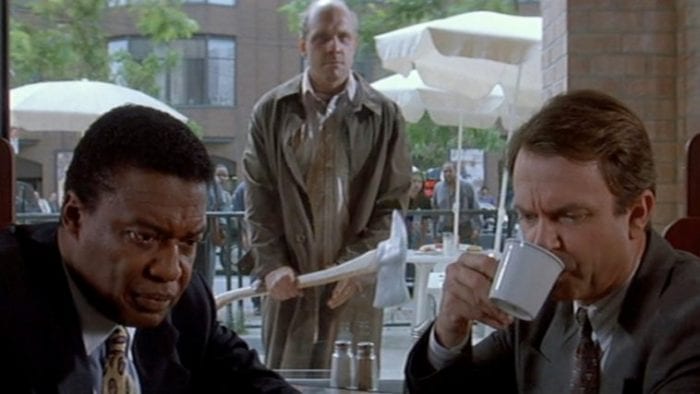 Religion seeks discipline through fear yet doesn’t understand the true nature of creation. No one’s ever believed it enough to make it real.

In the Sutter Cane quote above, what is real is in the eye of the beholder and in this era of fan service, where entire movies are shelved or restructured based on fan opinions or overreactions, reality itself is tampered with. A fictional character’s moral stance, like, say, Captain Marvel’s or Sarah Conner’s, is now taken as a flesh and blood director’s or a movie studio’s moral stance as well. There is a blending of the intellectual property and the reality it finds itself in. The story is no longer a story but, in the eyes of the followers, a mere merging of reality itself into a fantastical element. One needs only dip one toe into the Star Wars commentary pool to see what I mean.

In the Mouth of Madness saw all of this coming and neatly buried it within a well-produced Cthulu-like mystery of the mind that took one man tumbling from one reality to another. Though not likely its major ambition, In the Mouth of Madness prophetically served as an allegory for today’s fan culture and a representation of the staggeringly positive but potentially sinister process of creativity. 25 years later, it still packs a punch on a cerebral level.