People will make out it is kind of revolutionary when it happens now, but during the early ‘90s there was an effort to push a certain level of social consciousness into genre cinema. You could see it in Wes Craven’s The People Under the Stairs (1991) and it was present in the glorious Candyman (1992). The year after these two, in 1993, something else came along that perhaps had a chance at really making a point on how the underclass were being consistently ignored. Whether it made that point successfully or not is open to debate, but it’s possible Judgment Night was just too mainstream to ever really deal with serious issues head-on, and at the same time perhaps too raw for the blockbuster crowd.

The original script by Kevin Jarre actually dated back to 1989 and was by all accounts a much darker and in-your-face affair. The screenplay did the Hollywood rounds and was rewritten extensively, with even John Carpenter being involved at one point, and the eventual final credit being given to Lewis Colick. The actual pitch of “Deliverance in the city” is a strong one, and the kind of thing which leads to indie breakout success these days. Back in 1993 however, the world wasn’t quite ready. This was a year before Pulp Fiction (1994) would change cinema forever, and so Judgment Night ended up a box office disappointment with barely 12 million at the box office, straight-to-video status in many countries, and a shooting controversy at a theatre in New York which further hurt its reputation. 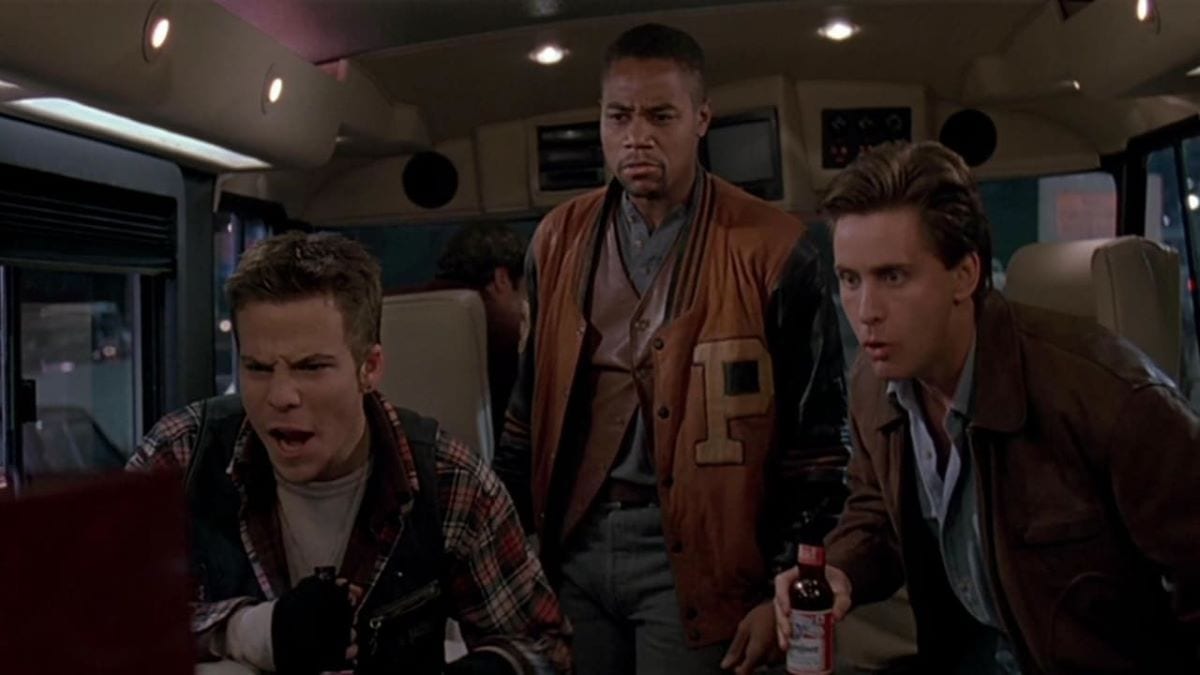 We start off with Frank (Emilio Estevez) being picked up from middle-class suburbia by his childhood friends Mike (Cuba Gooding JR) and Ray (Jeremy Piven) and his little brother John (Stephen Dorff) with the intention of a night spent cutting loose at a boxing match. Due to Chicago traffic, Ray’s RV ends up late for the fight, and Ray takes a diversion off the freeway and into the darker areas of the city. Down here the RV accidentally hits someone who seems to have been shot, and the four friends subsequently witness a murder carried out by local mobster Fallon (Denis Leary). They are then forced to flee for their lives through a neighbourhood that they had previously pretended didn’t exist, and where the cops don’t even bother to show up.

To be honest there are big red flags straight away with Judgment Night. The title for one is kind of goofy, and feels like its cashing in on an unrelated hit with a certain cyborg from 1991. Eliminating the word “night” from the title would have made all the difference. Second, this has some of the worst dialogue of the early ‘90s, and is perhaps the consequence of endless rewrites which watered the original script down. Lewis Colick was also the writer behind the woeful Adam Sandler / Damon Wayans action vehicle Bulletproof (1996) a few years later so that says it all really. As a result—perhaps intentionally in a way—many of the middle-class heroes in the film we are supposed to care about we actually…kind of dislike. Thankfully Emilio Estevez has always been likeable even when playing a douchey jock so here, him and Stephen Dorff keep us on-side as people who we actually want to see make it and who show the requisite vulnerability when needed.

Having said all that, I actually think that Judgment Night is a great film. Now let me explain why.
Judgment Night in 1993 was doing things that your action thriller just did not do; it wouldn’t be until the following year with Speed (1994) that action films came on to its particular wavelength in terms of how to create tension. The action movie in the early ‘90s was still dominated by your muscle bound, square jawed hero mowing down legions of bad guys with a machine gun. There was only really Bruce Willis making a case for the schlubby dude, but by 1993 Willis’ career was in serious trouble after some big flops. Judgment Night was released one week after Sylvester Stallone’s Demolition Man, and four months after Stallone’s previous big hit Cliffhanger. Both of these films were solid hits, and though Arnold Schwarzenegger had faltered with Last Action Hero the same year, it was still very much the age of big muscles and bigger paydays.

I ended up seeing Judgment Night on video a few months before the release of Speed in 1994 and it brought something great into my life that was missing after years of Van Damme, Seagal and Schwarzenegger slap about vehicles: tension. Bad dialogue aside, bringing in a quartet of normal looking actors to play the middle-class suburbanites was a masterstroke and felt like a revolutionary act back in 1993. If a film has a huge star above the title then you can bet good money safely that the star will survive the story at hand. Due to the casting here, automatically all bets are off, and this was a very strange sensation way back then where Hollywood generally still relied on star power over brand recognition.

Director Stephen Hopkins had previously made the loud and much-derided sequels A Nightmare on Elm Street 5 in 1989 and Predator 2 in 1990. Subtlety is not necessarily his strong point, but he does have a certain skill with actors. Stephen Dorff and Cuba Gooding Jr have some real moments here where the accumulated trauma is showing on their faces as they have to admit they are scared and all middle-class bravado evaporates. Denis Leary excels as the villain, doing a riff on his standup persona that action movies and MTV seemed to love him for. The film also introduced the world to Jeremy Piven who would later corner the market on alpha male reduction into sweaty mania, and that all started here.

The set pieces are frankly terrific: a climb over high rise ladders between buildings is a stand out as is the resulting confrontation, and a brief run about in the sewers doesn’t end the way you think it might. Much of the film plays out like a nightmare; a scene where our heroes hide in a train car full of disturbed homeless people as the villains stalk them outside is truly a scene where you place yourself in their shoes and wonder what you would do. I often catch myself holding my breath during these scenes, and it’s a testament to Hopkins’ direction and the editing that these scenes absolutely work in a way that few did back then.

A year later the action movie changed forever and began its slow dissipation. After Speed turned Keanu Reeves into an action hero, everyone was at it: Johnny Depp, Christian Slater, Nicolas Cage, all the young bucks had a go in the end. The era of the muscular, invincible hero was done. Judgment Night was a transitionary movie that despite a gimmicky soundtrack and a certain amount of controversy, was just a year or so too soon and fell through the cracks. It is now a movie that still too few people know of and a reminder of the superior mid-budget thriller that Hollywood forgot how to make.