In 1946, Jean Cocteau made a film that became the first cinematic adaptation of Beauty and the Beast, a fairy tale originally written by Gabrielle-Suzanne de Villeneuve and popularized by Jeanne-Marie Leprince de Beaumont. Later, numerous other adaptations were made, but Cocteau’s poetic interpretation will always remain distinguished among them. I must admit here: Beauty and the Beast—or more precisely, a variation of it—was my favorite fairy tale as a child.

Beauty and the Beast is a fascinating tale about a kind, courageous, and selfless young woman whose self-sacrifice is rewarded in the end. This is how fairy tales usually end. But among other things, what makes this tale special is that its protagonist, Belle, is an active character who takes on responsibilities. They are not forced on her; Belle is not a mere victim of circumstances. She always has a choice and chooses not to hide away, but rather to take responsibility and follow her heart.

This tale also has a deeper, more intriguing layer, which became more obvious and interesting to me as a grew up. The film shows it perfectly. I’m talking about the protagonist’s relationships with male figures: a father who has financial problems, a brother and his friend, Avenant—a handsome and brave but also irresponsible young man, and the gentle but ugly and not-so-smart Beast. Avenant, the Beast, and Prince are all played by Jean Marais. Cocteau has his reasons for this—more about that later.

Belle (Josette Day) is the youngest and most beautiful of three sisters. She’s also a humble one, in contrast to her arrogant and envious sisters who hate Belle for her beauty and kindness. Belle understands that her father has material difficulties and does everything to help him without demanding anything in return. She is a giving person, even too much, if you ask me, and her sisters take advantage of that. Avenant, a young man whom Belle actually loves, asks her to marry him, but she rejects it. The reason? She cannot leave her father. So I would say she has a very strong bond with her father. 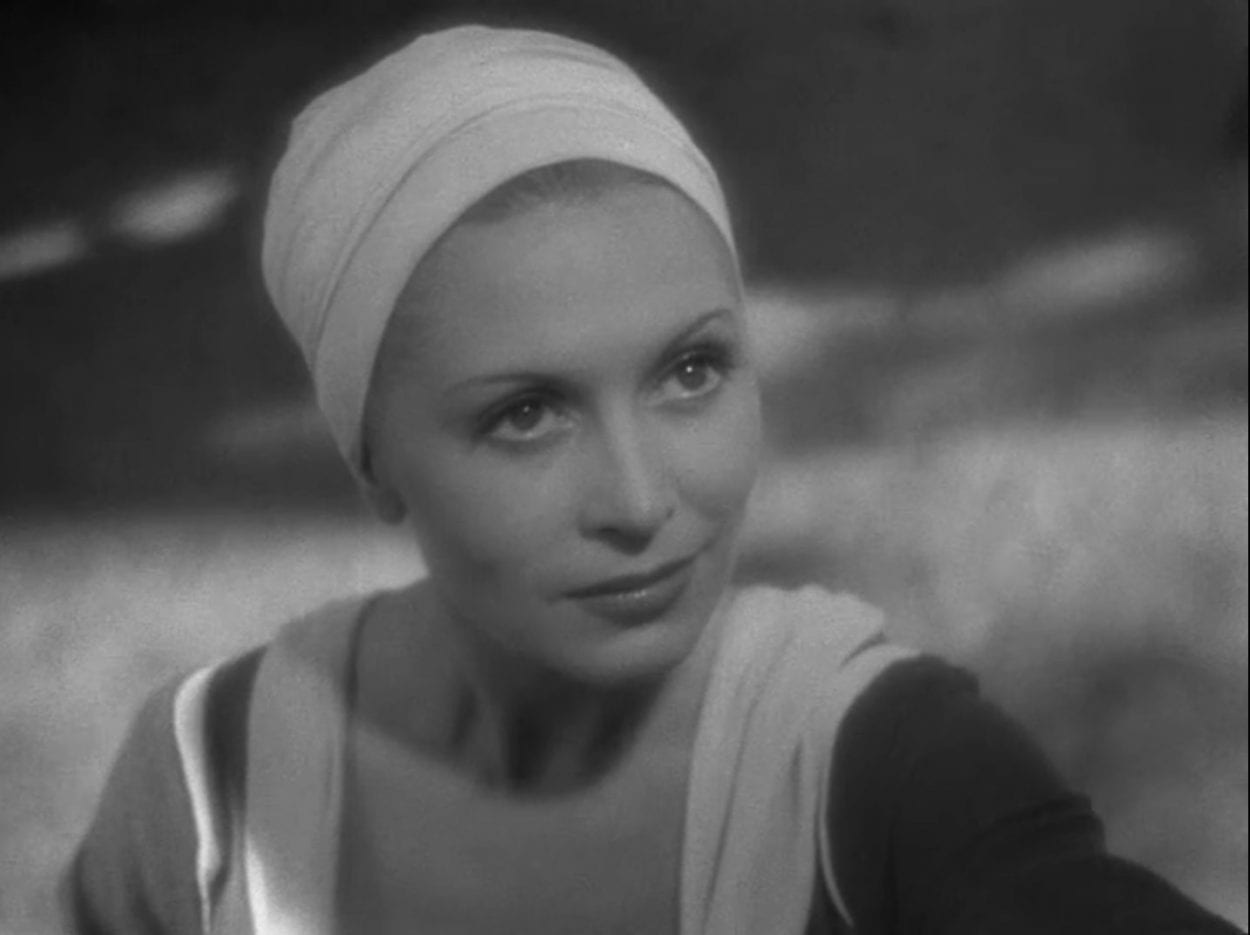 So it’s not surprising that their destinies become intertwined. Belle’s modest wish, asking her father to bring her a rose, gets him into trouble. For picking the rose in the Beast’s garden, he must die, unless one of his daughters agrees to change places with him. Of course, Belle takes responsibility, because it was her wish that got her father into trouble, and also because she wouldn’t be able to live knowing that her wish caused his death. So she goes to the Beast.

Belle arrives at the castle, which itself is like a living thing. Candelabras held by hands, moving statues, a speaking door—everything in and around the castle is magical. Common clothes of Belle magically change to a beautiful dress when passing through her bedroom doorway. Costumes in the film, as well as interiors, are worth special mention. They give the film its remarkable, captivating look. 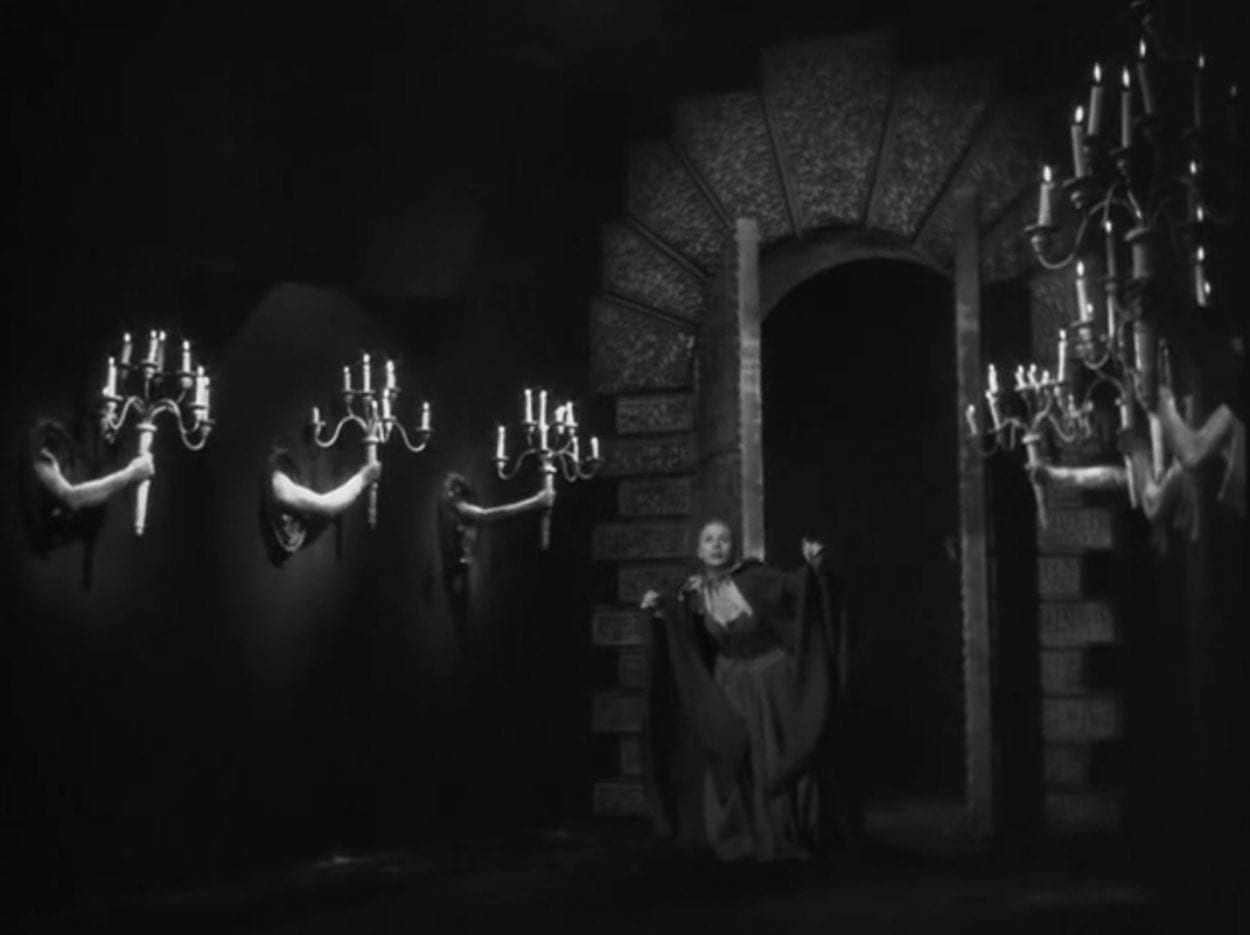 Starting from the first day of their meeting, both Belle and the Beast change. The Beast is enchanted by Belle’s beauty. He obeys her wishes and tells her that she is the master of the castle, though she still cannot leave. As the Beast doesn’t want to hurt her with his uncontrollable power, he comes to visit Belle only at her dinner time, when he is not dangerous.

The uncontrollability of the instincts and passions is evident in the scene where the Beast goes to Belle’s room with his hands smoking. Is it because he was hunting and slaying his prey, or is his passion toward Belle showing up? In another scene, the Beast has to control his predator’s instinct and not go after a deer. Because he doesn’t want Belle to see him as a predator, the Beast starts to feel ashamed. He is being influenced by Belle’s presence, her beauty, and her kind heart. Belle has an advantage over the Beast: she can teach and guide him toward human behavior. 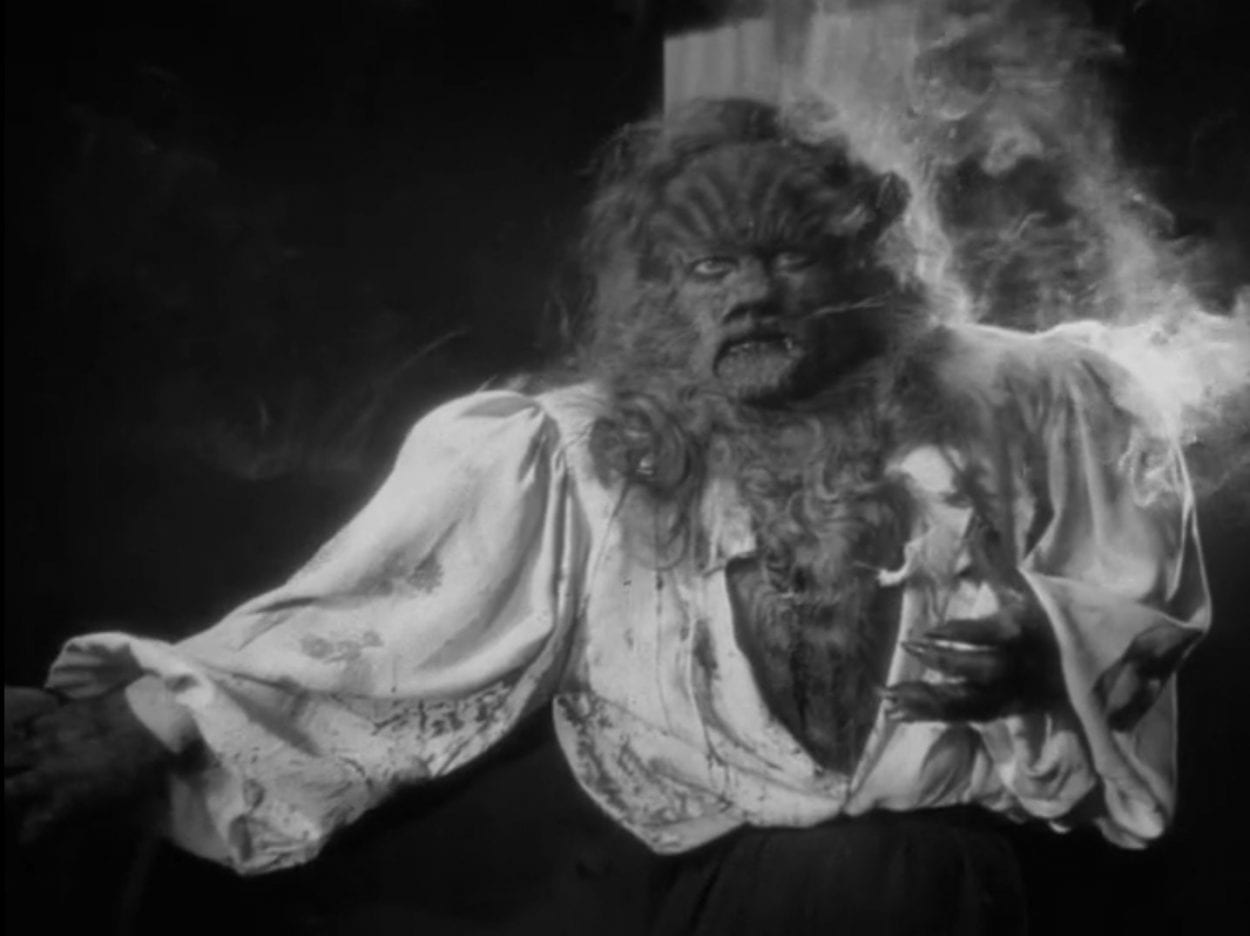 Belle is initially terrified of the Beast, but as she gets to know him, she recognizes his gentle heart and begins to see a friend in him, and she is not repulsed any more. So, if the Beast represents the realm of instincts, we can say that Belle starts accepting the wild, instinctual side of herself. However, to the question that the Beast asks her every time they meet—if will she marry him—her answer remains no.

There is another thing that changes for Belle. The magic of jewelry and clothes intended for Belle would work only on her. Even if she willingly gave them away, they would turn into rubbish—the castle’s magic makes sure of it. Belle needs to learn to keep some things for herself.

Everything in Beast’s castle is made by magic, except Diana’s Pavilion, where his true riches are kept. Nobody can enter there, including the Beast himself. In Cocteau’s interpretation of the tale, Diana is the one who turned the prince into the Beast. Diana is the Goddess of the moon and the hunt in Roman mythology. Statues of deers and hunting dogs in the park—the animals associated with Diana—suggest her presence. Even Beast’s glittering costume suggests her influence (well, I’m not sure whether it was intended like that, but I’d like to believe so). 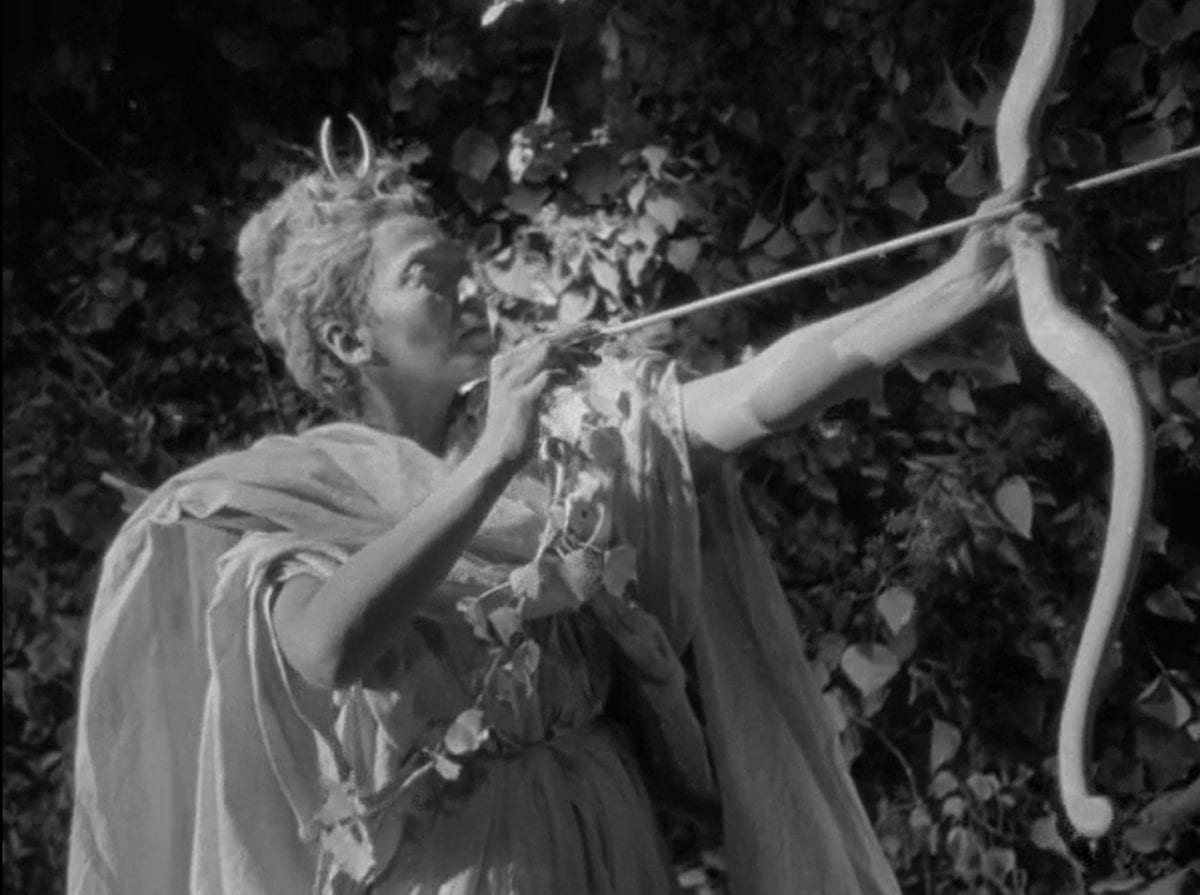 When the Beast lets Belle go to see her father, he gives her the golden key for the Pavilion as a sign of his trust. He also tells her that if she doesn’t return, the Beast will die of grief, but she will be free, and the riches will be hers. She has a choice: Beast’s life or freedom and riches. We know she will make the right choice.

Diana’s Pavillion, with its true riches, stands in the middle of the courtyard created by magic. Similarly, the Beast’s true virtues are hidden behind his gruesome appearance, which is also created by magic. It’s also interesting that even the Beast himself cannot enter the pavilion. Being the Beast, he has no access to his true riches.

When in the end, Belle returns and asks the Beast to fight for his life, he cannot deem it possible because he’s not human: “Poor beasts who would prove their love only know how to lie on the ground and die.” 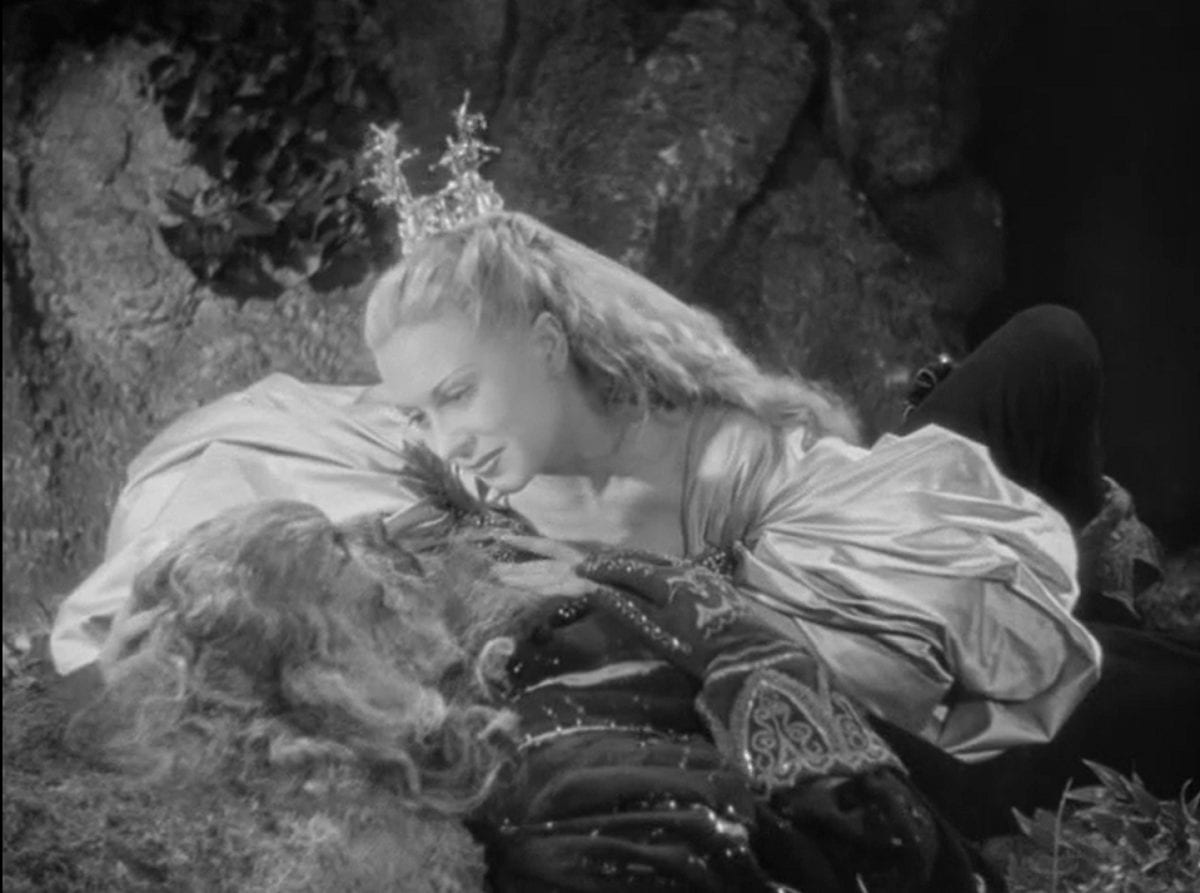 The Beast dies. At the same time, Avenant dies, struck by Diana’s arrow, because he entered the forbidden Pavilion. Dying Avenant takes the appearance of the Beast, and the Beast turns into Prince Ardent, who looks very much like Avenant—the same actor, as I said above. “Love can make a Beast of a man. It can also make an ugly man handsome.” explains the prince.

But here a question comes to mind: Is a handsome prince what a humble and kind girl needs for true happiness? Can a handsome prince be really considered as a reward for self-sacrifice? Belle is confused and even looks disappointed by the similarity between the prince and Avenant. After all, she chose the Beast with his gruesome appearance over handsome Avenant. But she still ended up with the man she had actually rejected. Well, at least Beast’s personality and kind heart are there.

“You are a strange girl,” says the prince, and to his question—would she be afraid of flying to his kingdom?—she replies, “I don’t mind being afraid… with you.” This is another strange line for a fairy-tale ending in which everything should be sweet and perfect. Does this mean that it’s not only a gentle heart that attracted Belle to the Beast, but also his animal instincts and passion? 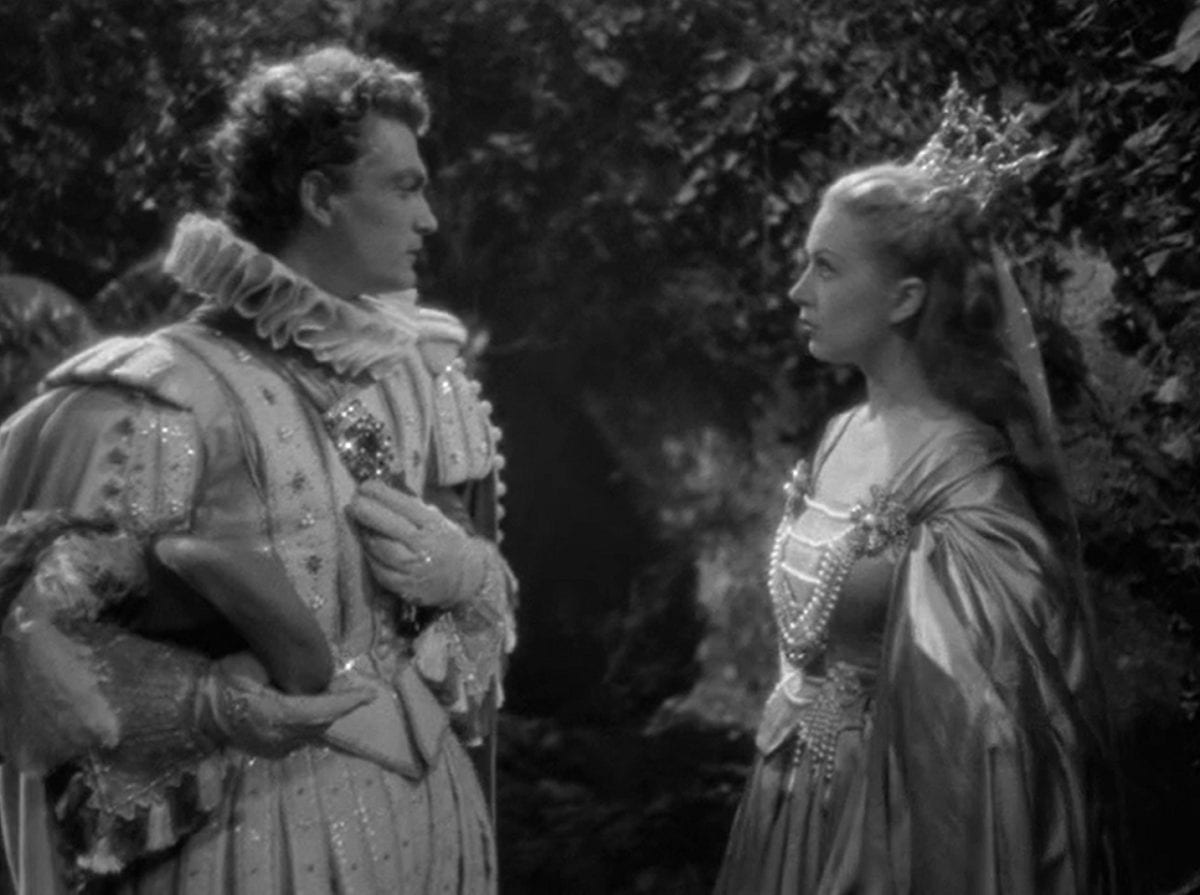 She’s a strange girl, indeed. Anyway, everything seems perfect—they fly away to the prince’s kingdom to be king and queen. Belle will be reunited with her father, and her sisters will carry the train of her dress.

In the end, Beauty and the Beast turns out to be a tale about a young woman who, through her honesty and kindness, helps the man that she loves to integrate opposites and finds hidden qualities in herself. And regardless of the appearance or status, who can say this is not the way to happiness?