Miles & Kilo is a fast-paced indie platformer with the visual style of an NES game. Miles and his dog Kilo embark on an adventure after their plane crashes. There are 5 worlds and 36 levels total. Each world features a boss with a missing piece from their plane. For most levels, you control Miles solo. Occasionally, Kilo joins the fun by pulling Miles from his leash (for someone who has walked a German Shepard that loves to pull on walks, this made me smile).

Miles & Kilo was developed by Michael Burns and published by Four Horses. It’s available on PS4, Switch, PC, mobile, and Vita. The levels are short and addictive, making Miles & Kilo perfect for the handheld platforms Vita and Switch. Vita was my platform of choice. While looking at the PSN profile owner numbers, this game appears to be a hidden gem.

This is your typical platformer. You jump on enemies, throw projectiles (fruit in this case), and collect coins. On Vita, the jump button is mapped to the circle button while attack and slide is the X button. This layout is almost as sinful as having B as jump on the NES. Thankfully you can change the button layout.

The goal is simple, complete each level without getting hit or falling into a pit. Memorize the patterns of the enemies and time your jumps just right. The distance of your jumps changes by how long you hold down jump. Lastly, defeat the bosses at the end of each world by hitting them 3 times. No long tutorials needed for this game. 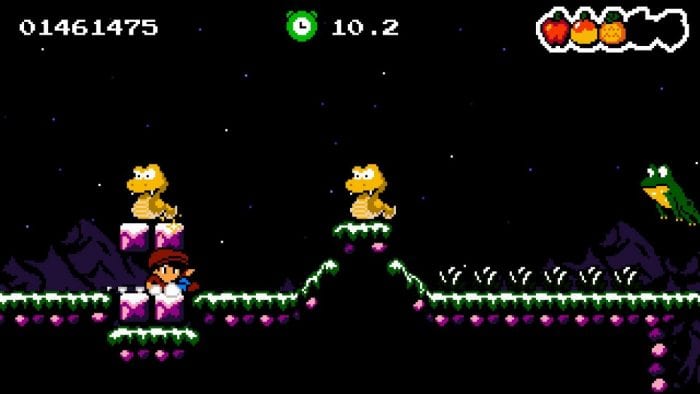 It is apparent early on that Miles & Kilo is hard. Not quite to the level of “NES hard” because in this case the controls and physics are rock solid. When you die, you can only blame yourself. Each level plays out like a speed run. You’re constantly on the run so one small mistake and you start the level over. The Kilo levels are auto run levels, which was a relief for my left thumb.

While certain levels can be frustrating, the developer offers options if you want to change the difficultly. For Miles levels, auto-run is optional, allowing you to take your time. After you inevitably die a few times on a hard level, the game offers a strawberry. The power-up functions the same way as a star in Mario except it lasts the entire level.

Miles & Kilo delivers with fun and diverse levels. Besides the Kilo levels, Miles gets to ride a surf board, jump off vines, and slide under blocks. The sliding feels just as satisfying as it does in a Mega Man game. 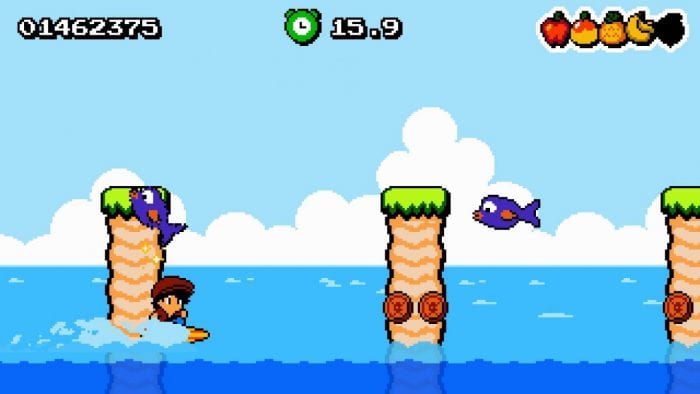 The visual style has hints of Adventure Island on the NES. Vibrant bright colors and mundane enemies like frogs, monkeys, and snakes. As a parent, it’s always refreshing to play a game that I can possibly share with my daughter. The 2D 8-bit style seems to never go out of style. If it isn’t broke, why fix it?

There never seems to be an in between in quality with sound design and music for indie games. It’s either great or lackluster. Miles & Kilo is the former. The music and sound effects call back to the simplistic 8-bit days, but with an updated take on the era. The driving music reminds of Mega Man. It doesn’t have stand out levels to the likes of Mega Man 2, but I wouldn’t mind listening to this soundtrack on loop.

Miles & Kilo is only $7.99 on digital stores. What are you waiting for? The game is only a few hours of playtime. For Playstation consoles, except for one particularly hard achievement, the trophies are fun to acquire if you want more bang for your buck. Times are tough right now. At the very least add this to your wishlist for future sales.