The current era of endless nostalgia porn we live in consistently gets a great many things wrong about the eras it feels so wistful about. I would say the worst offender for this is possibly Stranger Things, so much so that by about the second episode of Season 3, I felt done with the show because the nostalgia was making me sick. The common misconception seems to be that in the ‘80s we were surrounded by the fashions and the music, the toys, the cereals and all that 24-7. If you watch an episode of Stranger Things then you could be forgiven for thinking that Kajagoogoo and Duran Duran were literally piped in from the heavens, and everyone had a dodgy perm as we all lost ourselves in Day-Glo clothes whilst playing with Rubik’s cubes at roller discos. Realistically, I lived through the ‘80s, and living there was just high-waisted mom jeans and stone-washed denim with the occasional soap star beginning a pop career. It really wasn’t any better than the ‘90s, or even the ‘00s for that matter. Nostalgia sickness has always been with us, I mean look how reverential the media of the ‘80s was for the ‘50s.

One overlooked film that got the balance of nostalgia and genuine heart absolutely right was Greg Mottola’s Adventureland (2009). Based on Mottola’s personal experiences, Adventureland will strike a chord with anyone who feels nostalgic about that first part-time job as a teenager, no matter what era they lived through. 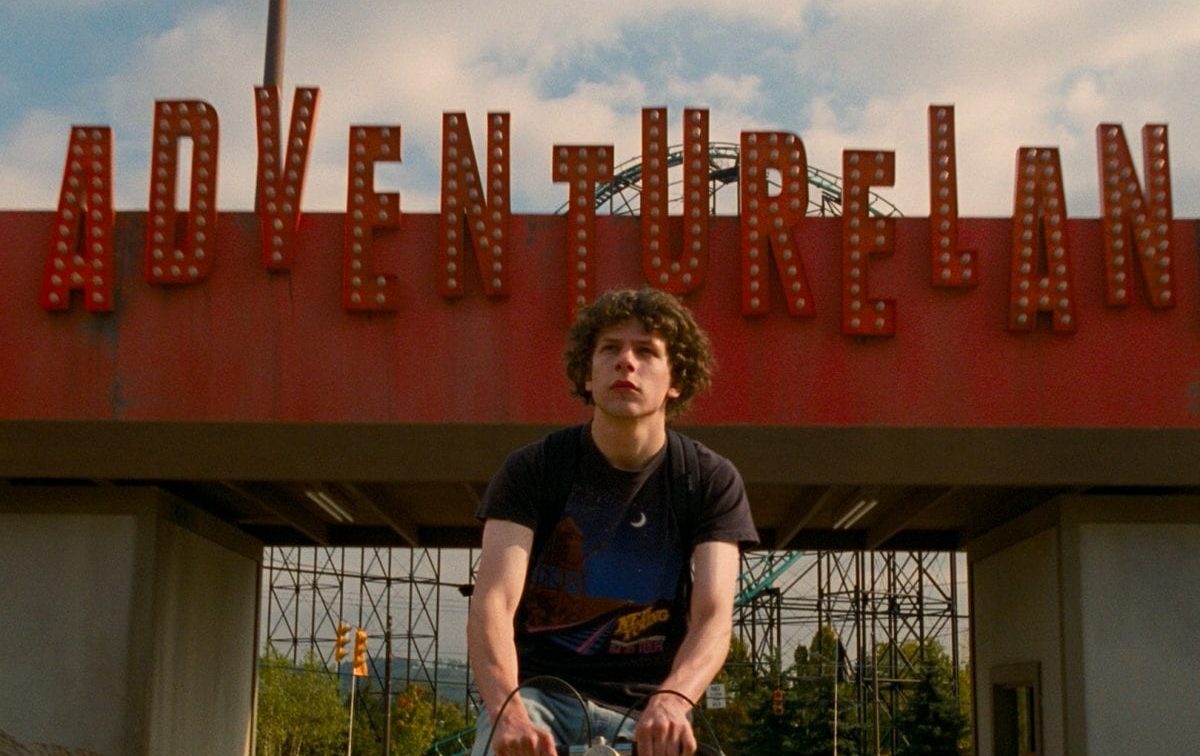 Thanks to a sudden change in his parent’s fortunes in 1987, James (Jesse Eisenberg) finds that he has to take a part-time job at the local cut-rate amusement park to make ends meet so he can attend college in New York that coming fall. Whilst at the park he encounters a menagerie of characters and relationships. He is besotted by the cool and aloof Em (Kristen Stewart) but she is having an affair with the older, married, and somewhat deluded musician Connell (Ryan Reynolds). His best pal and confidante at the park Joel (Martin Starr) is somewhat old before his time and lacks confidence. Then there is Lisa P, the girl everyone likes whom James is drawn to when he thinks Em is out of his league.

Adventureland is the best kind of personal movie in that it shows you characters we have all met along the journey and can identify with. James inevitably learns more about life during his few summer months of working than he would at an entire semester at college. Jesse Eisenberg here is less doing his teenage Woody Allen thing and plays more of an average kind of dude whom we can hang a perspective on as he navigates this pivotal time of his life. Between this and The Social Network (2010), Eisenberg became less annoying and more the go-to actor for flawed youngsters too intelligent for their own good.

The support is all played to perfection. There is the psychotic kid Frigo with ADD and a fondness for punching people where it hurts that brings to mind “that kid” everyone knew who was desperate for attention at gatherings. Ryan Reynolds plays a man who has lived through his late teens and twenties and now faces his thirties with the knowledge that he has not yet achieved his dream. Connell basically lies and exaggerates the truth to appear cooler than he is to these kids, and I think we have all known someone like that at one point or another, and yet Reynolds keeps him likable and somewhat sad. Then there is the reliable, and deadpan hilarious best friend character played by Martin Starr. Someone who just desperately needs to get out their own way so that everyone can see what James sees. Bill Hader and Kristen Wiig bring up the rear playing the management of the park and totally nail offbeat characters who are happy in their little rut. 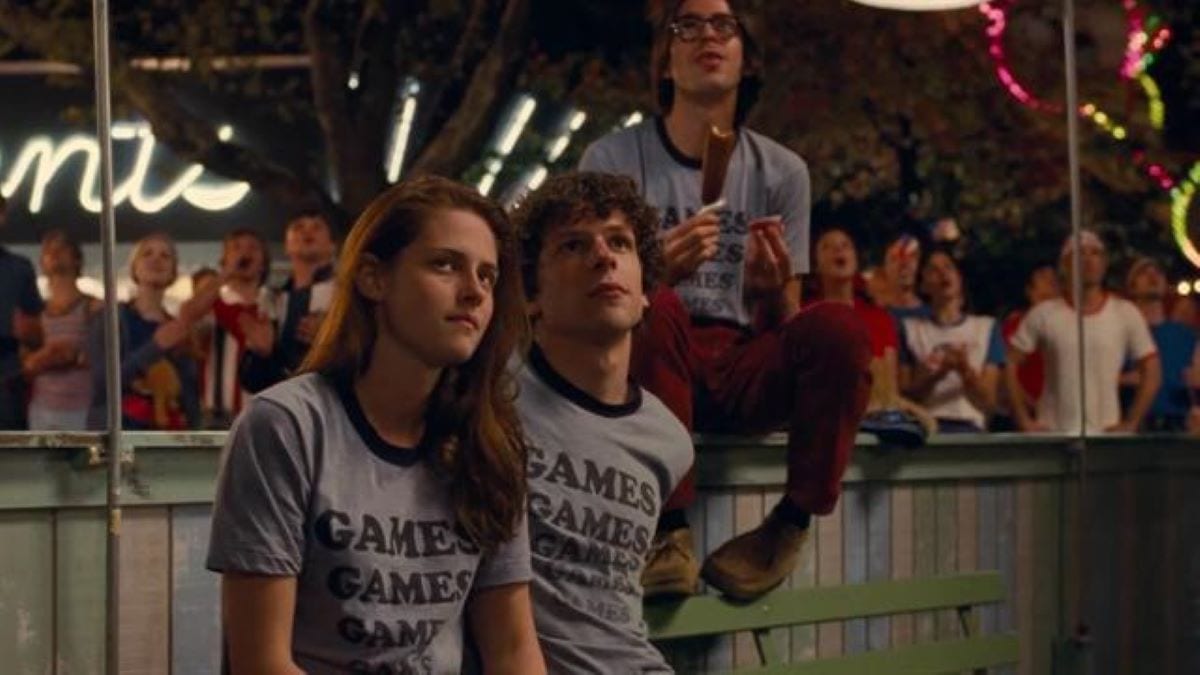 These flawed beings surround our main character as he journeys through the desperate boredom and then ends up accidentally having the best time of his life. The warmth with which Mottola sketches out these characters and their triumphs and occasional lows bring to mind the best work of Cameron Crowe (Almost Famous, 2000). Then there is the heartbreak of first love amongst these flawed people that Mottola brings out perfectly, with choice soundtrack cuts not necessarily of the era, but to bring home a point. Crowded House, INXS, Lou Reed and Falco are all used at pivotal moments and are not the biggest hits of the time, but bring a level of identification to keep it on the right side of nostalgia sickness.

After Superbad turned out to be one of the biggest comedy hits of the ’00s and was a damn great comedy, I expect that the pressure would have been on Mottola to repeat that film’s success and just keep churning them out with the likes of Seth Rogen, Jonah Hill, and James Franco. It would have been an easy win, and after Adventureland he did go back to straight comedy with varying degrees of success with Paul (2011) and Keeping up with the Joneses (2016). Adventureland only ended up making $17 million at the worldwide box office in 2009.

It is possible its actual target audience that would have keyed into its particular brand of nostalgia were all well into their thirties by that point—holding down actual careers—and so it largely passed them by. Millennials were not on board the Stranger Things train for another six years; it may well have come too early to really hit as it should have. It could have also sadly been the presence of Kristen Stewart who put people off going to see this. This was released during the height of Twilight fever and Stewart and Twilight co-star Robert Pattinson were two of the most divisive young actors out there, adored by the faithful and despised by the nerd. After the Twilight saga ended, they didn’t get taken seriously as performers until fairly recently. It’s a shame as Stewart has always been a dependable screen presence from Panic Room (2002) up through Into the Wild (2007) and didn’t deserve the extreme online hate that came her way.

Nostalgia is a tricky beast. For me it comes less from music and fashion (although these do spark memories) and more from feelings and relationships. If I meet someone who reminds me of someone from a particular era then the memories come back thick and fast. If I find myself in a workplace dynamic that is reminiscent of another, again I find myself thinking back. This is the key to Adventureland’s success, the fact that it relies on characters, situations, and good old-fashioned great writing to take you down memory lane and why it should be more well known and respected than it is.