In 1988, the fantastic work of art that is Elvira: Mistress of the Dark was unleashed upon the masses. On its face, the film is a campy, silly, raunchy, good-time comedy horror. Well, through and through, it is all of those things, but Elvira: Mistress of the Dark is also so much more. Elvira, our iconic main character, played by Cassandra Peterson, is forced out of her steady job when her creep of a boss sexually harasses her. When Elvira is at her lowest, she gets news that she has been named in the will of a distant relative. She packs up her convertible and heads for Fallwell, Massachusetts with hopes that her great-aunt Morgana has left her enough money to fund her Vegas dream show.

Not met with open arms in Fallwell, a tiny and conservative town, she starts immediately attracting negative attention. Elvira suffers a second blow when she finds that she isn’t left with a cash sum, but rather the derelict home of her great-aunt Morgana and a poodle named Algonquin. She has no choice but to stay and fix up the house if she ever wants to realize her Vegas dreams. Unfortunately for our leading lady, getting on with needed repairs is met with the ire of the citizens of her new town. She is judged on her provocative clothing, make-up, choice of music, car, and her sometimes abrasive personality. Elvira is picked apart by some and treated as an object by others. But even as this community rejects her, she continues. 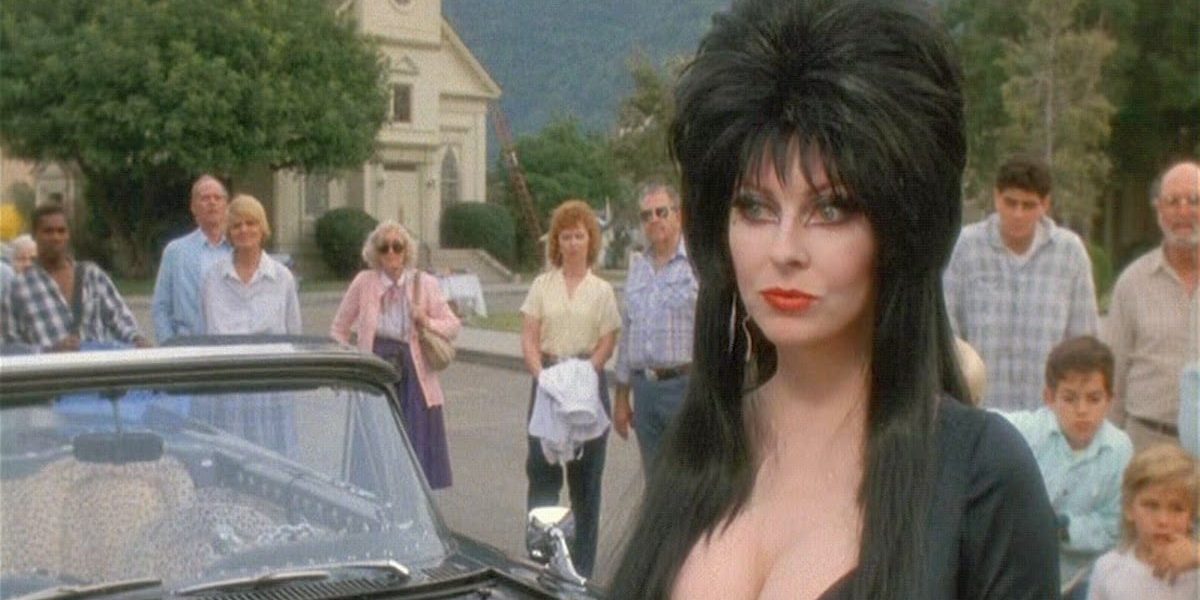 Elvira never gives up. The rudeness of her neighbors might hurt her, but all is not lost, as she is about to find out. She wakes up one morning to find a yard full of the town’s teenagers, ready to get to work and help her with her aunt’s house. The youth is her reprieve, her first actual moment of acceptance in this community where she so sorely stands out. The kids are interested in the things that make her different. They are welcoming of those differences and perhaps for the first time, realize that there is a life outside of their small community.

While Elvira is happy to have the support of her new friends, the parents of the kids are outraged and, of course, want Elvira out of their town. They swiftly forbid their children from having any contact with Elvira. Thankfully, teenagers tend to have a rebellious streak, and the town starts to change just a tiny bit as we later see the kids sneak out of the house to attend Elvira’s horror film fest. Soon Elvira finds a love interest in Bob (Daniel Greene), a rival to that love interest in Patty (Susan Kellermann), and another family member in her great-uncle Vincent (William Morgan Sheppard). 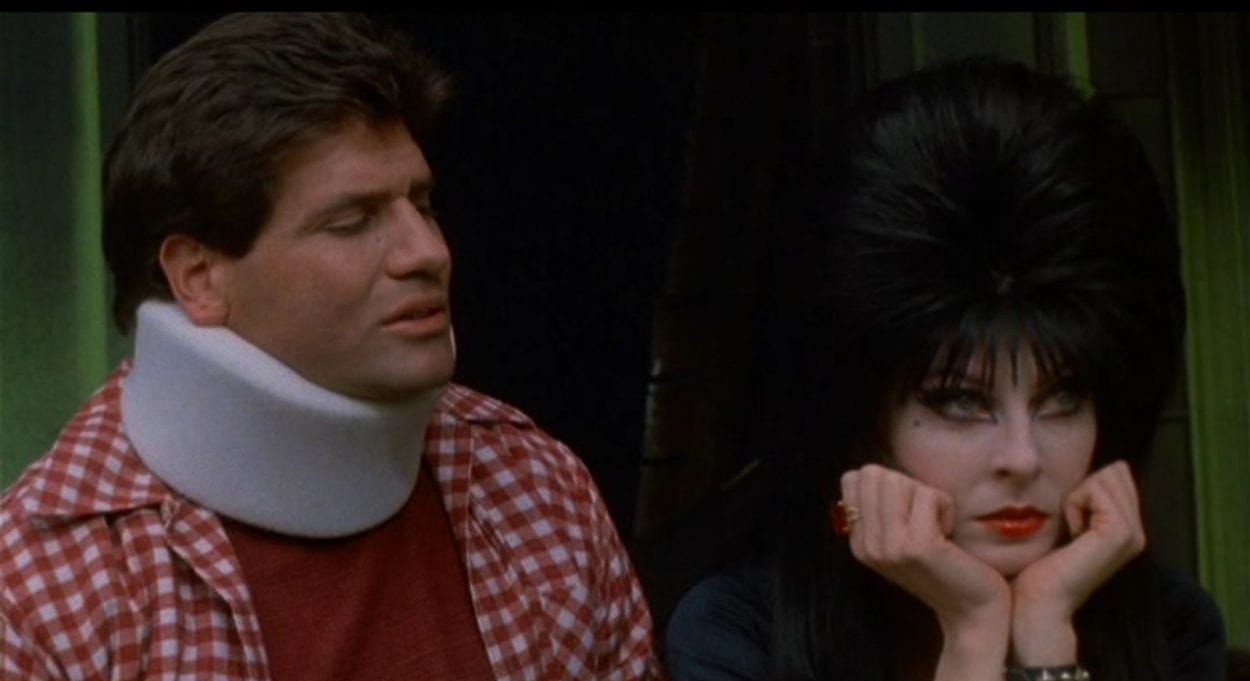 Vincent has less than innocent intentions and doesn’t care much for Elvira. Vincent goes to great lengths to get what he wants from Elvira, and family secrets are laid bare. As Elvira starts to dig through her new home, she finds some strange items, including a very eccentric (and important) cook-book. As she finds out more and more about her family and their history, her great-uncle gets nervous that she is learning too much. Vincent will stop at nothing to get his hands on that “cook-book,” including murder.

Without recapping the entire movie, the tense situation between Elvira and the townspeople, who are wholly under the control of her great-uncle Vincent, escalates. War breaks out between good and evil after Elvira is nearly burned at the stake. Everyone is finally able to see Vincent for the evil person he truly is, while also realizing how disgraceful their own behavior had been. Idyllic Fallwell turns into a hellscape as Vincent and Elvira battle each other once and for all.

So, what is under the laughs and camp of Elvira: Mistress of the Dark? A lesson on being true to yourself. Elvira never stops being herself, and she doesn’t change her make-up or clothing to try and fit in. She is not overly vengeful or mean-spirited in return, though she doesn’t allow herself to be pushed around, either. Elvira does play a prank on the community, but, honestly, who could blame her? While some growth occurs in Elvira throughout the movie, this growth doesn’t change who she is, who she has always been.

We also learn the importance of having a place, even if we don’t realize it. Elvira doesn’t seem to know much about her family, so the things that she finds out, as the movie progresses, are genuinely precious to her. All of a sudden, Elvira has a place in this world, she has ties, a family, and she knows she was loved. Presented as a tough chick from the city, we see her vulnerabilities here, and I think this makes Elvira so much more relatable as a character.

Elvira: Mistress of the Dark shows us several instances of just how delicate humanity can be, starting with the town that fears her and wants to persecute her before they even get to know her. They fear the change she represents so much that they literally try to burn her at the stake. It isn’t until Elvira can reveal her powers and defeat the actual darkness in town that the people of Fallwell apologize and ask her to stay. She even manages to get Patty on her side. The townspeople were never really “bad” people (I mean, they were terrible people, given that they tried to murder her, but that’s the fun of horror), they were scared people who didn’t want to change their way of life. They didn’t want to take the time to understand their differences. 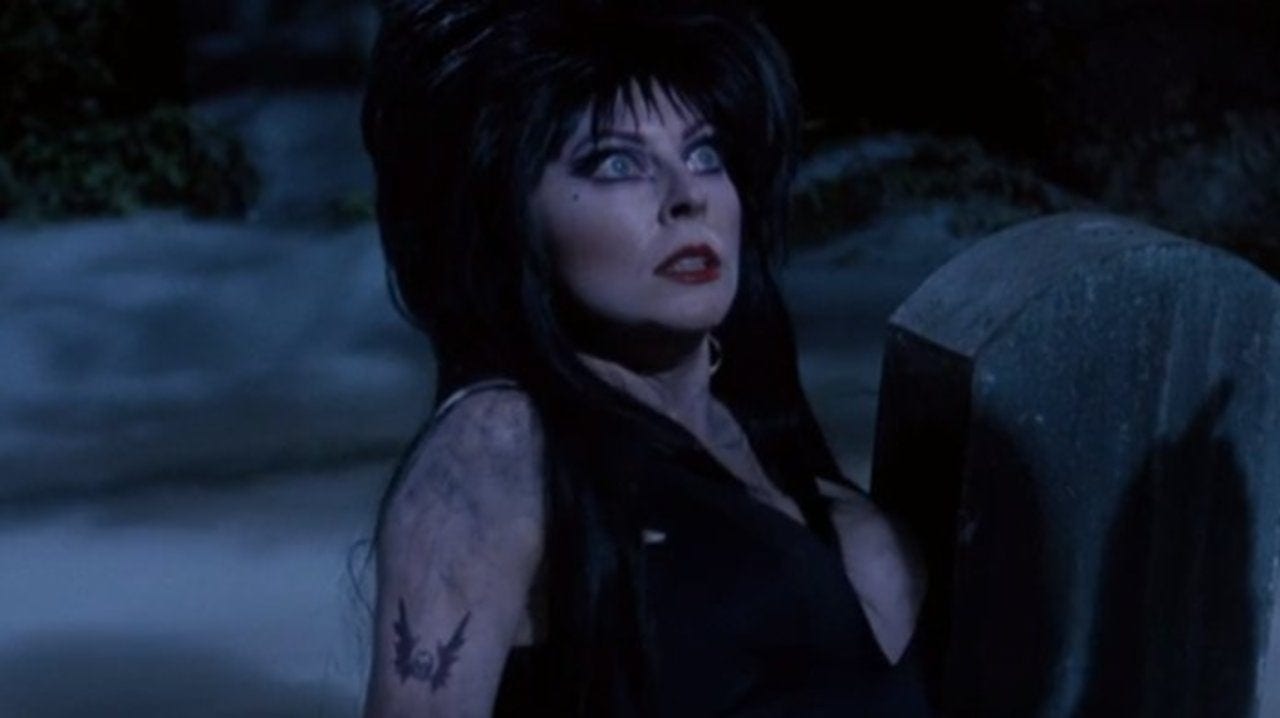 In the end, Elvira takes back her power, both literally with her aunt’s ring, and figuratively with the success of her Vegas show. She started out broke, working with a total creep, went through hell in a tiny town filled with actual evil forces bent on her destruction, and survived it all. Elvira not only came out perfectly intact but with resolve, with new friends and family, and maybe even a few pieces of herself that may have been missing before. She now knows that she comes from a long line of powerful women, and those powerful women helped hold her up when she needed them most.

The real horror in Elvira: Mistress of the Dark was the devil everyone knew. Vincent was not only right under their noses the entire time; he was ingrained in the town and influencing their decisions. Even though he was the actual bad guy, a city full of people turned into an angry mob at his behest and attacked a young woman, a woman who didn’t fit into the mold of what they thought a woman should be. It was easier for a group of people to burn a human being alive than it was to see the malevolence they had been living with their whole lives. Maybe that is the greatest lesson in Elvira: Mistress of the Dark, that no matter what you fear, the darkness has been with you this entire time.