With the exception of that one little indie film that took the world by storm seemingly out of nowhere, Joe and Anthony Russo, professionally known as The Russo Brothers, have dedicated their most recent directorial and producer efforts to a very certain type of throwback film. After focusing on comedies both on the small and big screens to start their careers, the Russos converted to action filmmaking in 2014 with an emphasis on practical stunt work and genre-specific storytelling. What? The guys that made the magic snap glove movie? Yes, I said there was an exception.

Using the Russo’s Marvel output pre-Infinity War/Endgame is hard because in this current internet post-Scorsese/”cinema” fallout world, Marvel films are saddled with the burden of being “theme park rides” at worst and “CGI fests” at their most simple. But one forgets the Russo’s dedication to telling compelling stories that didn’t necessarily rely on CGI. Even if you don’t buy that Captain America: The Winter Soldier was a throwback to ’70s conspiracy thrillers like All the President’s Men, one can’t argue their dedication to practical effects and stuntwork, like with the elevator fight scene, Nick Fury’s road escape, or the highway chase, to name a few. CGI, when used, was a supplement, not the cure (to see the accuracy of the stuntwork, I highly recommend this video). 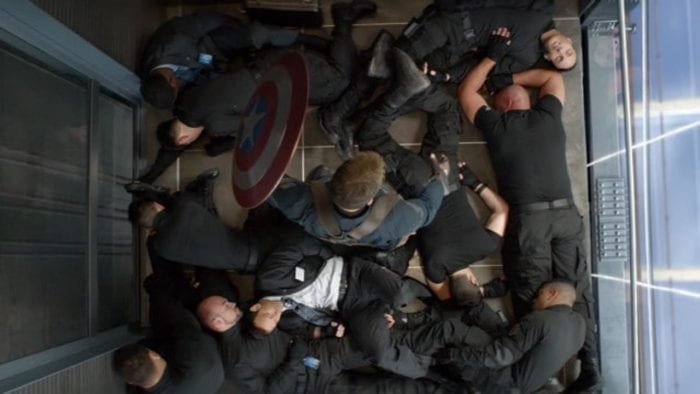 The Russos have parlayed their immense success as big-screen tentpole directors into niche producers, taking their lo-fi sensibilities when it comes to practicality and making similarly themed throwback films on moderate budgets using the stable of big-name actors they just so happen to know. They did it late last year with the very 1996 cop-thriller 21 Bridges, starring Black Panther himself Chadwick Boseman. A lean, mean, practical machine, 21 Bridges only cost $33 million to make and was, with the exception of a cell phone here or there, virtually untraceable in time. Its dedication to simple action stunt work, basic storytelling, and no-frills spectacle transported the viewer to a time when star power and a few squibs and f-bombs were enough to sustain a night at the movies.

And the Russos have continued that trend by producing another stunt extravaganza loaded with star power and nary the appearance of 1s and 0s with Netflix’s Extraction, a film so ’90s that if you blink through one scene of a cell phone being used and squint hard enough you might think the muscle-bound Chris Hemsworth was really Jean Claude Van Damme and you were watching HBO2 at 1:30 in the morning on your parent’s couch in 1997. This is not a slight. This is a winning endorsement of the Russo Brothers’ commitment to producing the cinema of yesteryear, once thought lost to the sands of time. Like 21 Bridges, Extraction provides us a throwback to a time when a lead actor’s charisma carried a film from beginning to end and his costars are mainly just explosives and glistening biceps. 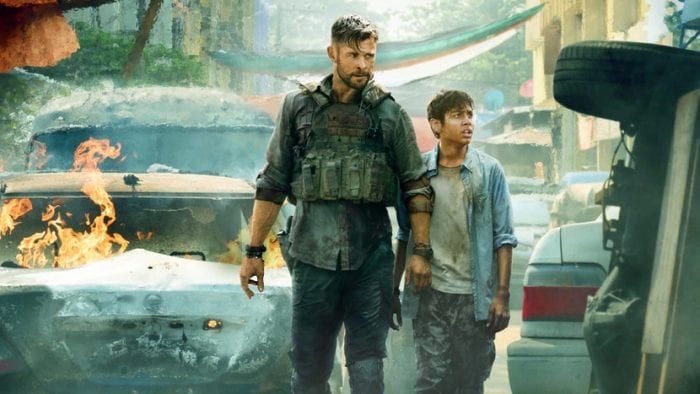 Australian Tyler Rake (Chris Hemsworth) is a mercenary specializing in extractions which is, for the uninitiated, rescuing hostages for a fee (extracting them from harm’s way). Due to an unspecified tragedy in his life, the often inebriated Rake doesn’t much care if he survives, making his acceptance of increasingly higher risk jobs easier to swallow. When his handler Nik (Golshifteh Farahani) advises him of a new job in India, Rake quickly accepts.

The job: the son of imprisoned drug lord Ovi Mahajan Sr. (Pankaj Tripathi) has been kidnapped by a rival kingpin named Amir Asif (Priyanshu Painyuli). Not only does Rake and his team have to circumnavigate the Bangladeshi streets betwixt these warring drug gangs but conflicted parties within Mahajan’s own camp that hired Rake, including the loyal family man Saju (Randeep Hooda), as well as Rake’s growing attachment to the target, young Ovi Jr. (Rudhraksh Jaiswal), makes this particular extraction the most difficult, and deadly, of Rake’s career. 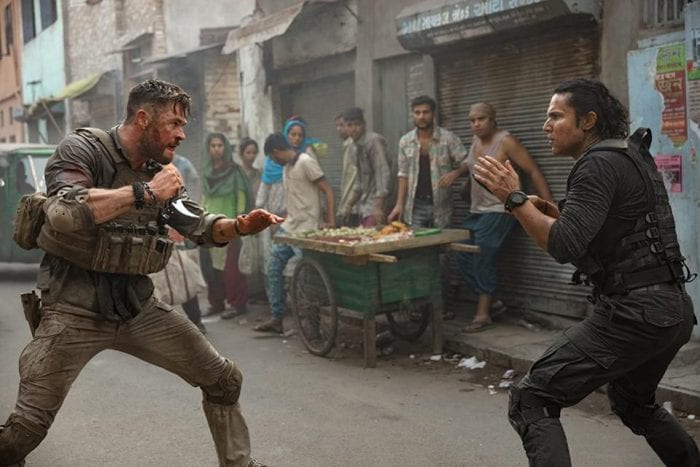 Director Sam Hargrave makes his debut here after cutting his teeth first as a stunt man and then stunt coordinator most prolifically in the Marvel Cinematic Universe (most notably as Chris Evan’s double as Steve Rogers/Captain America). He follows a growing line of stunt-oriented men helming studio pictures and he does a serviceable job with the material given. Hargrave has an innate understanding of how practical action flows and, thanks partially to the influence of the immensely successful John Wick films, has a template to build off of: mainly long take sequences of sustained hand-to-hand-to-foot choreography taking place over thousands of square feet of space.

Extraction’s best moment happens relatively early with one twelve-minute long “one-take” sequence that follows Rake and Ovi as they travel via car, on foot, up and down buildings, and back in vehicles again all while eluding heavily armed villains trying to kill them. It is exhilarating stuff that will keep you so glued to the tube that you won’t be wondering where the cuts are, as there had to be some (no camera can perform the magic Hargrave seemingly made it do when going in and out of a moving vehicle at high speeds).

Despite the exhilarating action, the film is about half an hour too long. The great thing about 21 Bridges and its throwback nature was it was 99 minutes long but even that extra nine minutes was pushing it. Extraction has no right to be any more than 90 minutes yet finds itself pulsing along at 117. This might be due to expanding on Rake’s backstory which, like many a great ’90s action film, is layered in cliche. Effective cliche but cliche nonetheless. Chris Hemsworth, a fantastic actor who never quite gets the credit for it because of the roles he’s known for, sells the hell out of his dramatic work, but the story doesn’t demand the A+ effort he’s giving and feels more like wasted time. 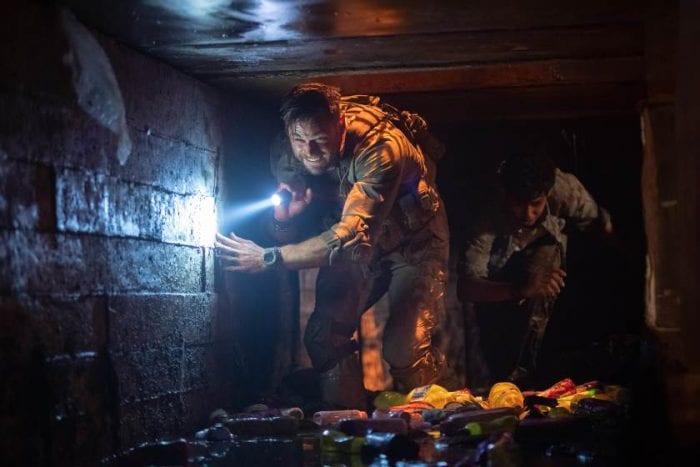 There is also a subplot involving Netflix mainstay David Harbour that, frankly, could have been left out of the movie altogether and saved the film twenty minutes right there. I love Mr. Harbour but the film comes to a screeching halt with his appearance, the script does backflips to keep him in the story, and the believability of some of the things he does as his character moves on pushes this realistic action film into the realm of science fiction (no spoilers but I think you’ll know what I’m talking about when you watch it).

Regardless of these faults, there are worse ways to spend a Saturday afternoon. The Russo Brothers have found another way into the cultural zeitgeist of yesteryear and tapped into an era thought long dead. If you want to give your eyeballs a bit more John Wick and a lot more ’90s late night, then Extraction is just the recipe. It might not be the cinema of the future but it certainly is a fun cinema of the past.