Tim Burton’s sequel to his 1989 hit Batman, Batman Returns, was released in the summer of 1992 and made a worldwide box-office total of $266 million. Not small money by any stretch, but there was something of a backlash to the film that summer. Parent groups and merchandisers were reportedly horrified by some of the content in the sequel. Although the first Batman was visibly very much Tim Burton’s work, it was still clearly made by a studio as a big summer tentpole. For the sequel, it felt as if Burton was allowed to make a more personal film. Thus, Batman Returns skirts a fine line between blockbuster and some kind of arthouse horror show. The Penguin is a horrifying creation, Selina Kyle’s nervous breakdown and subsequent resurrection as Catwoman is somewhat traumatic, and the whole thing has an undercurrent of schizophrenia through various kinks in the subtext.

There was a lot of back-and-forth between Burton and the censors over the content of Batman Returns. The film came close to receiving an R rating rather than a PG-13 in its original cut. McDonald’s had a Happy Meal fast-food tie-in with the film, and after parents and Christian groups actually saw the finished product, they lambasted McDonald’s for promoting such a disturbing film to their children. Subsequently, Burton made alarming claims in the press of what he would rather do than direct the third installment, and Warner Bros decided to take the franchise in a new direction.

Enter The Lost Boys (1987) and Falling Down (1992) director Joel Schumacher. Perhaps he isn’t the first director you’d call for family entertainment, but Schumacher has a solid and dependable reputation for delivering crowd-pleasing films. Ironically, Schumacher professed a desire to take the franchise in an even darker direction at first, but Warner wanted those Happy Meal tie-ins and a film that parents would feel comfortable taking their kids to. Michael Keaton was out as Batman/Bruce Wayne, and Val Kilmer was cast instead. The then-super-hot Jim Carrey and Tommy Lee Jones were cast as The Riddler and Two-Face, respectively, and Chris O’Donnell was cast as Dick Grayson/Robin, with Nicole Kidman as love interest Dr. Chase Meridian. 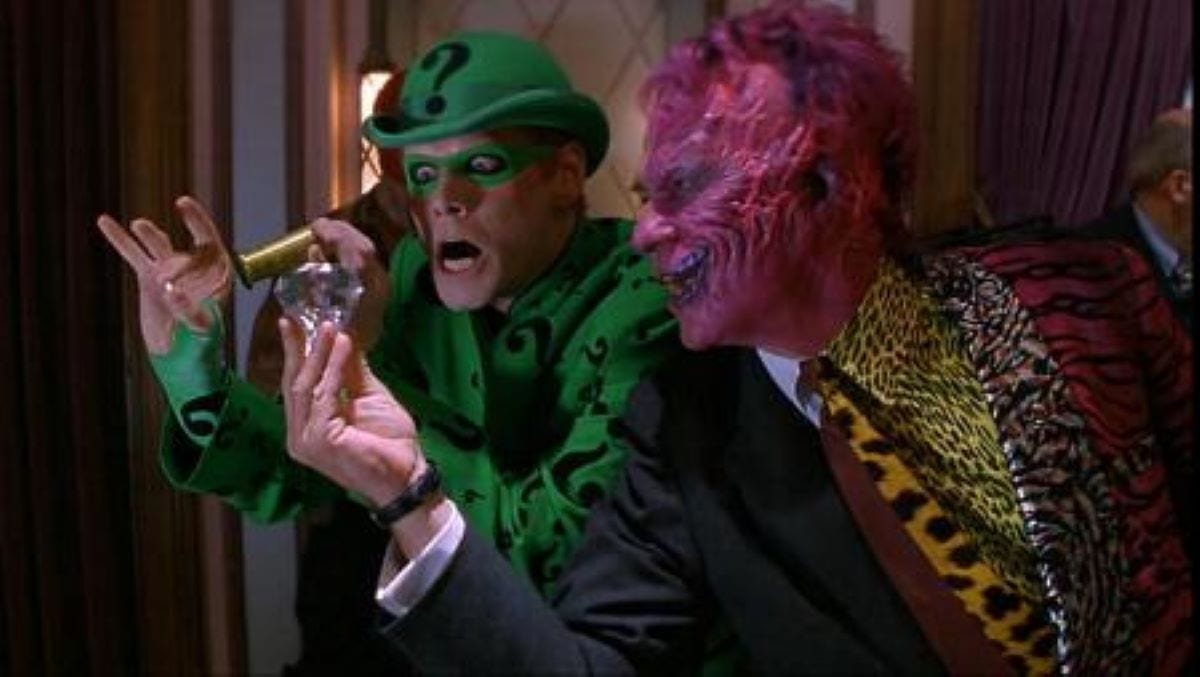 Batman Forever was clearly a much easier film to market, right from the start. The clips we all saw on TV, in trailers, and in music videos showed a film that shared a lot in common with the look of the Tim Burton movies but moved in a completely different way. It has fluid and kinetic action scenes, it took place in a Gotham City (which seemed to have a fondness for sudden neon), and it had villains that didn’t just go over the top, but instead went to some scenery-chewing galaxy nowhere near our stratosphere.

During the promotion of the film in the summer of 1995, things started to come out about the turmoil behind the scenes. Kilmer was in the middle of his run of big studio films and being as difficult as he could be on set. Schumacher did not mince words about Kilmer and still claims he was “psychotic” on the set in 1994. Then there was Tommy Lee-Jones (not the easiest man to get on with at the best of times, apparently) who out-and-out hated co-star Jim Carrey, and seeing as they had most of their scenes together, you can get an idea of how tense things must have been.

Batman Forever was released in July 1995 and had a record-smashing opening weekend of $52 million in the states. It then went on to take in $336 million worldwide. A total still shy of the 1989 movie’s take, it was nevertheless substantially more than that of Batman Returns. Clearly, Warner Bros did something right. 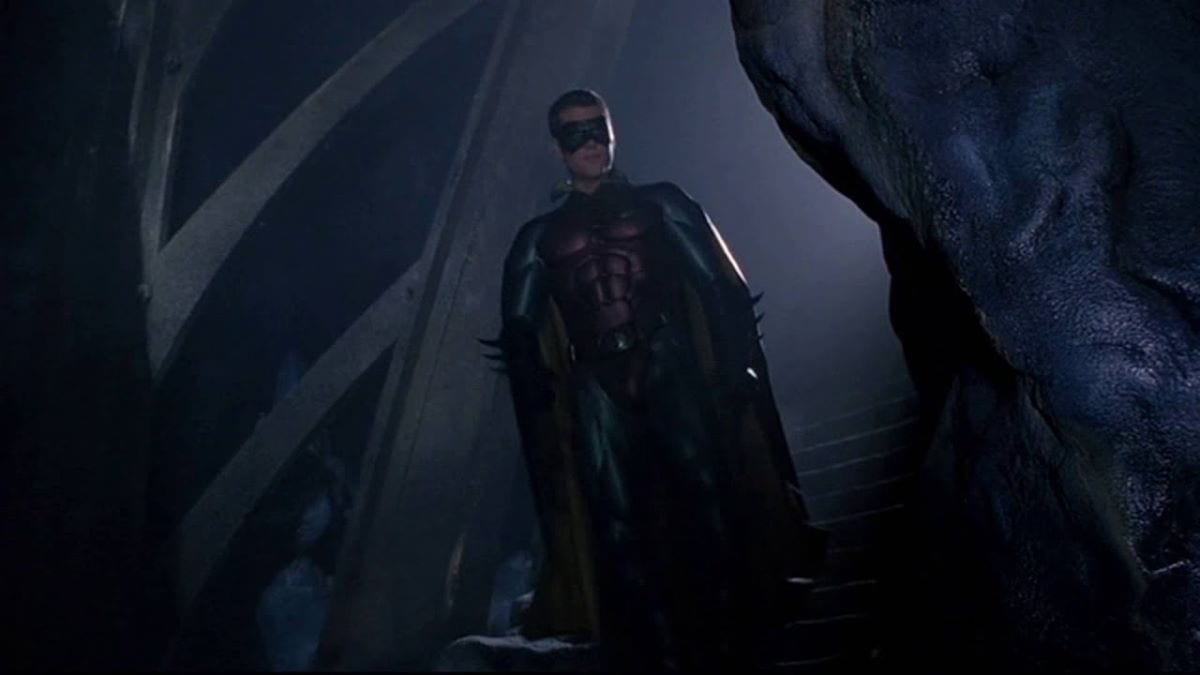 Right from the start, it is clear that this is a new direction for Batman on film. Batman Forever opens with an action scene much like the previous two, but now the laws of physics have gone right out the window. Now the action scenes are less darkness and jumping off buildings in the shadows; now, it’s all explosions, swinging from suspended stolen bank vaults, and last-minute rescues. The set design is similar to Burton’s, except now everything has a certain exaggerated, overpopulated, Vegas stylization to it. Then, of course, we have the controversial nipples on the Batsuit and the gratuitous shot of Val Kilmer’s Batbutt. The humor is also much more in the vein of one-liners rather than the dark comedy of the Burton films. Schumacher clearly harkened back to the ’60s TV show with his choices of camera moves, rather than emulating the action films of the time.

Now, I seem to remember Batman Forever being received as flashy but empty fast food when it was released, and it is only really since the release of Batman and Robin in 1997, and my familiarity with the internet, that I have learned that Batman Forever is almost just as despised as the awful film that followed it. I’m going to tell you something now that may well cause you to stop reading and never read anything I write ever again: I actually kind of like Batman Forever. Now allow me to explain.

With the two Tim Burton films, there was a frequent complaint that Batman was never the focus. You could make a pretty good counterargument against that now, especially in light of Returns‘ current reputation, but it was always felt that Burton was far more interested in his grotesque, freak villains rather than the freak who’s name is in the title. Batman Forever addresses this concern. We get a lot more insight into the psychology of a man who dresses as a bat and throws himself into fighting crime. It is brought out through Batman’s relationship with psychologist Chase Meridian—perhaps in a clumsy way for some titillation rather than insight, but it’s there. More specifically, what’s eating Bruce Wayne is explored in his relationship with Dick Grayson.

In Batman Forever we see the origins of the Boy Wonder as his circus family is slaughtered by Two-Face. Bruce Wayne takes in the now orphaned Dick Grayson for reasons that belong in another article exploring the not-quite-flying-straight subtext of the film that was quietly revolutionary for 1995. Bruce recognizes in Grayson a reflection of his younger self. Grayson is angry, thirsty for revenge on the maniac who took everything from him. Bruce discourages Grayson at every step initially, but this becomes more difficult when Grayson discovers Bruce’s alter ego. This then leads to an actually great speech by Kilmer as Alfred (Michael Gough) tends to his injuries in which he warns Grayson that revenge will never be enough, and once that road starts, it never ends. It’s a great piece of writing that understands Batman, and Kilmer and Chris O’Donnell actually excel at selling the relationship and conflict. Kilmer may not have been happy on set, but he was a solid choice for the character. 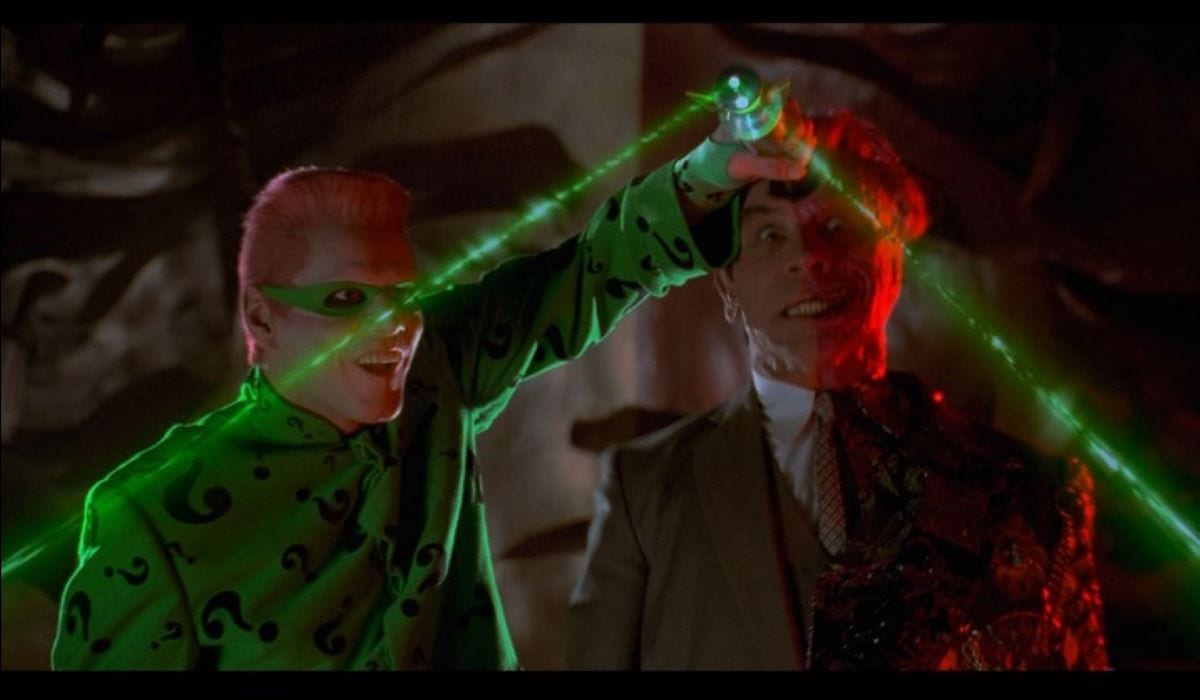 On one hand, you could make an argument against this by saying that Jim Carrey’s and Tommy Lee-Jones’ steady diet of scenery-chewing runs all over any importance Batman, and in turn Robin, might have in the narrative. I would say that by competing with each other in the over-the-top sweepstakes, Carrey and Jones kind of cancel each other out, along with any insight into their own characters. Carrey as Edward Nygma/The Riddler actually has a pretty good arc, but we never get anything in terms of Two-Face’s motivations beyond what we already really know from his appearance and coin-flipping. All this does is bring the focus back to Batman and Bruce Wayne. By the end, we have perhaps identified Alfred as the secret enabler in all of this, and in a very brief shot, Grayson seems to get his vengeance—and feels disappointed, maybe? It’s hard to say, but it feels like a shot choice that makes Bruce correct in his warnings, one that could have been longer to make the point. The important thing is that by the end of Batman Forever, Batman and Bruce Wayne are at peace with who they are. I mean, Kilmer even smiles under the cowl at one point, and when has that ever happened?

The action scenes in Batman Forever are also suitably pulse-pounding: the introductory scene with the helicopter, a car chase that ends with the Batmobile climbing a building, and Grayson’s alleyway fight with some neon thugs all stand out. It feels a lot more like watching a Saturday morning cartoon than any previous superhero blockbuster, and I’m not sure this is a bad thing. All of this and the above-mentioned psychology competing with the camp is why I have never been able to write Batman Forever off as the dreck so many have.

The fact that we never got a third Tim Burton-directed film is a shame, and perhaps the seeds were there all along in lines about “chicks digging the car” and “I’ll get drive-through,” but what came after Batman Forever was a true travesty. Batman and Robin is one of the worst, perhaps the worst, blockbuster of the ’90s. It’s so bad that when compared to it, Batman Forever looks much better than its reputation suggests. There was no Bat credit card, Bat ice skates, or Arnold Schwarzenegger murdering the pun forever in this film. There was instead a renewed focus on the main character, an attempt to please everyone, and a film that delivered with action. By that rationale, Batman Forever does what it sets out to do—it may be product rather than art, but it delivers, and sometimes that is enough.