This article is also available in Audio, exclusively for our Patreon supporters. Follow the link to listen, and thank you for all your support! https://www.patreon.com/25YL

Taking place over the course of a single night, Cloudpunk puts you in the role of new-to-Nivalis, new-to-the-job Rania. Cloudpunk, the in-game company, is a delivery service, moving questionable packages from one part of the city to the other without alerting the business-cum-police, CorpSec. As a driver, it’s Rania’s job to not ask questions and just make the delivery. Deliveries (and the entirety of the gameplay) are completed through a combination of driving your Bladerunner-esque hovercar and casually strolling through the neighborhoods, chatting up package recipients and the occasional civilian observer.

Cloudpunk’s focus is on small stories. Most of the narratives are self-contained to a single delivery. There is an underlying story subtly woven throughout your journey, but that relies more on your own emotional experiences to reach a narrative end, rather than an overarching tale.

And as a game about small stories, it’s pretty successful. I can’t say I ever found myself totally in love with any of the little stories, but they certainly held my attention. But those same feelings also added to the distance I felt from the game. Each story was good enough that I wanted to see the next one, hoping that it would be the one to push me to fall in love with Cloudpunk, but they never quite got there. They’re all competent and finely executed, just lacking that spark to make them great.

But more than anything, the core of the game is driving (flying? hovering?). Most of the story takes place while moving from point A to point B as characters discuss their days, deliveries, and lives over your com systems. And this is where Cloudpunk shines. The driving feels perfectly adequate, and that’s a compliment. It embodies the mundanity of deliveries with an entirely functional system that neither wows nor fails. It’s also rarely your main focus, allowing your attention to drift to the stories happening around you, rather than fret over steering controls.

The game’s early brilliance shines through in these driving sections, highlighting the connections between story and gameplay. Cloudpunk occasionally hands you a choice but coats it in gray. Even simple decisions are delivered with moral complexity as your automata/dog/conscience adds nuance to what seem like clear-cut choices. Then the game makes you sit with your decision, sending you on to your next delivery in silence. Cloudpunk never outwardly states whether your choice was good or bad. There is no morality tracker to tell you if you’re playing as a hero or villain. Your coworkers, friends, and clients rarely commit one way or another. You’re left with your choice, the road, and an internal war raging over your decision. 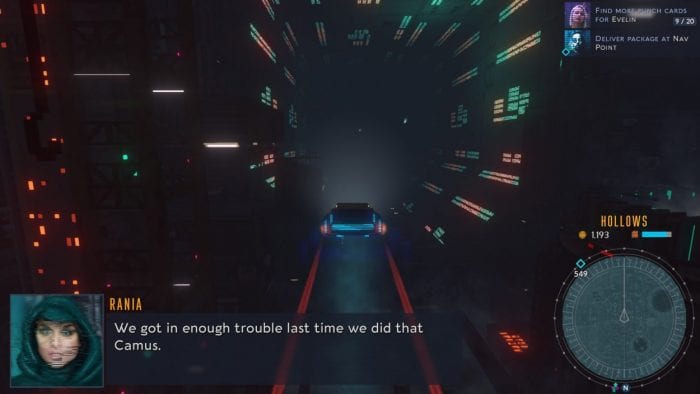 Unfortunately, this does break down a bit later as some choices do come back to bite you, but that initial shock of “oh, that’s it? I just have to… live with what I did?” is wonderful, and an idea that shines through the entire game. Even when you come face to face with your consequences, the game still shrugs off a morality judgment. No one in the game knows if what you did was good or bad, and you feel that in every element of the city as characters shrug off your questions while Nivalis watches, uncaring.

The driving is also the most compelling of the gameplay thanks to a wonderfully designed voxel cityscape that oozes with cyberpunk aesthetic. Buildings crumble in the distance, falling into the ocean while advertisements flicker by and booming voices promote the latest stims. A driving soundtrack (pun intended) is the final piece to creating an overworld that you just simply don’t want to leave.

Of course, the desire to stay off the ground is helped by the roughness of the walking sections. Again, technically fine, but some of the games bigger issues start to show. For one, the voxel people are rough. They have a sort of Mega Bloks feel to them. You recognize them as characters, but there’s just something sort of off and unsettling about them. Thankfully, you spend most of the game focused on the dialogue boxes in the corner with fully rendered I Have No Mouth and I Must Scream style portraits rather than the strange worm people. Unfortunately, the portraits don’t divert from the absolute glut of collectibles.

The main game can be completed in about six hours (this is not a bad thing – it’s a tight game). I took the initiative to hunt down every collectible I could find before finishing the game. My time clocked in at around 11 hours. Your first instinct should be to yell “what did you expect” at me, and I would normally agree with you. But one questline requires you to gather 80 punch cards scattered throughout the city. Punch cards that appear on the map with the same symbol as every other collectible. All 200+ of them.

Thankfully, there are a few items interspersed that do contribute to other sidequests, but that’s maybe 10, if I’m feeling generous. Add on another 20 pickups for small repairs around town and hey, you still have over 100 miscellaneous pieces of garbage you’ve picked up in your hunt to finish a storyline. Which is unfortunate. I enjoyed wandering through the city for a bit, wonky characters and all. The atmosphere is great. But you can only pick up literal trash for so long before it becomes a burden. A burden that could easily be solved by reducing the number of pickups, both quest-required and miscellaneous, by a solid margin

Though I think ending on that note does a disservice to Cloudpunk. Yeah, there’s some collectible glut, but there’s also some great writing, wonderful voice acting, and clever ideas strewn throughout an incredibly aesthetic game. It does a lot right and does a lot that is genuinely enjoyable. Even with my complaints, I enjoyed my time with Cloudpunk and would still recommend it to people who are looking for a relaxing, story-driven cyberpunk game.

Just don’t pick up all the collectibles.