I’ve been thinking a lot about Sun Choke (2015). It is a film that will leave you with those nagging questions, a burning desire to know more. That might annoy some people, and in some instances, it annoys me. But as long as there is some mystery to mull over, and enough questions are answered that can lead you to your own conclusions, that’s a perfect formula for me. Like anything David Lynch has ever made, several possible answers are there, but they are open to interpretation—you can choose the one that sits best with you.

Sun Choke follows the story of Janie (Sarah Hagan from Freaks and Geeks) who undergoes radically intense treatments for her severe mental health disorder, cared for by a woman who has been her nanny her whole life, Irma (Barbara Crampton). As the treatments become more extreme, Janie seems not to get better but to go deeper into the psychosis that has gripped her. Recovering from a trauma, a cloudy piece of her life to the viewer, Janie teeters on the edge of complete insanity. 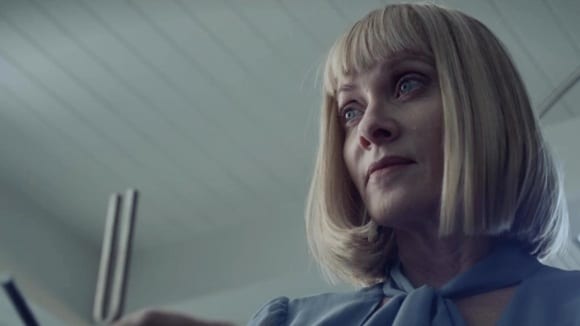 The film is a psychological horror, a character study of co-dependency and how the will to try to cure another person doesn’t always mean the best care for them, or that the one they’re trying to help will end up in any better shape than they were before. Sun Choke won’t give you all the answers; it doesn’t even ask all its own questions, leaving that heavy lifting to the audience. And I like that.

So much happens that you might find, at times, the story is hard to follow. It isn’t deliberately deceptive in that Cresciman doesn’t want you NOT to understand. He employs a non-linear narrative, flashing occasionally between past/present, while also keeping certain details from us. In this sense, being hard to follow doesn’t make you feel stupid. Revelations are saved for later. Instead of how some movies like to hit you with twist after twist, this story doesn’t come at you that way. It milks the tension and suspense perfectly. 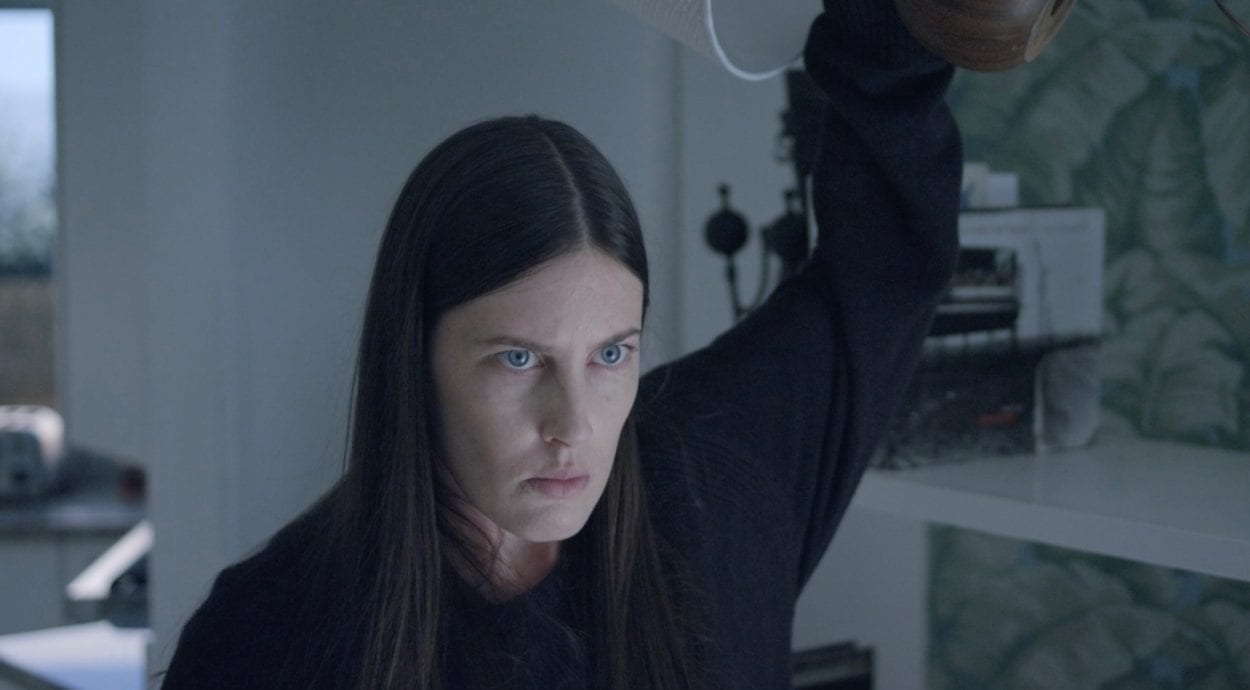 The anxiety grows from this up close and distressingly personal character study of Janie. Gradually, we peel away the layers of mystery surrounding her psychological state and what brought her to the tragic point of emotional fragility from which we begin the film’s journey. It’s hard for us to know how to feel about Janie because she’s our protagonist, while at the same time we’re privy to the despicable side of her character, too. Her obsession becomes frightening, which in turn becomes psychosexual in the most visceral way experiencing the lowest moments of Janie’s transgressions.

I just want what‘s best for you, little girl. -Irma

Ultimately, the suspense and tension created in these sequences when Janie oversteps boundaries of socially acceptable behaviour can often reach unbearable levels. Hagan’s central performance as Janie is truly staggering, a fearless and simultaneously fearful role where she plays a tortured animal in addition to often being responsible for her own wounds. Her performance is encouraged by Cresciman’s writing, placing us alongside Janie in a horrific headspace, filled with terror by the end.

What do we really know about what happened to Janie? Irma (the ever-awesome Scream Queen Crampton who as this doctor of sorts gave me all the ASMR tingles—not sure it’s right to feel relaxed during such a tense movie? Maybe it adds to the allure…) has been the housekeeper/nanny for Janie since her mother died, just an hour after Janie was born. It seems that she was a breech baby and got stuck in the birth canal. It could suggest that Janie had brain damage, which if the case, couldn’t be cured no matter what therapy Irma tried. Irma and Janie are close, but Irma is very much a ‘sweet on the surface, but evil stepmother’ type figure. She holds power over Janie as a caretaker, a job given to her by Janie’s father—a promise she made to him, one she refused to break. Why? Well, that is one thing we’ll never find out for sure, but there is certainly a feeling that Irma is just as trapped as Janie. In fact, we never see her leave the house. Did she even exist? Or was she all in Janie’s head?

The plot largely deals with co-dependence, the idea of one person as host and the other like a virus, living and feeding off them. It becomes clear throughout the film is that Janie has issues with her identity, something reoccurring in several scenes (as when Irma stands her by the mirror and asks, ‘Who do you see?’). Also painfully obvious is that Janie really should be in a hospital having proper care and away from the public. She had a violent breakdown at a certain point, shown in a brief, horrifying flashback of rage and blood, so the trauma to her psyche is very real.

The middle section of Sun Choke is an effectively creepy cycle of the heroine spending her free hours playing stalker/voyeur, and then coming home to her usual regimen of chemical and psychological torture at Irma’s hands. No matter what happened in her past, it is real, whatever is going on inside her mind. And the fact Irma treats her bizarrely—like using a tuning fork and whispering ‘sun choke’ in Janie’s ear—only serves her for the worse by making her relive her past traumas over and over. Janie does not get better; she only learns how to foster a greater sense of dependency on Irma, and later she becomes obsessed with a woman named Savannah (Sara Malakul Lane) to whom she feels an inexplicable yet profound connection.

Janie cannot gain control of herself. She can’t fixate on a proper identity of her own. First, Janie tries to become Savannah. She finds a man Savannah had sex with (which drove her obsession deeper), then crawls into bed with him, has sex with him herself, during which she caves his skull in with a decorative rock crystal. In this scene, she is both on top of the man and seeing herself looking in through the window. When she realises there is no becoming someone else, that she is stuck with who she is, Janie goes to further lengths to find control: she decides to kidnap Savannah. 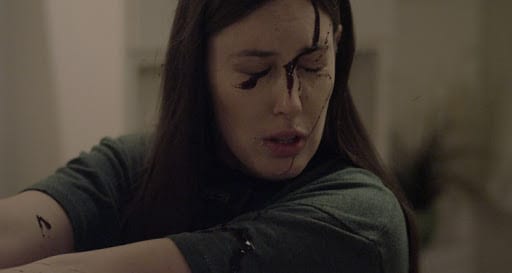 But we can’t forget the strange, often sadistic methods of healing Irma forces on Janie. The girl takes every treatment as if she also expects it to heal her. Her subservience eventually manifests in her taking back control with catastrophic results.

The only thing standing between you and the abyss is how much I love you. -Irma

Throughout there are fascinating visuals. These relate directly to Janie’s dissociation from the self. She spirals further from her own identity, which is shown best via the cinematography and chosen shots. There are a couple of mirrored shots, reflections, and they allow us to peer into the separation happening in her head. The music score by a fantastic Hip Hop/Electronica producer Boom Bip (Neon Neon), really adds to the tension, but also creates beauty in this otherwise disturbing tale. It is minimalist, much like the modern, elegant but cold house/prison that Janie lives in. Everything is in the right place, not a speck of dust in sight and the accompanying music further accentuates that stark, sterile, clean feeling.

There is a nuanced unravelling to Janie and Savannah that ultimately leaves both questions and answers alike. The success of the muddled and ambiguous plot has much to do with its fantastic cast and their incredible on-screen chemistry—the tension between Irma and Janie, and the mad, sexual intensity between Savannah and Janie that implodes in its mesmerising insanity.

Sun Choke comes at you with a weaving of genres. We get intense drama, then splatters of blood flick across the screen, jarring the viewer because it’s so unexpected. The script helps, the story doesn’t twist and turn. Instead, it sort of unfolds its mysteries one by one, revealing only portions to reel us in.

By the end, you’ll either hate or love the movie. We never know for sure what made Janie lose her mind. Being considered a murderer by your father from the moment you are born can’t be good for the psyche. Did Irma calm the monster or create it? Maybe it is an entire delusion. Perhaps all the events are real. Cresciman straddles a line where you never know exactly what’s going on, if it’s really happening or Janie’s imagination or just in her past, but as director and writer he maintains a level of interest, compelling you to keep watching and discover what lies beneath Janie’s trauma. There’s no set meaning for art. Authorial intention is one thing; what the audience concludes is another.

Sun Choke is a thought-provoking dissection of the psychosocial implications of good-intentioned but ultimately toxic protective care. If more ambiguous, yet wholeheartedly absorbing films directed by Lynch, Polanski and Aronofsky are up your street then you will probably enjoy Sun Choke which is now available to stream on Shudder.