Every month, we’ll be looking back at the music from 1995 to explore why these albums are still relevant to us 25 years later. This month brings us Filter’s Short Bus, Disney’s Pocahontas Soundtrack, and Pink Floyd’s Pulse. 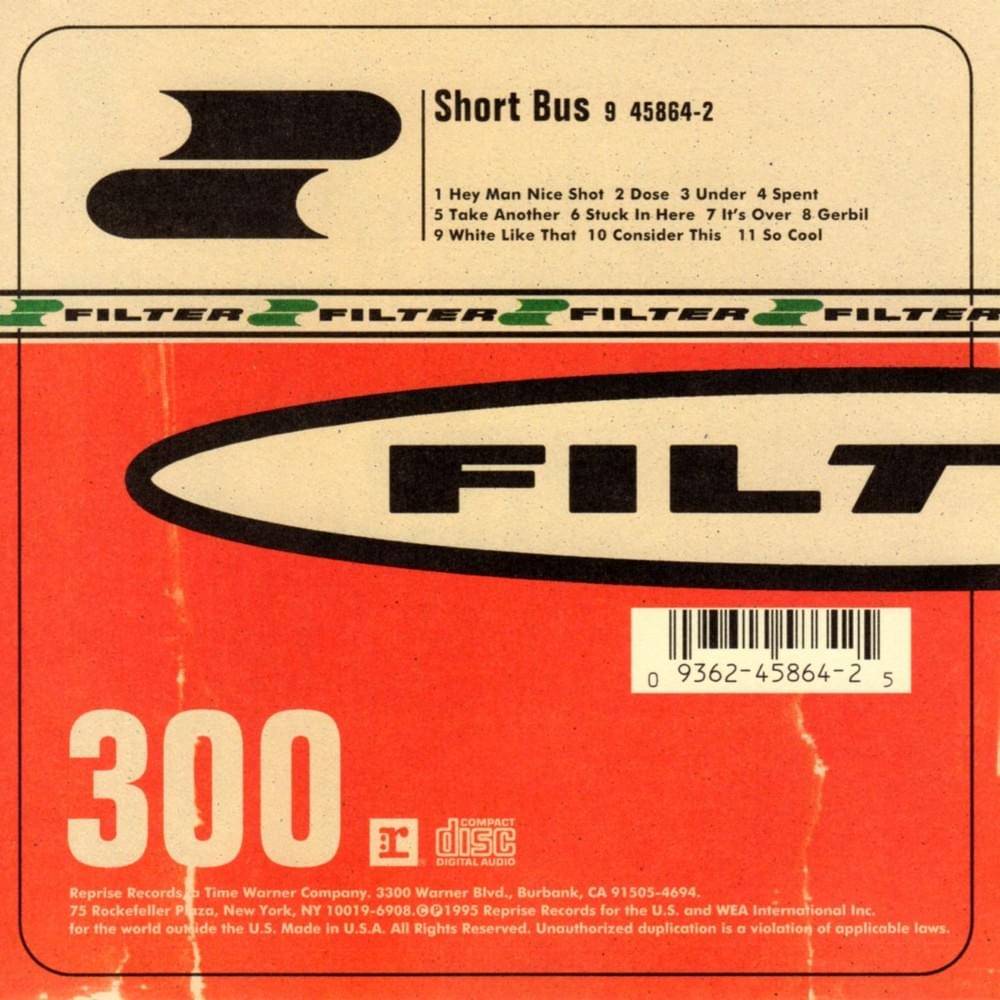 I’m pretty sure I bought Filter’s Short Bus shortly after it was released. “Hey Man Nice Shot” was on the radio and I’d been taken up by Nine Inch Nails even if I hadn’t gotten quite taken up by the whole industrial scene just yet. I knew that Richard Patrick was a friend of Trent, or something like that, but not much else about the band. It was the ‘90s, after all.

I’ve always liked it, though. This is a really solid album. I still enjoy every song, and the whole coheres, with one track flowing into the next. And when I listen to it now it takes me right back to that time when I was a disaffected teenager in the ‘90s.

In retrospect, though, I feel like there are a number of things that feel problematic about the lyrics. In the zeitgeist of the times, it may have all just felt like a middle finger to “the Man,” but I can’t feel so good about the way they come across now. It gets me thinking about how the ethos of the ‘90s that this album embodies was not overtly political, or clearly on the side of progress, so much as it was contrarian. And while I can still connect to that I guess I worry as I imagine someone who identifies as “alt-right” rocking out to this album. The point being that it is very easy for me to imagine this.

Equally, it is a bit harder to get into “Hey Man Nice Shot,” which was the biggest single off the album, after Columbine, Sandy Hook, Parkland, and other mass shootings. I know the song is about suicide, and there is a definite irony to it, but I guess I’m not sure if my issue is that it is 25 years later, or that I’m 25 years older, or somewhere in between.

The song is apparently about R. Budd Dwyer killing himself during a press conference. Or that’s what inspired it. I actually don’t know that it makes sense to say the song is about that. I don’t think it all jibes. The best I can do is connect with how the fact that an elected official killed himself on live TV is kind of hilarious. The reasons why seem harder to connect to. And ultimately I think Filter was on that same page—there is nothing about what R. Budd Dwyer did that should inspire us.

When I first heard it, I thought the song might be about Lee Harvey Oswald or Jack Ruby. I think I’d recently seen Oliver Stone’s JFK. Regardless, I want to be clear here that I never found the message of the song to be “acceptable”—it was always clearly contrarian and ironic on purpose, but also a bit ambiguous and easy to mold in one’s mind in various directions.

Apparently a lot of people thought it was about Kurt Cobain. I never thought that. Keep in mind that we meaningfully didn’t have the internet back then. Regardless, it doesn’t really land if you think about it. Nothing about “Hey Man Nice Shot” presents a cogent argument. It’s a contrarian statement, and one any number of us may have connected to in the mid-‘90s, but that’s all it is.

I miss it, in a certain way. We were not only disaffected and disenfranchised, we were pissed about it. Things are worse now, but I worry that the spirit of Short Bus may have shifted over to those we call—or who call themselves—the alt-right. The music lends itself to that a bit too much.

When it comes down to it, though, I think that Filter was just picking up on something that was popular at the time. There was a contrarianism, and a nihilism, in the air. Short Bus embodies this. They followed up with “Take a Picture,” which is saccharine crap. I have never listened to that song’s album, Title of Record, or any Filter album beyond Short Bus. At the time I could think of nothing worse than “selling out” and I have to say I still kind of think that Filter did that. “Take a Picture” is one of the worst songs I have ever heard. It makes me wonder whether Filter was ever authentic in the first place. Maybe they didn’t sell out, but were always playing to the times they found themselves in and managed to nail it with Short Bus.

Let’s get something straight, alright? I am not sure who is competent enough to write about the scores of Alan Menken. Only another genius should be called forth upon this task. Maybe Hans Zimmer can write this short piece. I surely can’t write about Menken. So, uh, goodbye.

Maybe I can write my way around it and write about the Neil Young song of the same title and just say that I made a mistake.

I can give it a try writing it though.

Disney was pulling no punches in the good ol’ year 1995. Toy Story (Randy Newman), A Goofy Movie (Carter Burwell and Don Davis) and Pocahontas (Menken, Schwartz) were all released that year. And what year that was. All those films feature stunning amazing music and songs that we listen to and talk about 25 years later.

The characters express themselves here only through songs and music as they should in a proper musical/opera. And no song, no note, no piece of music is wasted on anything insignificant—everything tells you a piece of a story, a piece about Smith, Pocahontas or the beautiful land.

The film surprisingly starts with the British on their ships, their arrival on the New Land, and their plan to destroy the land by digging and mining for the non-existent gold. And they are prepared to fight the Injuns as they say. (“The Virginia Company/Ship At Sea” tracks on the soundtrack)

Menken and Schwartz pull no punches here and deliver not so optimistic Disney film from the start.

Only then do we focus on Pocahontas. She lives a happy life with her animal friends—a raccoon, Meeko, and a hummingbird, Flit. Her only fear is to be wed to a Kocoum, a warrior—a total opposite to the free-spirited Pocahontas. And occasionally she chats with the Grandmother Willlow—a spiritual talking tree. (“Steady as the Beating Drum,” “Just Around the Riverbend,” “Grandmother Willow,” “Listen With Your Heart.”)

The villains are greedy, power hungry madmen who walk over dead bodies just to get what they want. Which is basically respect, which they’ve got none back in Britain. They think the world can be won through violence and ignorance.

But the world is nothing like that. The world is about the art of nature. The peace you can only find in the forest. The peace you can among kindred spirits. You cannot find peace and happiness in gold. The ignorant one in this equation is the white man, the conqueror (and John Smith is the only one who has an open mind). Pocahontas is one with the land, one with nature. This is all in the film’s anthem—“The Colors of the Wind.”

The British and their leader easily paint the Us vs. Them analogy and calling the Powhatan Tribe Savages (“Savages Part 1/Part 2”), basically painting the tribe as mindless beasts—“They’re not even human!“ as Governor Ratcliffe proclaims. Perfect introduction of the villain’s mind.

“Listen With Your Heart” and “The Colors of the Wind” are my personal favorite for their meditative, calming atmosphere and the ecological/conservative (for the lack of a better word) message.

Pocahontas is a wonderful film from the Disney Renaissance era, bolstered by a catchy, powerful score featuring a beautiful message.

If you discount the brief reunion at 2005’s Live 8 charity event and the release of The Endless River (a collection of outtakes from 1994’s The Division Bell in tribute to the late Richard Wright), Pulse was essentially Pink Floyd’s last stand as a functioning writing, recording and performing unit.

Having recorded and released two albums since Roger Waters acrimoniously left the group in 1985, Pink Floyd were having a fresh run of success, particularly in the live environment. Case in point: the 1994 Division Bell tour that lasted 7 months, took in the USA, Canada and Europe, ended with a 14-date residency at London’s Earls Court, and grossed over $300 million worldwide. Pulse is the live recording of that tour, taking recordings of songs from across different dates on the tour and stitched into a cohesive whole.

By 1994, Pink Floyd were 3 years away from the 30th anniversary of the release of their debut album. In effect, they had become a heritage act. As such, the shows they played on that tour represented this fact, eliminating any of the experimenting or jamming the group were known for in their heyday and giving the audience just what they wanted: the songs they knew, performed live as they had been on record.

The songs then became secondary to the live experience and the admittedly extravagant, monumental light show and visual effects that accompanied the shows. In this respect, the video recording of Pulse was much more successful, giving viewers the true multimedia experience that the tour offered fans.

On record, Pulse could only offer the Floyd as heritage act. That is not to say Pulse is a bad record; far from it. The song selection is strong and functions as a veritable Floyd greatest hits of sorts, with only a few selections coming from The Division Bell and the remainder coming from the group’s “peak” period. The set is split into two (and spread across two CDs on the album), with a stroll through the back catalogue on the first set, with the second set featuring arguably Pink Floyd’s greatest album, The Dark Side of the Moon, being played in full to a rapturous audience. Pulse, then, successfully manages to represent the musical and conceptual sides of Pink Floyd, both of which were central to the success of the group.

No, Pulse is not a bad album. But it is possibly unnecessary. As stated earlier, the jammier aspects of the band were replaced with crisp, professional and faithful renderings of the back catalogue. This is fine in that songs still stand the test of time and therefore still provide an enjoyable listen. But it also means there’s not a lot to discern the songs from their original studio recordings. Sure, David Gilmour’s vocals are a little looser, backing vocals might feature a little bit of a different arrangement (on “Money,” for example), the tone of the recordings—with being live—are perhaps a little warmer. But these are superficial changes at best and insignificant at worst. The album is better enjoyed as a kind of re-performed greatest hits, but if its peak jamming Floyd people are after, they won’t find it here.

A recommended album, but for Floyd completists only. Watch the video recording for the real Pulse feel.