Lost in Translation, the seminal film by Sofia Coppola is truly beautiful on many different levels. Everything from the loveable performances, perfect music and exquisite cinematography adds layers to the ephemeral gem it is. This is one of the most difficult films I’ve written about as its power lies in the emotions it conjures and that can be hard to transcribe. It’s a hazy, feel-good story, tinged with melancholy but also comedy and catharsis. It’s both complex and simple simultaneously in its themes and presentation of them. The narrative follows the chance meeting of Bob (Bill Murray in the role he was born to play) and Charlotte (a very young, starry-eyed Scarlett Johansson).

Bob is an aging actor who’s going through a midlife crisis. He’s travelled to Tokyo to begrudgingly sell-out and be paid an obscene amount to shoot a commercial for Japanese whisky. His marriage is on the rocks and it’s affecting his relationship with his kids. Charlotte is also in a state of disillusionment in her life, as she’s recently graduated with a Philosophy degree and doesn’t know what to do with it. She’s travelled with her husband to Tokyo, who’s a celebrity photographer and far too busy with work to give her any attention. She seems to be having doubts about their relationship; she married very young and they’ve been together for two years.

It’s clear to see the foundation of their connection is that they’re in similar situations, experiencing the same feelings of loneliness and displacement despite their significant age difference. Set in Tokyo, the city acts as the personification of this alienation and is a character in itself. It’s perhaps the most suitable place to embody this emotion, with its bright neon lights, numerous bizarre customs, and unbridled optimism acting as a huge counterpoint to their states of mind. The radically different culture, both traditional and modern, accentuate their inability to connect with the people in their lives. 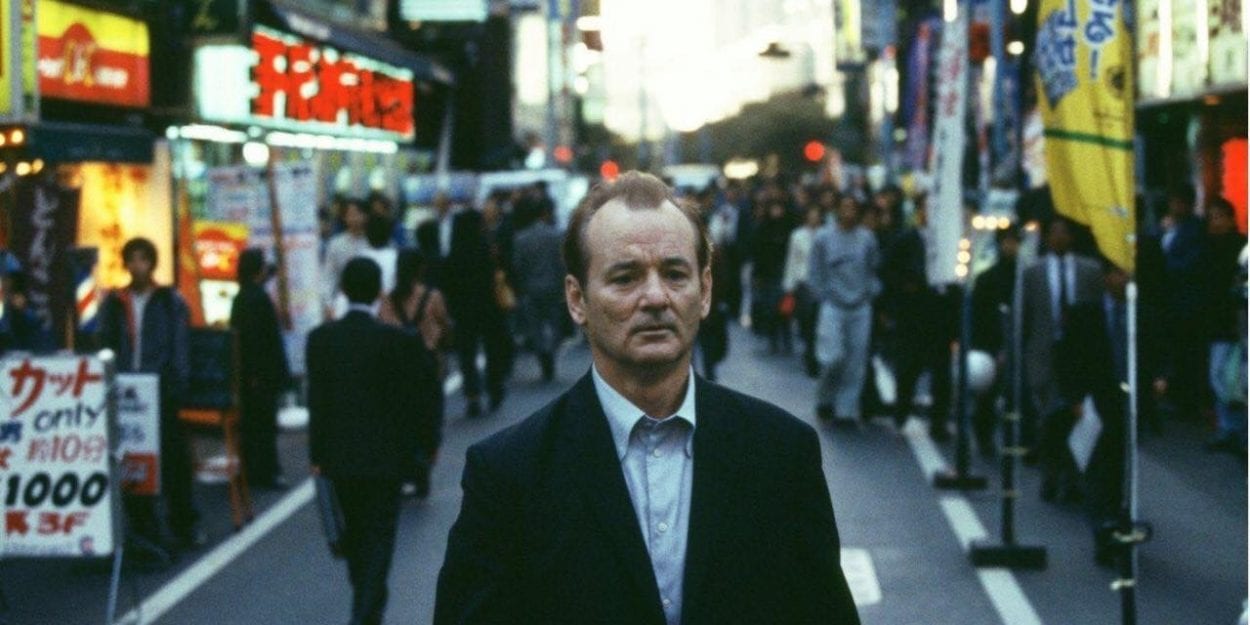 Most of the narrative takes place in the Park Hyatt, a very high-end hotel and it acts as a safe place, with its numerous comforts. It’s neutral character and ambience sits in stark contrast to the surrounding area of Shibuya, home to the busiest road crossing in the world, which features prominently in numerous scenes. Luxurious hotels such as these can be the perfect place to meet other tourists and people you wouldn’t usually come into contact with in your day-to-day life back home. Most people have had a holiday romance of sorts but sometimes it can lead to something more, a deep connection between two people out of their element, from different parts of society.

Tokyo also acts as an extreme representation of modernity and excess, the very things the main characters have but not what they need to be fulfilled. The difficulty they have connecting to the alien Japanese culture is embodied in the title of the film perfectly as well. This is also shown to great comedic effect when Bob is having direction translated whilst on set. The director talks passionately at length, only to have the translator paraphrase it into an uninspiring, short sentence. It’s one of many hilarious moments that highlight the great divide between languages. This inaccessibility also creates the perfect conditions for a relationship to blossom.

Coppola only had Murray in mind for the part of Bob, saying she wouldn’t have made the film without him and it shows. She fought hard for the best part of a year to get in a room with him with relentless phone calls and letters, even enlisting help from Wes Anderson—who had worked with him and Al Pacino—who lived in the same town. By the time they finally sat down together and Coppola offered Murray the part, he accepted by saying: “he couldn’t let her down.” Her determination paid off, as he would go in to say that it was his favourite film that he’s worked on. Johansson was offered the part due to her understated, subtle demeanour and maturity, which she immediately accepted with no audition.

Murray does a masterful job of balancing Bob’s emotions, being careful not to get too drawn into Charlotte but also seeking her companionship due to his loneliness. He finds the mark between being affectionate, yet respectable and their chemistry is heartwarming. Likewise, Johansson’s performance shows she’s wise beyond her years, selling it well with her husky, alluring voice and the way she smokes cigarettes. Together they portray a romance that favours emotional content over sexual gratification. Although, there is a subtle eroticism established in the very first shot, where Charlotte’s perfectly formed derrière is framed in see-through panties as she’s lying on her hotel bed.

Aside from the essential elements of the two performances, the look of the film, which has little narrative, is also paramount. Coppola and cinematographer Lance Acord put a lot of thought into the visual aesthetics, with many perfectly-framed shots of the two leads. Coppola had a very specific idea in mind, putting together over 40 pages of photos beforehand to convey it. They chose to shoot on film as opposed to video, as they felt it had more of a romantic quality. This was then enhanced further, by using high-speed film stocks to evoke a “homemade intimacy.” They were also careful to try and use as much natural lighting as possible, with light and dark tones reflecting the emotions in each scene, adding to the realism of the narrative.

As amazing as the performances and look of the film are though, it’s the music that’s the most important element for me. I’ve always thought that the combination of moving pictures with music, when done well, is the most affecting creative phenomenon and it’s these musical moments that make the film so rewatchable. The soundtrack was supervised by Brian Reitzell, featuring pieces of his created with Roger J. Manning Jr. and five tracks by the legendary Kevin Shields. It has one of the best ensembles for any soundtrack ever and also includes Air, Phoenix, The Jesus and Mary Chain, Squarepusher, Death in Vegas, and My Bloody Valentine. Coppola selected songs from her personal collection that represented that period of her life and her own experiences in Tokyo.

The tracks chosen from these artists have a lo-fi quality that runs through all the selections, unifying the soundtrack as a whole. Reitzell and Manning Jr’s pieces have an ambient, Eno-esque quality to them that amplifies the dreamy quality of the music. As part of the narrative is based around jet-lag and insomnia, they perfectly complement the scenes they’re coupled with. Special mention goes out to Coppola’s previous collaborators Air, whose aptly named “Alone in Kyoto” soundtracks Charlotte being just that. No one will deny that the cherry on top is The Jesus and Mary Chain’s “Just like Honey,” which plays in the last scene of the film and encapsulates the relationship we’ve slowly seen unfold.

In the scene, Bob sees Charlotte walking down a busy street from his taxi to the airport. After a stoic goodbye at the hotel, he feels the need to jump out and chase her down. She turns to him with tears in her eyes and they share their first and only kiss that’s firm but tender. The kiss (like a lot of the film) was unscripted and Johansson wasn’t told it would happen, so her reaction is genuine. He whispers something in her ear that’s inaudible but you can tell that it’s something reassuring, they embrace and part ways forever. You’d have to be made of stone to not be clamouring to know what he said but Coppola made the right, shrewd move of leaving it ambiguous. Why reveal it and potentially spoil a perfect thing?

The film has received some criticism for its portrayal of Japanese people. However, having visited Tokyo and the Park Hyatt myself, I can tell you firsthand that there’s nothing in the narrative that doesn’t have a basis of truth. Although, I can see how having the vapid aspects of the culture grouped together and highlighted in the space of one film could be displeasing to some. It’s clearly done as a plot-point though and others have pointed out the respectful way that traditional culture is presented. Fun is poked at American culture as well, in the form of a nauseating celebrity actress who knows Charlotte’s husband and appears multiple times throughout, as she’s staying at the same hotel. 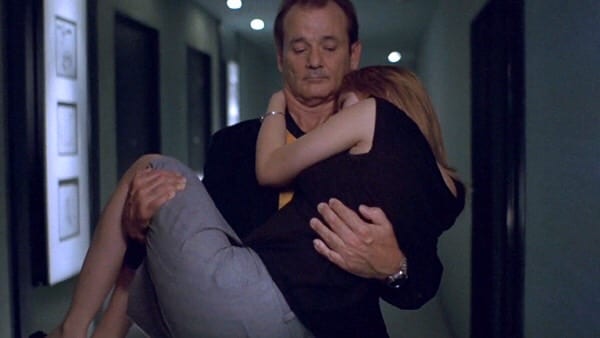 What Lost in Translation does above all else is to use its elements to harness the experience of finding love in a foreign place. I had a very similar experience myself when I went on a family holiday on a cruise ship, when I was around the same age as Charlotte. My extended family would all go to bed early and I was left to wander the luxurious ship on my own and met quite a few girls my age in a similar situation. I was already in a relationship that was fizzling out and met someone I connected with instantly; we first saw each other in the lift too and I ended up starting a relationship with her that lasted for two and a half years. It’s a hard feeling to describe when you’re wandering through quiet, thick-carpeted corridors and bars with no particular plans but it’s enchanting.

This soul-searching kind of isolation can be very moving but the overall aim of the film is to accentuate beauty for beauty’s sake. There have been countless movies through the years that try so hard to capture a portrait of love and romance and always fall short. Lost in Translation captures it without hardly saying anything at all and that’s the true power of cinema. Most think a grand gesture is the key to the heart but more often than not, it’s this kind of subtlety that can really wipe you out.