According to my Twin Peaks calendar it’s May, and I even caught a glimpse of the sun a few days ago, which means time continues to march on. So what games have we been playing to escape the stress and/or banality of our current situation?

I found the brief and beautiful 198X mesmerizing. I was transfixed to my Switch at certain points in that game. The gameplay and story merged so fluidly, and the dreamlike quality of the two literally coalescing evoked emotions out of me; real, true, fourteen-year-old kid emotions.

Then there are interactive stories where the tale is dark and disturbing in a psychological way. A lot of games on the Switch somewhat-surprisingly deal with parental abuse, suicide, social issues, sexuality, and other heady topics I’m not always prepared for—or interested in exploring—during my downtime.

While Breeder name drops a lot of hot button topics, it never quite deals with them. It’s more interested in being a standard horror tale. You play as an old man who escapes his current situation and returns to his childhood home and begins to have his memory triggered, or perhaps more aptly have triggering memories.

The game, however, is a mess. I got stuck in a conversation loop early on and I almost thought I couldn’t get out of. This meant I had to listen to the poorly written dialogue (that thinks name-dropping religion and pedophilia automatically makes it edgy) several times until I responded to a series of questions in a specific order.

The graphics are ugly, there’s no other way to describe them, and it’s not getting a retro-pass from me either. I honestly think I could make a prettier game. The childhood home you spend half the game in is amateurish. I couldn’t find my way around the house because walls obstructed my view. You had to literally feel your way against walls to locate doors and hallways to navigate the relatively small house.

So basically: bad writing, glitchy gameplay, bland and confusing graphics, and poorly designed layout. Not to mentioned this is Breeder Homegrown: Director’s Cut. So this a better version of the game? Yikes. Yeah, even for the few bucks I paid, it’s not worth it. Definitely the first game I’ve flat out said “Do not buy!” since I’ve been here at 25YL.

I recently started playing Luigi’s Mansion 3 on the Switch. I have not played the previous installments in the series, so I was going in fresh. I am already nearing the end of the game which is good and bad. Good because I am enjoying the gameplay. The puzzles are fun with just the right amount of difficulty. On the other side of the coin, Luigi’s Mansion is easy. I have only died a handful of times. The game is very generous with replenishing your health. Nintendo seemed to really target the younger audience. Regardless, I will gladly finish Luigi’s Mansion 3, but highly doubt I will ever revisit it.

I have also dived back into Magic: The Gathering. Magic is a competitive, collectible card game that originated way back in 1993. I used to cover tournaments on Twitch and have cashed a few tournaments myself. Humble brags aside, with a child in my life, I have been strictly casual the past few years. Ikoria is the new set and the draft format is excellent. If I had more free time, I could see myself drafting Ikoria at least 50 times.

Yeah, Johnny, it sounds like you stumbled across one of those “coals in the roughs.” As someone who goes out of his way to explore the far corners of platforms like Steam for weird little indie titles, I’ve been burned a few times. For every LISA: The Painful RPG there’s something like Breeder waiting around the corner. That’s the downside to indie gaming, I guess. Outside of the rare game that explodes in popularity, you never know how polished a final product will be. Thankfully, in my experience, I am usually able to find something to like in most indie games I play, but even I’ve had ones where I’m like, “Yeah, that just sucks, no two ways about it.”

It’s funny you mention graphics, too, because it seems that these days people think anything pixelated is automatically good. As you’ve shown, though, there’s a very big difference between Chrono Trigger and something like Breeder. In my experience, it comes down to how detailed the models and animations are. Something like Blasphemous is a great example of what you can do with pixel art.

Conor, I have yet to get around to Luigi’s Mansion 3, but I’m a huge fan of the original back on the GameCube. Though it was a very short experience (4-6 hours), it had good pacing and a lot of creative ideas that it executed well. I found the 3DS follow up Dark Moon to be enjoyable, but it didn’t offer the same quasi-Metroidvania gameplay I loved in the original, and it padded out the 15 hour run time with some tedious objectives. I’ve heard the third game is somewhat guilty of all this, but it’s still on my to-play list. I’m looking forward to hearing your final thoughts once you’ve beaten it.

This week, folks, in addition to plugging very slowly-but-surely away at Persona 5 Royal (I’ve got access to the second Palace now), I dove into Uncharted: The Nathan Drake Collection since it was free for all PS4 owners. I’ve beaten the first game, and am near the end of the second one, and I really have to say that I don’t think current Naughty Dog games are for me. Between these and The Last of Us, I really don’t see the hype behind the studio. Granted, I’m trying to grade the games on a curve since 2 of the games in the collection are from the first decade of the 2000s. In Uncharted, the shooting is serviceable and the environments have some decent design that allows for some cool dynamic moments here and there, and of course in the second game the loud set pieces are fun, but the stories come across as an extremely bland Indiana Jones knockoffs, with little in the way of character development despite the long slow sections. And the climbing feels like the Prince of Persia: Sands of Time trilogy if you took any semblance of challenge away from those classic action-platformers. Extended climbing sections struggle to keep my interest, and the only times I’ve failed them is when the game glitched in some way or I struggled to find the next climbing spot in time due to the visual design being unclear about what can be grabbed and what can’t be. 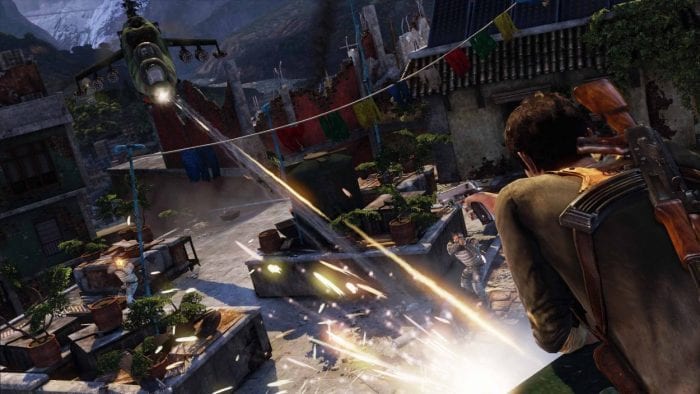 This is not to say any of these are outright bad games. None of them are. But I struggle to get invested in the stories Naughty Dog come up with mostly because they feel like something I’ve seen executed better elsewhere, and the fact is both Uncharted and The Last of Us don’t spend enough time in the slower sections getting me to care about the characters. BUT. Uncharted is also big, and bombastic—at least if the second game is anything to go by—and there’s a simple dumb pleasure to be had from its gunplay and set pieces. I plan on playing through the third game as well, but I don’t think I’ve fallen under the Naughty Dog spell. Their games always look nice, but for me, the storytelling and gameplay don’t gel to make something that really stands out.

I got Luigi’s Mansion for Christmas because I’m 43 year old man who still gets video games for Christmas. It’s a fun experience and the puzzles are fairly simple (although several still give you a sense of satisfaction when you solve them). I didn’t find the game too padded. I enjoyed clearing a floor and then wandering around looking for secrets. I never played the original, but Dark Moon on the 3DS was a fun experience and used the 3D to great effect.

The Uncharted games are weird, because I like playing them, and I find them fun (although the combat never really clicked for me through all four main games). The story has always been a mildly less fantastical Indiana Jones, and the emphasis is more on creating an experience vs. a challenging game. Yet I always feel empty and unfulfilled upon completing them. I usually spend a day going back for artifacts, or seeking alternate conversations, before walking away.

I feel like Naughty Dog games are what they are, and that I just don’t like their earnest attempts at storytelling. The quippy dialogue is always just charming enough to elicit a chuckle, but never enough to make me care about the characters. Even when these beautifully animated characters muse and brood, I still don’t find them that much more engaging than one dimensional gaming characters. To each his own. Were I a big Naughty Dog fan I might be upset about all the news regarding The Last of Us Part II (they go with the “Part II” because it’s classier like The Godfather Part II or The Hangover Part II)—but I’m not.