It’s certainly no secret that I am in love with the ’90s. I could try to explain it, but I’d go on for thousands upon thousands of words. To boil it down, there’s a certain feel to the ’90s that stands out to me. Who could ever hold those weekend-long Blockbuster benders in anything but high regard? Remember when you used to rent video games—and even video game consoles? Amazing.

Anyway, if I could give you one movie that sums up all of my emotions and explains my love of the ’90s, it has to be Mallrats. Oh boy, do I love Mallrats. Whenever I want to forget about the rest of the world, sit down, relax, and have some laughs, nothing satisfies my ’90s cravings quite like, in my opinion, Kevin Smith’s best feature, Mallrats. And with the news of Kevin Smith reaching back into the Mallrats cookie jar, why not talk about it? Let’s go.

From the fashion, the soundtrack, and the pop culture references to the almighty Brodie crushing Vancouver as the Hartford Whalers (which only happens once, maybe twice in a lifetime), Mallrats is a witty, self-conscious look at what life was like in the ’90s for most teens. I can’t imagine anybody but Jason Lee playing Brodie. Can you? You can’t. His charisma is off the charts, and his likeability is just as high. The way he can deliver those quips and witty dialogue penned by Smith is so effortless and smooth that he becomes the character, and you believe him.

By far the most memorable moment of Brodie’s has to be the “stinkpalm.” From the moment Brodie starts to explain the process to T.S., I was already laughing. The premise of even doing that to somebody is so juvenile and sophomoric, yet relatable. It’s a different style of sophomoric that’s so specific to Kevin Smith’s style of long-winded explanations and wordy dialogue, and he smashes it out of the park. It’s one of the most creative scenes in the movie, but that’s also a massive takeaway from the movie—there’s so much creativity.

We can’t talk about memorable characters without mentioning Jay and Silent Bob. They are in full effect in this outing, and after learning that the studio wanted Seth Green to play Jay instead of Jason Mewes, I am SO happy that Jason Mewes changed the studio’s mind after the first footage they saw him in. Nothing against Seth Green (he was amazing in Idle Hands and the Austin Powers franchise), but as Jay? Not a good fit.

On that note, this has to be my favorite Jay and Silent Bob appearance. Smith plays Silent Bob with a little more personality in Mallrats. His facial expressions convey exactly what he needs to, and, although he doesn’t do much acting, he wasn’t intended to. Smith chose to play Silent Bob in the first place because it just required him to be in the shot. Well, he does that and adds a little more meat to the bone with what he gave the character in this film. Also, Mewes shows from the start that he took this role seriously. Sure, it’s only a comedy, but this man put in the work. He was good enough to change the studio’s mind, and the reason why is his comedic timing, which is second nature to him.

Mewes has a knack for having the right delivery at the right moments and attacking a scene, so much so that in some moments he overshadows Jason Lee. It’s the reason why he’s so iconic in this role; he is Jay. While making Clerks, Kevin Smith said he made Jay specifically for Jason Mewes, and although he meant that in a literal way, I can see why it also works metaphorically, too. Mallrats is his best outing for the simple fact that you can see the hunger and the drive to stay in the role. Everything is done with surgical precision. 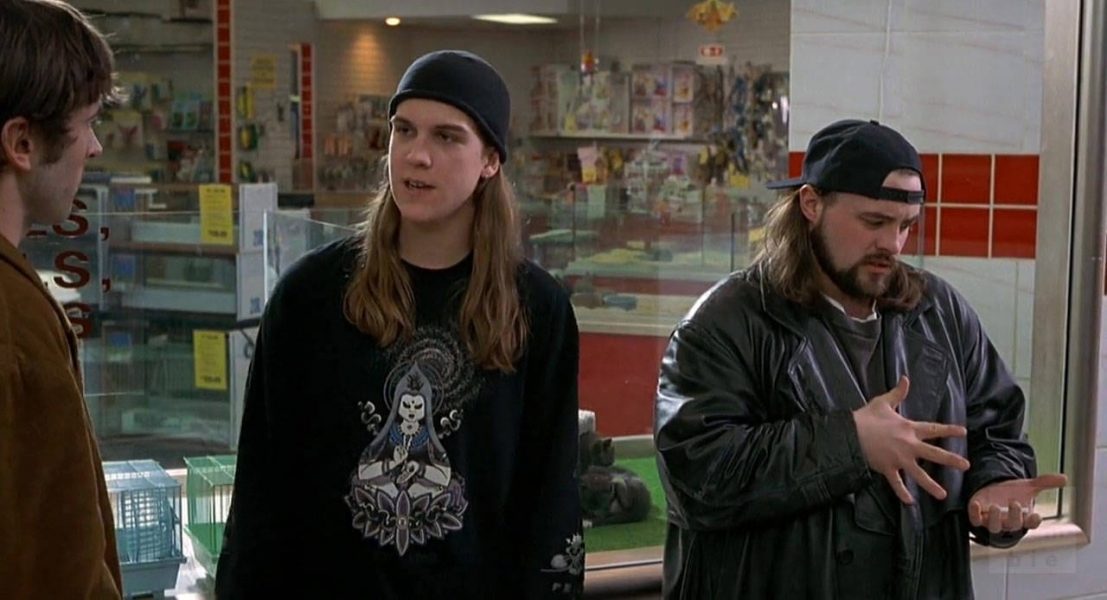 Furthermore, all of the characters have distinct voices and personalities. I could go on all day about all of the characters, but I’ll keep it simple. T.S. (Jeremy London) is a great yin to Brodie’s yang. He’s more thoughtful and deep, while Brodie is more of a face-value, blunt type of guy. We can’t forget about Michael Rooker as Svenning. He absolutely kills this role, and when Brodie gives him the stinkpalm and those chocolate-covered pretzels? Gross, but a classic moment.

What makes the chocolate-covered-pretzels scene so effective is the shock factor. You just watched Brodie shove his hand down the back of his pants, and now he’s grabbing Svenning’s graduation ring and giving him a pretzel. And the smear—oh God, the smear. The sound effect of the sliding pretzel and the obvious parallel between the chocolate and, you know…is stomach-churning. It all meshes into one gross, hilarious, and well-planned scene that hits like a ton of bricks and makes you laugh as you feel nauseous. Also, the most iconic line said in the movie: “Saaayyyy, would you like a chocolate-covered pretzel? They’re melty, but damn are they exquisite”. Now that’s a piece of dialogue only Kevin Smith could write.

Speaking of dialogue, Mallrats is filled to the absolute brim with great dialogue. The way Kevin Smith writes his conversations between characters is, yes, wordy, but it works. For any aspiring writer (such as myself), Smith always reminds us that the “rules” of writing are blurry and subjective. His characters feel like real people. That’s the biggest draw of watching a Kevin Smith film. He writes the characters with the knowledge that the audience isn’t dumb and even throws some in-jokes for his audience into the mix.

For sure, a prime example of Smith’s dialogue is the Kryptonite condom discussion between T.S. and Brodie. It switches directions perfectly to a debate about if the cookie stand is a part of the food court; it’s hilarious and real. Only Kevin Smith could make conversations like these interesting enough to be standout moments in a film. He connects with the viewer because he knows his viewers. Don’t get it confused with pandering, because it’s not; Smith, without a doubt, has conversations like these with his own friends.

Stan Lee has an incredible cameo in Mallrats. He walks up behind Brodie while he’s standing outside of a lingerie store, and they get to talking until Brodie finally realizes that he’s talking to Stan Lee and freaks out. After mentioning love and couples for the second time, Stan tells him about this woman he loved and how much she means to him. It clicks in Brodie’s mind, and Stan Lee walks away only to be stopped by T.S. and thanked. Turns out Stan Lee was just telling Brodie a comic book storyline, and it wasn’t even real. It’s kind of poetic, if you think about it. Years later, Stan Lee paid homage to Mallrats with his cameo in Captain Marvel as a subway passenger reading the Mallrats script. Personally, this is Stan Lee’s best cameo, and if you haven’t witnessed it, you’re missing out. 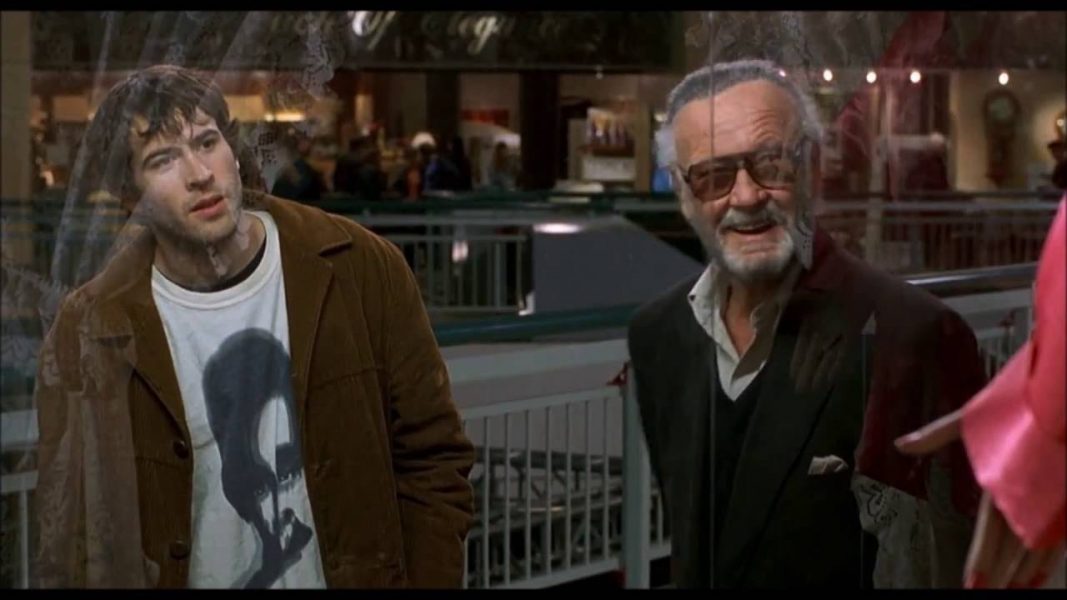 At its core, Mallrats has a constant, albeit lightly coated, flavor of love injected into it. T.S. originally goes to the mall with Brodie to find refuge until he finds out that the dating show his girlfriend Brandi is supposed to be on is being filmed at the mall. From there, it’s about sabotage and getting her back—simple. I find that Brodie has more of a compelling journey here when it comes to love. He finds out that his girlfriend Rene is seeing Ben Affleck’s character, whom Brodie despises. This sets off a few altercations, sex in an elevator, and jealousy on Brodie’s part. I’ve always thought that Mallrats was more for telling the story of T.S., but the more I watch it, the more I think it focuses on Brodie. Some might say it’s a buddy comedy, and while I mostly agree, Brodie seems to be the main protagonist.

Mallrats serves as a time capsule of the ’90s. Obviously, the aesthetic is there, but, it’s the feel of the movie that really stands out. You know when you have a song tie back into a specific memory of yours, and every time you hear it, you’re brought back? That’s what Mallrats is to the ’90s. If you look around in the backgrounds of shots, there are little nuggets of ’90s culture and overall style. From the store signs to the mall’s energy, the whole environment is alive. It’s intangible, sure, but it’s comforting. It’s set in a time where smartphones and social media weren’t running rampant and everybody seemed a little more approachable. If this specific movie was made in today’s world, I highly doubt that it’d be a fraction as charming.

Now, when Mallrats first arrived in theaters, it tanked. It grossed $1.1 million in its opening weekend and only dropped with every week from there. Overall, the movie made $2.1 million to its $6.1 million budget. At the time, it just didn’t hit, and it definitely put a damper on any major studio’s interest in obtaining Kevin Smith’s direction for any future projects. With that said, it was probably for the best. Without Mallrats, there would be no Chasing Amy, and that’s a world I don’t want to live in.

At the end of the day, Mallrats is growing in popularity every year, and it doesn’t seem like it’s going to stop soon. You can’t dismiss its charm from the moment it starts. It’s a well-rounded, well-written, sophomoric sophomore feature from Smith. Although the movie bombed, this is Kevin Smith at the height of his powers, and if you haven’t seen it, you must give it a watch; you won’t regret it. Mallrats is, without a doubt, Kevin Smith’s magnum opus. 25 years later, Mallrats is only getting better.