It’s an interesting experience being a Rick and Morty fan, particularly when at least half of your group is characterized by being one of the most toxic and hateful on the internet. You don’t have to go far to find aggressively vitriolic posts from the fanbase either insulting non-fans for “not getting it” or putting creators Dan Harmon and Justin Roiland on blast for the show not going in the direction they feel it should go.

After an extended midseason hiatus, the sixth episode of Season 4 feels in part like a reminder that they are not beholden to the whims of the fans, and this is their creative vision, not ours. That’s probably the most Dan Harmon thing ever, and it’s exactly why we should trust him.

The uproarious “Never Ricking Morty” was worth the wait. In what appears to be Season 4’s iteration of the “anthology” episodes (e.g. “Interdimensional Cable”), Rick and Morty find themselves on a train—but not just any train, a “literal literary device” racing through space as well as different storylines and realities. They’re essentially trapped in an anthology episode, instead of flipping through the Interdimensional Cable of their own volition. Rick is having none of that, and immediately begins trying to “derail the continuity.”

Rick produces a map of the tracks, which is a complete circle. Rick openly lambasts the circle before quickly outlining the forthcoming plot. “Of course this thing is just a f***ing circle,” he grumbles. “You’d think it was so GD complicated…” This is a reference to Dan Harmon’s style of storytelling called a “Story Circle,” which essentially breaks down the Hero’s Journey sequence of events into a digestible format. What follows is a relatively standard narrative structure that takes multiple detours and segues delivered by way of a constant, extremely meta deconstruction of storytelling mechanics. However, it maintains the improvisational anarchic tempo of those anthology episodes.

It’s by far one of best episodes of the show, easily standing near my all-time favorite of the series, “Total Rickall” (Long live Mr. PoopyButthole!). It doesn’t advance the overarching plot much (which is fine and happens every few episodes), but freewheeling creativity is one of Rick and Morty’s most distinctive features—and the way this episode examines the storytelling process is just a more direct process of analysis that it’s always done.

The episode hits the ground running during a confrontation with the ticket collector, Tickets Please Guy, who is sucked out of the window during the fight. The man wakes up at the arcade venue Blips and Chitz, revealed to have been playing a round of the virtual reality game “Tickets Please.” The man has a sudden and violent existential crisis before he’s torn in half back on the train, causing his top half at Blips and Chitz to detach from his legs and spin in the air spraying blood everywhere while both versions of him remain agonizingly alive, and according to Rick, “suspended in disbelief, slowly dying while living out an alternative non-diegetic reality.” So right from the start, this episode is implied to be removed from the actual world of Rick and Morty, whatever that actually means. 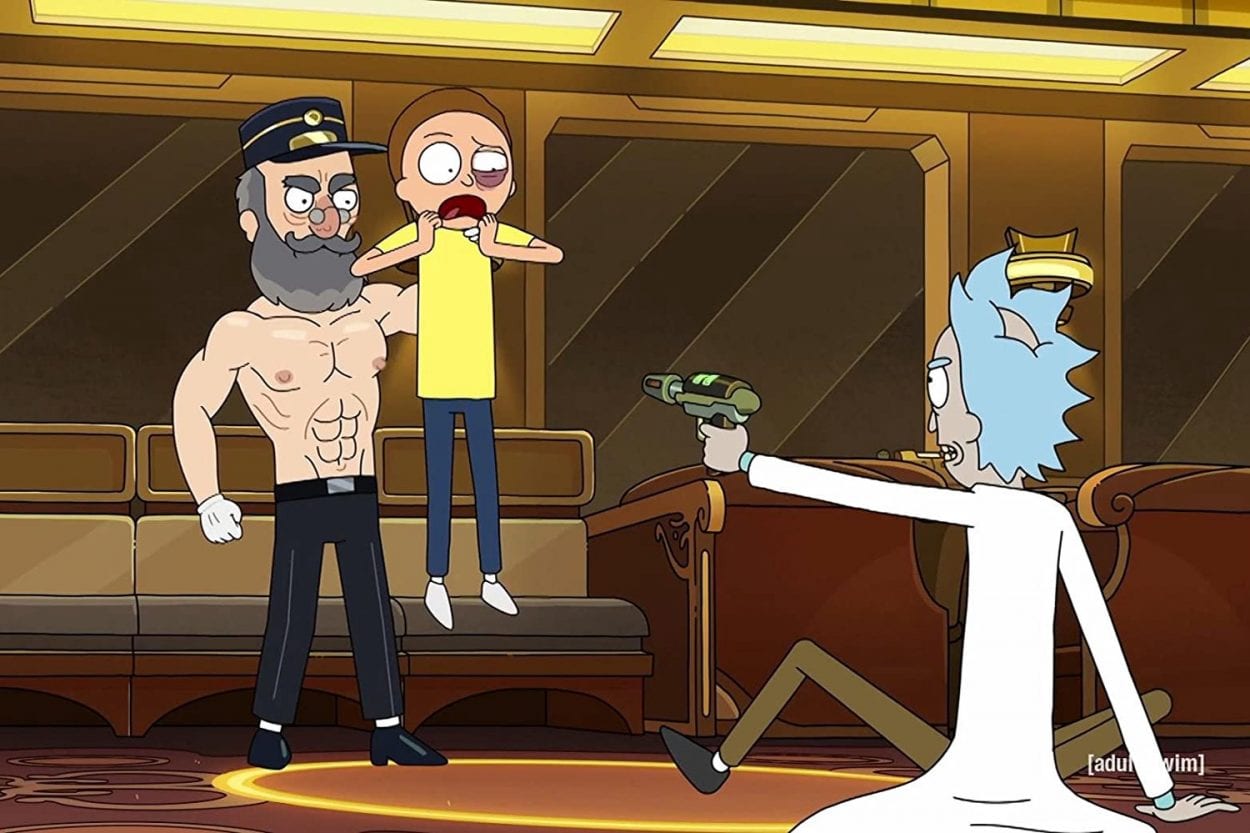 In order to break the “thematic seal” and reach the engine before the “ticking clock” on Morty’s suit counts down to the suit’s failure, Morty needs to come up with a story that passes the Bechdel test—an unofficial barometer of a story’s ability to feature two named female characters that have a conversation in which they discuss something other than a male. Morty’s story clumsily involves Beth and Summer both on their “heavy special time” and harnessing that power to fire rainbows from their crotches to kill giant female scorpions (and subsequently receiving a congratulatory phone call from Ruth Bader Ginsberg). Absurd, but it does indeed pass the Bechdel test. Both that test and the ticking clock are verbally called out by the characters, continuing to deconstruct the very process of constructing a narrative.

The writers on the show know how much this sort of episode is going to irritate the more toxic fanbase, with Rick making multiple verbal references to “one-offs” and calling out this very episode as “uptight and over-written,” indicating a clear self-awareness of some of the complaints of Season 4’s less serialized flow. It’s understandable to a point, given that the earlier seasons featured some solid world-building involving the overarching multiverse. Since then, the show has often set that aside in the interest of more self-contained, meta episodes. Ironically, one of the best episodes of the series, “The Ricklantis Mixup,” starts as a self-contained trip to Atlantis but immediately detours into an extremely dark, dystopian and ostensibly canonical story featuring other versions of the pair.  That in itself is a meta deconstruction of the typical R&M setup, a pivot from the normal wacky adventures into something wholly invested in a larger overarching narrative. It’s the show’s M.O. to consistently subvert its own narrative trappings.

Rick and Morty has always been meta—Rick often breaks the fourth wall and mentions different television show trends—and the fact that “Never Ricking Morty” leans so hard into that doesn’t have to make the element mutually exclusive from the long-form storytelling and character development of seasons past. It’s worth pointing out that at the conclusion to the Season 4 premiere, Rick and Morty enthusiastically agree to a give-and-take: sometimes doing some normal stuff, and sometimes going fully wacky. “Never Ricking Morty” is the latter, and doesn’t mean that the show is entirely abandoning the world-building on a larger scale. Towards the end, Rick even favorably mentions that they “got that meta-canon s*** out of the way so we can just be ourselves.”

In the climax of the episode, Rick and Morty battle Story Lord, and during the fight are exposed to a number of alternate realities that challenge whether they are living those lives having awoken from a nightmare about being on a train. Rick insists that the “one truth” is that they’re on that train. Story Lord begins leeching from their “limitless potential” to craft his own story—ostensibly Story Lord is an audience surrogate, expecting and demanding the writers of the show (whom Rick and Morty represent here) continue to crank out exactly what they want. As Story Lord tortures our heroes, events and scenarios are extracted from them. “Is any of this canon?” Morty asks. “It could have been!” Rick replies, implying that these scenarios are potential plot threads in the actual show that are being actively discarded by the writers.

That brings us to Evil Morty.

Ever since Evil Morty was introduced in “Close Rick-Counters of the Rick Kind,” Rick and Morty fans have been anxiously awaiting a conclusion to the villain’s arc. The final scenario Story Lord pulls from Rick in this episode shows an aghast Rick and Morty standing before an army of Ricks, Meeseeks, and Gazorpians, headed by Evil Morty and Evil Mr. PoopyButthole, in a perceived apocalyptic final showdown. It appears to be the general consensus that since this scenario shows up in the string of non-canonical events, the writers are signaling their intent to drop the Evil Morty storyline entirely. I disagree; it seems to be that Harmon and Co. are actively messing with us by teasing the idea of jettisoning Evil Morty, because Rick and Morty absolutely thrives on riffing on everything, from sci-fi pop culture to fan expectations. I believe that were the show to do away with Evil Morty, it would be much more direct about it.

Rick abruptly begins leading Morty in prayer, professing his belief in God and summoning versions of Veggie Tales and other animated children’s Christian programming characters, which destroys Story Lord’s extraction machine. This is obviously the absolute last thing Rick would ever do, and it successfully traps Story Lord in the Bible dimension with an impeccably muscular Jesus Christ, because, as Rick says, the Bible is “every writer’s hell.” When Morty stresses over what a cheap shot that kind of joke is, Rick points out that them being saved by Jesus is technically not offensive at all—yet another instance of commenting on the creative process and how consumers react to it. 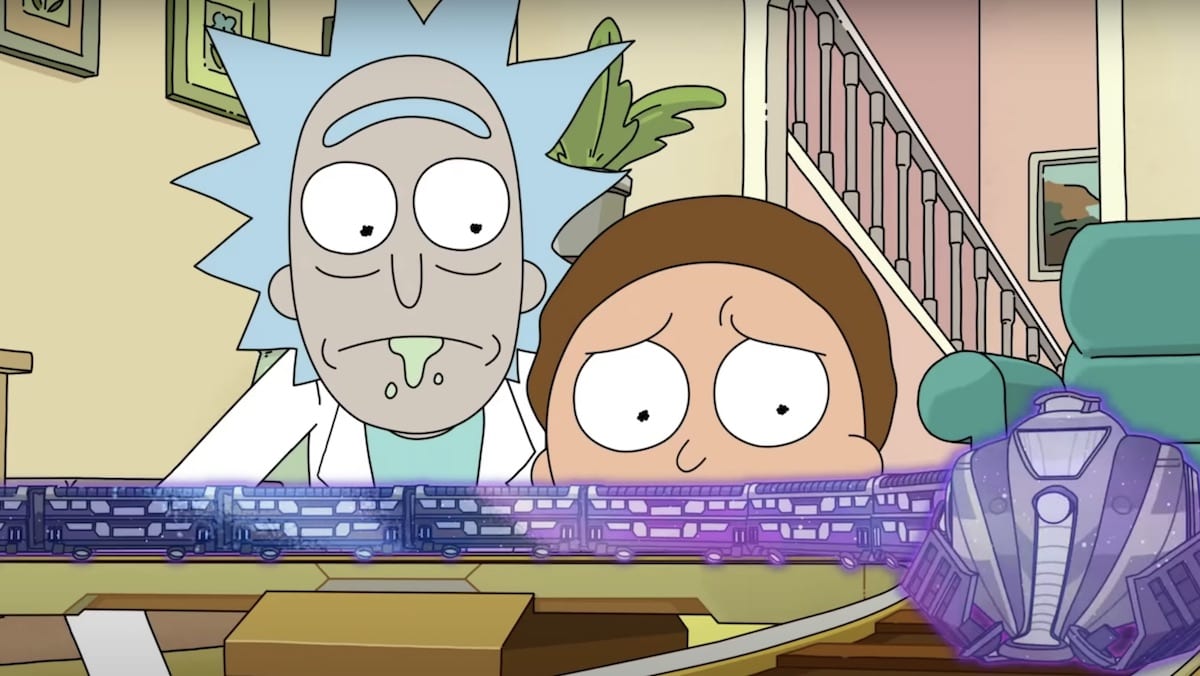 There’s one final rug pull at the end, where it’s revealed that the entire episode took place on a toy train that Morty, in the “real world,” bought for Rick. Rick is overjoyed at this, and delivers a speech stating his love for money and buying stuff: “your only purpose in life is to buy and consume merchandise…you looked straight into the bleeding jaws of capitalism and said ‘Yes, daddy, please.’” It’s one more nihilistic stab at the state of media in general and how often it exhibits a soulless drive to sell more merchandise, and a suggestion that nothing really amounts to anything in the Rick and Morty universe as long as you keep buying those Funko Pops.

What “Never Ricking Morty” ultimately proves is that the series is not beholden to any format or storyline. Rick and Morty is a deeply subversive show, and “Never Ricking Morty” tackles the very process of storytelling. To assume anything about the show’s future and where the plot will go from here is pointless, because if three and a half seasons of the show have taught us anything, it’s that anything is possible.

Maybe Evil Morty is gone for good. If so, it plays directly into the show’s inherent nihilism by casually deleting a momentous buildup. “Nobody exists on purpose, nobody belongs anywhere, everybody’s going to die,” as Morty says earlier in the series.

If not, Dan Harmon and his writing team just played us all—exactly like they’ve been doing since the pilot.

Regardless, though; can we all agree on the uncut glory of that affectionate musical interlude starring Rick and Birdperson? 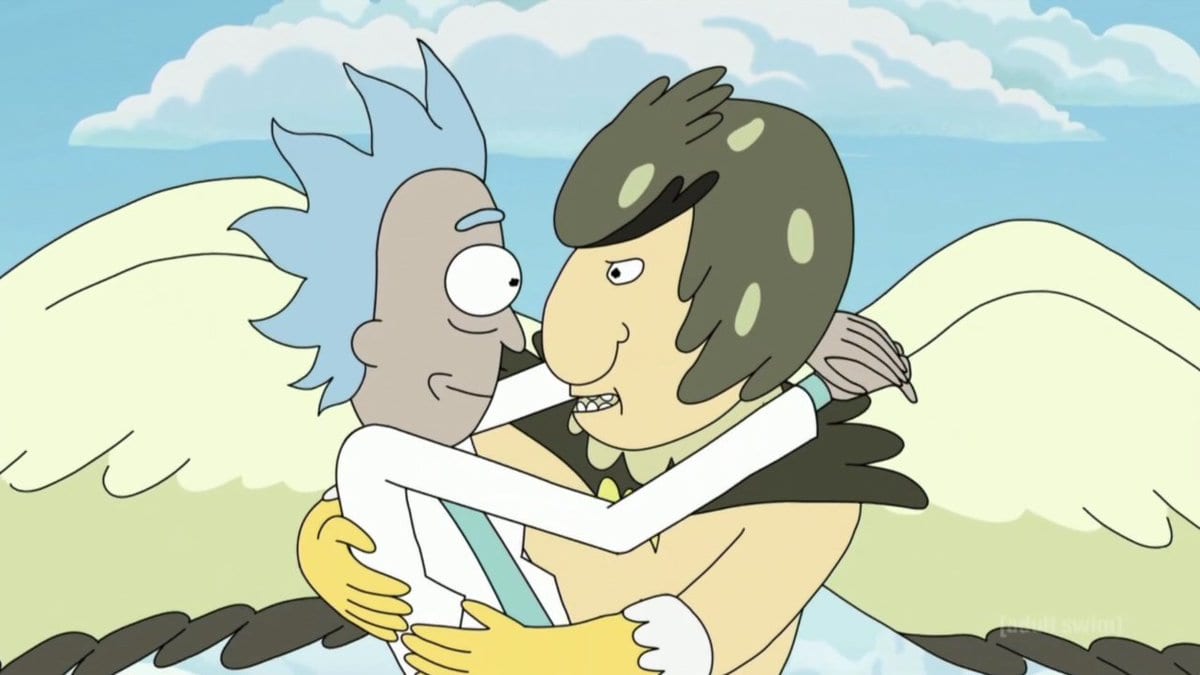