Let’s just say it. The subgenre of redneck crime films is a messy place. The “black hat” is almost always a crazy SOB engaged with a less crazy SOB “white hat.” Slickness is replaced by stains. Dazzle is replaced by dinge. Calling any of them “sagas” is too much credit and heft. Unless you’re the Coen brothers (and even if you’re them too), spicing up this slow-and-low movie barbecue takes some of that absent slickness and dazzle injected into either the filmmaking or storytelling departments, or both.

Bumped by a cancelled SXSW, Arkansas has about half of that needed relish, but you sure wouldn’t know it from the first 20 to 30 minutes. Liam Hemsworth’s lead Kevin, with his Kris Kristofferson starter kit, dives right into a tough-talking and half-hearted voiceover putting down the so-called organized crime scene as more of a “loose affiliation of deadbeats and scumbags” than any kind of Dixie Mafia. By the time Kevin hits the “I’m a drug dealer” exclamation point in his limping introduction, this kind of overly obvious narration hits the groan-inducing Scorsese-Lite territory. 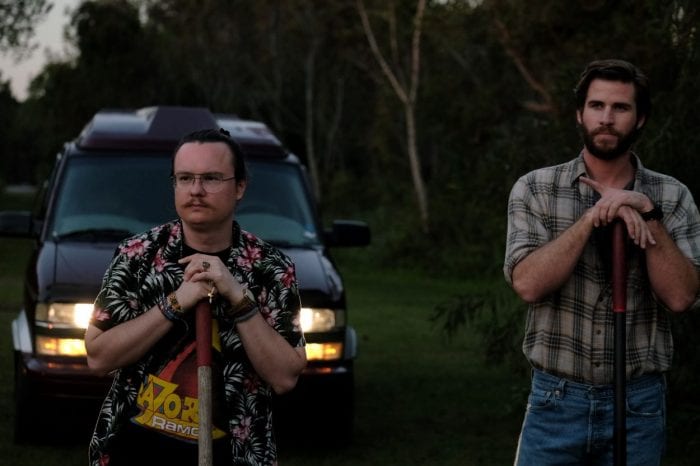 Kyle is testy, impatient, and claims to have no feelings so that he can’t have hard ones when such moments usually call for them later. He spouts attempted codas, but the character’s self-appointed lack of life-defining philosophy makes for zero pathos. This dearth tends to be why most of these redneck crime movies are weak sauce. Kyle’s acquired partner-in-crime hopes to add a little flair to the “strong silent type that talks too much.”

That’s Swin, played by the film’s co-writer and director Clark Duke, with a query or a comeback for everything. He saunters with tacky wit and even tackier clothes. His long mane tops a doughy face with a pubescent mustache that somehow scores the smitten affection of local cutie Johnna (Eden Brolin of TV’s Yellowstone and Beyond). Swin and Kyle together aren’t convincing brains or brawn to any operation. Their pickles create a body count and fewer dollars for the unseen higher-ups. 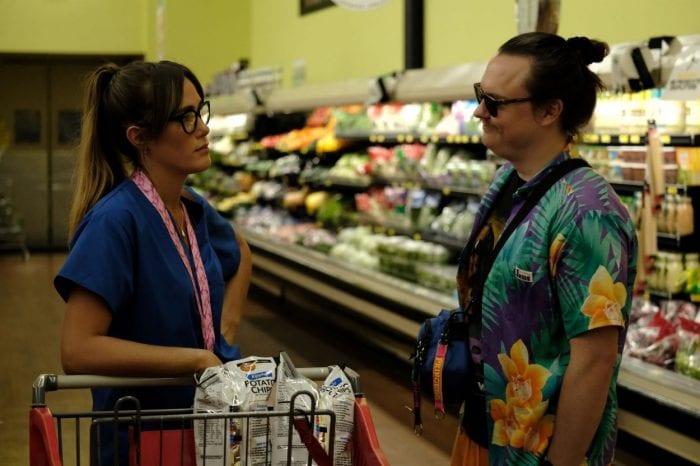 Relying on other people is the fastest way to end up dead. Another way this is said in Arkansas is “it ain’t smart to f**k around with people you don’t know.” When push comes to shove, only one person fits at the end of a knifepoint or a gun barrel at a time. Teamwork or a volume of slotted underlings can make a crime network and bring strength in numbers, but few of those moving parts ever bail another one out when asses and lives are on the line.

Where the potent kick for Arkansas finally hits is in its villain. Vince Vaughn dominates this film in a reserved, yet resplendent performance as Frog, the man who may or may not be the kingpin of all drug-running gambit behind the Rackensack curtain. Arkansas, based on the flashback-filled 2009 novel of the same name by John Brandon, is comprised of five labeled chapters, several of which chronicle the history of Frog’s looming presence.

Vaughn, in every way, makes it look natural in The Natural State. Frog’s exterior shell may be loud with those hideous shirts, vests, and bolo ties provided by up-and-coming costume designer Ashley Heathcock, but the actor’s heat simmering behind his lanky posture and signature drool smirk has bite better than any moonshine. Vince is on a roll maturing from his former manchild prime on the indie scene. He’s the reason to pack a VOD bag and visit Arkansas.

If Vince Vaughn is the slickness, then the uncommon artistic choices of Clark Duke, in his debut effort as a writer and director, are the dazzle. The feel of the movie and its chapters are spicy thanks to top-notch editing from Green Book Oscar nominee Patrick J. Don Vito. Cinematographer Steven Meizler (The Last Five Years) uses unflashy lighting with whips and pans spun all over the stellar location scouting of Joshua Crane and the designed hayseed gaudiness from Scott Enge. The setting may be simpleton, but the chops are not.

The most inspired finishing touch is the soundscape. Arkansas is filled with a soundtrack of re-spun country standards performed by The Flaming Lips and stylish score by the team of Devendra Banhart and Alexander Taylor. The ’80s-era rockers count as quite a get for Duke and their covers of Johnny Lee, George Jones, The Gatlin Brothers, and Hank Williams Jr. turn the honky and wonky into something twisted and sublime.

The movie likes to talk about “inconsequential falsehoods” while being one itself.  None of that offbeat style can save a meandering and mild story. It has the starting pace of a forced road movie and the ending whimper of an unfulfilled romance. No one in the movie nails their presence quite like Vaughn does, and you want more Frog every time the unsophisticated narrative drifts back to Kyle and Swin. He is given true roots over everyone else

Whether it’s Duke and co-writer Andrew Boonkrong, the source material, or both, this movie wavers wildly in tone and purpose. What could have been a menacing mystery ends up being little better than a quirky pickle or two. The movie drops a quote that inadvertently sums up its engagement stating “It’s better to have something to do, then to have something to do look for you.” Someone needed to give this movie more to do.

DON SHANAHAN is a Chicago-based and Rotten Tomatoes-approved film critic writing on his website "Every Movie Has a Lesson," our offshoot of Horror Obsessive, and also on Medium.com publications. As a school educator by day, Don writes his movie reviews with life lessons in mind, from the serious to the farcical. He is a proud director and one of the founders of the Chicago Indie Critics and a member of the nationally-recognized Critics Choice Association and the Online Film Critics Society.