I think that it’s fair to say that the current state of the world has made us all think—about those we love, regrets, the future, and about how much life is going to change after all of this. When Covid-19 first made its presence felt in the western world, my first thoughts went to how fragile this whole thing we call civilization actually is. The cases of infection reported had barely reached five in the UK before people began panic-buying, and even before the lockdown, the economy took a nosedive into the toilet as soon as the illness reached our shores. It all was a major wakeup call about everything we take for granted, how easily it can all come crashing down.

Way back in 1995, life seemed so much simpler. All we had to worry about was Blur versus Oasis, or how to avoid thinking about terrible genocides in far-off countries reported on the news. Before that, a lifetime ago it seems, we had the Cold War. Tensions between Russia and the western world were always present for much of the previous generations’ lifetimes, and they knew that nuclear annihilation was a very real possibility thanks to the fearmongering of the time in the media. Movies didn’t help this tension in any way, as every other piece of genre entertainment seemed to take place in the aftermath of a nuclear war or revolve around this looming possibility.

Crimson Tide, released in early summer of 1995, is a film that is very much about how fragile the threads are that hold everything together. We begin with a credit sequence that tells us that a now-peaceful Russia has been rocked by some hardliner separatists who have attempted some kind of coup and seized control of Russia’s nuclear arsenal. The separatists are making a lot of anti-American noise, and so the U.S. mobilizes its nuclear submarines. We then meet young, idealistic family man Lieutenant Hunter (Denzel Washington), who is summoned when the existing second-in-command of the USS Alabama comes down with appendicitis. The commander of the Alabama is Captain Ramsey (Gene Hackman), a no-nonsense, old-school military lifer. 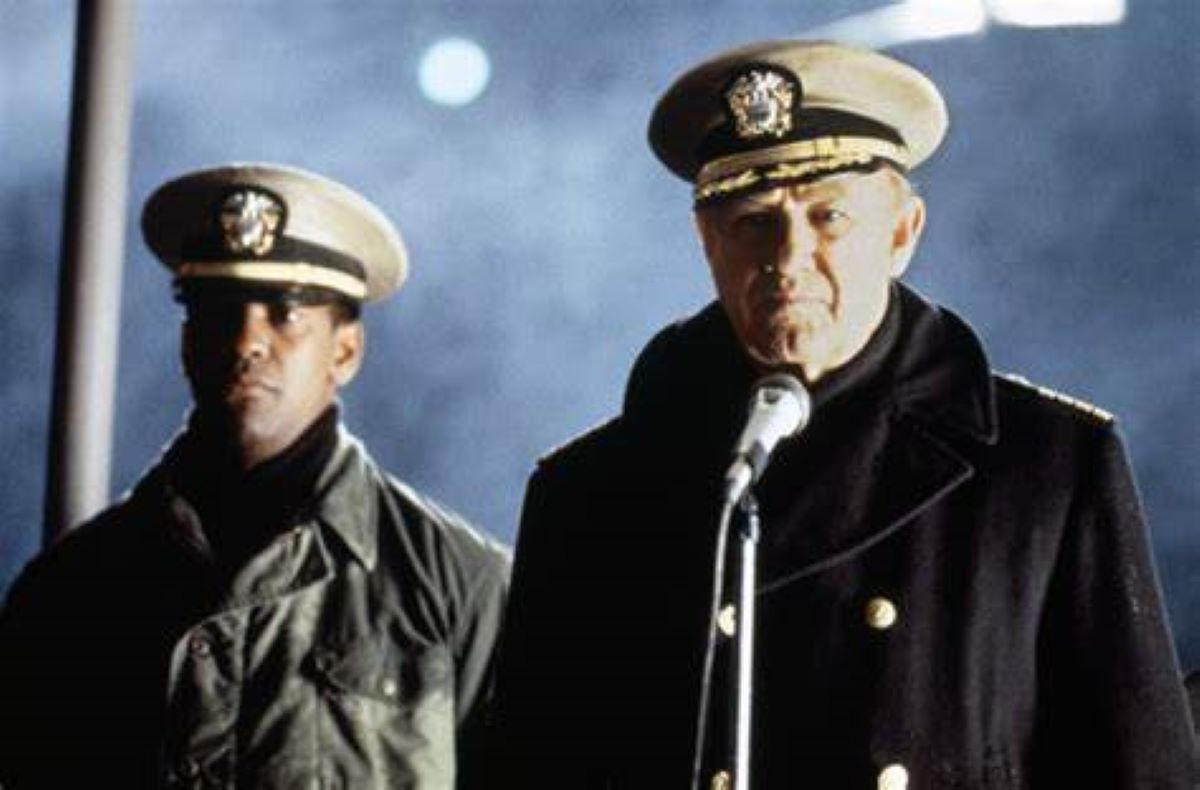 Right from this meeting onward, the tension begins to build. At the first meeting between Hunter and Ramsey, Ramsey makes sure to inform Hunter that the replacement list he was on was a short one, in an effort to ensure Hunter knows his place. An early dinner conversation between those in charge of various departments only serves to highlight the key differences between these two men. Hunter is Harvard-educated, versed in philosophy and politics, while Ramsey is a man who follows orders unquestionably. The cracks begin to appear when Ramsey starts a nuclear-missile-launch drill after a fire has broken out on the submarine. Ramsey begins to exhibit some kind of inferiority complex toward his educated second-in-command when Hunter questions the captain’s decisions. The difference is highlighted by Hunter believing the crew needs a “pat on the back” and Ramsey favoring “a kick in the ass.” It feels as if Ramsey goes to aggression and orders in the face of his inferior’s superior intelligence.

When a battle with an enemy submarine leads to a disruption in communications, a message from the U.S. military is interrupted. The previous message indicated that it was time to prepare the nukes for launch, and the next message following that is cut off. A major disagreement occurs with Ramsey wanting to launch against Russia, and Hunter insisting that they wait for further communications from command. Hunter relieves Ramsey of duty, and a split occurs within the crew between those loyal to Ramsey and those favoring a cautious approach to potential armageddon.

Up to this point, the late Tony Scott was known for big, loud, and visually dynamic action movies usually produced by Don Simpson and Jerry Bruckheimer. With True Romance in 1993, Scott added considerable variety to his career by working with a better screenplay than he was used to, written by Quentin Tarantino. That he followed True Romance with Crimson Tide makes a lot of sense in terms of where he was in his career. Aside from the rain-drenched boarding scene, there really isn’t any of Scott’s visual flair present in Crimson Tide. Instead, we have sweaty men in cramped rooms having conversations that test their loyalties, and the stakes have never been higher.

Thanks to the performances by Washington and the legendary Hackman, we are right there in the shoes of these individuals. We feel the anger building, feel the tension rise right there in that recycled air deep below the ocean. The two leads are backed up by brilliant turns from James Gandolfini and Matt Craven, as well as an early one by Viggo Mortensen. It may feel a little stagey at times, but Crimson Tide is never less than cinematic in terms of how it makes you think, and the script by Michael Schiffer (with a polish by Tarantino) crackles with flawed humanity on the verge of panic. 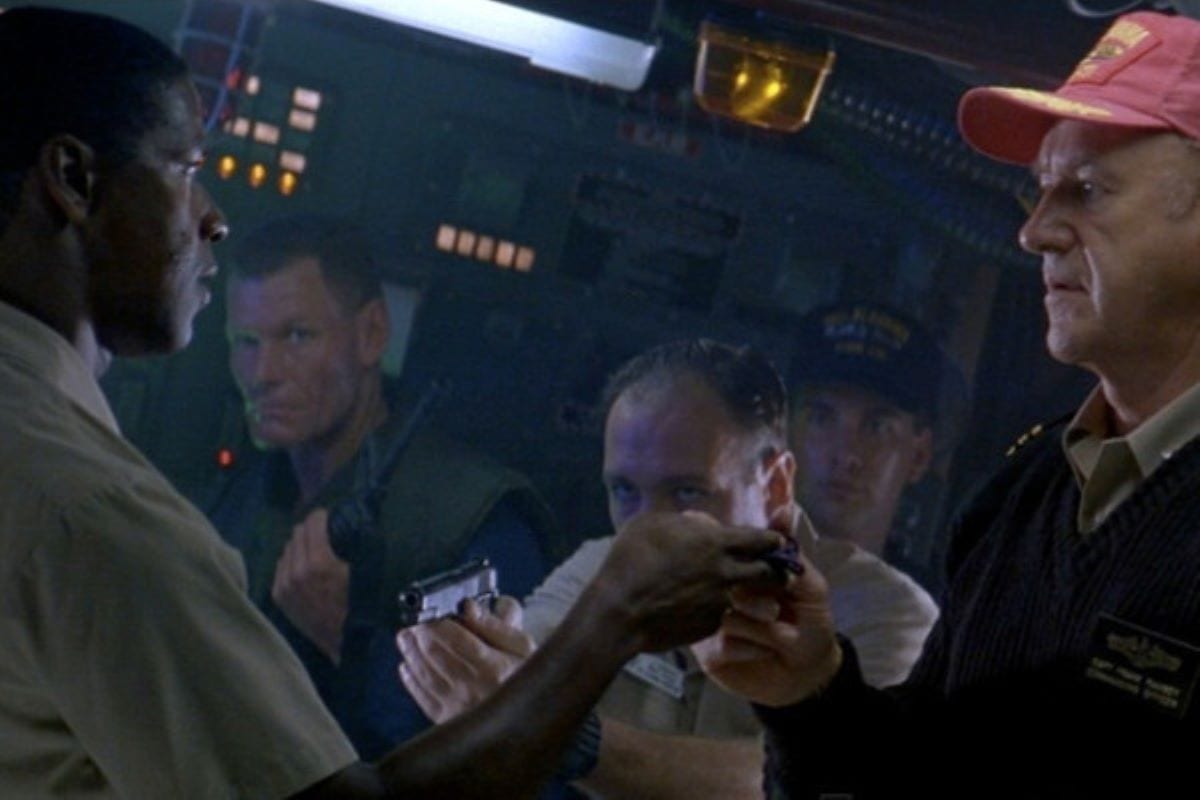 The U.S. Military refused to be involved with the production of Crimson Tide for the negative portrayal of their servicemen. Ultimately, though, Crimson Tide is all too believable, even more so in this current day and age when we constantly seem to be at the mercy of deeply flawed, ego-driven men in charge of our fates. All it could really take is a disagreement between two egos to end it all. We would like to think that cooler heads will prevail, but humanity hasn’t really given us the faith to think that this will be the case.

The ultimate flaw of Crimson Tide lies in its finale. We reach a comfortable conclusion, and it feels too comfortable, too neat. Ultimately, the cost has been two punches to the face, a reveal of deep racism in one character, and then a military ticking off. It feels like kind of a misstep, but it may just be a product of where cinema was at that time. I think if Crimson Tide came out now it would have a far more bleak and cynical ending. There you go, though: 1995 was a golden age compared to now, and yet Crimson Tide holds up as one of the superior thrillers of the ’90s. It remains one of Tony Scott’s best films. It’s a reminder that this was one helmer of studio fare who could elevate anything and is sorely missed.