For something like Capone, let’s talk about faculty, which can span natural aptitude all the way up to powers of the mind to function, act, or do. In any film, you have the faculties of the character conveyed through the faculties of the performer. Both have their strengths battling weaknesses and limits challenged by embellishments. That is precisely the dichotomous duel of Josh Trank’s new film with the enigmatic Tom Hardy in the title role of Alphonse Gabriel Capone.

That’s ballsy if you can squeeze something out of it. Warts and all, what you get in Capone is the character and historical figure at his most lost and worst. The past pizzazz has parted. You also have an actor taking that lethargic material and hammering that reduced stature into the ground with all of what he does best through his own well-documented propensities. This film takes ominous creative license to chronicle Al Capone’s final year of prison release “retirement” life.

Failing faculties is the swamp of this setting. Read the encyclopedia entry of his decline and 1941 death. It’s the only research you need for this lesson. By the weathered age of 48, the only cocktail coursing through his veins is a bacterial and biological one made of one part syphilis, one part paresis, two parts stroke, and a highball glass filled with ice made of dementia. He is a nutty old man telling incomplete stories while still trying to look tough and dress sharp. What was gregarious manliness has been reduced to childlike feebleness.

Rightly so, the mess is portrayed as a mess. Tom Hardy adds to his trophy case of odd voices and vast audio library of grunt variations. If you can handle Jeff Bridges talking through red-assed marbles as Rooster Cogburn or Nick Nolte just plain talking, you can handle the characterization of the fellow career-mumbler in Tom. But it’s more than wild vocal trickery. It’s the chosen skin Hardy puts those utterances within. Every wet cough, cigar drag, or shouted spouts of Italian threats spew from a permanent glower and ring a little glimmer of the menace that used to reside in that hulking shell before it was wrapped in a feces-soaked robe. 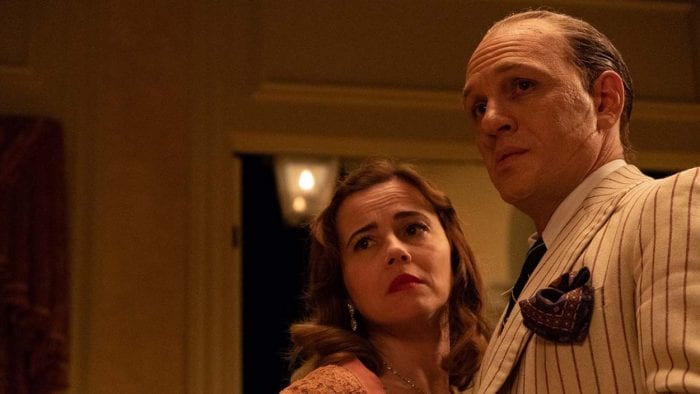 Under the sun and next to the neighboring gators, “Fonz” is surrounded by many presences at his mansion in Palm Island, Florida (filmed gorgeously in Covington, Louisiana). To his beleaguered wife Mae (Linda Cardellini), his heir son junior (Noel Fisher), and a herd of cluelessly playful grandkids, he’s a dithering embarrassment. To just about everyone else, Capone is a target for whatever residual riches are attainable. No less than his personal physician (Kyle MacLachlan), his former mentor (Matt Dillon), a smattering of surviving in-house lieutenants, and a host of wire-tapping federal agents in the neighboring trees poke and prod the fading felon for spilled secrets to his supposedly hidden millions.

No one will find this invisible treasure because Capone’s mind is a transitory and temperamental fever dream of grandiose visions. With high credit to costume designer Amy Westcott (Black Swan, The Wrestler) and production designer Stephen Altman (Ray, Gosford Park), much of Trank’s lush yet seedy film fleshes out the episodes of imagined former ambiance and the mental scars cut from a life of cruel violence. Capone puts you in that cobwebbed head and all its unpleasantness, set to a sparse (too sparse, really) score from rapper El-P. It takes creative courage to emphasize all of this foreboding filth over the flashy flair normally associated with this mythic mobster.

For the title character, there is no blaze of glory or sunset ride. A sawed-off carrot replaces the Cuban cigar in his craw. No legacy awaits as his family avoids him and will soon change their cursed surname whenever he croaks. Short of his slowly sold-off mansion of shrinking amenities, there is barely a silver living for Al Capone’s final year. All that fills his ending existence is the disgusting debilitation of failing health and the mounting regret of lost memories.

Considering the prominent figure, that is a wicked amount of indignity as punishment and comeuppance. Josh Trank (Fantastic Four, Chronicle), unfortunately, knows something about that himself during his own precarious career arc. This is a bold place to assert himself and hitches to the right star to paint this darkness. Tom Hardy sweats, seethes, and pants with a performance of pain that has to be seen to be believed. Once again, there’s no romanticism in this not-so-flippant take on Al Capone and that’s altogether fitting.