Welcome to What’s the Buzz, 25YL’s feature where members of our staff provide you with recommendations on a weekly basis. In our internet age, there is so much out there to think about watching, reading, listening to, etc., that it can be hard to separate the wheat from the chaff, filter out the noise, or find those diamonds in the rough. But have no fear! We’re here to help you do that thing I just described with three different metaphors. Each week a rotating cast of writers will offer their recommendations based on things they have discovered. They won’t always be new to the world, but they’ll be new to us, or we hope new to you. This week, Caemeron Crain has Puscifer “Apocalyptical” on repeat, Hawk Ripjaw is watching Train to Busan, and Brien Allen recommends ListenToAMovie.com.

Caemeron: This past week Puscifer released their first new track in five years, “Apocalyptical,” along with an accompanying video. I love the band, I love the song, and I love the video. Let’s break it down.

If you don’t know Puscifer, they might be most easily described as the project of Maynard James Keenan, lead singer of Tool and A Perfect Circle. That downplays the contributions of other members of the band in an unfortunate way, however. While it is true that there has been something of a rotating cast, Carina Round and Mat Mitchell seem pretty core to the group at this point, and I want to respect what others have put into this project as well.

That said, Maynard was clearly the draw for me. I have been a pretty hardcore Tool fan for some 25 years now, bought A Perfect Circle’s first album as soon as it came out, and have been following Puscifer since they got going in 2007 (or the mid-90s, if you want to be Mr. Show about it).

I saw them perform at the Apollo Theater in 2010, and it was amazing. They opened for themselves, as a fictional band called the Berger Barns, playing not only those songs that fit easily into this format, like “Cuntry Boner,” but renditions of other Puscifer songs made to fit with the Barns general style of being “anarchist punk country.” Needless to say, I loved this.

This has always been an interesting aspect of Puscifer, as opposed to Maynard’s other bands. There are multiple version of a lot of songs, and remixes. There is a sense of play that runs throughout—which is not to say they aren’t serious. This is serious play, permuting ideas into various forms, combining the visual with the aural, and so on.

The second time I saw them in concert, as they toured for Money Shot, the opening act was Lucha Libre. And it was only after that when I fully realized they had hidden these nuggets in the videos from the album. In “The Remedy” it’s obvious—but what about those wrestlers in “Grand Canyon?”

That silliness, or quirkiness, or absurdity, carries through to this latest song/video from Puscifer: “Apocalyptical.”

Apparently this song was written last summer, which is sort of hard to believe given how relevant its lyrics feels right now:

Go on, moron, ignore the evidence

Skid in, to Armageddon

They won’t believe you

While I’m not sure how to spell it, I do think the “doo dip” is important, by the way. It forms a certain undercurrent of the song, and adds to its dark levity. I should also note the prominence of Carina Round here. She is almost really the lead vocalist on this track, though Maynard’s contributions are equally important. There almost isn’t a verse or a chorus in this song, or you’re not sure which is which. But that is part of what makes it great. Listen to it more than once, or 20 times, and it just keeps growing on you. It goes from one hook to another, without any of them being too catchy. There are certainly bridges, but it almost feels like everything is a bridge, or everything is a chorus, or everything is a verse.

“They won’t believe you until (doo dip) it’s far too late” is definitely the refrain, however, and given when this song came out it is nigh impossible to avoid thinking about COVID-19. The video adds to that, of course, featuring a skateboarder in a hazmat suit, empty streets, and Maynard dancing in front of representations of the virus. 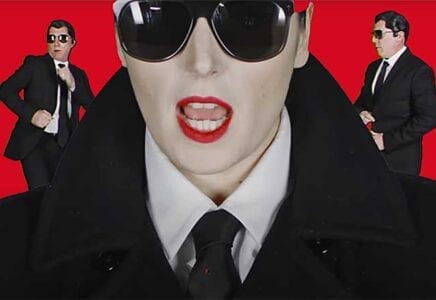 Puscifer has leaned into present times here, but the effect is amazing. Maynard and Carina are dressed like something out of the “Simply Irresistible” video, with dark suits, sunglasses, and very red lipstick. On Maynard, I feel like this makes his mouth feel almost unnaturally small as he whisper-sings “go on, moron, ignore the evidence.” Carina Round is presented powerfully as she tells us “they won’t believe you until it’s far too late.” Three Maynards dance in the background, and his face is intercut at just the right moments with a look on it that reminds me of when he eats an egg at the end of Puscifer’s “Bohemian Rhapsody” video. And then the video ends with the skateboarder in a hazmat suit rolling up on a more business-like Maynard, who hands him a roll of toilet paper.

The whole thing is just hilarious and cathartic in a certain way. You look at the world in the time of coronavirus and worry. People are talking about “reopening the economy” but that might just lead to more death and everything getting worse. Things feel pretty apocalyptical.

Puscifer is offering some dark comedy with this video/song, but I’m there for it. And there is a note of optimism at the end—not really in the video, but as a tag to it: the promise of a new album and world tour in 2021. So maybe their view isn’t as apocalyptical as it might seem at the end of the day. One can only hope.